When I do most Forgotten New York webpages, there’s usually a ready resource of publications, periodicals and newspapers, both out of print and in, through which I get my information. But when I do pages devoted to alleys–a subject of particular interest for me–I often have to resort to guesses and hunches about the backgrounds and origins of these odd cul de sacs and dead ends. Often, an alley will tell the observer a great deal about the neighborhood in which it’s situated.

This time, we’ll take a look at the alleys in western Brooklyn, which encompasses the neighborhoods of Sunset Park and Bay Ridge. These are old sections of Brooklyn that were first a part of the town of New Utrecht. When Giovanni Verrazano sailed into New York Harbor, he passed by what was to become Bay Ridge on the Brooklyn side, and what would be Rosebank and Tompkinsville on the Staten Island side. Verrazano was later captured and cannibalized by Indians, but he was the first European to see the territory. He is remembered by a bridge that I saw get built and by a Manhattan street that never existed. Bay Ridge is full of little dead ends, old and new.

Roosevelt and Woodrow Courts are directly opposite each other on 30th Street just west of 5th Avenue near Greenwood Cemetery, in a quiet area that’s not quite Park Slope, and not quite Sunset Park. Both courts are probably the fruits of a real estate development in the 1920s and took the names of the two more successful Presidents of the previous two decades. There once were other small alleys in this area with names like DeGaray Court, but they are long gone.

Hamilton and Lafayette Walks, on 94th Street west of 4th Avenue in Bay Ridge, are similar in concept and execution to Woodrow and Roosevelt Courts. Small, tidy brick buildings set off the side street.

Lafayette Walk still boasted an old black and white Brooklyn street sign in 1999, but no longer does.

Colonial Gardens, at Narrows Avenue and Shore Road, is similar to the above alleys in that it was a real estate development, probably from the 1920s when apartment buildings replaced many of the old mansions and estates that lined Shore Road beginning in the late 1800s.

Jackson Court, on 101st Street east of 4th Avenue, features on-site parking but is rather nondescript except for a handsome red brick wall with a couple of attached faux gas lamps at the end of the street. It’s rather nondescript, of course, unless you happen to live on the street…

…Because if you do live on Jackson Court, you have direct access to one of the more beautiful small parks in New York City, which is alternately called Fort Hamilton Park, Cannonball Park, or John Paul Jones Park. The sun sets behind the Verrazano Bridge here every evening.

The large cannon, a Rodman gun, is a relic from the Civil War. It had originally been placed for unsuccessful testing in Fort Hamilton, just down the block.

Though the maps say that 78th Street runs all the way from Shore Road through Bay Ridge and Bensonhurst to Stillwell Avenue, this small piece of it is a cul de sac on Shore Road. Residents of this part of 78th Street get to see the Narrows when leaving their houses.

Shore Court is a very short alley on 89th Street near Narrows Avenue. A notable feature of Shore Court is that its original paving blocks have been kept in place.

We’re getting into some primo real estate here. There’s a short lane called Harbor View Terrace that runs between 80th and 82nd Streets just east of Shore Road. On Harbor View Terrace there are two short lanes, Harbor Lane and Colonial Court, and at the end of Colonial Court, you’ll find a hidden street called Westerly Lane, that the official maps don’t recognize. Westerly Lane residents would probably rather you don’t know about it either. But this is Forgotten NY. 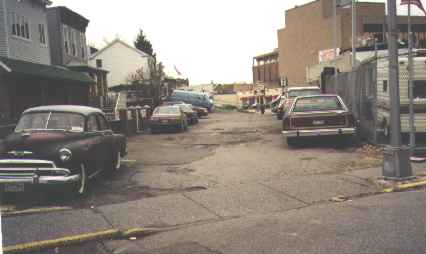 Who knows, maybe that 1952 Chevy has been there since it was built!

Consulting a map of Bay Ridge from the 1890s, you find that Forest Place was there even then. It’s one of the oldest streets in the neighborhood, and quite possibly, in Brooklyn itself.

This part of Bay Ridge is the oldest part. Small, odd homes in the area attest to its antiquity. Though 4th Avenue today is pretty much a collection of used car dealers, car washes and collision joints, Forest Place is still there. It owes its existence to its two remaining homes at #38 and #40.

It has been cut back for many decades, on both its north and south sides, to the short section between 4th Avenue and 90th Street. The two homes were remodeled in the early 2000s and now have the unfortunate patina that recent renovations bring in Brooklyn.

Like Forest Place, Kouwenhoven Lane, on 5th Avenue and Senator Street, is a historic remnant.

Named for a prominent Dutch landowning family in the town of New Utrecht, Kouwenhoven Lane once zigzagged from here north, east and north again into what is now Borough Park. Only this small piece remains.

At right, the Lief tavern’s name is a remainder of the days when Bay Ridge was home to Danes, Norwegians and Swedes.

Wogan Terrace is a Tudor-filled cul-de-sac on 94th Street between 5th Avenue and Fort Hamilton Parkway.

Barwell Terrace is a pedestrian-only cul de sac between 3rd and 4th Avenues on 97th Street.

Non-identical twin alleys on 72nd Street between 3rd and 4th Avenues, Ridge and Bennett Courts once led to an ancient pool.

Ridge Place is the longest of the two and has normal street paving, while…

Bennett Court has been allowed to retain its original rich red-brick pavement.

Notable for its retention of 1950s porcelain street signs, Bay Cliff Terrace, on 68th Street near Colonial Road, is another charming Bay Ridge cul-de-sac. [Unfortunately, these relics have since been replaced.]

Tabor Court is an alley tucked between 12th and 13th Avenues and between 62nd and 63rd Streets. I have no idea what the unusual name is all about (perhaps the developer) but when I was a kid, there was a Japanese anime show called Eighth Man, a humanlike robot that was the 8th creation of its scientist mentor. His name was Tobor, robot spelled backward.

The following two alleys were created by the construction of the Gowanus Expressway through Bay Ridge and opened in 1964, when the expressway did.

Dyker Place runs along the east side of the Gowanus Expressway from 82nd south to 85th Street.

Eirik Place runs between 6th and 7th Avenues along the curving Gowanus Expressway as it becomes elevated from an open cut. Likely named for Norwegian explorer Eric the Red, as Bay Ridge was largely a Scandinavian enclave until the 1960s.

Obscure Harbor Court can be found between 98th and 99th west of Marine Avenue. 98th Street is an alley itself; it’s the shortest of Brooklyn’s non-directional numbered Streets.