Joe Friedman, who wrote the excellent Inside New York: Discovering the Classic Interiors of New York, describes Brooklyn’s Williamsburgh Savings Bank Building on Ashland and Hanson Place as ‘the tallest and most Priapic commercial building in Brooklyn.’

Pause while I let you look up ‘priapic’. 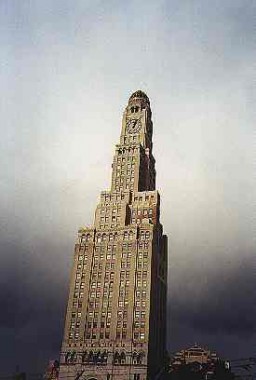 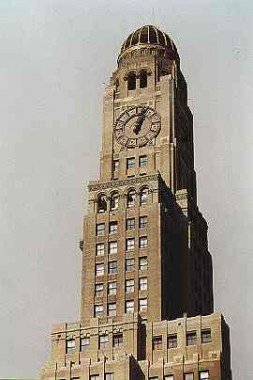 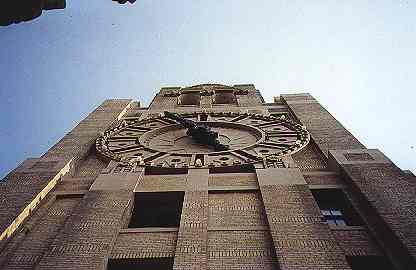 The ‘Willie’ was built by the architectural firm Halsey, McCormack and Helmer from 1927-1929. It is 512 feet tall, and can be seen from Brooklyn housetops as far away as Bay Ridge and Dyker Heights. It is the tallest building in Brooklyn and one of the two tallest buildings on Long Island. Its four-faced clock was the largest in the world in 1929, and held the title until 1962, when it was surpassed by the clocks on the Allen Bradley Building in Milwaukee. The ground-floor banking room boasts a 63-foot ceiling, and windows overlooking Hanson Place are 40 feet high.

The crowning dome was built as a homage to the other Brooklyn Williamsburgh Bank building, on Broadway in Williamsburg (the bank has an h, the neighborhood does not). Since 1987, the two buildings have been a part of the Republic National Bank and subsequently, the Hong Kong Shanghai Banking Corporation.

From Seth Robbins and Robert Neuwirth’s Time Out New York article of April 22, 1999:

Once upon a time, in the swellest city around, a guy could take a date to the tops of the jazziest roosts in the burg. You might impress her at the 500-foot high hangout overlooking Times Square. Or you could snag lunch and sit atop your pick of four slick spires way downtown. You could even walk into uptown buildings so fancy you felt like Croesus himself, catch an elevator and walk outside a thousand feet up, the whole never-sleepin’ shebang at your feet.

This was New York during the golden age of public observation decks. In the 1880s, nearly all of our highest towers’ tops were open top the public; by the 1930s, there were 11 skyscraping public observation decks. Higher than 800 feet were the downtown decks at 22 William Street, 70 Pine Street and 40 Wall Street. Almost as high was the deck at the Woolworth Building, the “Cathedral of Commerce”. Times Square had the Paramount, the corner of 42nd and Lex flaunted both the Chrysler and the Chanin. And who could forget the RCA, the Empire State and Riverside Church’s tower? Even Brooklyn weighed in, with the highest structure between Manhattan and Paris, the Williamsburgh Savings Bank Tower.

While no one was looking, though, New York’s once-public skies were gradually declared off-limits. Only the Empire State Building, 2 World Trade Center and Riverside Church (Sundays only) are open now. And while glorious, they are reminders of all lost panoramas. 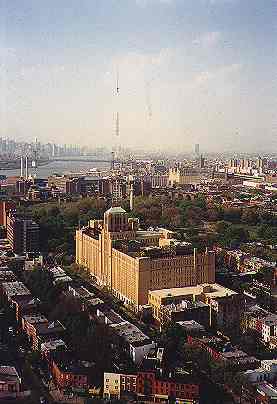 While the Williamsburgh Savings Bank was the tallest building in Brooklyn until the opening of the Brooklyner Tower, it wasn’t the tallest structure. That distinction went to the 597-foot tall radio/TV tower at Brooklyn Tech High School on Fort Greene Place (foreground).

Beyond Brooklyn Tech can be seen Fort Greene Park and the Williamsburg Bridge.

The tall, white column seen just below the radio tower in the center of the picture is the 1908 Prison Ship Martyr’s Monument, designed by McKim, Mead and White. It was erected in honor of the over 11,000 Americans who died in eleven British prison ships anchored in Wallabout Bay (where the Navy Yard is now) between 1776 and 1783. Remains of the prisoners were still washing up on the shore well into the 1800s. 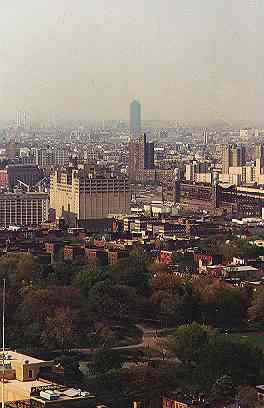 This closeup shot of the same scene emphasizes the Citibank Tower in Long Island City. The 45-story building on Jackson Avenue can be seen at ground level from as far away as downtown Brooklyn and indeed from most points around the city. 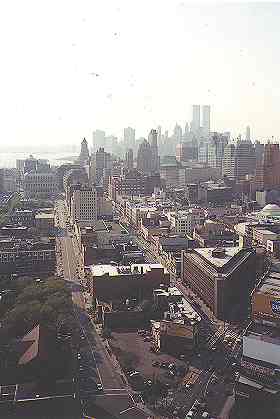 Brooklyn’s downtown towers are in the foreground, Manhattan’s in the background. The most recognizable structures are the twin World Trade Center towers. The V at the bottom of the shot is Flatbush Avenue on the right and Schermerhorn Street on the left.

The red brick building at the bottom left is the 1894 Baptist Temple. The confluence of Flatbush, Lafayette and Third Avenues is known as Temple Square.

The dome at the extreme right is the Dime Savings Bank on DeKalb Avenue and Fulton Street. It was built in a Greek Temple revival style in 1907. A visit to its lobby is a highlight of any shopping trip to the Fulton Mall. Look for the giant Mercury dimes at the top of the Corinthian columns! 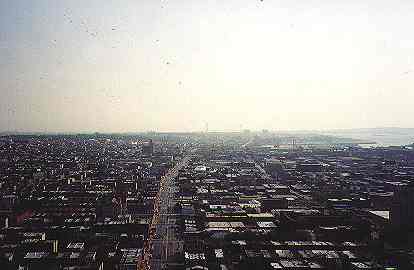 Fourth Avenue, the link from downtown to Sunset Park and Bay Ridge, stretches off into the distance.

In that distance, through the haze on a hot sticky May day, can be seen the Verrazano-Narrows Bridge, there since 1964. On the right is Upper New York Bay. 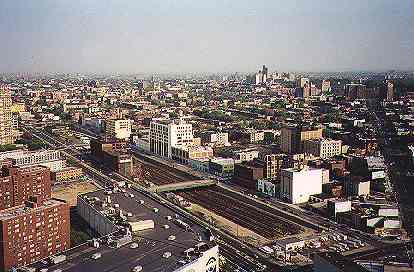 The Long Island Rail Road has seen service from downtown Brooklyn to eastern Long Island since 1834. This is a large LIRR train yard between Flatbush and Vanderbilt Avenues along Atlantic Ave. The reverse-L-shaped building in the foreground is the new Atlantic Commons shopping center which opened in 1995. Pacific Street, to the north of the trainyard, featured a New York Daily News printing plant until the 1980s.

On the right, Flatbush Avenue marches southeast to Grand Army Plaza, the patch of green in the upper right.

Until the end of the 1970s, the area directly to the east of the Long Island Railroad terminal along Atlantic Avenue was devoted mainly to meatpacking businesses and slaughterhouses. These have vanished now, and the area is being converted to residential and commercial purposes, as new buildings are springing up along Atlantic Avenue and the streets north of it.

In 2012 the Barclays Center, home of the Brooklyn Nets, was under construction in the foreground. A furious battle between developer Bruce Ratner and residents of the buildings displaced by the Atlantic Yards project was waged for years.

Above photos by Doug Douglass. 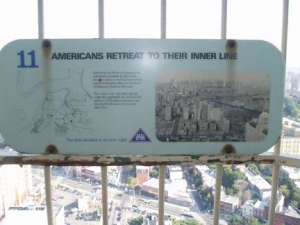 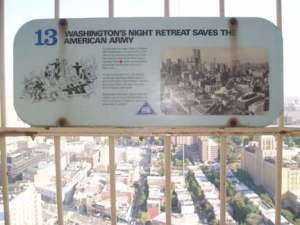 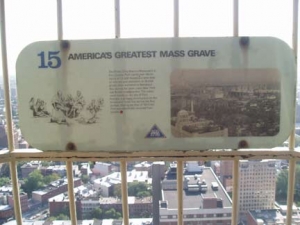 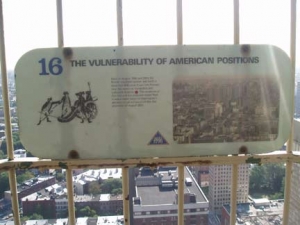 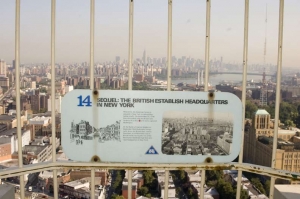 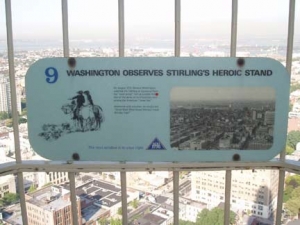 The bank tower was converted to pricey residences in the late 2000s. The building’s observation deck, with historic vistas denoted by these plaques dating to 1976, is no longer open to the public but still there. Photos: Moses Gates/Mike Epstein

I often have nostalgic feelings about my hometown of Brooklyn, but every time I’ve visited recently, I’ve been sorely disappointed. The interlopers have ruined it.
I shall savor my pleasant memories, but sadly l will never return.