Though Your Webmaster has resided in Flushing since 1993, I hadn’t yet taken advantage of its many historical dwellings and locales, many of which are unknown by Flushing’s thousands of residents. On a hot, humid June afternoon, a couple dozen Forgotten Fans and I decided to remedy the situation… 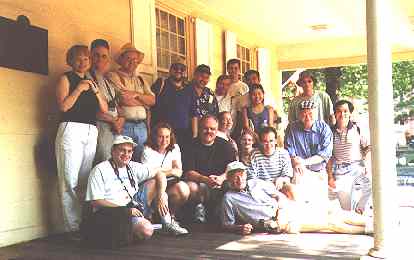 No, this is not the next batch of “Survivor” contestants, it’s a curious group of Forgottoners gathered on the porch of the 1790 Kingsland Homestead (see below) 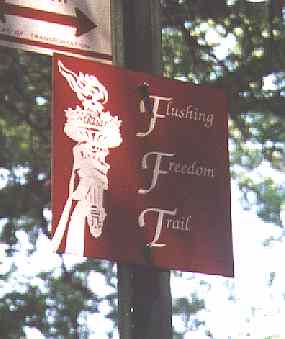 About 20 years ago, the Flushing Freedom Trail was designated and marked with a red line on the sidewalk and signs like this one. Though the trail markers don’t exist anymore, Forgottoners Tour #6 more or less approximated the route. 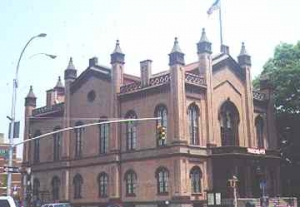 The Flushing Town Hall, constructed in 1862 by a local carpenter, is an example of Romanesque Revival. It served as town hall before Flushing became a part of Queens and then a part of New York City, then became a municipal courthouse, and is currently the seat of the Flushing Council on Culture and the Arts. It was magnificently restored in 1995 by the architects Platt Byard Dovell. (When I first moved to Flushing it was a rundown heap protected by chicken wire from the local miscreants).

At right, the view from the Town Hall’s front porch. How many changes have come to Northern Boulevard since 1862?

Town Hall is now a vibrant locale for local arts programs and jazz concerts. From the Town Hall’s official website:

The Flushing Council on Culture & the Arts is proud to welcome you to the Flushing Town Hall. The Council provides a variety of ongoing programs in the performing and visual arts for residents and visitors to Queens, an arts education experience for public school children, parents and teachers, and technical, management and support services to the Council’s individual artists and member organizations. In addition, teacher training workshops,rehearsals, and meetings of cultural and community organizations also take place at Town Hall. In 1999 Flushing Town Hall’s programs and publications served 90,000 metropolitan New York area residents in 1998 and provided performance, teaching and exhibition opportunities for over 200 artists.

And best of all, the air conditioning is glacial, arctic even! 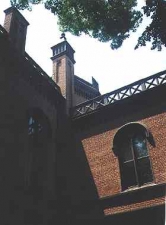 Town Hall’s turrets and parapets serve mute rebuke to the ticky-tack housing that has sprung up in Flushing since the 1960s. The back yard of the Hall is cool and comfortable even on the hottest of days. 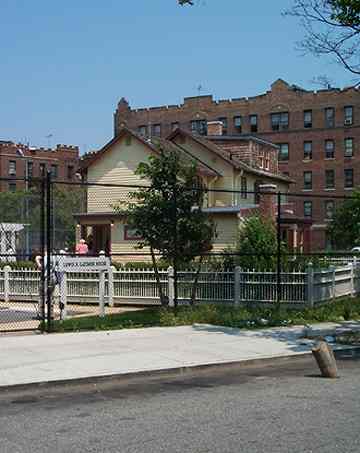 Lewis Latimer, inventor and engineer, was born in 1848 in Massachusetts to parents formerly held in slavery in Virginia. He went on to work in a patent law office, and subsequently discovered he had a knack for invention himself. He assisted Alexander Graham Bell and Thomas Edison, and is best remembered for making the carbon filament, which made Edison’s electric light bulb practical (it had formerly used a bamboo filament, which burned out quickly). He worked with Bell drawing up the blueprints for the telephone.

Latimer also developed the first threaded lightbulb socket and assisted in the installation of New York City’s first electric streetlamps, among many other inventions. 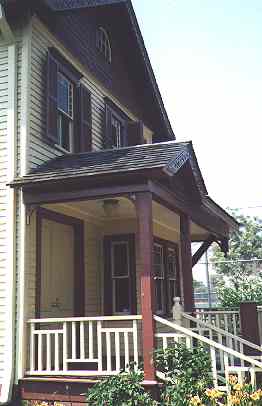 After residing in Brooklyn for a number of years, Latimer moved his family to a small frame house on Holly Avenue in Flushing.

By 1995, the small house, which was in a deteriorating state, was declared a landmark and was later restored to its original condition and moved to a new location at 137th and Leavitt Streets, across the street from the Latimer Houses, which were named for the inventor.

On the day of the tour, we had thought that the house would be closed, but luck was with us and we were greeted by Winifred Latimer Norman, granddaughter of the inventor, and invited in for an open house.

Eventually, the Latimer House will be a museum dedicated to his life, as well as other African-American inventors. 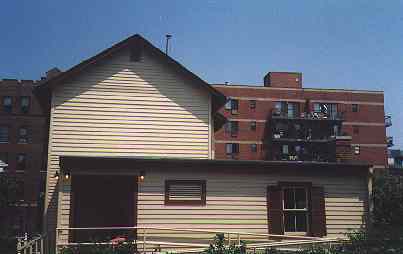 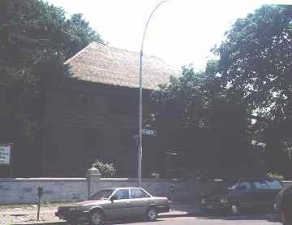 Probably the second oldest building still standing in New York City, the Friends Meetinghouse has been used for Quaker religious services since it was constructed, a span of 306 years.

Not only is the building remarkable for its great age … it also figured in one of the first shots fired in the ongoing war for religious and personal freedom that is being fought even today.

In 1657, the Dutch still were in charge of New Netherland, and Governor Peter Stuyvesant ruled with an intolerant hand. He forbade any religion but the Dutch Reformed Church of his homeland, even for English settlers who were starting to trickle in. Quaker settlers sent a letter to Stuyvesant in that year that has come to be known as the Flushing Remonstrance, that reiterated the settlers’ desire for religious freedom. The document was signed by Flushing’s town clerk and sheriff, who were not Quakers. Nonetheless, they were soon tossed into prison, then summarily fired. Stuyvesant was successful in repressing the Quakers for another five years, until he came up against a man named John Bowne (see below). 37 years after the Flushing Remonstrance was presented to Stuyvesant, this meetinghouse was raised. 306 years later, it is still used for Quaker services. 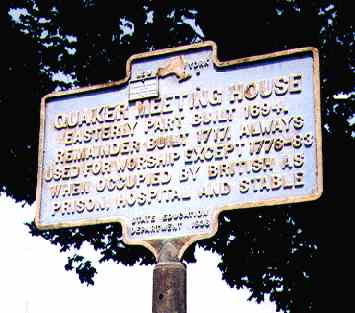 The Meetinghouse is private property and can only be entered by the public during hours when services are being held. So, it was closed by the time the Forgottoners Tour arrived.

The sign outside the Meetinghouse could almost be called a landmark in its own right, since it has stood here sine 1936! 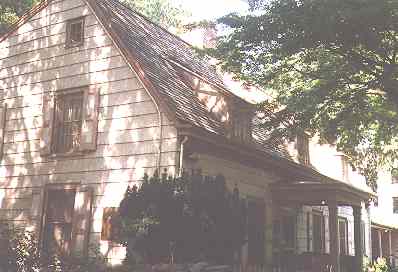 Bowne House was built in 1661 by English settlerJohn Bowne and, unlike many other colonial houses from the 17th and 18th centuries, it still looks a great deal like it did when it was built (though a coat of paint wouldn’t hurt).

Peter Stuyvesant, continuing his reign of terror against religious dissenters, had Bowne arrested in 1662. Though Bowne was not a Quaker, his wife was. Before the construction of the Friends Meetinghouse, Bowne’s house was the primary site for Quaker services. Sentenced to pay a hefty fine, Bowne refused and was jailed; he was subsequently exiled to Holland.

While he was there, Stuyvesant’s bosses at the Dutch West India Company reversed Stuyvesant’s non-tolerant policy, claiming that the colony needed many immigrants to ensure economic expansion, no matter what faith they were. Bowne returned home to Flushing in 1664; the British sailed into New Netherland five months later, and Stuyvesant surrendered without a shot being fired. 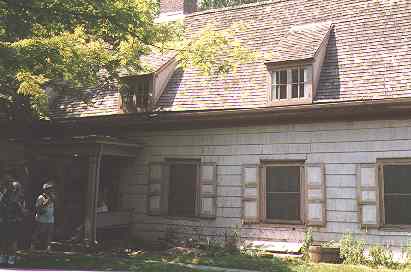 Unfortunately, the Forgottoners struck out again while trying to actually get inside. Though a sign says the Bowne House is open Sunday afternoons from 2:30 to 4:30, we found that the docent hadn’t shown up by 3:30 that day–and were shooed off the property by a security guard who claimed that renovations made it dangerous to be on the grounds.

‘Twould be nice if they got their stuff together at this 339-year-old building, which needs to be shored up and painted. 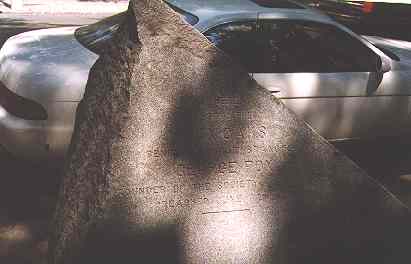 Flushing’s history will always be intertwined with plants. Horticulturalist Robert Prince planted fruit trees in 1737 and subsequently ran a huge plant nursery that was visited by George Washington. Flushing remained green well into the 20th century; even its street naming system (Ash, Beech, Cherry etc.) is a legacy of the green past.

The Quakers had a history with plants as well. At this stone, on Bowne Street opposite the Bowne House…

“Here stood the Fox Oaks, beneath whose branches George Fox, founder of the Society of Friends, preached June 7, 1672.” 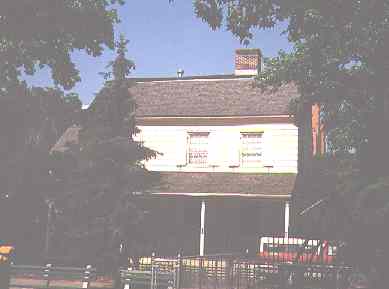 Amazingly, though Flushing can claim two buildings from the 17th century, it can only claim one from the 18th!

The Kingsland Homestead has been located in three separate sites since its construction about 1790. Before 1968 it was located at Northern Blvd. and 155th Street, where it was starting to become rundown. The Queens Historical Society had it moved to its present location in Bowne Park, and the Society is housed in the homestead now. 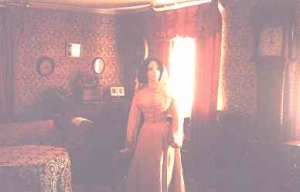 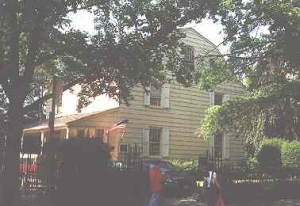 Quaker Joseph Doughty constructed this building at about 1785-1790. It is named for his son-in-law, sea captain Joseph King, who bought it in 1802.

It was occupied by the Murray family well into the 20th Century. The interior of the homestead has been preserved pretty much as it was in the 19th century, and a public exhibit by the Queens Historical Society occupies much of the first floor. 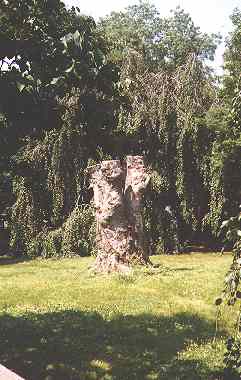 Stump of the Weeping Beech Tree, adjacent to Kingsland Homestead

One of two living NYC landmarks until its 1998 death, the Weeping Beech Tree was planted in 1847 by Samuel Parsons, owner of one of Flushing’s large plant nurseries. The shoot was acquired in Belgium. All weeping beech trees in the USA are descended from this one. Though it died and was cut down in 1998, its daughters are still found fronting its remains.

And last but not least…

Nancy Reagan, neé Davis, was born in this house on Roosevelt Avenue, then called Amity Street, in 1917. Nancy apparently now does not acknowledge her Flushing roots–but she is a daughter of Flushing.

The building is one of the few frame dwellings left on Roosevelt; like much of Flushing, frame and wooden houses were razed for apartment buildings and projects decades ago.

Though most of these sites have made the guidebooks, Flushing isn’t up there with Boston and Philly when historical areas crucial to America’s development are discussed. It should be! 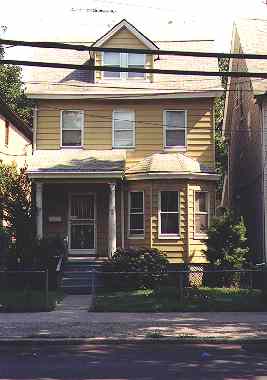 Do you know who is responsible for the maintenance of Lippmann Arcade?