On street corners throughout the city you’ll find these unpreposessing little structures built to release the miasmic vapors from underground wells, subway stations, and secret lairs of megalomaniacal madmen. This, Forgotten Fans, is their story.

So the next time you have a coughing or sneezing fit, think of where you caught the irritation. 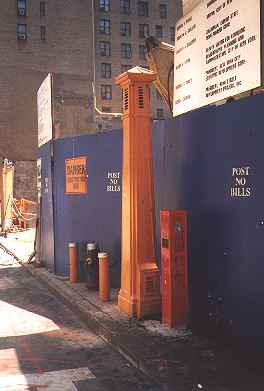 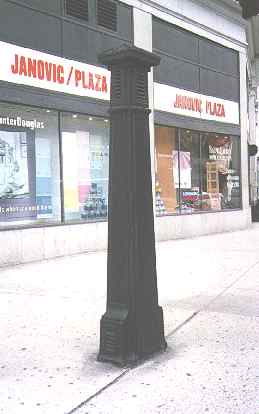 I spoke to Clyde Marinara, who headed the NYC Department of Ventilation between 1955 and 1972, and he remembered the first Wildebeest he ever installed:

“Well, we were trying to release underground gases as quickly and safely as possible, and, noting that they based Penn Station on the Roman Baths of Caracalla, we decided to base our new model on the actual outhouse design we found on the original blueprints of Mount Vernon. Things panned out rather nicely, as you can see.”

Marinara: “Orange is the preferred color on all our Wildebeests.” 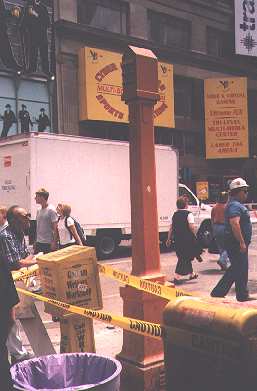 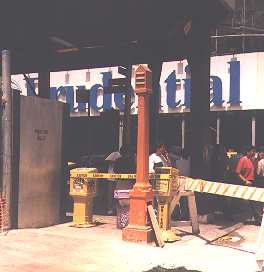 Marinara: “Well, these incredible designs predated my tenure with the NYDV. Actually, I have no idea who’s responsible for these, but I do know that this orange one at 42nd and 7th spurred the revitalization of Times Square. Giuliani took one look at it and realized that he had to get rid of the whores and drunks and bring in something that would do this beautiful vent justice.”

2003: This Okapi has succumbed to Times Square’s endless renovations. 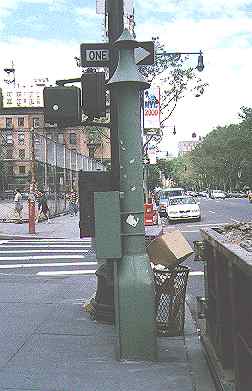 Marinara: “In the Fifties, air raid sirens were all the rage. The Russians had acquired The Bomb and we thought we would be blasted to kingdom come just about once a lunch hour. We installed air raid sirens on every fifth lamppost. Well, hell, wouldn’t it be a kick to make a combination air raid siren/ventilation shaft? Jeez, industrial design had been hip and happening since that Le Corbusier fella. Anyway, we put dozens of these puppies out there. Hey, did you have to shoot a picture of one with all that trash all over it?

Marinara:“Well, we had this mammal theme going but the thing had fins.”

Marinara: “Even we have our failures, and this clearly inferior design was one of them.”

FNY: If it’s so inferior why did you go with this design?

Marinara (bristling): “For God’s sake. I’ve seen your website and it’s full of amateurish, half-baked ruminations on how everything was better years ago. I’ve never criticized your work, though it richly deserves opprobrium. Can we change the subject?” 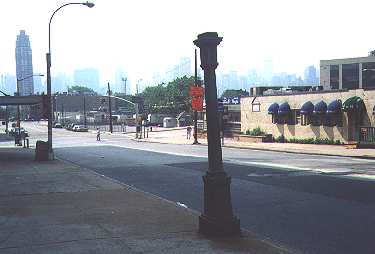 Marinara: “Actually we modeled it closely after the gorgeous Okapi (see above) but with an even more redundantly complicated vent structure at the top of the shaft. Sort of a blunder, really. After the Giraffe, we decided to go a completely different direction and modernize.” 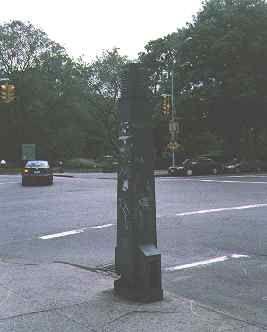 Marinara: “With this puppy we were trying to make a statement, and that statement was: you gotta streamline. While the I8U2-236a looks a heckuva lot like the GNX-1141a, you’ll notice that we removed the hat. The I8U2-236a came along right after John Fitzgerald Kennedy assumed office, and you’ll notice that when he removed his hat, the rest of the country did too. We thought our ventilation units should follow fashion as well as function. You should see what we came up with when the Beatles came along.” 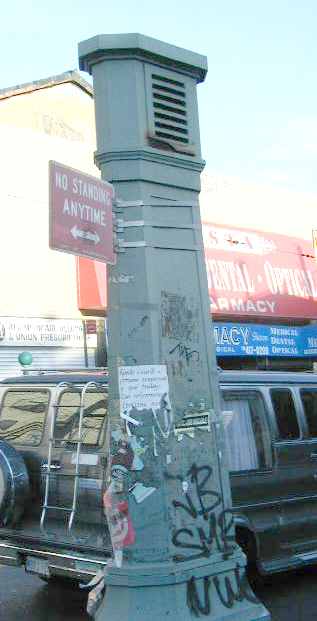 Marinara: “It’s stout-bodied, strong and sturdy and if you attack it, it’ll fight back with lethal results.” 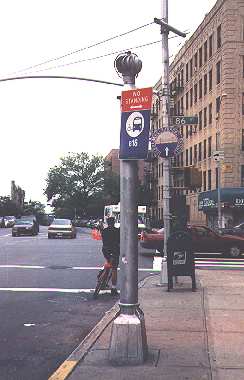 Marinara: “Our only rotating-top vent. Other companies do 180-degree rotations, but here in New York City, we do full 360 degree rotation. No other vent in the world can do it.” 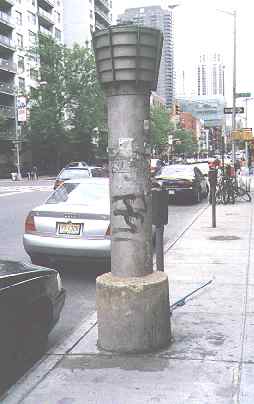 FNY: A massive piece of work. A gargantuan edifice. A statement of timeless solidity, meant to stand for a millennium.

Marinara: “The work of decades of canine and human ejecta on our ventilation units was ruining the finish and subjecting our subway workers, molemen and underground toilers to malodorous, deforming, ichorous assaults to their olfactory bulbs. What was imperative was to provide a unit impervious to such assaults. With The Percheron, we believe we have just such a structure. The FRBL XL-5 also doubles as a dandy way to post neighborhood notices for lost cats and tai chi classes, granting any neighborhood it is installed in an intimate, small-town ambience.” 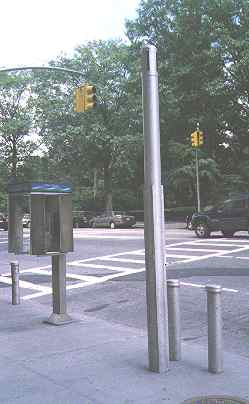 Forgotten NY: This is a radical design departure. Much more streamlined…some would say, to be frank, phallic or priapic, even.

FNY: Didn’t you depart from your mammal theme here? 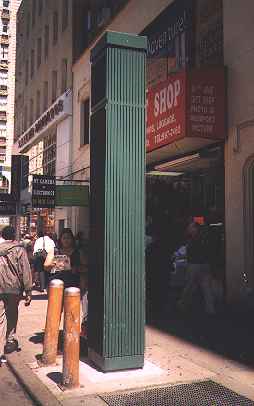 Marinara: “Green is the color of the future; by 2015, everything will be green.” 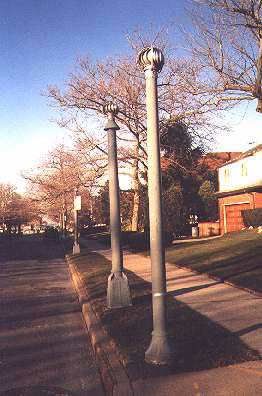 Forgotten NY: Doesn’t this look a lot like the Ocelot?

Marinara: “Look, who’s the designer here? Who’s been working in ventilation for over 40 years? What do YOU do?”

Marinara: “You know what? I don’t think we really have to continue with this. I have to talk to people who know at least a little about the subject matter at hand.”

With that, Marinara stomped into the nearest subway entrance, leaving your webmaster in a confused, spluttering haze.

A humorous exchange like this could be expected when speaking to someone named Clyde Marinara.

Hold on now!!! Now that I ponder this article…the NYC D of V? Really? lol.

very possibly from DAR “Department of Air Resources” who inspected low pressure boilers etc. ,back in the day.

SUCH clever wording and esoteric jargon here. Such ‘smart’, chic
and with-it writers — I hope at least they impressed themselves —

OK, is “Clyde Marinara” a real person? Because his comebacks to the FNY person sound very scripted. Which is a perfectly fine comic technique, but still.

Very interesting & informative. Didn’t know there was such a dept in nyc. Wonderful to delve in the past, u can learn alot. Much appreciative txs for info.TC

On the record…I was being facetious about that department 🙂