Before it was Tribeca, it was the Lower West Side…and it had a lot of cast-iron lamps. Take a look at a former woebegone area. We’ll talk about the coelacanth and H.R. Giger, too.

The photo in the title card, from Danny Lyon’s indispensible The Destruction of Lower Manhattan, shows the intersection of Washington and Chambers Streets. Everything in the photo — roads, buildings, and the cast iron lamppost — have been torn down; where the photographer stands is now a public school, and directly ahead is now occupied by Washington Square Park. I suppose the Washington market area is cognate to Boston’s Scollay Square neighborhood — an entire neighborhood removed for urban renewal.

Long before there even was a Tribeca (the Triangle Below Canal Street) there was the Lower West Side, and in the Lower West Side there was the city’s main produce market, known as the Washington Market. A quirk of fate allowed the skeletal remains of the streets where Washington Market used to be– as well as a cache of extremely old castiron lampposts–to remain in place 20 years after their contemporaries had long vanished, like the coelacanth of Indonesia, still swimming 400 million years after its brother fish had disappeared. 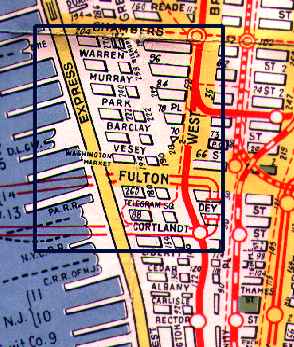 In the late 1960s, though, the entire character of the Lower West Side was to change irrevocably when plans were announced to build the world’s tallest buildings, and the Washington Market’s fate was sealed by the time the Twin Towers opened in 1972 and 1973. What remained of the Washington Market was razed, leaving a deserted no-man’s land that existed north of Vesey Street and west of Greenwich Street that persisted until the 1980s. 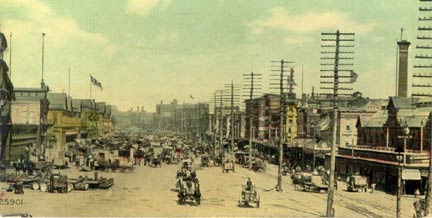 The old produce Washington Market (in this view ca, 1900) was located between Fulton and Chambers Streets on the south and north, and between about Church Street and the Hudson River in the east and west. Over the years, the market came to occupy many of the old Federal and Greek Revival houses that were in the area. The Hudson River piers, as well, saw a great deal of commercial use. 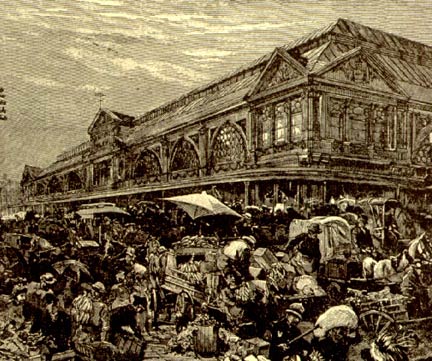 Traffic came to be such a mess in the narrow streets, as seen here, that the West Side (Miller) Highway, named for a Manhattan borough president and spearheaded by Robert Moses, was built in the 1930s. In its day it was a modern marvel, one of the first expressways to be built in New York City.

photos by Michael Harvey from the September 2000 Tribeca Trib

These photos, taken in the early 1970s, show the empty lots where the buildings of the Washington Market used to stand.

The just-closed West Side Highway and the then-active Hudson River piers are at the top.

Artist Michael Harvey, writing in the September 2000 Tribeca Trib, recalls what the area was like in the early 1970s:

By the time I moved to 323 Greenwich Street (across the street from what is now Washington Market Park) … the Twin Towers had just opened and most of the market had moved to Hunt’s Point, leaving a ghost town of vacant lofts, windblown shutters and empty, brick-strewn lots. There was a sprinkling of stragglers left on the streets, mostly egg and cheese man in long white aprons loading trucks through the early morning hours….

…The afternoon streets were eerily quiet and deserted. On a warm day you could hear the whir of traffic on the West Side Highway, yet it remained unobtrusive and seemingly as distant as the giant Colgate clock overlooking the river from New Jersey. Weeds prospered along the sidewalks and where verdant Washington Market Park is now, the bums built shanties and cooked on their campfires.

Detail of a Murray Street Corvington lamp. There are a few differences in the ironwork that set this one apart from other Type 24M’s. One of the many scrollwork variants.

One of the enduring enigmas of the old Washington Market area is the story of 179 West Street, which stood alone after the rest of the neighborhood had been torn down by 1974.

What happened is that planned redevelopment of the area–originally scheduled for the the early 1970s–was slow to get off the drawing board and nothing except the giant Independence Plaza was under way for quite some time. (It would be the mid-80s before very much was built here!)

Sculptor Mardig Kachian occupied a four-room apartment at 179 West. The City went to court to evict him, but in 1970, a Federal judge barred demolition of 179 West “until such time as projects planned for the renewal have been authorized by all appropriate governmental bodies and until such time as sponsors proceed forthwith with the development of the renewal site”.

Development at Warren and West Streets never did proceed forthwith, though. The city cut off Mardig Kachian’s water, but the sculptor got it back with an intercession from the State Supreme Court. They had to run a new water line to the building to accommodate the ruling!

By the 1980s, the renewal project was finally off the ground…but 179 West stood till 2003, while many new buildings had been built around it. I’ve no idea of Kachian’s whereabouts these days; the building appears deserted.

In the August 2000 view at right, 179 West is still standing rather worse for wear. Its brothers have all disappeared. 179 West remained in place until May 2003.

Washington Street and Park Place, about 1970. From the 1975 Dover publication, “Cast-Iron Architecture in New York.”

Washington and Murray, about 1970. From the 1975 Dover publication, “Cast-Iron Architecture in New York.”

Bishop’s Crook lamppost at SE corner of Washington and Warren, as seen in 1978 complete with yellow and black street signs…

…and the pole as it later became,“modernized” with a yellow sodium “bucket light” and green and white street signs.

This is the only Type 6BC “sheriff bishop crook” still in active use. At left, note the typical Siamese Twin fire alarm/lamppost connection that was the norm when these poles were common. That fire alarm has since been replaced with a freestanding one.

2008: This post has been taken down and relocated elsewhere on Warren Street.

Washington Street used to stretch continuously from Battery Place all the way to West 14th Street. It now exists only in fits and starts as far north as Hubert Street, the north side of Independence Plaza, where it begins now.

This small piece of Washington, a dead end leading to a parking lot, is on Warren Street west of Greenwich. It retained its Belgian blocked pavement that it has always had. It, too, was eliminated for an office building in 2008.

The Independence School, constructed in 1988 in Washington Street’s old roadbed, is directly ahead.

LEFT: This is a very interesting transitional photo that shows how the area was changing in the late 1970s. By then, Independence Plaza was open and thriving, on the left side of the photo, but the area to its immediate south was still unoccupied. By the late 1970s, the City had replaced one of the venerable Castirons with modern sodium lighting, but left the one on the other corner alone.

By then the street signs had come down, but this is likely the former corner of Murray and Chambers. This spot is now occupied by a public school.

2nd and 3rd from left: Washington Market Park was opened in 1983. Among other treats it contains remnants salvaged from the old West Side (Miller) Highway.

4th and 5th from left: : The West Side Highway in the mid-1970s. The expressway was closed in 1973 after a truck fell through the roadbed, but wasn’t demolished till the mid-1980s.

Note the plaque at the side of the trestle at the left side of the picture (I realize it’s indistinct). Every cross street on the West Side Highway was marked with a large plaque with a stylized eagle, which also marked the pier that jutted into the Hudson River behind the expressway. When the highway was constructed in the 1930s, the piers were still in very active use.

Warren Street and the West Side Highway, about 1978. Photo: Bob Mulero.

Here are a couple of shots of the Pier 23 eagle plaque in place at West and Harrison Streets back in 1978. Rather H.R. Giger–esque, wouldn’t you say?

3rd from left: here’s that West Side eagle today, on a pedestrian bridge in Independence Plaza west of Greenwich Street, over Harrison Street. Pier 23 no longer exists.

4th from left: Typical Miller highway lamp with telescoping shaft. This one survived till the 1990s at West 72nd Street. 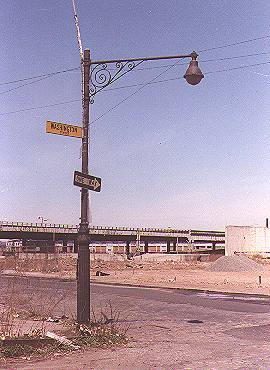 Finally, we’ll mention a very special lamppost that’s completely unlike the type 24M “Corvingtons” we’ve seen earlier on this page. It’s a completely different species bearing no relation to them at all. It was classified as a “Type 6 with 6-foot special arm.” You can see it in the title card photo above.

It should be noted that in the early days of cast-iron lampposts, special short poles were needed that would fit under elevated train lines. This one resembles that design. Since it’s on Washington Street, though, which never had an el (Greenwich Street did) you can cancel that explanation.

What probably happened is this: the Washington Market buildings frequently had awnings that stretched over entire sidewalks. Back in the 1910s or 20s, the city probably installed fixtures that were shorter than, or compensated for, the awnings and this pole was probably one of those.

What’s pretty amazing is that this ancient lamppost and the bombed-out landscape existed on Manhattan streets as late as 1980.

TRIBECA BECKONS. Paint, Paper, Paste and Push…what is it?