Tiny Stuyvesant Street, crossing E. 9th Street between 3rd and 2nd Avenues, is notable for being the one and only diagonal street in Manhattan north of 8th Street and south of Central Park except Broadway. (We’ll leave Greenwich Village out of it, since it’s always had its very own street system quite independent of the gridiron imposed by the Commissioners’ Plan (Randel Survey) back in 1811.) As in most exceptions to the rule, it has its own story to tell!

The focal point of Stuyvesant Street, St. Mark’s-In-The-Bowery, was first built in 1799 on what had been the vast estate of Peter Stuyvesant, the Dutch colonial governor of New Amsterdam. Stuyvesant himself is entombed in the church’s graveyard.

Maps from As You Pass By by Kenneth Dunshee

Peter Stuyvesant’s holdings extended roughly from what is now Cooper Square north to East 23rd Street with the western boundary at the Bowery Road (now called 4th Avenue) and the eastern boundary in a line between what’s now 1st Avenue and Avenue D. 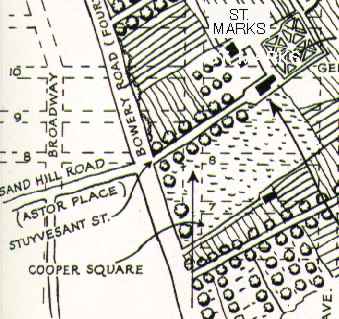 This closeup of the southwest portion of the map shows a narrow lane leading from the Bowery Road northwest to Gov. Stuyvesant’s manor house, which remained with the Stuyvesant family until it burned down in October 1778. His great-grandson Nicholas was the last tenant.

The lane exists today as Stuyvesant Street. But why, and how, did it survive from Peter Stuyvesant’s day?

Stuyvesant Street, at left, angles off from E. 10th Street just west of Second Avenue. Peter Stuyvesant’s mansion was located approximately where the UPS delivery truck is parked on the south side of the street.

In the triangle formed by the two streets stands the renowned Renwick Triangle, built by the renowned architect James Renwick, Jr. in 1861.

Where St. Mark’s now stands, the Second Dutch Reformed Church, of which Peter Stuyvesant was a parishioner, stood in the 1600s. His family vault was placed near that church and remains today besides St. Mark’s.

Petrus Stuyvesant, Peter Stuyvesant’s great-great-grandson, owned most of the land in this area and his mansion, called Petersfield, was located in the block between 1st Avenue, Avenue A, and East 15th and 16th Streets. It was Petrus Stuyvesant who laid out a street system and donated land and construction funds for St. Mark’s, which was completed in 1799. The area around Petersfield, extending west to the old property line at the Bowery Road, became known as Bowery Village in the early years of the 19th Century.

Because Bowery Village lay just outside the city limits, farmers could sell there without paying a market tax. Wagon stands soon flourished along 6th and 7th Streets, along with a weigh scale for Westchester hay merchants. Comfortable residences went up along the upper Bowery (Road), still a country road edged with blackberry bushes…Artisan house-and-shops arrived too; so did groggeries, a brothel, and a post office (in truth an oyster house where the postrider left mail for the village). From 1804 the community even had its own (short-lived) newspaper, the Bowery Republican.
–From Gotham by Edwin Burrows and Mike Wallace

As New York City expanded ever northward as the 19th Century rolled on, Bowery Village was incorporated and most signs of it, with the exception of St. Marks-in-the-Bowery, gradually disappeared. But Stuyvesant Street had by then become a well-established thoroughfare and so was allowed to remain after the Commissioners Plan has eliminated most of the other odd roads that would have interrupted the grid. (For example, Petersfield Street, which extended from the Bowery Road at about 11th Street to the Petersfield mansion, was eliminated when the cross streets of today were cut through.) 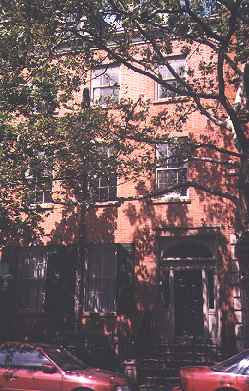 Petrus Stuyvesant built this house at 21 Stuyvesant Street in 1803. It was a wedding gift to his daughter Elizabeth, who married Nicholas Fish, a close friend and political ally of Alexander Hamilton. Son Hamilton Fish became New York State governor, senator, and secretary of state. It is now known as the Stuyvesant-Fish House.

Stuyvesant Street today, despite being so short, makes a fine walk as a gateway from The West to East Villages. St. Marks’ Bookshop, with an eclectic selection of art books, can be found on Third while St. Mark’s, which has become one of the area’s premier art sponsors, is on Second Avenue. There’s plenty of fine architecture in between in this modern day street that defies the grid.

Stuyvesant Street is the last survivor of a village grid that existed prior to the overall street grid adopted in 1811. I have made street signs for the streets included in the grid, which was laid out on Stuyvesant property by Petrus Stuyvesant, great grandson of Peter, in the years following 1788. The streets were named for Petrus’ sons and daughters, with a couple of names thrown in. Only a couple of these streets, Stuyvesant Street most notably, were actually developed.

As You Pass By, Kenneth Dunshee, Holcomb House 1953
Out of print

[…] from East 10th Street, just west of Second Avenue. This mansion remained with the family until it burned down in October 1778. This narrow lane is the Stuyvesant Street we see […]