Years ago, the bustling Brooklyn waterfront,notably in Williamsburg, under the Manhattan Bridge, and Sunset Park, was home to a number of railroads that served busy shipping and freight interests. The past couple of decades, however, have seen active railroads dwindle down to only two. We’ll have a look at a pair of harborside railways on this Forgotten page. 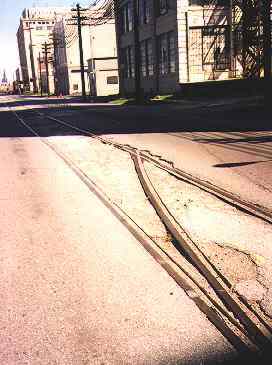 It wasn’t all that long ago that the sight of a freight train rumbling down much-traveled Brooklyn thoroughfares wasn’t an unusual sight.

The South Brooklyn Railway is the NYC Transit Authority’s (now MTA’s) very own freight line; it used to run from the TA’s fright yard at 39th Street and 2nd Avenue west and south to the Coney Island Yards.

The line ran along 2nd Avenue, then shared tracks with the IND/BMT subways in an open cut/tunnel from 4th Avenue to the 9th Ave yards. It then ran at grade under the Culver Line all the way south to the Coney Island Yards, with the SBK running on McDonald Avenue from Cortelyou Road south to beyond Avenue X. 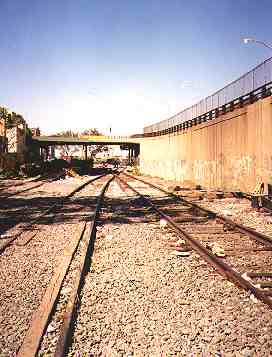 Looking north along the SBK toward the Gowanus Expressway. The 38th Street off ramp is at right.

If they could talk, the SBK tracks would have a lot of stories to tell. According to NYC transit historian/hockey maven Stan Fischler…

The whale got as far as the tunnel south of 4th Avenue, but wouldn’t fit in the tunnel. I suppose they had to ship it to the Aquarium.

–The SBK also hauled a downed Army plane that crashed in Pennsylvania to the Coney Yards and then the pieces were trucked over to Floyd Bennett Field on Flatbush Avenue for an inquiry.

–The SBK did a lot of business with the many Brooklyn breweries that flourished pre-Prohibition. It also did a good business hauling wine grapes for Brooklynites who flouted the law during Prohibition.

The South Brooklyn arose from one of the many different passenger and freight railroads that ran in Brooklyn before subway service arrived in the early 20th Century, the Prospect Park and Coney Island Railroad, which for much of its route ran along Gravesend (now McDonald) Avenue. For part of its route the SBK used trolley tracks on McDonald Avenue, making it the only line associated with the TA that used both subway and trolley tracks. 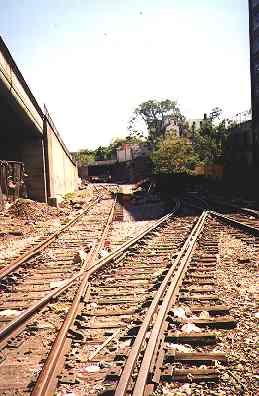 SBK tracks at Third Avenue just north of the merge with the BMT/IND. 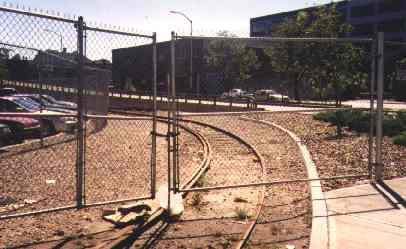 SBK curves from 2nd Avenue beside the Gowanus off-ramp 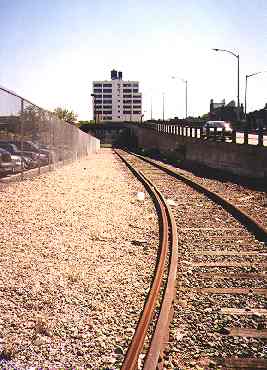 The bread and butter of the SBK in its heyday was the delivery of boxcars from all over North America to businesses that were situated close to the tracks along the Culver right of way. The freight would be floated on barges from Hoboken and then transferred onto cars at the 2nd Ave. yard where SBK locos would pull them to their destinations. 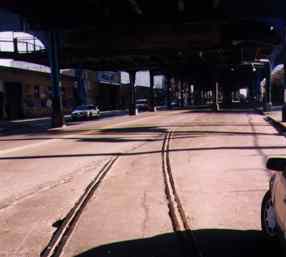 SBK tracks curve from the Culver right-of-way onto McDonald Avenue at Cortelyou Road. 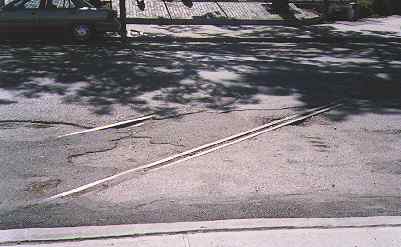 SBK tracks peek through at Cortelyou and Dahill Roads

Business began to wind down for the SBK in the 70s. The final freight runs came in 1978, and while the tracks along 37th Street and McDonald Avenue were visible for years after, they were finally paved over in the 1980s. They do peek out here and there, if you know where to look.

After 1978 the MTA simply had freight operations from the 2nd Ave yard moved onto the elevated B line which also hooks up to the Coney yards.

Unlike the SBK, the Cross Harbor Railroad is still operating freight trains at grade along the streets of Brooklyn. 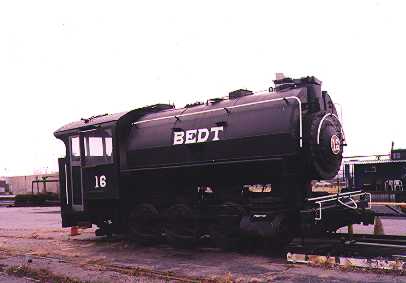 BEDT #16 had worked Brooklyn waterfront freight service until 1963 (by contrast, the last LIRR steamer was retired to museum pasture in 1955).

BEDT #16 was repainted and moved over to the Bush Terminal yard that is run by Cross Harbor RR (I am not sure when this happened — probably around 1996). In Jan. of 1999 CHRR donated the engine to the Railroad Museum of Long Island in Riverhead. Originally the transfer crew was hoping to move #16 out to Riverhead via the easy route of Bay Ridge to Jamaica and then the Greenport LIRR line out east. Unfortunately, they discovered that the steam engine would not clear the third rail at Jamaica. So, it was flatbedded out to Riverhead. Caboose in the CHRR yard. 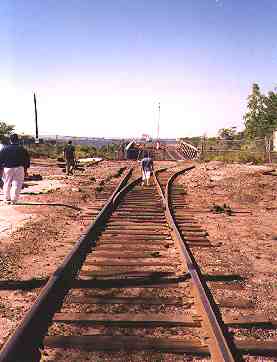 The New York Cross Harbor Railroad provides New York with a vital rail freight link to the rest of the North American rail system using a small fleet of carfloats. This cross-harbor route eliminates the need to run over 280 extra miles up the Hudson River and then over down the Hudson line. The NYCH primarily serves Long Island via interchange with the New York and Atlantic Railroad and southern New England via NYA and CSX/CP. 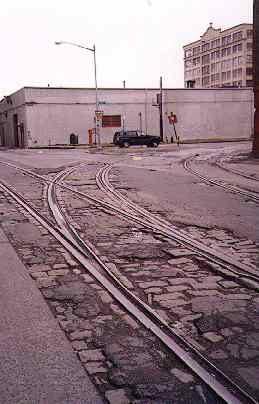 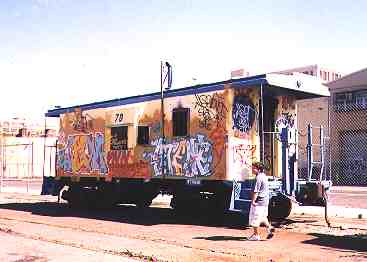 “Decorated” car at the CHRR yard

The NYCH is the result of a consolidation of two Brooklyn waterfront railways. The New York Dock Railway and the Brooklyn Eastern District Terminal (BEDT) merged in 1983 to create the NYCH.

This railroad’s business is primarily moving and interchanging freight cars from New Jersey via carfloats. Although there were once dozens of carfloat bridges along the Brooklyn coast, today only one remains in service. Once tugged over, cars are interchange with either the New York City Transit Authority via the South Brooklyn Railway or the Long Island Railroad freight division (now the New York and Atlantic RR).

The NYCH also moves a good percentage of the nation’s cocoa by floating it from the Brooklyn shipping ports to the mainland. The Cross Harbor also delivers carfloats to various docks around the Brooklyn port area.

In times past, the New York Dock Railway interchanged freight with the New Haven which were responsible for the former electrification of the Bay Ridge freight line.

Interestingly, two carfloat bridges/gantries of the LIRR in Long Island City have been restored an turned into a recreation area called Gantry Plaza State Park. This is near the former BEDT Pidgeon Street Yard which exists no more. CHRR loco and cars at the CHRR yard 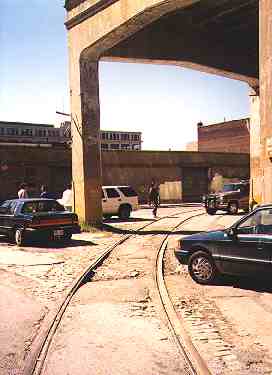 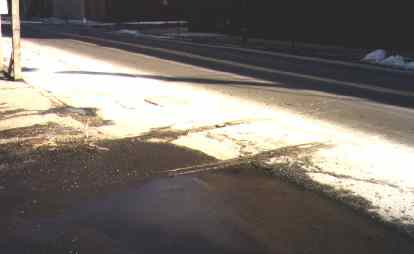 In addition to the SBK and CHRR, another waterfront railway operation was in Williamsburg as little as 10 years ago. These days the only remnant of it is these nearly buried tracks at Kent Avenue near North 5th Street (left). DUMBO (down under the Manhattan and Brooklyn Bridge Overpasses) also has its share of waterfront railroad remnants. Often mistaken for trolley tracks, this waterfront RR’s tracks are on nearly every street under the Manhattan Bridge on the Brooklyn side, such as Main Street. This line was known as the Jay Street Connecting Railroad. It was constructed by the Arbuckle brothers, importers of Yuban Coffee.

Remains of this railroad, which served the Brooklyn docks from Doughty Street south to Joralemon Street, can be seen parallel to Furman Street under the BQE and Brooklyn Heights Promenade. 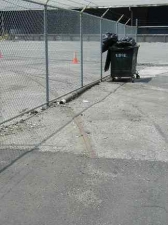 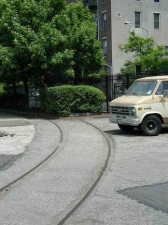 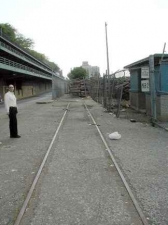 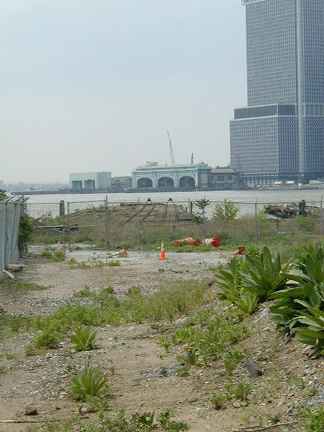 This is the Pierrepont Street carfloat. Across the East River can be seen the Staten Island ferry slip, at left and the Statue of Liberty ferry slip, in the center of the picture.

The Subway: A Trip Through Time on New York’s Rapid Transit, Stan Fischler, 1997 H&M Productions
BUY this book at Amazon.COM