CHANGING OF THE GUARD: Documenting the beginning of the end of the ornate castirons in 1960.

I’ll admit it. There’s a big hole in my information on NYC lamppost manufacturers and makes, since I’ve not a clue of these designs’ actual names, nor their manufacturers. These are the luminaires that were still lurking about NYC when I first began taking note of lampposts back when I was a 4-eyed fat kid being duly bullied in grade school in the Swinging Sixties.

At any rate, lamppost maven Jeff Saltzman (link below at Bell) has graciously bestowed monikers on these designs, at least till I can discover what they’re actually called…

the ACORN (early 1920s-early 60s)
(None are extant on public streets now, though collectors have some of them)

“Forgive them, they know not what they do.”

Many urban chroniclers speak of the shame of the 1964 destruction of Penn Station, as the 1910 Beaux Arts masterpiece fell to the wrecker’s ball.

At the risk of scourging a deceased equine, at Forgotten NY we’d point to a rather more mundane massacre that was occurring at about the same time–the wholesale sacrifice of the ornate castiron lampposts that first appeared about 1892 and had ruled the streets since the 1910s–as even more symptomatic of the increasingly jejune infrastructural developments of the time.

To put it in less syllables, it wasn’t a very good thing they were doing back then. 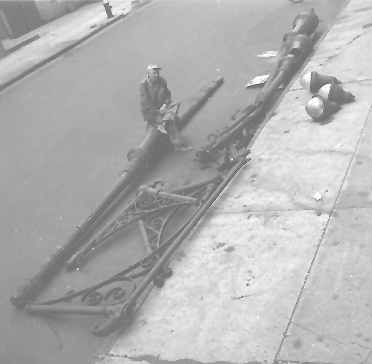 In 1960, a work crew has just dismembered a Type 24M “Corvington” castiron on DeKalb Avenue in Fort Greene. Note the discarded ‘Bell’ and ‘Cup’ luminaires at top right. 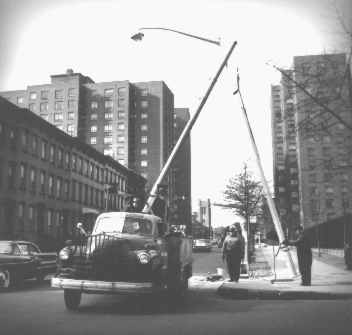 The changing of the guard. Workmen raise new octagonal-shafted poles on Lafayette Avenue in 1960.

These posts had been around since 1950, and had only gradually begun making inroads on the older castiron legions. Around 1960, though, the change started happening in earnest. The rise of the Donald Deskey modular postsa couple of years later sealed all but a few of the castirons’ fate. 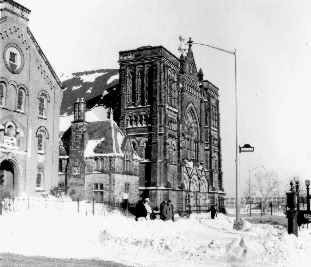 In 1960, the city is still recovering from a wicked snowstorm. The 1887 French Gothic Emmanuel Baptist Church’s battlements groan with a foot of snow on them, at Lafayette Avenue and St. James Place. In 1880, oilman Charles Pratt (of Pratt Institute fame) decided to build his own church, after the pastor of the nearby Washington Avenue Baptist Church started preaching antimonopolistic sentiments. The nerve!

But our interest here lies with the strange, oblong thing on the corner. Why, just a short time before, an ornate “Corvington” longarmed pole had guarded the space. What’s there now? 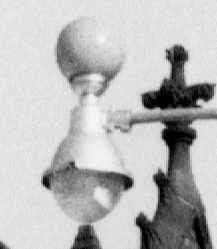 The thing with two heads. In the early days of octagonal-shafted lampposts, designers were in a quandary about what to do with the orange fire-alarm luminaires, which had been mounted on short masts on the old castirons. An early solution was to place them directly over the main luminaire, which produced bizarre combinations like this. Later, the fire alarm luminaires became conical in design, and were placed at the apex of the shaft or on a short unadorned mast on the middle part of the post, as in the castiron days. 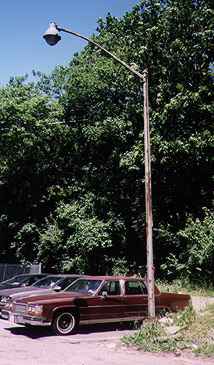 Some of the original wave of octagonal poles, with their Cup luminaires, made it all the way to the end of the 1990s, like this one near Union Turnpike. It’s now been given a modern sodium light, however. 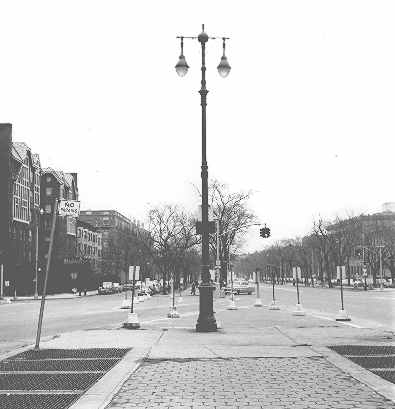 This unusual Eastern Parkway twinlamper survived until the early 1960s. It is crowned by the distinctive Type 3 Twin (an original design made for 5th Avenue at the 1892 Columbian Exposition). Note, also, the elongated glass diffusers. These were variations on the shorter diffusers that were featured with the original ‘cup’ designs from the 1940s.

Eastern Parkway has, in recent years, installed a series of retro-castirons that are an extrapolation of sorts on the park lamp design first created by designer Henry Bacon (who also designed the Lincoln Memorial in Washington) in 1907. 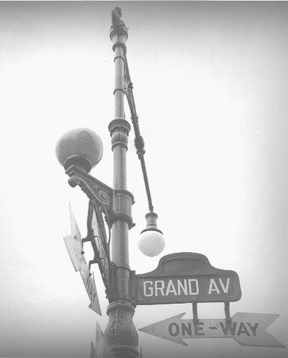 Type 24M Corvington at Brooklyn’s Grand Avenue and Prospect Place, complete with detailed view of the globular fire alarm light with its short mast, humpbacked signage and oldstyle one-way signs. This was one of the relatively few poles that survived until 1960 that kept its old-style “acorn” luminaires from the early 1920s.

All B&W photos by Ron Ziel, from the collection of Lee Rosenzweig and Brian Merlis.