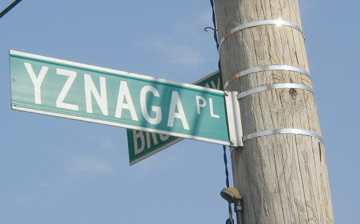 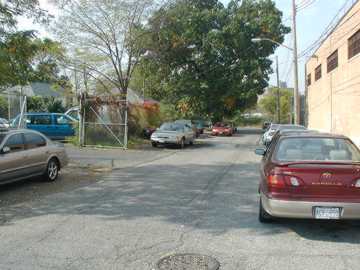 Quite possibly the only place name in the United States that begins with “yz”. I’ve looked at USA and world atlases and can’t find anymore initial Yz’s.

Yznaga Place, at the south end of Brush Avenue near the Whitestone Bridge and Ferry Point Park, is one of those streets you see on the map, say, ‘do they really call it that?’ and then forget about it, since you’ll never find yourself there, unless you live over there. It sounds like one of those crossword puzzle words, like zax, pyx or adz.

Actually, Yznaga, pronounced Is-naga, is a perfectly respectable Spanish name and there are, or were, a number of Yznagas in Cuba, and it’s there that we look to discover the origin of this unusual street name.

Yznaga Place was first mapped in 1898, during the Spanish-American War. It’s possible an American sailor spotted the Yznaga Brothers’ sugar plantation in Cienfuegos, Cuba, with its large YZNAGA sign; the short street could be named for freedom fighter Jose Yznaga, who was inspired by Bolivar to raise an army of liberation against the Spanish…when his effort was unsuccessful, he exiled himself in New York; or for Fernando Yznaga, a friend of the Havemeyers, who owned much of the land in this part of the Bronx.

In any case, the story of Yznaga Place is traceable to Cuba, but there the trail becomes indistinct.

The Yznagas (full name: Yznaga del Valle) were a rich and well-connected Cuban-American family who migrated to Natchez, Mississippi, before the Civil War. For a while they owned Dunleith, a grand Natchez architectural landmark. Later they moved to Paris, and then to New York, where the children of the family (including Fernando, mentioned in your text below) married well. A daughter, Maria Consuelo Yznaga del Valle, became the duchess of Manchester, and was known as Lady Mandeville.

The Yznaga Place street name in the Bronx possibly derives from the Yznaga’s friendship with the Vanderbilt family. It was Consuelo, Lady Mandeville, who introduced her old Natchez friend, the poor but ambitious southern belle Alva Erskine Smith, to her future husband, the very rich William Kissam Vanderbilt. Lady Mandeville also helped to launch the nouveaux riches Vanderbilts into New York high society in 1883.

In gratitude, Alva named her daughter Consuelo (who later became duchess of Marlboro) after her dear friend, Lady Mandeville. As the Vanderbilts controlled most of the ferry and railroad connections around New York in the late 1800s, it would have been gracious token of thanks to name a street after the family which had shown them so much kindness. 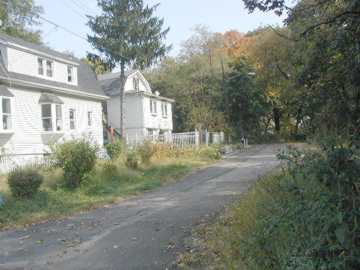 Only its few residents know for sure whether it’s Jay Place or Jay Avenue, but it’s a dead end either way. Located on Brush Avenue north of Yznaga Place.

All five boroughs can boast a Jay Avenue, Place or Street. In many cases, they are named for John Jay, first Chief Justice of the Supreme Court, but it’s unlikely a dead end bordering an empty lot in a relatively remote area of the Bronx would be named for him. Its more likely namesake is Augustus Jay, a Havemeyer crony; the Havemeyers were a prominent NYC family who sent one of their own to City Hall. 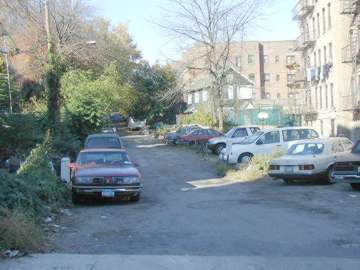 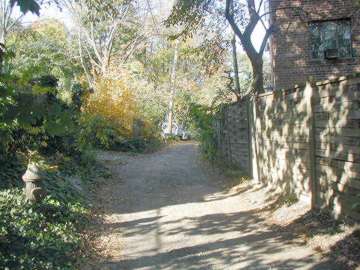 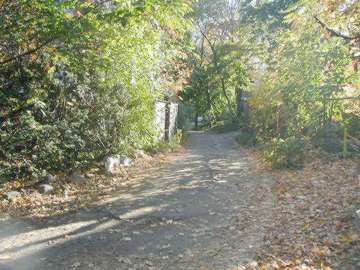 One of the oldest roads in New York State, the Old Albany Post Road is the former route used in the colonial era to bring mail from New York City north to Albany, hence its name. This is a one-block dirt road remnant of the ancient track. The remnant, which is unmarked by the Department of Transportation, runs between West 251st Street and Lakeview Place just west of Broadway.

In the 19th Century, the Old Albany Post Road would be straightened and would become the roads we know today as Post Road, and the much longer Route 9, which encompasses Broadway in NYC and further north, known as the Albany Post Road. Route 9 goes all the way to the Canadian border.

A much longer 6.6-mile dirt remnant of the OAPR remains in upstate Putnam County.

Elsewhere in the Bronx, another colonial post road has survived, almost unrecognizably. Some Yankee fans may wonder why in the world is there a Boston Road in the Bronx?

Boston Road runs from E. 163rd Street and Third Avenue all the way to beyond the Bronx city line, with an interruption for the Bronx Zoo. Beyond that, it becomes Route 1, a.k.a. the Boston Post Road, and indeed will get you all the way to Boston, albeit rather slower than the interstate will.

Both the Albany Post and Boston Post Roads go back before the colonial era; they were originally Indian trails. The BPR was commissioned by the British as far back as the mid-1670s. The Boston Road of today was laid out by the entrepreneur John Coles in 1794. Both were built to facilitate mail delivery.

Manhattan, too, had post roads, but they fell into disuse and were finally de-mapped once the grid street system was laid out in the early 1800s and businesses and homes began to appear along the new streets. 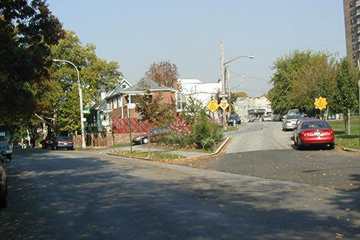 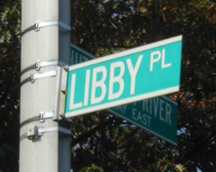 This Libby Place has nothing to do with canned food. Like the Old Albany Post Road, it is a short remnant of a much longer road.

The Pelham Road ran from Westchester Creek (just east of the small town of Westchester which became the area surrounding the present Westchester Square) northeast to the town of Pelham. It ran on the routes of present-day Hutchinson River Parkway, Libby Place, Buhre Avenue, Westchester Avenue and Shore Road.

It ran through Middletown (so named, perhaps, because it was midway from the village of Westchester to the Pelham Bridge) and old Stinardtown, much of which is now Pelham Bay Park.

Libby Place is possibly named for Elizabeth Cornell, a former landowner in the area. It was officially named in 1934.

The current position of Libby Place is shown on this mid-1800s map of Middletown in the northeast Bronx. The ‘Boulevard’ shown on the right is Eastern Boulevard, which became the Bruckner Expressway. ‘Middletown Road’ is still there today. 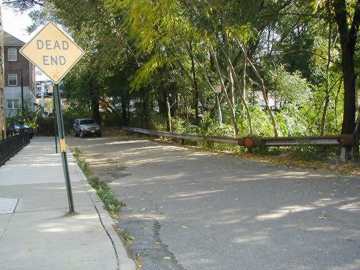 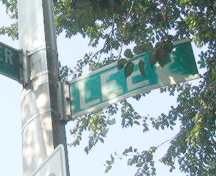 Francis Lightfoot Lee, a signer of the Declaration, is remembered by Brooklyn’s Lee Avenue in Williamsburg. Though many Bronx streets are named for former NYC mayors, Gideon Lee (1833-34) is likely not one of them.

Lee Street, wedged between the Hutchinson River Parkway and the elevated IRT along Westchester Avenue, is on a former battle site of the British and Hessian forces vs. patriots during the Revolution. The patriots were led by General Charles Lee; it’s a possibility this very short alley remembers him. 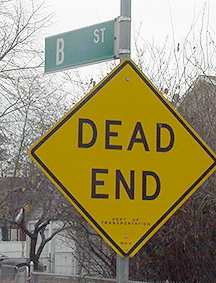 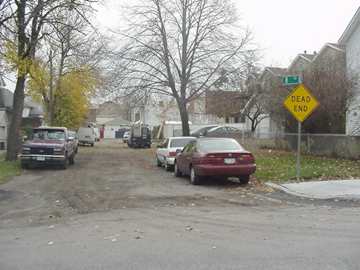 With no A or C Street to keep it company, B Street is a short unpaved alley on Baisley Avenue in Schuylerville. It was part of an A,B, C series, but A and C are long gone.

Even this short lane has some NYC history attached to it, however. According to Bronx historian John McNamara, many records and artifacts of the Bronx Historical Society were stored in the Schliessman family barn on B Street decades ago. 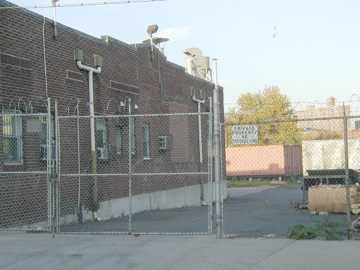 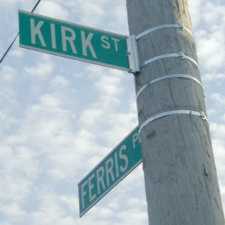 A driveway protected by barbed wire is all that remains of Kirk Street, an alley in the vicinity of Westchester Square. It was demapped in 1989 and is now on the property of a fuel oil concern. It is a very ancient track and was used by Dutch colnials as far back as thew 1600s.

Recognizing its 3-century lineage, perhaps (though I’m not quick to give them that much credit), the DOT still faithfully marks Kirk Street on each side of its former intersection with Ferris Place.

A block away on Commerce Avenue you can find the ancient Ferris family cemetery. It’s overgrown with weeds and has become a trash dump.

“Kirk” is a common term in Scotland for church and, indeed, the venerable St. Peters is nearby on Westchester Avenue.

CHANGING OF THE GUARD: Documenting the beginning of the end of the ornate castirons in 1960.