New York City began phasing out trolley operations in the 1930s. For better or worse (mostly worse) New York cast its lot with the internal combustion engine. Mass transit has been the red-headed stepchild to King Car for decades.

Trolleys provided a quick, clean and nearly noise-free trip. They got in the way of cars, though…so they had to go. There are a few remaining trolley stations and terminals in NYC and Forgotten NY has them covered on this page. 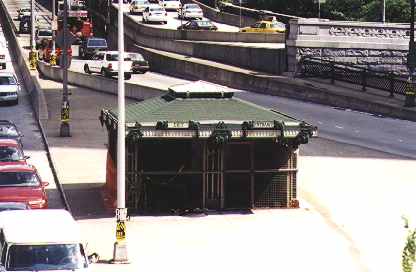 The span, completed in 1909, had an underground trolley terminal in a loop under 2nd Avenue. Trolleys ran to Astoria, Flushing, College Point, Corona and Elmhurst for nearly 50 years by different trolley companies. One final trolley line would remain until 1957 to serve Welfare (now Roosevelt) Island. The trolley would stop at a midspan station where an elevator would take passengers to the island. photo: David Dyte 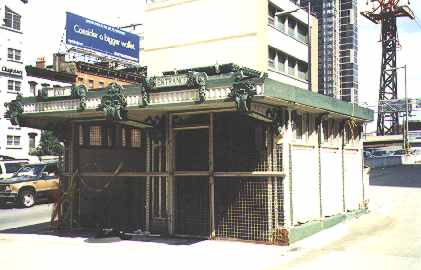 Amazingly, one of the trolley terminal’s ornate Beaux Arts style entrance kiosks has not been demolished. The old trolley trackways are now roadways. The staircases lead nowhere, of course.

Joe Brennan’s Queensborough Bridge Railway page. Some excellent pictures of the trolley crossing the bridge and detailed information on the trolley’s history and operations.

In the 1970s Roosevelt Island was developed for residential use. The trolley had deteriorated too far to be used again, so New York’s only aerial tramway was built. One of its towers can be seen above right. Subway service came to Roosevelt Island in 1988. 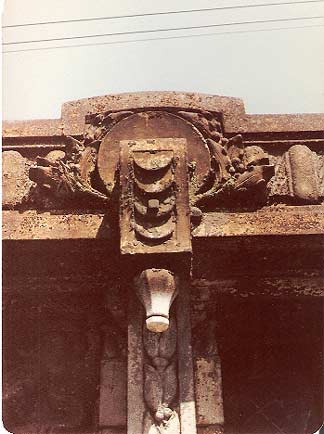 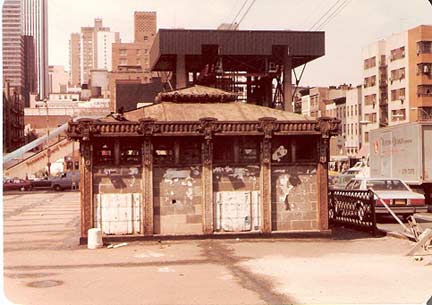 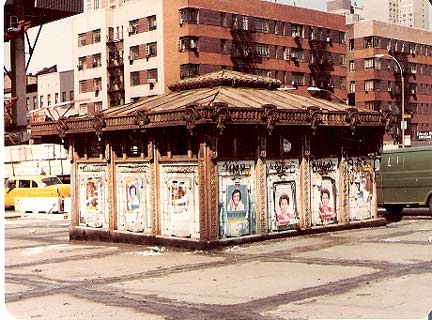 A trio of images of the terminal in the 1980s, photographed by Bob Mulero.

Another surviving Queensboro Bridge terminal served as the entrance to the Brooklyn Children;s Museum in Bedford-Stuyvesant for several years. It now serves as the Roosevelt Island visitors’ center near the tramway exit/entrance. 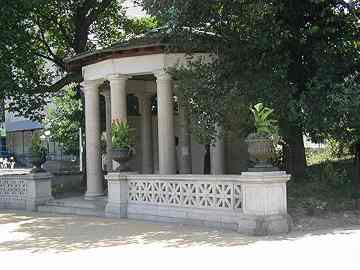 Just like today’s bus route, the #41 went to Marine Park with a branch that went to Bergen Beach. 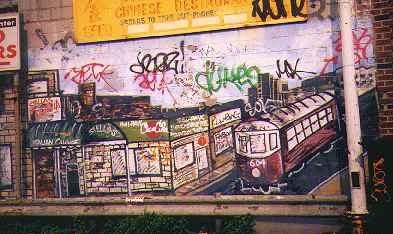 On its way to Bergen Beach, the #41 ran along Avenue N. It’s been over 50 years since a clang was heard here, but a clever Avenue N graffitist remembers, or else has heard about it from his grandfather.

In 2001, an empty lot at Avenue N and Utica Avenue marked a trolley layup area that still hadn’t been built on. Some of the old trolley poles are still there!

In 1951 Bergen Beach hadn’t yet gained its acreage of tract housing. There were homes here and there, but the area was full of empty lots until the postwar years. The 1960s saw Bergen Beach and Georgetown develop into what they are today.

This ancient trolley terminal has been hiding in plain sight for years. It served as a terminal for numerous trolley lines from Brooklyn that crossed the adjacent Williamsburg Bridge, making it one of a handful of underground trolley stations or terminals.

The MTA has pretty much allowed it to remain as is for decades. The tracks are still there as well as the overhead supports for the wires that gave power to the trolley cars.

The “platform” can be glimpsed, though not very clearly, from the platform of the Essex Street station on the BMT J and M lines. A pair of binoculars may help to see the tracks.

Tracks are still visible through decades of dust at Essex Street. These photos, taken in 1999, are by Forgotten fan Mike Fagan. 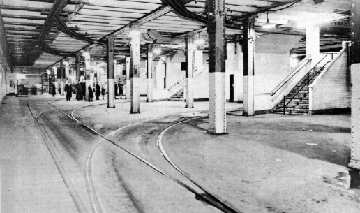 1930s view of the terminal from Joe Brennan’s Abandoned Stations page. For detailed information on this trolley terminal, and all other abandoned NYC rail, Joe’s site is the place to turn.

2012: Since it’s plain the space will never see active trolley service again, a plan has emerged for the the space to be turned into a park, a la the West Side High Line.

WHO ARE THOSE GUYS (AND GALS) Part 3: Madison and Union Squares

Is there any location where we could see remaining trolley stations
/tracks in 2013??

My dad, John F. Mahoney was a trolley driver in the 1920’s. It was either in N.Y.C. or Brooklyn. Is there anywhere that I could get information on this? Did they have badges, a picture or and kind of identification them. I woul appreciate any help you could give me! Thank you.

On the morning of October 31, 1956, I boarded the very last trolley leaving the Hegeman Avenue terminal at Hegeman Avenue and Bristol Street (where I lived at the time) and rode up to E.98 Street and Church Avenue and walked home knowing not only was I the last passenger to get on the Church Avenue line but when I got off was the ONLY passenger on the line making its farewell trip to history.

I distinctly remember taking the trolley over the Queensborough Bridge as a young boy in the 1950’s and exiting at the station on the Manhattan side. For the little it’s worth: since the trolley was discontinued in ’57 at some point I suppose I will be one of the last surviving former passengers of a NYC trolley. Same for the 3rd Avenue El.

You are not alone Peter. I rode the very last Trolly over the QB Bridge with my Grand Dad, in 1957 at the age of 5. I remember it vividly as I do most my childhood. We rode it every Saturday together from our home street in LIC to Manhattan. Went to Central Park and other favorite spots, then back home on the trolly. It was a sad day for me knowing it would be our last trolly ride together. The elevated trains and subways were a second choice. The Trolly station in Manhattan on 2nd Ave. remained for quite some time after.

Pete how stupid can we get
It was a terrific system
And so was the red line in Los Angeles , plus Chicago, Philadelphia
This nation has complicated the obvious and simplify the momentous it’s sad to see a nation crumble in front of your eyes govt is poorly run on both sides of the isle we lost the concept of good govt
And we let a bunch of irrasables take over I don’t see our elected officials crying poverty and yet some of our founding fathers went broke and not one cried woes me they took there shot some succeeded some failed
U S grant died broke but we forget his memories that Samuel Clemons finished the day he died these people were strong in success and in failure
Today we cry like babies looking to be fed
We cater to everyone except ourselves as teddy Roosevelt said
” the world will never love us, they may respect us they may fear us but never love us cause we have to much ordasity “

I am trying to find out how I can find trolley routes for Manhattan in the 1920’s. Does
anyone know how I can get such information?