I’ll admit it, I love Coney Island, and I wasn’t even there during its prime days of infamy, er, popularity, from 1920, when the BMT Subway arrived, till after World War II. For our tenth Forgottoners Tour, we took a walk on Surf Avenue and the Boardwalk and took a look at some of the attractions that don’t make the magazines and TV documentaries. 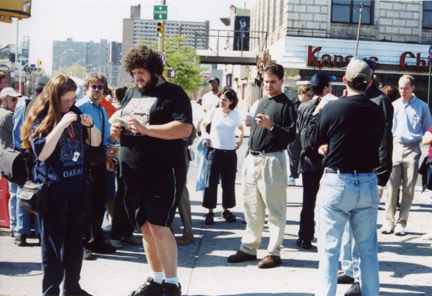 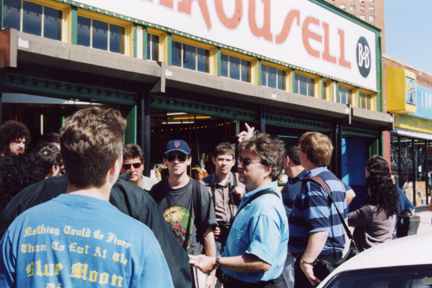 Your webmaster (blue shirt) expounds in front of the historic B & B Carousel, a Surf Avenue fixture for seven decades. 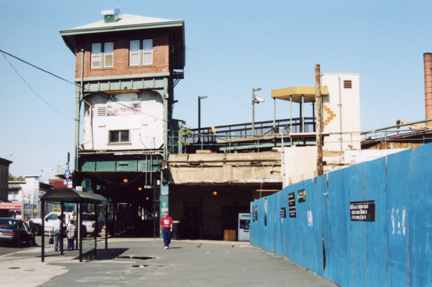 Most Forgotteners arrived by subway and got one of the final glimpses of the old Stillwell Avenue Terminal, which was constructed in 1920 and is the only NYC subway terminal handling four separate subway lines, the B, F, D and N. Presently, the terminal is being razed and will be replaced by a high-tech terminal which, if the reports we’ve heard are true, will gather part of its electricity from a large solar panel. Presently, only the W (which is temporarily replacing the B in Brooklyn) terminates at Coney Island. 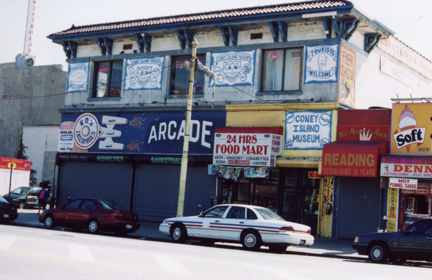 We stopped before the old Union Cigar building on Surf Avenue. It’s the oldest building remaining on Surf, having been built in the 1870s. It’s presently home to the Coney Island Museum as well as Sideshows by the Seashore. 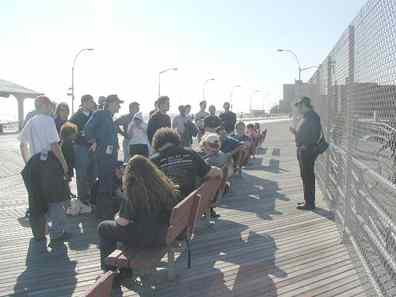 We stopped in front of the possibly soon to be reactivated, 60+ year-old Parachute Jump to allow Forgotten Fan Mike Olshan, who has been a Coney habitué for decades, recount his experiences at Steeplechase Park, which the Parachute Jump used to neighbor. Let him take it away…

“I’m a Brooklyn resident, grew up in Bath Beach and often walked to Coney Island in my youth, hung out all day at Steeplechase with my friends Freddy and Bernie. We’d slip in through a loose spot in the fence or an unguarded gate. Once, I recall that we walked backward through an exit.

“We used to ride the horses, driven by gravity down an inclined track which spiralled around the Steeplechase building. Then, to get off, you had to go through a maze and across the trick stage. There was an alcoholic midget clown whose job it was to give you a hard time with a slap stick (for the gals) and an electric prod (for the guys). He used to chase the gals over the compressed-air blowholes, so their skirts would be pushed up. We used to drive this little guy nuts, flipping him on the ground Bowery-Boys style (one guy crouches behind his legs, the other guy pushes him from the front, he rolls over the first guys’s back and lands on the ground). Then we’d grab the electric prod and chase him with it, as the crowd roared. But he had a trick, too, being an alky who felt no pain. He’d ground himself to the rail, grab the prod, then touch me on the nose with his forefinger,delivering a shock to me. Whereupon, I would drop the prod, he’d pick it up and chase me. It was all in good fun. 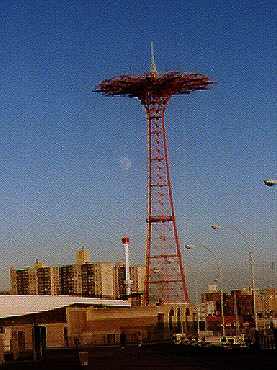 “Today, people would sue in court over this sort of treatment. In fact, I understand that there were some lawsuits and that is why the stage was closed a few years before Steeplechase was finally demolished for a parking lot. And I heard that, toward the end, somebody with no sense of humor came out with a knife and cut the clown. Alas for our lost innocence.

“We used to search the ground for discarded ticketswith holes that had not been punched, because each punchout was redeemable for a ride, so we’d go on everything all day for free. And when we got tired, we’d give a punchout to enter the audience seating area at the Insanitarium, and watch other members of the public thread through the maze of obstacles, dodge the clown, and see the skirts get puffed up by jets of compressed air.

“I got stuck on the parachute jump once, dangled there for about three hours. But I was a nut and enjoyed every minute of it. Whatta view!

“One of the most interesting rides was The Whirlpool, a giant turntable shaped like a roulette wheel. Riders would walk a wooden drawbridge to the platform in the center of this bowl-shaped centrifuge. Then the drawbridge would be lifted and the ride would start to spin. One by one, despite our attempts to cling, the increasing centrifugal force would draw each rider down into the bowl. We’d be pressed flat against the edge, pinned in whatever position, sometimes upside-down. The centrifugal force was irresistible, we experienced he sort of G-force that astronauts do.

“When the ride was over, the drawbridge returned and the riders would stagger off, dizzy and nauseous. About half of them would barf on the floor, an employee was posted there just to mop up the puke and he was busy all day. Two special conditions were attached to this rather violent ride. One is that shoes had to be removed before entering. This was to make sure that, as the riders were slammed together inside the spinning bowl, nobody got clipped in the head with a shoe. And there were two lines, one for the guys and one for the gals. Alternate sets were all-guys and all-gals, for a three-minute spin which seemed to last forever. This was to prevent any groping or grinding as the G-forces slammed and pressed the riders together. 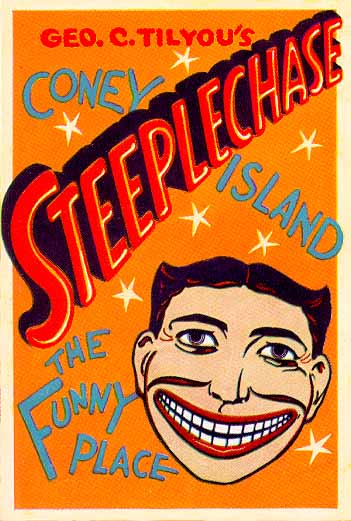 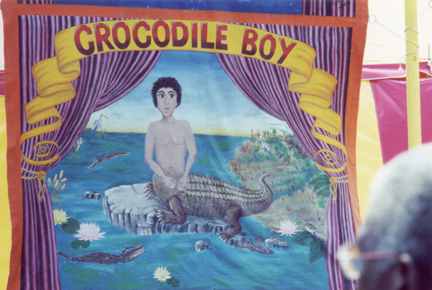 “And I remember the real freak show, just down the block from Steeplechase. I saw Jo-Jo the Mule Face Boy, the Turtle Girl, the Leopard Girl, the armless guy who rolled cigarettes with his feet. I remember a beached whale being exhibited, will never forget the horrible stink of formaldehyde and rotting flesh. I think I paid a quarter to look at the huge stinking mess. I remember that I was with my mom because the odor made her barf at the curb. A kid doesn’t forget that sort of thing. 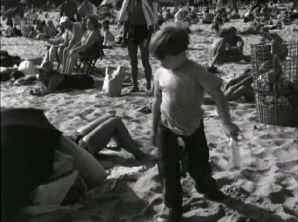 Richie Andrusco in "The Little Fugitive"

“You can still see lots of old Coney Island on film. The very best is an independent production titled The Little Fugitive (1953). A nine-year-old boy wanders through the beach, picking up deposit bottles and cashing them in so he can go on the rides. A virtual tour of old Coney Island, with very little dialog and a haunting harmonica theme in the background. This is the first feature ever to be shot with a hand-held camera; previously, every film was shot on the tripod. The child star, a non-professional named Richie Andrusco, lived across the street from me on Bay Parkway and briefly became a local celebrity.” 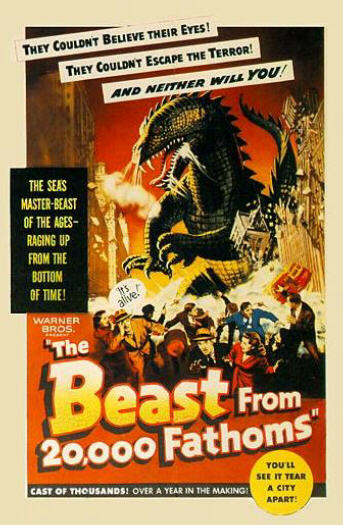 “Remember Beast from 20,000 Fathoms (1953), based on a Ray Bradbury story, filmed with special effects by Ray Harryhausen? The dinosaur comes up out of the ocean at Coney Island, climbs onshore at The Bowery behind Nathan’s, we can see Steeplechase in the background. At the end, a very young Lee Van Cleef is the sharpshooter who climbs up the Cyclone to shoot the monster with an atomic bullet. Don’t take my word for it; rent the video and check it out, you will enjoy seeing the background scenes.

Unfortunately, the live action at the end of the movie, did not take place in Coney Island, but at a California amusement park. Anyone who is familiar with the scene can easily identify it as such. Years ago, I emailed someone who confirmed this for me. The scene is definitely not the Cyclone, nor is any footage from Coney Island. And in the film, the monster climbs ashore at Manhattan Beach and walks to Coney Island. 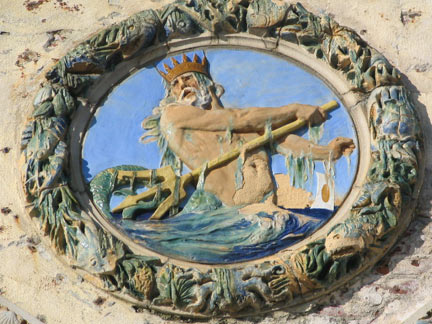 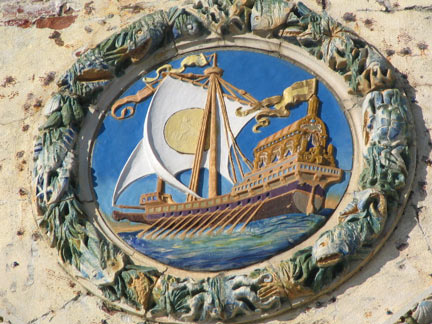 These are just two of the incredibly detailed terracotta friezes on the old Child’s Restaurant building on the Boardwalk. The building has also been used as a bathhouse, and most recently, a candy factory. Of late, the building has been rehabilitated after the forces of graffiti had control of it for awhile. 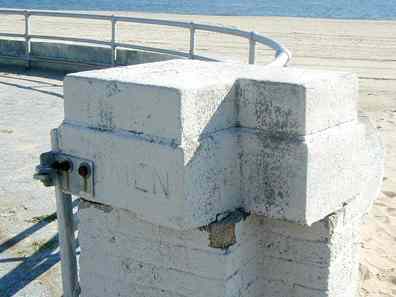 Remember Mike Olshan said some of the Steeplechase rides were segregated by sex.I saw no trace of any bathrooms below this railing, so it’s possible that these were either bathrooms or changing rooms under the boardwalk.

While currently and for the last several years, the sand on the beach rises to the height of the Boardwalk, it was not always so. Years ago, the sand was allot lower, about 8 to 10 feet lower. The cement portions of the boardwalk in several locations, are actually roof tops of bathrooms which were accessed from the sand. So the signs on the boardwalk were right by cement staircases that led down to the beach and to the bathrooms. When they placed all the new sand on the beach, they covered up the entrances till such time as the sand is again 8 to 10 feet below the Boardwalk. 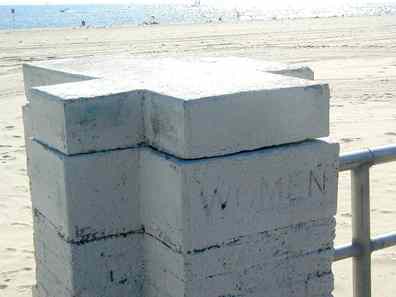 Our tour took a little more than three hours. Besides seeing such well-known Coney Island remnants like the Cyclone and the Parachute Jump, we visited the sites of Feltman’s and Henderson’s Dancehall, the Lincoln Colony of bungalows, saw remnants of previous Coney Island renovations and a lot more. We enjoyed spectacular weather, with a sunny 75 degrees. 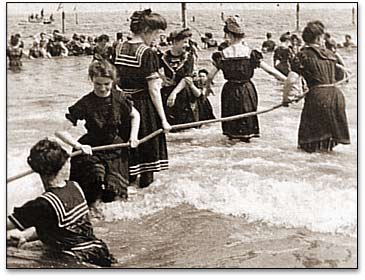 In the 1910s, women's bathing suits were scandalous. 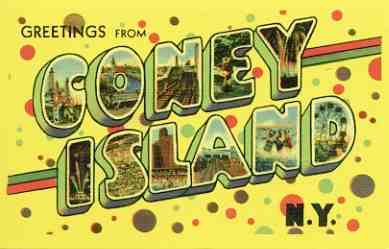 Special thanks to Mike Olshan for his recollections; he also snapped many of the pictures on this page.

Keep watching the Forgotten NY homepage for our next tour which may be in late winter.