In September 2002, FNY did its first McCarren Park Pool (Greenpoint, Brooklyn) page, assuming it would remain forlornly moribund forever. In true New York fashion, change came rapidly thereafter, as it first became a premier music venue, with big names like Blondie and Wilco appearing, and after that, a full-blown restoration of the pool was engineered.

But back in the bad old days between 1983 and 2005, when the pool lay empty, it was an attraction for the FNY camera and those carried by Forgotten Acolytes…

EVERYONE INTO McCARREN PARK POOL!

Grab your speedos and bikinis and pack that sun tan lotion. We’re going to do a few laps around Brooklyn’s largest swimming pool, with a capacity of between 6000 and 7000 swimmers. And it’s absolutely FREE…all you need are some wire cutters and a few thousand gallons of water!

Opened in the teeth of the Depression as a Works Progress Administration Project in 1936, the McCarren Park Pool in Greenpoint, Brooklyn was the last of eleven pools built in New York City during the Depression years. Mayor LaGuardia, at its opening day dedication (seen above) noted that “no pool anywhere has been as much appreciated as this one.” 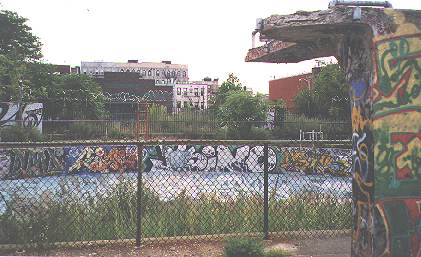 The diving board is ready and waiting. O Greg Louganis, where art thou? 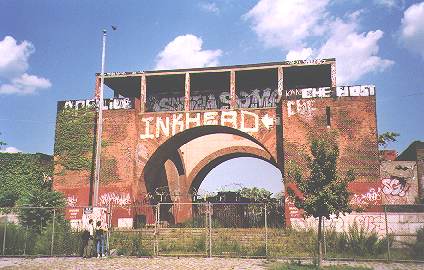 Admittedly, the pool today is a little worse for wear, but it’s still got some potential with a little spiffing up. Actually, you have to have a sneaking admiration for how resolutely both the City of New York and resident Brooklynites have combined to utterly trash this proud outdoor natatorium. 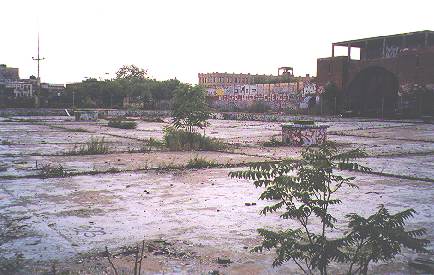 A tree grows in Brooklyn, the ailanthus, which will grow anywhere. 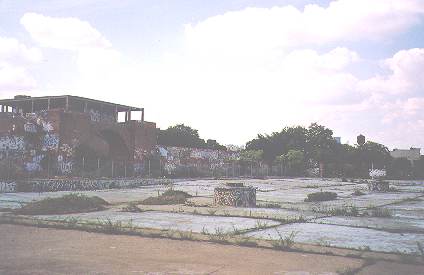 In the mid-2000s Mayor Bloomberg was trying to cut and paste together a plan to bring the 2012 Games to New York City, which eventually went to London. Perhaps a bid for the 2024 Games would include McCarren Park Pol. Look no further than Greenpoint. This is not just your run of the mill Olympic pool. This is three times the size of an Olympic pool. 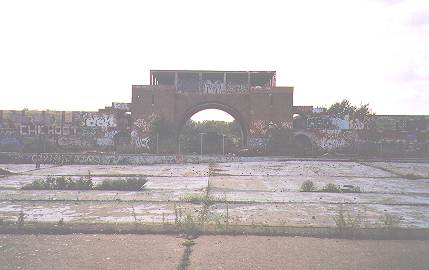 Just add water. Now, you’re going to have to watch out for broken bottles, rusted cans, insects and rats but other than that, this is a fantastic place for a swim. Now stroke! 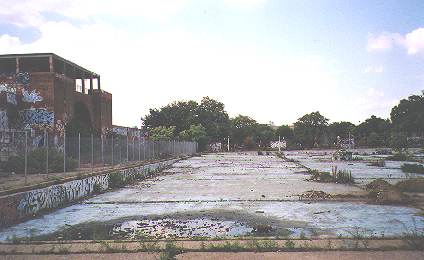 Let the politicians and residents of Greenpoint bicker over whose money to use to restore McCarren Pool…let the graffiti guys do their worst…let the constant oxidation of exposed iron do its thing. This pool has Olympics written all over it. Mark Spitz. Janet Evans. Michael Phelps. 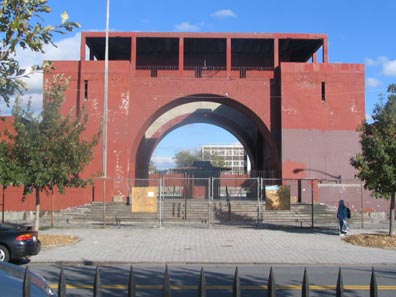 Reconstruction commences, 2008. The McCarren Pool entrance rises like a dream from across McCarren Park itself, which was developed between 1903 and 1905 and named for Patrick McCarren, state legislator & Williamsburg Bridge promoter in the late 19th Century.

All pool photos by Doug Douglass

An Architectural Guidebook to Brooklyn, Francis Morrone, Gibbs-Smith 2001
BUY this book at Amazon.COM

Brooklyn, Then and Now, Marcia Reiss, Thunder Bay 2002
BUY this book at Amazon.COM