SPY AT THE HOUSE OF MOE. The Stooges’ houses in Bath Beach

Bath Beach, Brooklyn, is a pretty sleepy neighborhood. That’s not a knock–that’s just how its residents like it. In the mid-1920s, it was just about as sleepy, though at that time, it was well-positioned for a building boom. The West End elevated, completed a decade earlier, ran down 86th Street and Stillwell Avenue to Coney Island, then the nation’s playground. The economy was buzzing along, Silent Cal in the White House, the Babe in the Bronx and Beau James in City Hall. Life was a peach. At this time, Moses Horwitz decided to ditch his sometimes spotty stage career and jump into real estate. 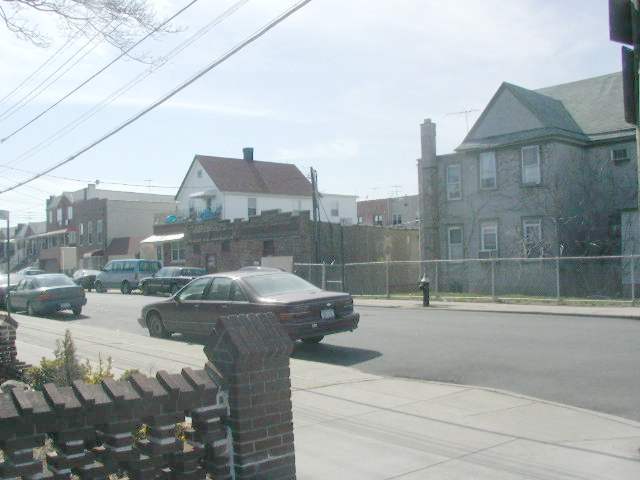 Moses’ mother Jennie ran Midwood Realty in Bensonhurst. With her help, he bought a plot of land for $1200 at Bath Avenue and Bay 43rd Street, which had only recently been cut through. With the help of his brother Jerome, and some friends from New Utrecht High School, they built four wood frame and brick homes on the block between Bath and Harway Avenue (which may have then been called Cropsey, but we’ll get to that). The most prominent was this three-story wood frame dwelling at Bath and Bay 43rd: 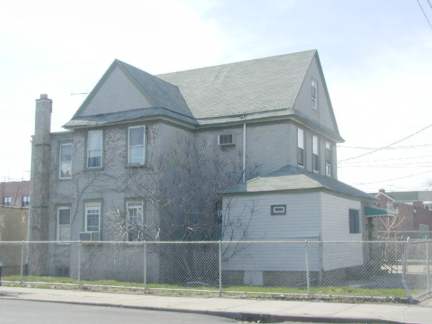 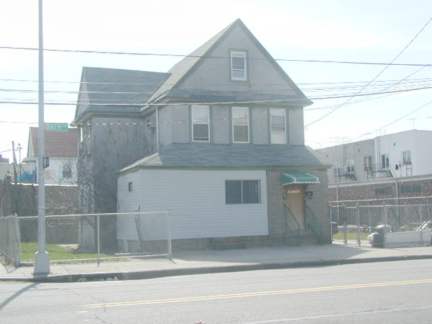 Moses married Helen Schonberger, a cousin of illusionist/daredevil Harry Houdini, in 1925. Soon enough, Helen got pregnant, but Moses wasn’t able to rent the homes and unfortunately, lost the $22,000 he had sunk into them. By 1927, he was down to his last $425. For a time, Moses tried to make a go of it selling distressed merchandise in the small, single-story brick factory he had built adjacent to the corner house, but that, too, fell through, and Moses had to return to an earlier profession. 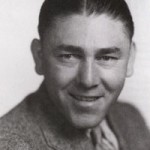 There was really only one thing left to do. Moses, whose friends called Moe, returned to his real forte: performing. He had appeared in silents as early as 1909, working at Vitagraph Studios in Midwood; there he met a vaudeville comedian named Ted Healy and the two became friends.

Years later, Moe, after a modestly successful career in vaudeville, rejoined Healy and, with his brother Sam on board, they began a stage comedy act that continued for the next ten years. Frizz-haired concert violinist and amateur boxer Lawrence Fineberg (who called himself Larry Fine) joined the act in 1925. A down period in 1926 led Moe, with the help of another brother, Jerome, to build the four Bay 43rd Street buildings. 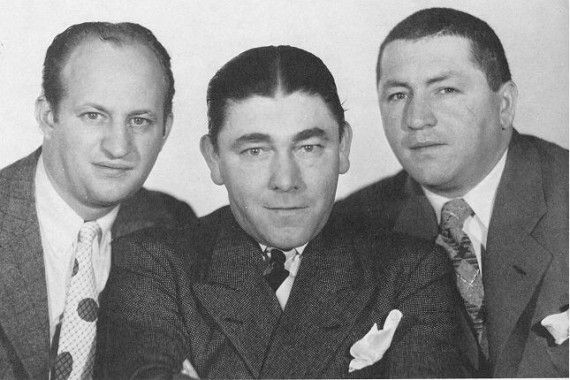 In the early 1930s, Sam Horwitz (his mother was always mispronouncing his name, making it sound like “Shemp”) decided to go off on his own, and so Healy and the boys needed a replacement. They found it in Moe’s brother Jerome, who had to be persuaded to cut off his wavy brown hair and mustache. His nickname, Curly, still stuck. Eventually, the three had enough confidence to leave Healy and sign a contract in 1934 with Columbia Pictures, where the act would remain for nearly thirty years as, of course, the Three Stooges.

And that, as Paul Harvey used to say, is the rest of the story.

As for Harway Avenue and Crospey Avenue, since we’re in the neighborhood, maps show that, in the mid-1920s, the two avenues mysteriously changed names. 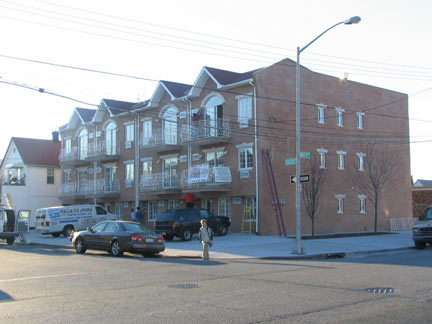 By November 2003, the corner house on Bath and Bay 43rd had been torn down, to be replaced by these attached dwellings. A couple of the homes built by the Horwitzes can still be found on Bay 43rd. 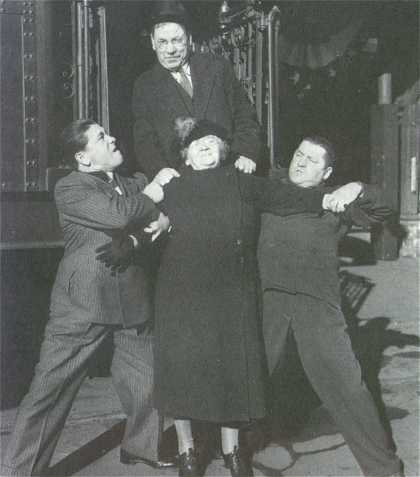 DEEP SIXTH: a walk up Avenue of the Americas

I used to watch and imitate the Three Stooges as a kid (most likely the only girl who did!). I ran home from school every day to catch them on our black and white TV set! I love this story!! I actually forgot that Moe and Curly were brothers…Thanks!

Curly was always my favorite!

Curly was and always will be the funniest man who ever lived in my opinion. His life was tragic and sad after he became famous. We lost him too young. I’ll see you soon Jerome Horwitz. I know your in Heaven…I hope!

This is a wonderful web page and I’m so thankful you shared the pictures of these homes.

I’m pretty sure some facts here are incorrect however:

* Larry Fine joined Ted Healy in 1928 (not 1925 as stated by you and many others incorrectly). Records show this. He joined just as Shemp had announced his departure from working with Ted Healy.

* The reason Moe went into real estate was not because of a “down period”, but rather because Helen’s relatives looked down on her marrying an actor and told her that she would “never have a home”. He wanted to prove them wrong.

* The reason the homes were a failure was not because he couldn’t rent them, but because he couldn’t sell them for more than it cost him to build them. “I built them too good” was Moe’s own quote. The idea was to build and sell and make an immediate profit, and that failed. He could have just filed bankruptcy, but he wanted all his friends to get paid, so he made sure they got paid first, and he was the one that ended up losing all his money.

Regardless of the above, you did a wonderful job in information gathering and I especially appreciate the pictures of the homes and the note about the side building created for selling “distressed merchandise”. I was not aware he had built a structure for this purpose.

Hi Omid G, Your responses are at least as interesting as the story itself! Did you live on the street? How do you come to know this, as you said you were going off of memory. Thank you!

Can anybody tell me if Moe.Curley and Shemp was raise and live in Brownsville Brooklyn ?

I lived on Bay 43rd Street all my life betwren Bath Avenue & Benson Avenue and never knew the Three Stooges built those houses!

Not sure of exact address but it was next to the library on bath ave and 26th ave. The house was on corner of bay 43rd and bath ave.

I lived by Bath. Ave and Crospey Interesting.

A good friend of mine grew up in that house the lily family I played in the house with Michael his brother and sister. And never knew the history of the house till now.

Yes John can’t believe it myself BIG MIKE LILLY one of our close friends s his family lived in that house when
we were Younger . From what I heard big mike passed
not too long ago and that news hurt because he was a
gentle gaint and one of the nicest people you could ever meet , so sad how this whole area is now changing from the way it was not many years ago ,.but the memories of growing up there, and all the great times we all had ,
how Close we all were in the area was something
real special
And will always be remembered !!!
Great post who ever posted it , and it sure brought back
some real good memories !
For those who don’t know “bath beach Bensonhurst”.

My grandmother always said that the Moe, Shemp and Curly had lived on 80th Street between Bay Parkway and 23rd Avenue, around the corner from our house.

My Aunt and Uncle owned that house! BIG MIKE Lilly was my first cousin’s son. I remember that block BEFORE they built the library next door! It was just an empty lot. Way back in the 1950s, my Aunt ran a dress factory
in the the back adjacent building and I remember being placed in the big bin of fabric for my nap as a toddler. Who would imagine that a Stooge also worked out of that shop. Next to the front entrance of the house, there
was a quaint glass store-front (which is closed in in the photo) which would sometimes sell odd things, like spangled hats and the like, though I don’t remember it being used much. Many visits took place there — sad to see now that it’s gone…. also miss the baseball diamond near the El on Still-well – 86th Street, that was turned into houses way way back.

Back in the 70s—– we Increased the electrical service at that home…. not knowing the history… also serviced the brick factory to the side….WHO KNEW,,,,,,

my grandmother and grandfather owned that house. many many memories of that home and the surrounding neighborhood.

Are any of these homes still standing as of 2020?

Maybe one or two.

We all ran home when it was time to see The stooges, Great Days, and then we’d come out and talk about the show for another half hour, laughing it up.

Wow I think I remember the 3 stooges coming to
The Fortway Theater. They did a skit. Does anyone remember that?