Firehouses have been in the news in 2003, as many have been closed or have had closing threatened by a cash strapped New York City, infuriating residents who fear inadequate protection from disaster as well as the sense of helplessness in the face of a seemingly uncaring bureaucracy.

This isn’t the first time the city has closed firehouses for whatever reason, however; on this page, we’ll see others that have succumbed and now serve other purposes. 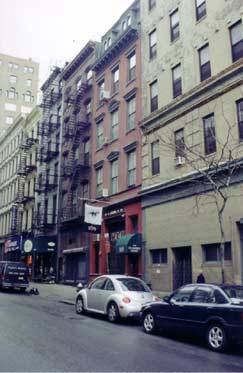 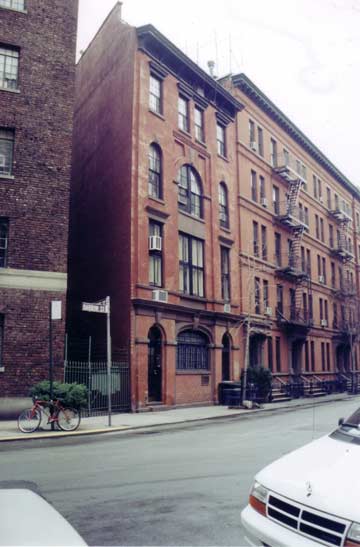 Was built in 1851 for Empire Hose Volunteer and was used until they disbanded in 1865. It is now an apartment building. A spiral staircase from its firehouse days can still be seen through its front window. 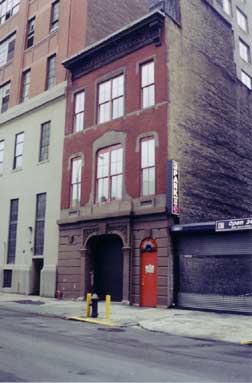 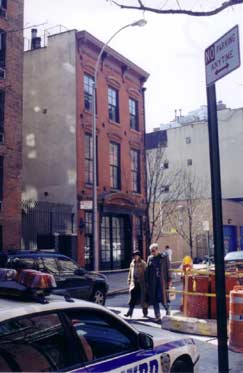 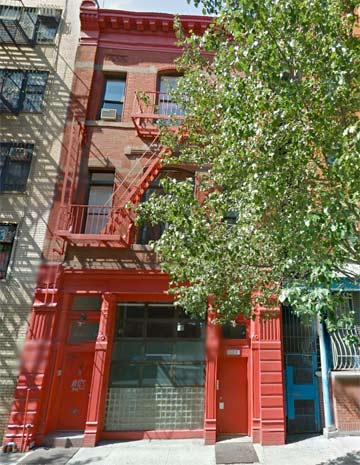 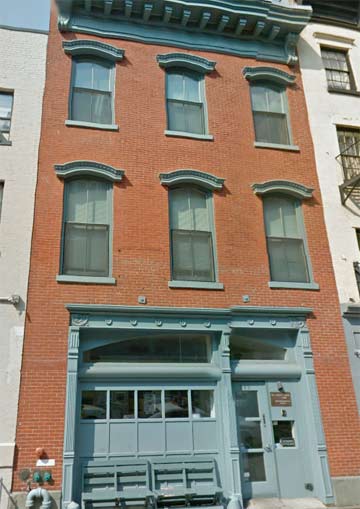 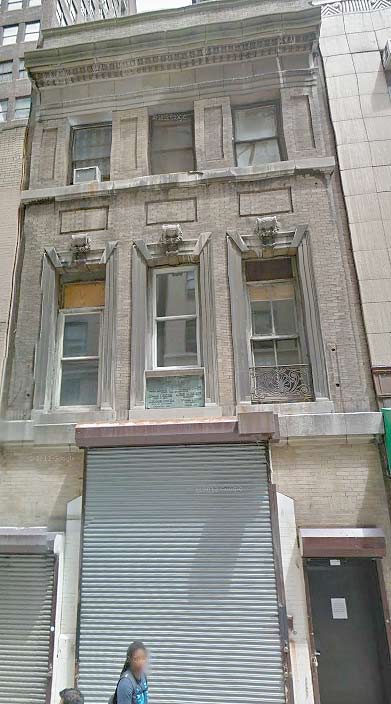 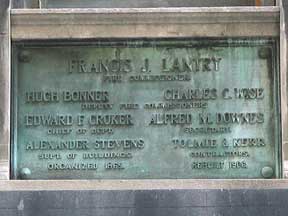 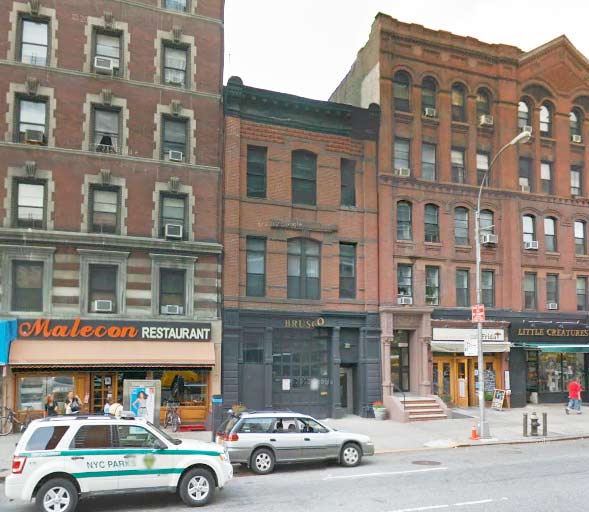 Thanks to Forgotten fans Anthony Pisciotta and Dominick Salerno for research and photography for this page.

I pass by 604 E 11th St a couple times a week and always guessed it might have been a firehouse. Thanks for this great post!

Great pictures! One interesting thing about that house on Amsterdam Ave. is that it is…or was..one of the deepest firehouses around. The original company, Ladder 22, was a “double company” and two very long hook-and-ladder companies occupied the first floor. When one walks by it today, you can see how deep it is by looking through the glass in the door, as well as some indications that it was a firehouse.

There are several former firehouses in NYC that were not owned by the City. They were owned and operated by the New York Fire Patrol, also known as the “insurance Patrol,” which was operated by the New York Board of Fire Underwriters. One house, at 240 West 30 St. in Manhattan, was recently renovated for commercial use. Another one, on West 3rd Street in Greenwich Village, has been renovated as a private residence, presently owned by CNN news reader, Anderson Cooper. The Fire Patrol was recently disbanded by the Underwriters.

There are a number of other former firehouses thoughout the city.

I’d like to add a little information and a couple corrections:

Thanks — I have updated the information with corrections.

Engine 25 closed to soon 1947. If they waited till the mid 60s they would be very busy in alphabet city and probably lives would be saved.

Cool, but how about all those racist drunks on http://www.thebravest.com ?

Ed – give me a call and you can tell me what you know about this. Racism has no place in the FDNY (or anywhere else), and we do all we can to eliminate it. We want everyone to be treated equally, which is why we oppose race-based hiring quotas with such enthusiasm. I’m sure you do too, but call and we can talk.

My grandfather was appointed to E-29 on Chambers St. (First Picture) in 1908. My father was DAC when I came on in 1968 and put me in L-105. (study house) And My great grandfather drove the horses in Steamer 5 in Middagh Street (after two tours in the US Cav.) from 1882 until it became Engine 205 FDNY in 1915. Grandpa was caught racing home against another fire engine down West Street coming home to E-29 after graduating from the first Motor Pump Opp. School. He died in his sleep when I was 10 in 1957, still the senior Lieu. in l-148 in Bklyn. May the Gods Bless All of us smoke eaters.

Where was E-25? My father was assigned there in 1938 & transferred when they were disbanded. I thought it was on E-5th & Ave. C but was recently told this was not accurate. Any info? Thanks

Guys, there is a great site called, ‘The Unofficial Home Page of FDNY’ I just sent the web guy a pic of my great grandfather sitting in ‘the Seat’ on the apron of Steamer 5 in Middagh St. in the Brooklyn Fire Dept. He did two tours in the US Cav. and was discharged at Ft. Hamilton B’klyn. He became a Sarg. under Gen. Reno. out in the Nebraska Terratories. I wouldn’t be here if Reno had listened to G.A. Custer. He was Michael O’Neill (my father’s maternal grandfather. My grandfather went on in 1908 and died in his sleep, at home, when I was 10 in 1957. 49 years and the senior Lieu. in 148 Truck for probably 30 years. My father went on in 1936 and retired in 1972 as DAC. I wrote 100% on the exam when I was 20 in 1968 and was sworn in in Sept. of that year at 21. Am I the only living 4th Generation FDNY guy? I have my great grandfather’s badge from the Brooklyn Fire Dept. and my cousin Jimmy Higgins (his dad was a BC in the war years) has his sword. Micheal O’Neill drove the horses after Steamer 5 became Engine 205 either in 1989 or 1913., he drove them until he died in his sleep in 1915. E- 205 made the last run with horses in April of 1922. They pulled the box at Borough Hall (arranged) and as the horses flew up on the plaza their new motorized rig was waiting for them. I have so much FDNY stuff that I tell people that I live in a museum.

Steve a Fourth generation Tracy still works in 108 his Dad (still alive but Ret) & his Grandfather & Great Grandfather all worked there going back to the horse drawn days.

Great article! I’m with the Austin Fire Dept. and my wife and I had the chance to visit Manhattan in April 2013. We were walking around SoHo with some friends and came across the Victorinox Swiss Army store on Wooster street. They had some FDNY memorabilia in the store and the staff said that it was a converted firehouse. I don’t remember the details but it looked legit. We really enjoyed our visit to the city and hope to get back there in the future. Much respect to the FDNY from your brothers and sisters in Texas.

There was a firehouse in Flushing that was closed and renovated for Fire Marshals. It was located between E-273 and E-289 in back of Main Street. The company was E-272 and was closed sometime back in the late 1970’s. Many years ago , I had mentioned this to a Buff who was pretty much on top of the Dept., but he never heard of E-272. Time marches on I guess.

Great pages. My mom had all of my father’s front pieces mounted and framed L-114,110-105 (my house too) BC-38, 15 Div. Then DAC which is still on his helmet. But the one front piece is in its own frame is a tall one of my grandfather’s. The first picture on this site – Engine 29. Hid L-148 Lieutenant piece is on his helmet. Nice collection. God bless all Firemen.

I’m researching my great grandfather, Francis (Frank) Kiern. On his gravestone is printed: Member of Co. C 20 R 7 C New York . I was wondering if this was a fire department in about 1860’s. Thanks for any help you can provide.

On west 140th just west of Amsterdam, you’ll find the original quarters of Ladder 23. It’s currently owned by CCNY and has been since about 1924, but right above the bay door, the original “Hook & Ladder 23” signage is still visible.