Directly across Richmond Terrace from Mariners’ Harbor, in the far northwest shore of Staten Island up a lengthy gravel path, are the remains of docks (occasionally) covered in rime, from which new ships were launched into Kill Van Kull. The tall building in the center left is Goldman Sachs’ Jersey City headquarters; at 820 feet in height it will be the tallest building in New Jersey. The tall building on the right is the Williamsburgh, the tallest building in Brooklyn. At low tide the remains of sailing ships from the 1800s can allegedly be seen here. Another such ship graveyard can be found in Rossville. 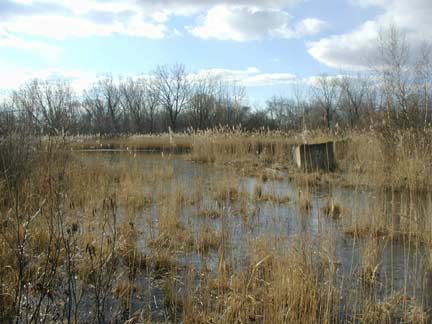 One of the more enjoyable things I do for Forgotten NY is to visit NYC areas I had never been in, and at this late date, those are becoming harder and harder to find. Much of Staten Island and the Bronx are still unexplored by the Forgotten NY cameras, a situation we hope to change as time goes on.

Your Webmaster can hardly be called a nature lover. In my formative years, my family had one of those kitschy all-silver-colored aluminum Christmas trees, the kind you used a revolving color wheel to paint in red, green, yellow and blue light. I thought it was the most gorgeous thing I had ever seen, and still do. I wish I still had that silver tree. No natural tree that you had to water and clean pine needles off the floor for us, thank you very much.

I still don’t seek out nature for nature’s sake. But in a Forgotten NY context, nature is very important. Most people think of NYC as completely dominated by concrete canyons and coffee-amped cab drivers. It’s thought to be rare for completely natural conditions to exist in the city and yet they do, in all five boroughs.

Nature has reclaimed parts of NYC that were formerly used for industrial purposes. Mariners Harbor formerly was home to shipyards, factories and railroads, but over the decades as demographics and business realities changed, most of these industries have gone. 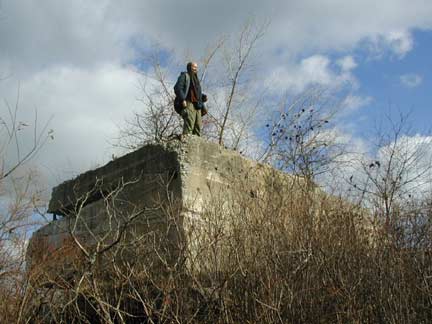 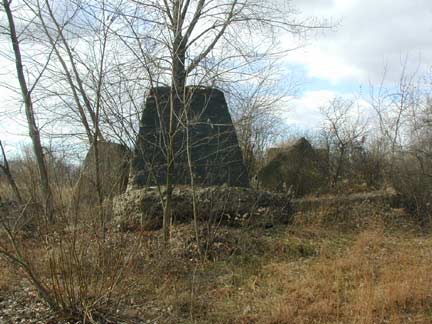 Mariners Harbor and Howland Hook are neighborhoods in Staten Island that stretch along the Kill Van Kull (separating Staten Island from New Jersey) between the Bayonne Bridge and the Arthur Kill north of Forest Avenue. Mariners Marsh is a newly-minted nature preserve in the far western corner of the island. It is a marsh and a wooded swamp (unless rain has been absent for several days, the ground is always muddy) and, while nature-lovers can glimpse dozens of species of flora and fauna, there’s something here for the urban artifact aficionado, as well. Mariners Marsh had a former life as an iron foundry and Downey Shipyard between 1907 and 1931. The wooden parts of the buildings are long dearly departed, but the concrete sections are still lying around like animal carcasses. Monument Swamp is cleverly named for the concrete hulks of the old foundries. 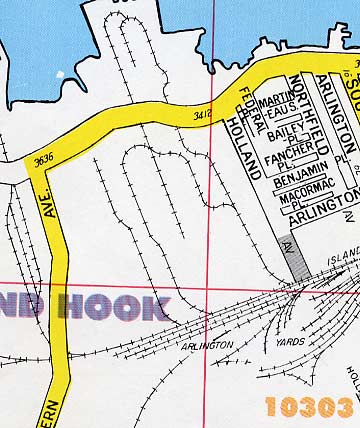 Howland Hook (some spell it Holland Hook, which is probably the correct spelling) is a lonely outpost in western Staten Island, a testimony to opportunities that have been left to wither and others that are beginning to blossom.

As we can see on the Geographia map, what is now the Mariners Marsh nature preserve was once crisscrossed with railroad tracks…or rather, still is. 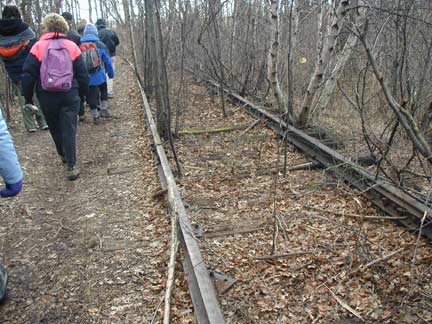 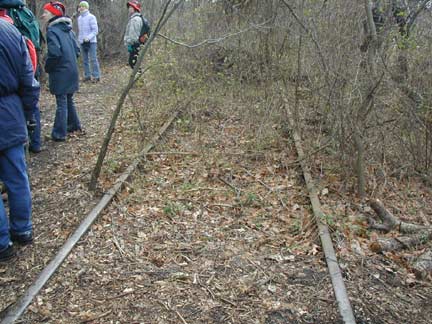 These tracks run generally north and south and formerly connected the shipbuilding facilities of Howland Hook with docks from which the ships were launched at the Kill Van Kull.

The tracks also used to run into the vast Arlington Yards, Staten Island’s only true freight yard (other than the very small one near Clifton). Most of the tracks have been pulled up, leaving a wide prairie, albeit one covered with train ballast. The yards may be reactivated for freight rail service (a set of active tracks leads off southwest to the industrial parks near the old Fresh Kills landfill). Arlington Yards also serviced, until 1953, the old northern branch of Staten Island Rapid Transit, still much in evidence along the neighborhoods of northern Staten Island. 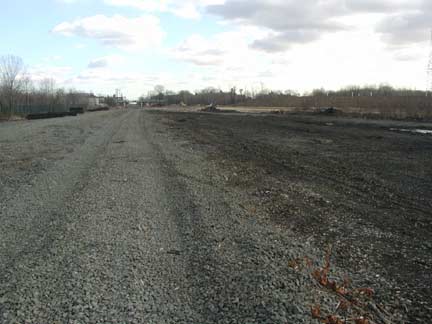 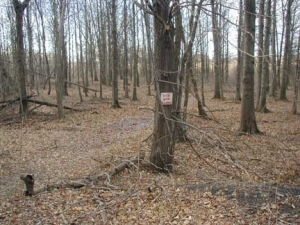 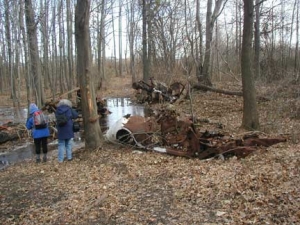 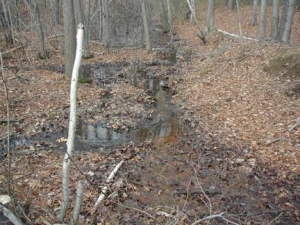 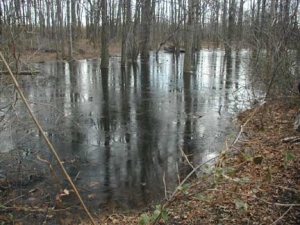 Pin Oak Swamp. Mariners Marsh is home to an old forest of pin oak dating to the 1800s, as well as the hulks of hot rods from an earlier era. 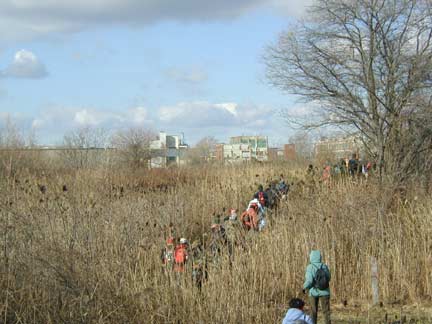 99 and 44/100 percent gone. North of the Arlington Yards in the western section of the marsh can be seen what remains of the old Procter & Gamble factory along Western Avenue. Beginning in 1907 and continuing for 8 decades, P&G’s products included soap, Crisco, Duncan Hines cake mix, detergents, Pringles “potato chips”, Citrus Hill orange juice, and dozens of other products, employing thousands over the years; Howland Hook became so identified with the factory that it became known as “Port Ivory.” At its height in the 1920s the site employed 1500. Port Ivory closed down in 1991, while its old buildings remained intact until about 2000 (coming down too early for Forgotten NY to get there).

We are walking past Log and Turtle Ponds, which, in summer, are covered with small plants known as duckweed which make the ponds appear to be algae-ridden, when in fact they are quite healthy. Log Pond is named for old telephone poles that jut up from its bed. 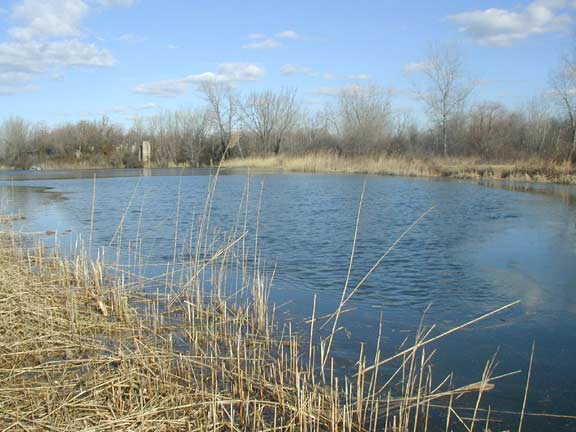 Downey Pond is named for the Downey Shipyard that was once here. 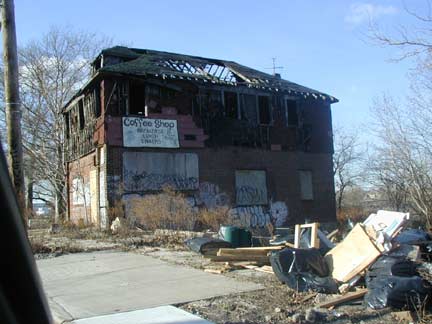 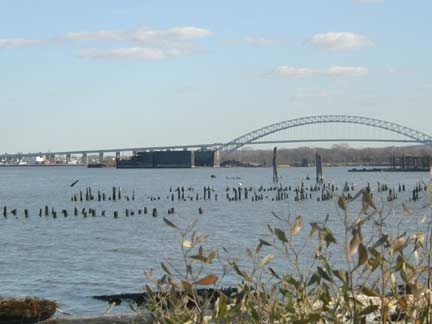 The Bayonne Bridge, an arch bridge in the tradition of the earlier Hell Gate Bridge, opened November 15, 1931. It was designed by pre-eminent NYC bridge builder Othmar Ammann, who opened the George Washington Bridge the same year and would design other NYC bridges, including the Verrazano-Narrows Bridge.

In the foreground, with the large rectangular sheds, can be seen Shooters Island. It’s often thought that the Borough of Richmond consists of only one island, Staten Island, but in fact the borough covers five islands, Staten, Hoffman, Swinburne, Prall’s, Isle of Meadow and most of Shooters Island (the upper third of the island is on the Hudson County, NJ side). The buildings on Shooters Island are an abandoned oil refinery plant and shipyard. The island hasn’t been used for industry since the 20s, and in recent years, the entire island has been managed by NYC as a wildlife refuge. 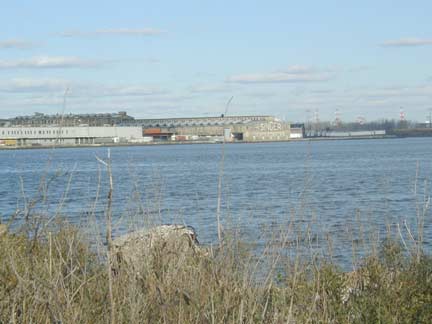 ETCHINGS OF BETHESDA Scratchiti from long ago at a Central park icon.

Your picture of downeys Arlington marsh railroad spur leading from the Arlington rail yard used to go to the Virginia Barrel works off holland avenue. I grew up on Richmond terrace 3 doors over from the coffee shop known as henns .owned by Katie henn and her daughter and in later years by Ralph bisagno. What u call log lake was man made. Post family homestead stood wher the lake now resides.