WE’VE SPENT a lot of time in Williamsburg lately…it’s a great source of Forgotteniana, and as one of NYC’s most-established neighborhoods, a great place to walk around in with its bars and cafes that sprouted up when relatively lower rents in Williamsburg started attracting Lower East Siders from Manhattan. Things have pretty much settled down now, and Williamsburg’s traditional attractions, like its varied housing stock and impressive architecture, have begun once more to lure the urban adventurer.

But Williamsburg can also boast of another attraction: its stock of rather unique and unusual lampposts that went up during a long-forgotten urban renewal project. 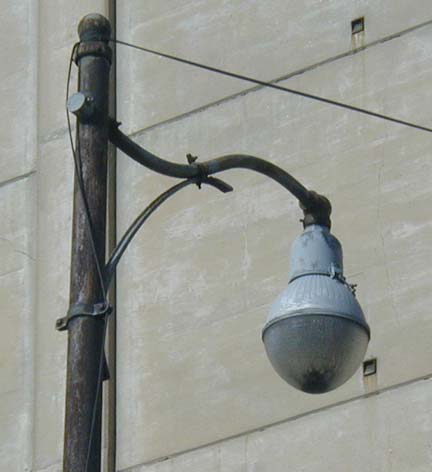 “Gumball” is a loose term given by streetlamp aficionados to a variety of luminaires that feature spherical mounts and glass diffusers.  Gumballs, which like the rest of their streetlighting brethren gave a soft incandescent light, first appeared in the late 1930s, and from that time until the early 1960s they were the absolute kings of main-route streetlighting…outside NYC, that is. Here, gumballs had to share their hegemony with many different luminaire stylings. In the early 60s, first greenish mercury and then yellow sodium bulbs pretty much wiped out the gumball, and today it’s rare indeed to see a classic gumball in NYC like the one spotted in the Navy Yard in Brooklyn adjacent to Flushing Avenue (right).

In 1974, though, a New Gumball asserted itself, first in the spruced-up Sixth Avenue, which was then known officially as strictly Avenue of the Americas. The New Gumball was used to light up the many pocket plazas along Sixth Avenue, formed by the many small streets that were eliminated when Sixth Avenue was rammed though Soho (which wasn’t called Soho till the 70s) in the late 1920s. 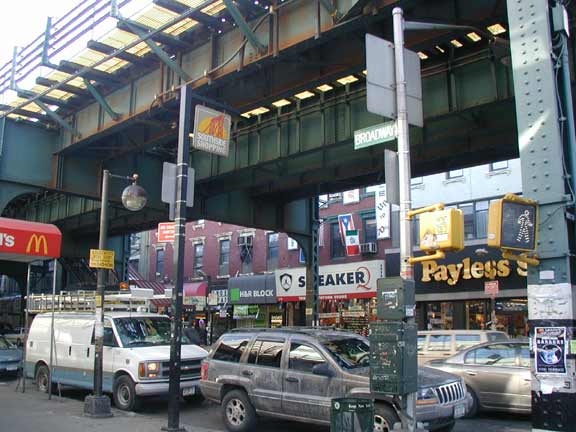 For the most part, the New Gumball’s truest calling has been under NYC’s many streets that are shadowed by elevated trains, mounted on low-slung poles. Here, on Broadway and Havemeyer in Williamsburg, a New Gumball coexists with a 1950s-era octagonal pole; flocks of short New Gumball-topped posts have taken over for the octa-poles under most els. Across the street, in front of Payless Shoes, notice the short pole that originally hosted a New Gumball has had its luminaire replaced by a modern Thomas & Betts luminaire.

But in Williamsburgh, the New Gumballs have long been associated with some unique poles found nowhere else in NYC….

Davit poles are usually not asociated with NYC streetlighting. Davits, one-piece tall poles with a curved apex supporting the luminaire, are found in other cities but have not been standard issue at all here, except on Havemeyer Street between Division Avenue on the south and Grand Street on the north. These davits originally all supported New Gumballs, but some Crouse-Hinds and Thomas & Betts lumes have replaced them since their original installation in the early 1980s.

Havemeyer Street is named for Williamsburgh sugar baron Frederick Christian Havemeyer, son of NYC mayor William Havemeyer (for whom Havemeyer Avenue in Soundview, the Bronx, is likely named). Williamsburgh’s association with the sugar industry was severed when the nearly 150-year-old Domino sugar factory closed in 2004.

Note the distinctive mural on the building above left. Williamsburgh boasts several such colorful murals, some new, some decades old.

The Havemeyer Street davits were accompanied by a flock of smaller acolyte poles used in mid-block, all of which also supported New Gumballs, as seen in the center photo. As the years rolled on though, the design was compromised and as the New Gumballs failed, they were replaced in some cases by standard-issue masts with Crouse & Hinds or Thomas & Betts luminaires. The design in the center would eventually be adopted, with some cosmetic changes, for NYC’s now standard under-elevated line lamppost, crowding out, in many cases, the Dwarves. It is known officially by the DOT as Type BB.

Installed in the same time frame as the davit poles on Havemeyer, these unusual poles on Division and Lee Avenues seem to have gotten some inspiration in their scrollwork (decorative metalwork in the mast) from 1920s-1930s era telephone pole masts, like the still-extant one shown at left in Van Cortlandt Park. As can be seen here, the DOT has replaced some original New Gumballs with 1980s-era bucket luminaires. 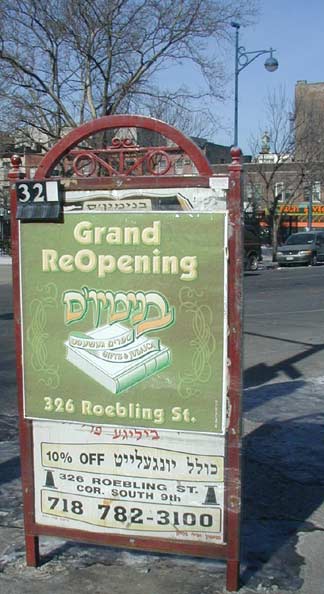 Lee Avenue is in the heart of Hasidic Williamsburg.The neighborhood is home to the Satmarer Hasidic Community, an orthodox Jewish sect whose origins go back to 18th century Poland. Sect members are highly visible because of their clothing and the men’s traditional beards and sidelocks. Along the main street of the community signs in Hebrew and Yiddish advertise kosher butchers, Hasidic clothing stores and religious article shops. Other Hasidic communities can be found in Crown Heights and Borough Park, also in Brooklyn.

The decorative New Gumball lamps were part of an overall sprucing up of the neighborhood in the early 1980s, also reflected in the signboard shown here which also bears traces of the same decorative scrollwork found on the lampposts.

Like the Havemeyer Street davits, Lee and Division Avenues also carry a second line of smaller poles, though they are also used on street corners and have proven themselves capable handlers of street signs, parking signage, walk/don’t walk signs, one-way signs, and stoplights.

These are known as post-top luminaires and originally, all carried New Gumballs, though some, as the one shown at left, have been given the luminaire usually used in NYC parks (Type 2085).