I’M NOT certain if I have ever made peace with living in Flushing. I moved here in 1993, to be closer to a long-gone job, and there always seems to be somewhere I’d rather be. Bay Ridge, where I came from, perhaps. Hoboken. Sunnyside Gardens. Bayside. Riverdale (where I turned down a rent-controlled apt for $800 in 1997. Too far from work.)

There are benefits. Flushing has been inhabited since the 1640s, and despite the best efforts of developers to homogenize it, Flushing has a very rich historic legacy still extant regarding freedom of religion, opposition to slavery (some of Flushing’s old houses were likely Underground Railroad stations) and inventive engineering.

Yet, Flushing’s history seems as if it’s been haphazardly preserved and these buildings have simply outlasted everything else by pure luck. That’s not completely the case. There are organizations that lovingly preserve Flushing’s old remnants. But there are many buildings not protected, and they are under the predation of builders who see a lot of $$$ in the real estate bubble of the mid-2000s, destroying, say, one family homes from the 1910s taht were built with the personality and individuality of that era in favor of characterless multifamily buildings. You see it in Astoria, Long Island City and all over the borough. Hopefully, new laws will be written that will brake the trend.

For the first time, we repeated a ForgottenTour from the past; we first visited downtown Flushing in June 2000. The difference this time was that we were able to actually enter a couple of the buildings we missed out on last time. We had hoped to visit Waldheim, the flashpoint of Flushing’s history vs. development dispute (and one where the developers seem to be winning) but humid conditions and time constraints forced a retreat. 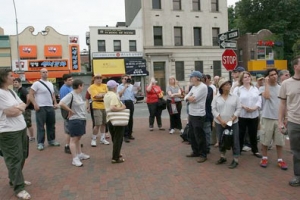 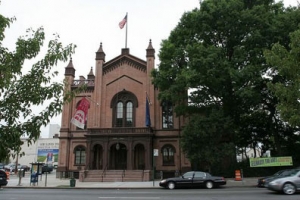 We gathered at Flushing Town Hall, constructed in 1862 by a local carpenter, an example of Romanesque Revival. It is a reminder of the days before Flushing became a part of Queens and then a part of New York City. Frederick Douglass and P.T. Barnum, and at least two presidents, appeared here during the building’s heyday. After NYC consolidation in 1898 Flushing Town Hall became a municipal courthouse, but it suffered from a gradual deterioration over the decades; there were fitful attempts to turn it into an anthropological museum in the 1970s. When I first moved to Flushing in 1993 it was a rundown heap protected by chicken wire from ever-present vandals. Above photos: Steve Garza 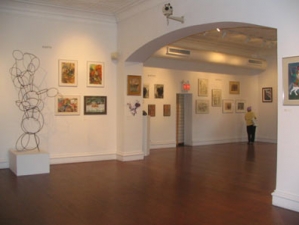 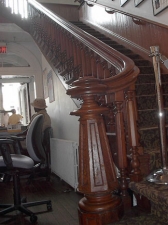 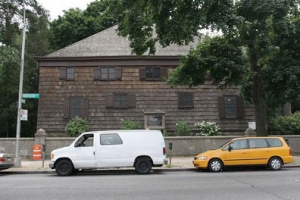 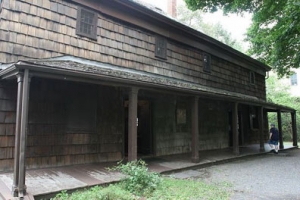 The Friends Meetinghouse has been used for Quaker religious services since it was constructed in about 1695. Not only is the building remarkable for its great age … it also figured in one of the first shots fired in the ongoing war for religious and personal freedom that is being fought even today. Above photos: Steve Garza 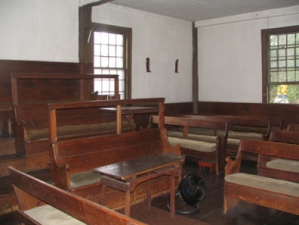 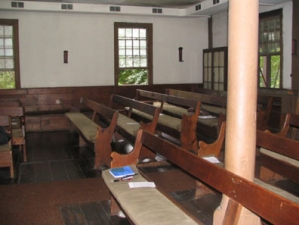 We were able to enter the Meetinghouse. This is the oldest section of the building, constructed about 1695; the other section isn’t that new, having been added in 1715. You won’t find an elaborate altar, statues or icons here: the Society of Friends believes in plainness.

In 1657, the Dutch still were in charge of New Netherland, and Governor Peter Stuyvesant ruled with an intolerant hand. He forbade any religion but the Dutch Reformed Church of his homeland, even for English settlers who were starting to trickle in. Quaker settlers sent a letter to Stuyvesant in that year that has come to be known as the Flushing Remonstrance, that reiterated the settlers’ desire for religious freedom. The document was signed by Flushing’s town clerk and sheriff, who were not Quakers. Nonetheless, they were soon tossed into prison, then summarily fired. 37 years after the Flushing Remonstrance was presented to Stuyvesant, this meetinghouse was built. 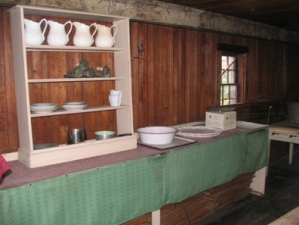 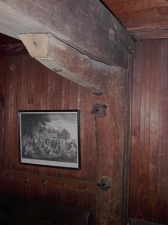 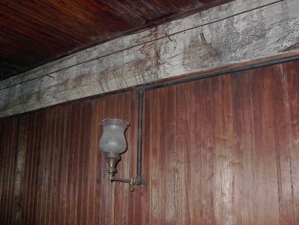 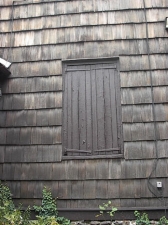 The upper floor is used for teaching workshops and community meetings. You will find original wood timbers supporting the structure, and gaslight fixtures (no longer functional) from the 1800s. Photos: Eric Weaver 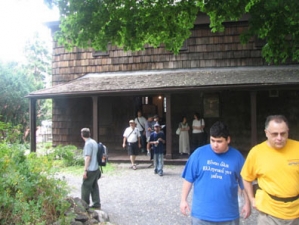 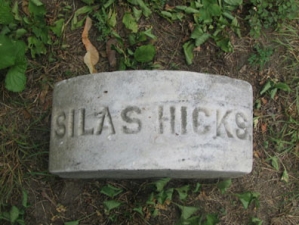 At the rear of the Meetinghouse you’ll find a quiet churchyard with graves hundreds of years old that makes quite a rural riposte to bustling Northern Boulevard. John Bowne is interred here.

Most of the stones, in Quaker tradition, are insscribed with just the name of the deceased.

More very old stones can be found at St. George Church at Main Street and 37th Avenue; that church, where Francis Lewis of Declaration-signing and Queens boulevard fame was a vestryman, dates to 1854. 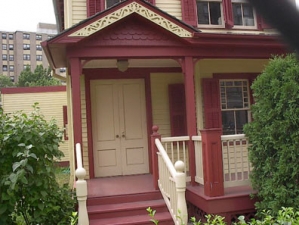 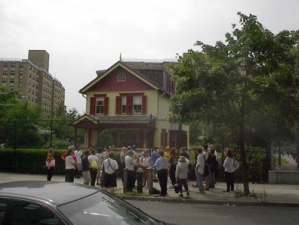 Lewis Latimer (1848-1928), inventor and engineer, was born in Massachusetts to parents formerly held in slavery in Virginia. He enlisted in the U.S. Navy in 1864 and upon his release, answered an ad for an office assistant from the patent law firm of Crosby and Gould, ascended to head draftsman, and discovered he had a knack for invention.

While still at Crosby and Gould, Latimer assisted Alexander Graham Bell, providing the drawings for Bell’s patent application for the telephone; after leaving the law firm, latimer joined the U.S. Electric Lighting Co, a chief rival of Thomas Edison. There he would produce a long-lasting carbon filament that was a major improvement on Edison’s 1878 electric lightbulb; Edison’s filaments, which used bamboo filaments, burned out quickly, making early bulbs impractical. Latimer published “Incandescent Electric Lighting, A Practical Description of the Edison System,” an early electric lighting guidebook, and went on to develop arc lamps and cooling and disinfecting devices. Latimer also developed the first threaded lightbulb socket and assisted in the installation of New York City’s first electric streetlamps, among many other inventions.

After residing in Brooklyn for a number of years, Latimer moved his family to a small frame house, built in 1887, on Holly Avenue in Flushing, where he corresponded with Frederick Douglass and Booker T. Washington.

By 1995, the small house, which was in a deteriorating state, was declared a landmark and was later restored to its original condition and moved to a new location at 137th and Leavitt Streets, across the street from the Latimer Houses, which were named for the inventor. Latimer’s granddaughter, Winifred L. Norman, Ph. D., is in the process of converting his home, in Flushing NY, into a museum.

On our first visit in 2000 we happened upon several of the Latimer family, who were busily working on the house shortly after the move, as well as Assemblyman Brian McLoughlin, who held forth on the house’s history. The house was scaffolded for a few years after that. At the present, it’s open as a museum for a couple of hours on Thursday. Call (718) 961-8585 for exact hours.  Photos: Eric Weaver 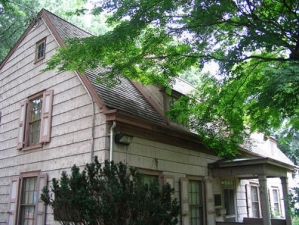 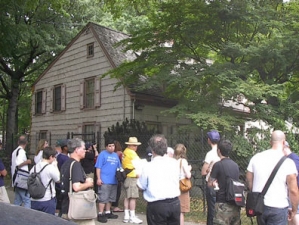 Bowne House, on Bowne Street north of 38th Avenue, was built in 1661 by English settler John Bowne and, unlike many other colonial houses from the 17th and 18th centuries, it still looks a great deal like it did when it was built (though a coat of paint wouldn’t hurt). The oldest part of the house is away from the street.

Peter Stuyvesant, continuing his reign of terror against religious dissenters, had Bowne, a Quaker, arrested in 1662. Before the construction of the Friends Meetinghouse (see above), Bowne’s house was the primary site for Quaker services. Sentenced to pay a hefty fine, Bowne refused and was jailed; he was subsequently exiled to Holland.

While he was there, Stuyvesant’s bosses at the Dutch West India Company reversed Stuyvesant’s non-tolerant policy, claiming that the colony needed many immigrants to ensure economic expansion, no matter what faith they were. Bowne returned home to Flushing in 1664; the British sailed into New Netherland five months later, and Stuyvesant surrendered without a shot being fired.

Unfortunately, it’s nearly impossible to enter this historic site these days; funds are lacking to maintain it as a museum. History fans are missing out on seeing the interior of this over 340-year old domicile until the money can be somehow scared up and the various parties in charge of the building can agree on how to maintain it. 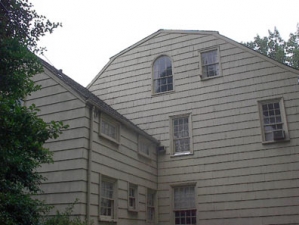 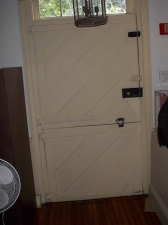 Amazingly, though Flushing can claim two buildings from the 17th century (Manhattan has none), 18th Century buildings are few and far between!

The Kingsland Homestead has been located in three sites since its construction in about 1790. In the 1920s it was moved from its original site on Northern Blvd. and 158th Street to make way for the Flushing subway; until 1968 it was located at the corner of Roosevelt Avenue and 155th Street, where it was beginning to become rundown. The Queens Historical Society had it moved to its present location in Bowne Park, and the Society is housed in the homestead now.

Quaker Joseph Doughty constructed this building at about 1785-1790. It is named for his son-in-law, sea captain Joseph King, who bought it in 1802. It was later occupied by the Murray family, who gave their name to Murray Hill and Murray Street in east Flushing, well into the 20th Century. The interior of the homestead has been preserved pretty much as it was in the 19th century, and a public exhibit by the Queens Historical Society occupies much of the first floor that includes a representation of the Flushing Remonstrance. Kingsland is open from 2:30 – 4:30 I’M, ‘I’uesday, Saturday and Sunday, but you are advised to call ahead for an appointment at (718) 939-0647.

According to Ghosts of New York City chronicler Therese Lanigan-Schmidt, the presence of restless spirits has been noted in the old house over the past couple of centuries, but that’s old hat for Flushing: spooks apparently have troubled the Friends Meetinghouse and the John Bowne house as well! The man with the horn. I had to scramble for a new bullhorn the day before the tour when the one I had been using less than year gave out! Photo: Vidiot

HAND MADE. 1940s hand-lettered and neon signs from around town.