BACK ON (GRAND) CONCOURSE

I FIRST WALKED the Bronx’s Grand Concourse on July 18, 1999, on ForgottenTour 2. It was 100 degrees, the tour split up into two factions, there was a Dominican Day Parade, a thunderstorm, and some of us wound up in a bar on Bainbridge Avenue watching David Cone pitch a perfect game. Later, I walked the Concourse again with Bronx maven Jon Halabi.

I wasn’t satisfied with either page though. Retired MTA bus driver Gary Fonville has collected a number of Grand Concourse images, and I’m hoping that this page will be the definitive last word in Forgotten NY on the Art Deco and Beaux Arts Grand Concourse masterpieces (though with a scheduled reconstruction, perhaps not).

PAGE NOTES: the images on this page were taken in 2001 and were scanned before I had my current software, so they will probably look a bit fuzzy. Also, I am placing a new bar on the left side of the page containing links; it’ll probably also be used to place vertical ads, as soon as I figure out how to fit them. 888 Grand Concourse at East 161 Street, built 1937 arch. Emery Roth. As you may guess from its location near the Bronx’s criminal courts, this building contains plenty of law offices. 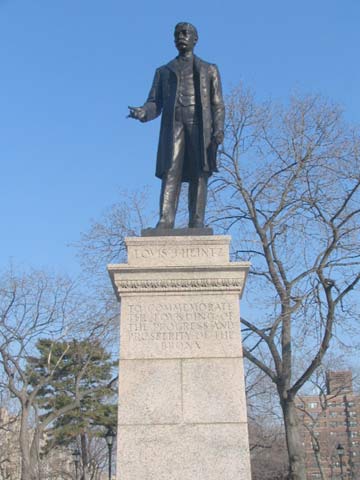 In Kilmer Park, along the west side of the Concourse between East 161st and 164th Street, is a statue of Louis J. Heintz (1861-1893). French sculptor Pierre-Luc Feitu sculpted the 1909 memorial to the Commissioner of Street Improvements who advocated the Grand Boulevard and Concourse in 1890. photo: your webmaster 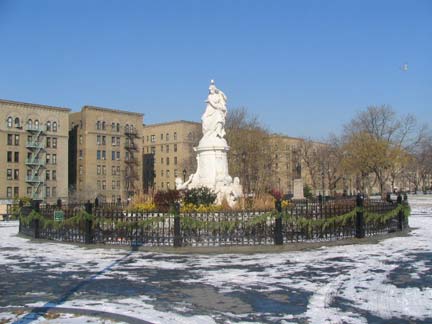 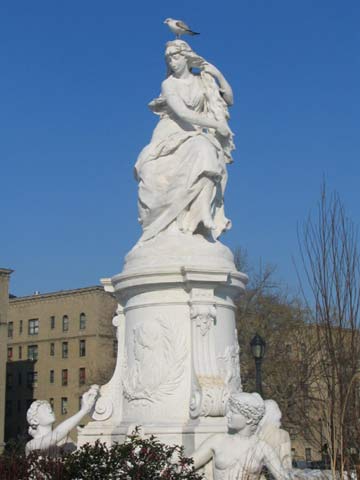 Ernst Herter’s 1893 fountain statue in honor of Heinrich Heine, author of Die Lorelei, was originally rejected by Düsseldorf, the German city of Heine’s birth. A coterie of affluent German-Americans purchased the work and offered to place it in Grand Army Plaza in Manhattan. That site, too, was rejected, and the fountain was ultimately placed in Joyce Kilmer Park at the Grand Concourse near East 164th Street around the turn of the 20th Century. In the early 2000s the fountain was fully restored to a brilliant white, given a new iron railing and moved to East 161st Street across from the Bronx County (Mario Merola) Courthouse. photo: your webmaster 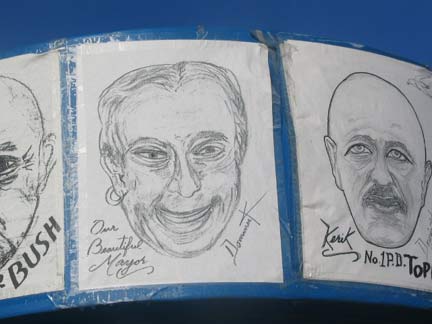 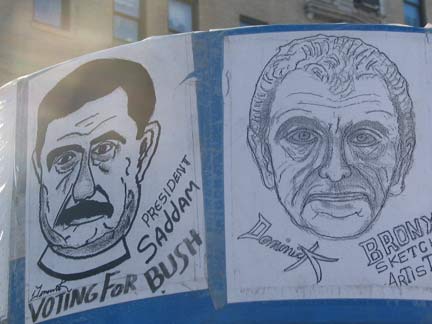 Shortly before January 2005, when your webmaster found this kiosk near Babe Ruth and Lou Gehrig Plaza, Concourse and East 161st Street, with caricatures by “Dominick, Bronx Sketch Artist,” former NYC Police Commissioner Bernard Kerik was accused of improprieties and had to back out of his nomination as top security honcho for the Bush administration. 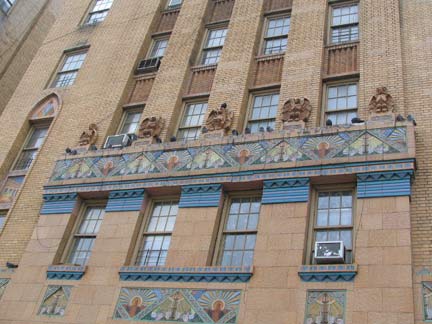 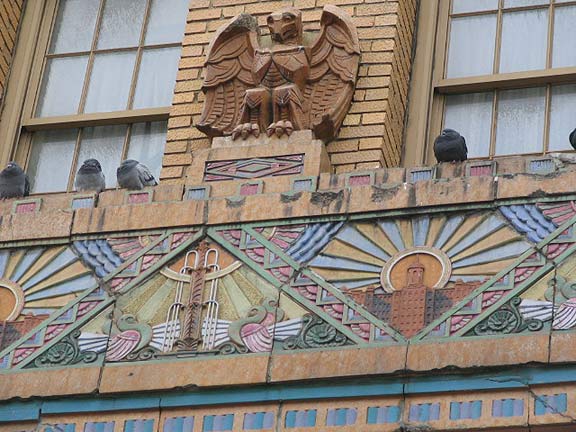 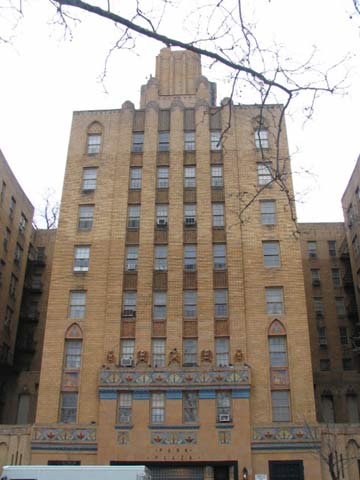 Let’s briefly walk a couple of avenues west, across John Mullaly Park to 1005 Jerome Avenue, Park Plaza Apartments, designed by Horace Ginsbern and Marvin Fine. It was started in 1928, making it among the first Art Deco buildings in the area. Its overall design and terra cotta ornamentation were partially based on Mayan motifs. It was among the first modern apartment buildings, with 6 elevators, incinerators, electric refrigeration and modern applianaces. It has 800 rooms arranged in apartments of 1, 2, 3, 4 and 5 rooms each. The building got off to a slow start: it had to be reconstructed after original construction was gutted in a 1929 fire. 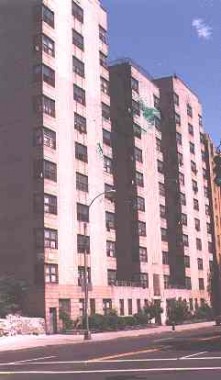 Just south of it is 1001 Jerome. Save Our Parks, a site opposed to the takeover of Mullaly Park for a new Yankee Stadium, says:

The apartment building at 1001 Jerome Avenue (S/NR-eligible), sited across Jerome Avenue from John Mullaly Park, was built in 1937. This Art Deco building is clad in gray brick, rises eleven stories, and is divided into three expressed bays alternating with two recessed bays. The windows of each bay are arranged in columns accenting the building’s verticality. Decorative brickwork also draws the viewer’s eyes upward. 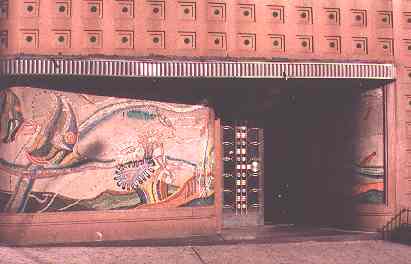 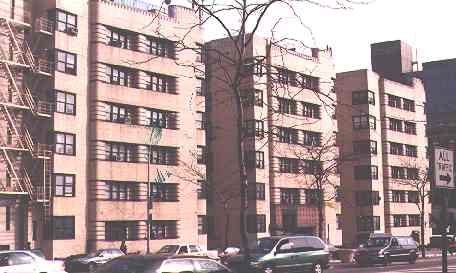 1150 Grand Concourse, the “Fish Building,” features a large aquarium motif mosaic at its front entrance, as well as unusual diagonally-set windows. The lobby and elevator doors are stunning: see this page. 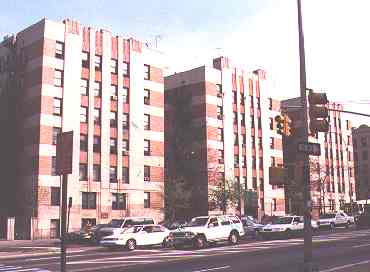 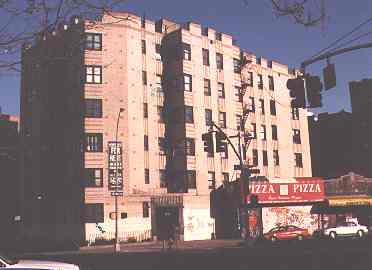 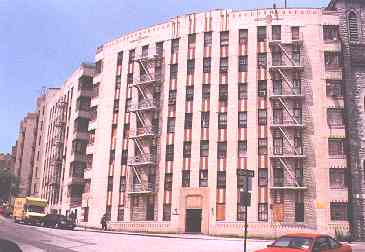 At its western end, Tremont Avenue, the Bronx’s longest east-west avenue, twists and turns to scale several high hills. The turns gave architects such as Jacob Felson, that man again, to construct striking building fronts, like he one at Tremont Towers, built 1936. 1939 and 2121 Grand Concourse, at East 178th and east 181st Streets, are two of many Concourse buildings with dual-direction windows allowing views both of the Concourse in front of the building and looking south along it. 2121 was built by Horace Ginsbern (see Park Plaza Apartments, above.) Paradise in the Bronx

John Eberson’s grand movie and stage show palace on the Grand Concourse and East 187th Street, one of theater builder Marcus Loew’s five Wonder Theaters still standing, opened in 1929 and seated over 4,000 patrons. The lobby was as much a spectacle as the show itself: ornamented like an Italian palazzo, it featured marble pillars, a goldfish pool, carpeted staircases, tapestries and the highest technology for sound and projection. The detail was such that the stars and constellations on the ceiling were depicted in the sky matching the birthday of Loew himself. Eddie Cantor, Al Jolson, Bob Hope and George Burns performed onstage to live music.

In 2005, after years of rehabilitation, the Loew’s was once again reopened by owner Gerald Lieblich as a concert hall, staging salsa and meringue concerts and there are plans to hold gospel, rhythm and blues concerts, beauty pageants, variety and comedy acts, boxing matches and other sports events.

Lobby and facade detail. Click on images in above Gallery for expanded images. photos: your webmaster. Another Ginsbern (1936) can be found at 2255 Concourse. It has a distinctive red and black granite entryway. 3155 Concourse, at East 205th near the boulevard’s northern end at Mosholu Parkway, has retained some of its original casement7 windows on the corners. It is yet another Felson, built in his most prolific year, 1936.

Thanks to Gary Fonville, who snapped these pics in 2000 (others were done by your webmaster in January 2005)