The only thing worse than irrelevance is being perceived to be irrelevant. People, places and institutions can be riding high in April and shot down in May, or, in a wonderful phrase Robyn Hitchcock snuck onto one of his albums, one day, they’re a “number in a drawer.” There’s a little enclave in Queens full of beautiful buildings dating to the 1890s that now finds itself perceived by the seemingly all-powerful developers that are shaping the borough’s face to be last century’s news.

Flushing’s architecture becomes rather drab once you depart from the historic areas in the vicinity of Northern Boulevard. Most of the idiosyncrasies and varied elements have been stamped out long ago to make way for boring, doctrinaire high-rise apartment buildings and attached two-family houses. But when you walk along Ash, Beech and Cherry Avenues between Bowne Street and Parsons Boulevard, the veil lifts and you are in what seems to be another world. 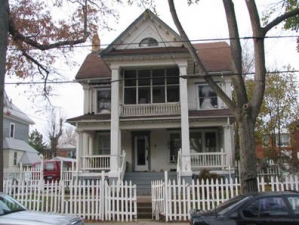 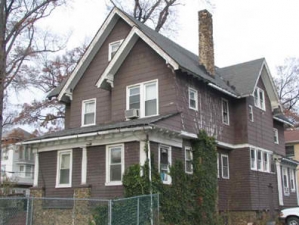 Waldheim is a Flushing enclave that has so far mostly escaped the clutches of developers. Shingle Style, Moorish, Colonial and Classical Revival homes mix with houses that look like early Frank Lloyd Wright. Enormous, 150-year-old trees overhang the blocks, making them cool walks in summer, and the homes are set back a good distance from the sidewalks with many homes displaying well-kept gardens. 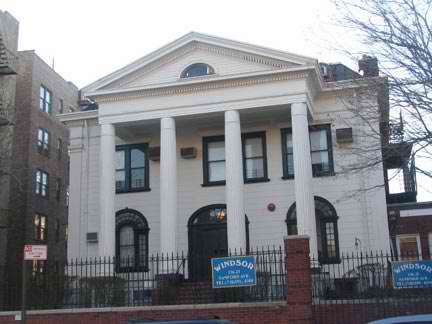 “The significant history of the Waldheim tract began in 1822, when Nathan Sanford, then Chancellor of the State of New York, bought up several farms, with west frontage on Jamaica Avenue (Kissena Boulevard), north frontage along the midblock boundary of Franklin and Ash avenues, east frontage on Parsons Boulevard, and south frontage on what is today Delaware Avenue. In 1836, Sanford built what came to be known as Sanford Hall (left, on Sanford Avenue east of Kissena Blvd.) , an imposing mansion that had most of its interiors surfaced with imported marble. Sanford died in 1839, when the property was acquired by Drs. John and James MacDonald, who established an insane asylum for the very wealthy. James MacDonald was the father of Eliza MacDonald, who was a critical player of the fight for women’s rights in the Suffrage movement, from before the turn of the century until her death in February of 1937 at the age of 90. At one time, the MacDonald family owned an enormous area of Flushing, stretching from the Flushing River on the west to Parsons Boulevard on the east, and from Sanford Avenue on the north to what is today Kissena Corridor Park on the south.”

“The Waldheim portion of the property was known in the 1850’s as the “Backwoods” area, known and loved by Flushing residents who used it as an unofficial nature preserve. It was a heavily forested tract of about ten acres, in an area of Flushing mostly made up of farms and estates. In fact, those ten acres had been sold by the MacDonald family at about that time to a Franklin R. Wallace, and the “Backwoods” land was actually his estate.” 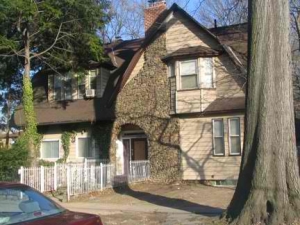 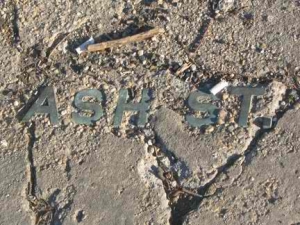 In 1903 Franklin R. Wallace sold ten acres of mostly wooded Flushing property to real estate developers George Appleton and W.B. Richardson. The developers set to work building luxury housing and cutting through streets, named for plants in a likely hommage to Flushing’s former plant nurseries. Many of the old woods’ huge trees were retained as street trees, and the developers named the tract Waldheim, German for “woods home.” A small number of architects under the supervision of Appleton worked on the new neighborhood, which originally attracted Flushing’s wealthier set: at one time, the founder of Buster Brown shoes, the Hellman family of mayonnaise fame, and members of the piano-manufacturing Steinway family lived in Waldheim, as well as Appleton and Richardson themselves. The appellation “Waldheim” fell from favor during World War I.

Paul Graziano: “Appleton and Richardson, through the auspices of their Wallace-Appleton Corporation, designed the streets to be winding and picturesque, with curved corners, yet formal enough to encourage excellent sight lines along Ash, Beech and Cherry Avenues.” 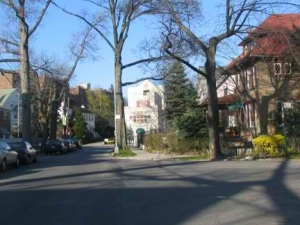 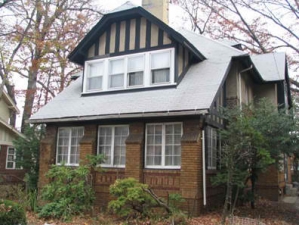 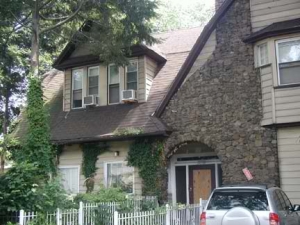 “The first structures built in the project were on the north and south sides of Ash Avenue, from Bowne Street to Parsons Boulevard. Most of these structures remain, except for one mid-block site on the north side of Ash Avenue, and the northwest and southwest corners where Ash Avenue meets Parsons Boulevard. Ash Avenue is perhaps the most aristocratic streetscape to be designed within Waldheim, with formal settings and very imposing structures. Many of these houses are designed in unique interpretations of Colonial Revival, Gothic, Greek-Revival, Romanesque and other styles popular in the last quarter of the 19th century. There are a number of large brick houses, and a number of Arts and Crafts-style ‘cottages,’ with bumpety-stone porches, chimneys and trim. The styles of the structures range from Queen Anne to Classical Revival, with everything in-between being represented.”

As early as the post-World War I era, there were incursions to Waldhiem’s unique character. As Paul has it:

“From 1917 to 1921, during the war years of WWI, there were major restrictions on building throughout the United States. However, after the war ended, there was a tremendous demand for all kinds of housing. In Waldheim, house building began again, with several houses built in a more typical Colonial style, though no less fashionable or sumptuous. Within a few years, the first danger to the solidity of Waldheim came into being: five apartment houses were built between 1926 and 1930. The first structure, a four-story apartment building constructed at the corner of Cherry Avenue and Smart Street, created such an uproar among homeowners that they signed a “preservation action” to prevent any more multi-family development, and guarantee that their community would remain an exclusive enclave of private homes in Flushing. However, soon after this, another building went up. A full blockfront between Beech and Cherry Avenues, dotted with 28 mature maple trees and used as a private park by residents in Waldheim, was developed in 1928 as a six-story, 66-unit apartment building.” 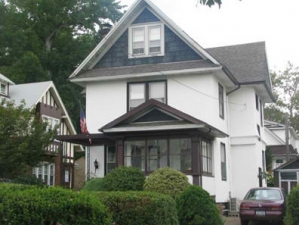 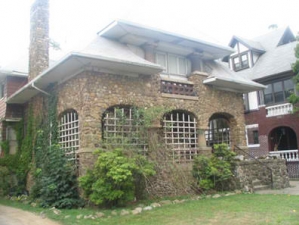 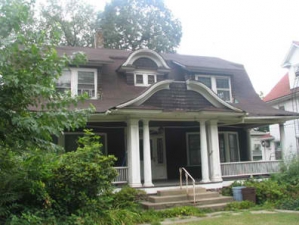 Graziano: “Waldheim continued to be an attractive middle- to upper-middle class neighborhood until the 1980’s, when there began to be a series of damaging incursions. Waldheim, like much of central Flushing, was zoned R3-2 in the 1961 Zoning Resolution, which allows for semi-attached or attached one-, two- and three-family structures not in scale or setback with Waldheim’s housing stock. At the same time, an explosion in the Asian population in Flushing created a need for more houses of worship in the Flushing area.”

Shock of the New 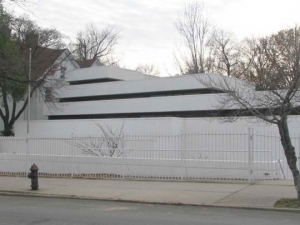 “The Nichiren Shoshu Temple, Daihozan Myosetsu-Ji,a Japanese Buddhist temple that the American Institute of Architects (AIA) Guide to New York City describes as “Serenity without dullness: a testament to the expressive possibilities of thoughtful architecture, even when rendered in ribbed concrete block.” It is a low, graceful building, and certainly an interesting replacement structure.”

The Future of Waldheim

Sadly, the Buddhist temple is the exception: a modern building that, by its tranquility and beauty, compliments the surrounding older dwellings. Newer development has been accelerated in recent years, and it is strictly cost-effective, multi-family buildings I like to call “Fedders Specials” with uniform shades of blond brick and exposed water meters (do federal or state guidelines mandate that the meters have to be so easily accessible?) 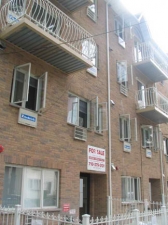 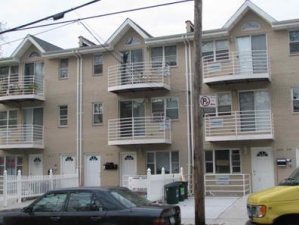 Actually these are Friedrich air conditioners, but you get the idea. The terrace fences are already rusting, and the building hasn’t even opened yet.

Graziano: “Waldheim’s housing stock has become unstabledue to the recent events which have taken place. These developments have caused some panic selling in the neighborhood, and now several of the houses are being rented by the room as SRO’s (single room occupancy hotels) by absentee landlords. Now, remaining properties are beginning to suffer grievously: front gardens are being paved or concreted over for more parking; illegal curb cuts are taking away form the unified streetscape, and the original sidewalks and curb gardens are being filled in with concrete.” 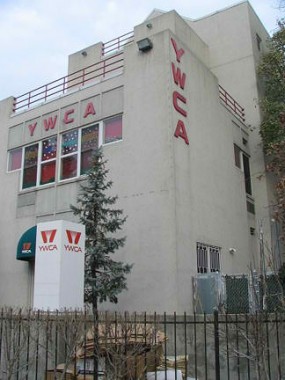 Ash Avenue between Parsons Blvd. and 147th Street was demapped to make way for this incongruous YMCA building.

A building like the one on the right has made way for the bulldozers; probably, a multifamily unit, ready for the 21st Century, will replace it.

…Since the late 1980’s, about a dozen of Waldheim’s roughly 60 historic homes… have been razed, the pace of their destruction accelerating in recent years as the need for rental apartments for the swelling immigrant population has grown.

“Preservation-minded residents, who failed repeatedly to persuade the city to protect Waldheim by designating it a historic district, are now pinning their hopes on a rezoning plan being developed by the city’s Planning Department that would limit construction…

“But many owners of the old houses on Cherry oppose new limits on building heights, which could lower the price they can get for their homes.

”What we don’t want is down-zoning for an area that’s already been carved up and already has seven- and eight-story buildings,” said Frank Percoco, president of the Cherry Robinson Homeowners Association.

“The Planning Department expects to begin public review of a rezoning proposal by May.

“But some preservationists fear the deliberate pace is prolonging the demolition surge. By the time any rezoning takes effect, said Stephanie Janis, a board member of the Waldheim Neighborhood Association, ”some more cement will be poured for new development.” 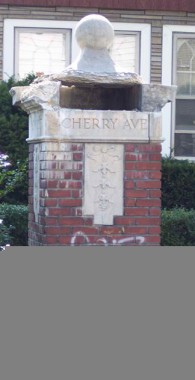 A lone encouraging sign is that the twin gateposts on Bowne Street and Cherry Avenue have been recast since the photo was taken, and are now as good as new.

For more information, send an e-mail to waldheimassociation@hotmail.com.

“In a Historic Queens Enclave, Efforts to Fend Off the Bulldozers.” John Freeman Gill, NYTimes, January 8, 2006

MEET ME AT… Those mysterious names over apartment building entrances.

Not sure if you’ve been to Waldheim lately, but the rezoning a few years ago has significantly slowed/nearly stopped the tear-downs. Also the city’s tree-planting program has helped restore the feel of the neighborhood a bit, though it will be a few years before these newly planted ones grow to be more like the ones that were ruthlessly being chopped down until recently.