LIVING FOR THE CITY. My first visit to City Hall station since 1998

EVEN though I have chronicled NYC’s lost, magnificent City Hall Station a number of times in Forgotten NY I had only visited once before, in a 1998 Transit Museum tour that occurred before Mayor Rudy Giuliani closed (presciently, it must be admitted) the old station to touring, fearing terrorism. I just went back again (7/06) for the first time in eight years, a lifetime in Forgotten-hood.

City Hall Station opened October 27, 1904, along with the other Original 28 New York City subway stations that were along the original subway line that today makes up parts of the #6, Times Square Shuttle, and #1 trains. It closed in December 1945 because of a lack of traffic at the station and that longer subway cars were making for very large, dangerous gaps between the cars and the platform. 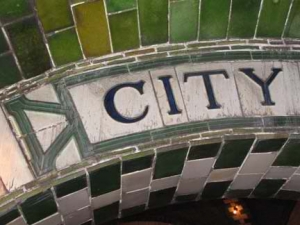 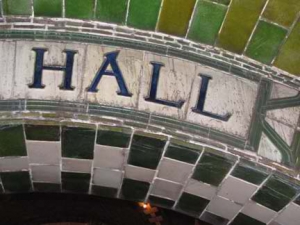 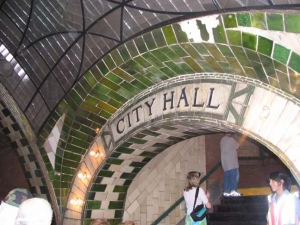 The City Hall station is totally unique. None of its architectural elements (its ogee curves and polychromatic tile), none of its lighting schemes (both artifical and natural), and none of its signage techniques are repeated elsewhere in the New York City subway system.

The bare bulbs that line the entrance arch were unpilferable, since their screw threads were reversed; they could not be used in any other light sockets but these. This practice was repeated at other NYC subway stations until the onset of fluorescent lighting in the 1950s. 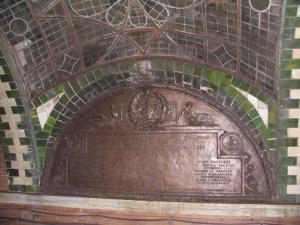 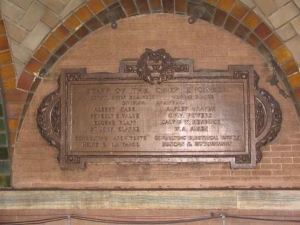 Plaques honoring the Rapid Transit Subway Construction Co., which built NYC’s first subway between 1900 and 1904, were hung on alcoves formed by the station’s ogee vaults on the far side of the tracks when the station was opened. They honor the subway builders’ staff, directors, engineers, and financiers, including August Belmont, Cornelius Vanderbilt, and John D. McDonald. Between 1945 and 1995 these were removed to the nearby Brooklyn Bridge station, but in 1995 they were put back in their original positions, where, unfortunately, very few except tunnel workers can see them. The plaques were executed by John Gutzon de la Mothe Borglum (1867-1941), who went on to create the Confederate monument at Stone Mountain, GA and the Presidential memorial at Mount Rushmore, South Dakota. 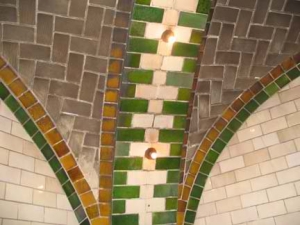 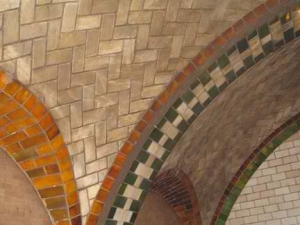 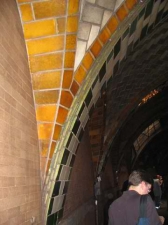 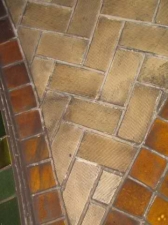 A look at the green, white, brown and gold tilework, as well as the interlocking Guastavino tiles that can be found on the arched vault. 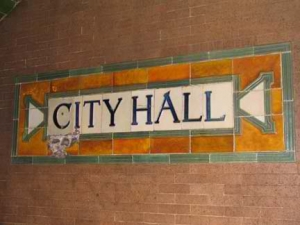 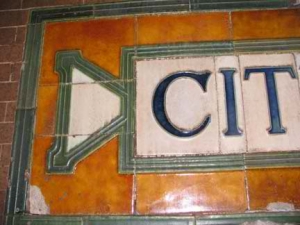 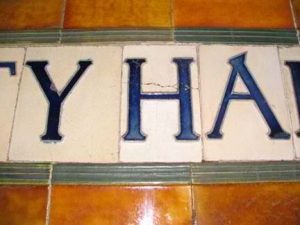 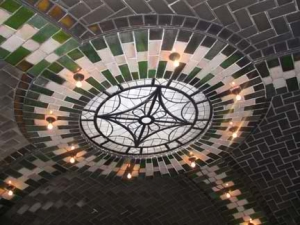 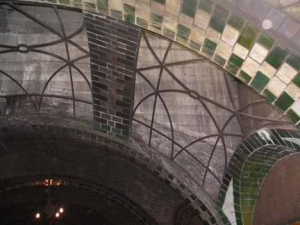 If I’m not mistaken (correct your webmaster if I’m wrong) City Hall is, or was, the only station lit generously by natural light. Several stations on the uptown West Side IRT (#1) get considerable sunshine, but that’s because of the position of ventilation grating. It must also be said that many stations on the “Original 28” had skylights that permitted plenty of sun. This philosophy is being renewed on the planning boards for the new WTC Santiago Calatrava PATH station and Fulton Street Transit Hub, both of which (when/if ever completed) will likely allow plenty of sun.

At the onset of World War II City Hall’s glass skylights were leaded over. Since then, the glass has fallen out of some of the skylights and only the metal framework remains. In 2004, with City Hall’s centennial, the City replaced the glass in one pair of skylights and also restored the circular skylight at the station’s mezzanine (left photo). However, these too have been untouched since the celebrations of that year. Natural light wasn’t quite enough to light the platform safely and so, chandlier-like fixtures have been present from the beginning. The originally featured glass luminaires, but vibrations as subway equipment got ever heavier doomed them. They have had just bare bulbs (once again, with reverse screws) ever since.

Agree on a platform 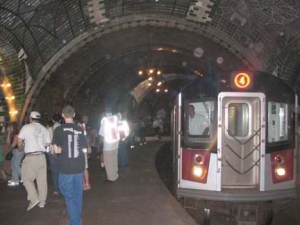 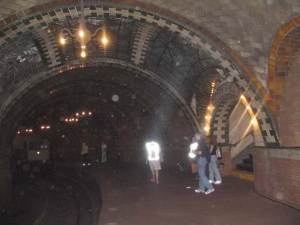 The combination of the shortest platform in the system and modern subway equipment makes City Hall the loudest station in the sytem, with dB levels that must surpass 100 when trains pass through. Since very little other than absolutely necessary maintence is performed here, the air is thick with dust.

It is clear that City Hall Station shouldn’t be permitted to waste away in its current state: the optimum solution would be to open it somehow as a transit museum annex. Perhaps the platforms could be protected with plexiglass and the noise could be baffled somehow. Security would be more daunting: the station is at Murray Street and Broadway, well within City Hall’s Protected Zone. Contact the Transit Museum with requests and perhaps a restoration could get underway in what the MTA calls the “crown jewel” of its system. It’s pretty tarnished, as are so many of NYC’s so-called “crown jewels.”

BUT THAT’S NOT ALL. Let’s go topside and see what secrets can be found in City Hall Park.

LIVING FOR THE CITY Part 2

[…] Beautiful, beautiful, beautiful. This is one of the original twenty-eight stations of the New York City subway, opened in 1904. Unfortunately, as train cars got longer they became incompatible with the tight curves of the subway platform and the station was closed. There are more pics of this station here. […]