On this page I continue to explore the fascination I have with the human faces, monstrous images, or combinations of both, that appear on buildings around town that were mostly built in the Beaux Arts or Victorian era, 1850-1900. Though I’m aware they have their origins in myth as far as design is concerned, and owe a debt to medieval gargoyles, or water spouts, I know very little about how they obtained their design, and would like to know more. 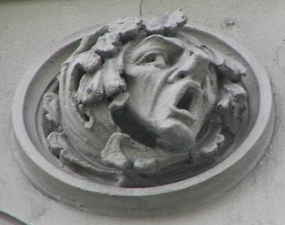 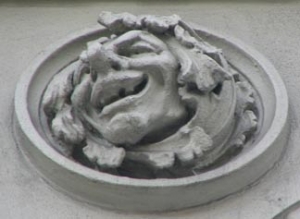 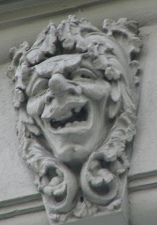 These heads on 14th Street between 6th and 7th Avenues obviously owe a great deal to theGreek comedy and tragedy masks of old, but the sculptor also threw in a Loki-esque grimacing face. Did the architects commission these, or were they just serendipitously tossed in by the artists? 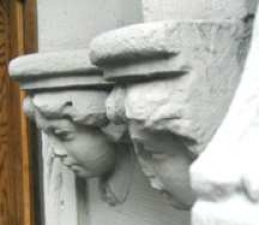 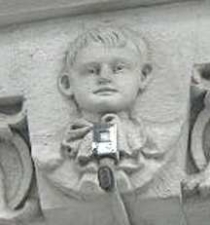 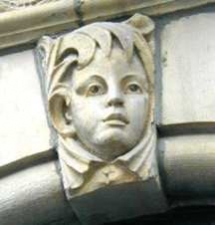 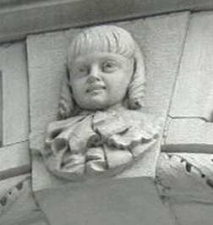 These appear on West 80th Street. (Since I shot many of these pictures as early as 2001 – FNY has a big backlog – I don’t know the exact address.) There’s no doubt in my mind that these are the children of the architect. Since the Upper West Side was developed between about 1880 and 1910, the kids are likely long dead by now, and these may well be the only way we can remember them. 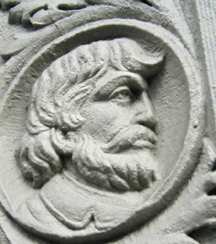 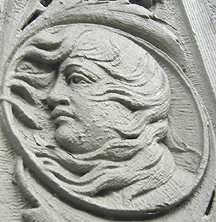 And the parents perhaps? 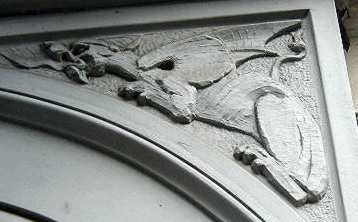 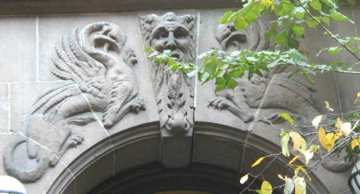 Could these be representations of the Roman lares and penates? These were household spirits worshiped in the early days of the Roman Empire; they were old gods that predated the familiar ones from Mount Olympus fame.

The spirits of the household were the lares and penates. The lares were the spirits of the families’ ancestors. They were represented by little figurines which would be kept in a special cupboard. Among them the lar familiaris, the family spirit, was the most important. On a everyday bases short prayers and small offerings would be made to the lares. And on the more sacred days of the month – the calends, ides and nones – or on special days like a wedding, birth or birthday, more elaborate rituals were held in their honour.

Meanwhile the penates were the spirits of the larder. thanks were given to them for keeping the family fed. They too were represented by little figurines and they too had their own little cupboard they resided in. But they would tend to be taken out and placed on the table during mealtimes.

When the family ever moved house, then its lares and penates invariably moved with them. 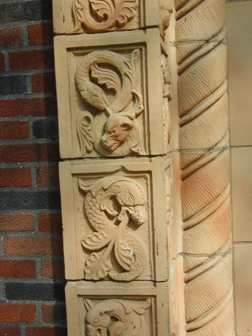 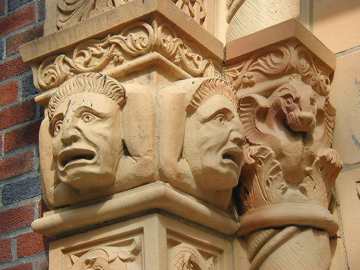 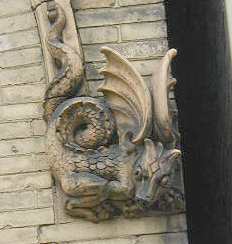 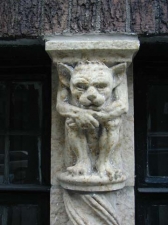 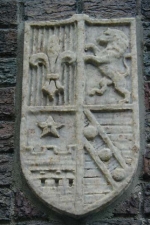 The building on the NW corner of Irving Place and East 19th Street contains a repeating series of about 5 or 6 sculptures of gnomes and creatures. The one with the wings seems to have the Yellow Kid‘s head. (The Kid, the first comic strip recurring character, was drawn by sometime Flushing resident Richard Felton Outcault, whose most enduring character other than the Yellow Kid was Buster Brown. I shot these on Manhattan Avenue on the UWS in November 2001, a time of year when the shadows are at their lengthiest. We have our usual compliment of Green Men, above-door heads and siren-like caryatids. 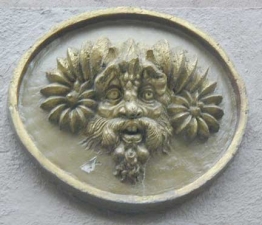 LIVING FOR THE CITY. My first visit to City Hall station since 1998