In January 2005 I walked the Bowery and documented the remains of its old-time flophouse – and wholesale lamp and kitchen supplies ambience. I don’t lament its demise; though I’d rather affordable housing built in a style commensurate with previous traditions take the flophouses’ place, modern-day realities dictate that only the well to do will have housing built for them in Manhattan.

The Bowery is rapidly being built up with luxury housing rising alongside the old storefronts. Formerly shrouded with an el that hid whatever nefarious activities took place beneath, the Bowery, no matter what it becomes in the future, will always bear the legacy of a place where you went when there was nowhere else left to go.

I last saw the Suicide Hall, festooned with a skull, in early 2005. Saloonkeeper John McGurk, his singing waiters, sailor clientele, bouncer Eat-Em-Up Jack McManus, and the doomed Blonde Madge Davenport are now ghosts, and since my previous visit, additional ghosts have joined them. Luc Sante in Low-Life: [McGurk’s] was four stories tall, with a deep interior and a large back room, with a direct entry to the baroom for gents and one through along corridor for the women. Entertainment consisted of singing waiters and a small band; the customers were, as ever, mostly sailors. “It was said,” noted a contemporary, “that his business card reached every seaport in the world.” Per habit as well, the waiters, led by headwaiter Short-Change Charley, were equipped with chloral hydrate, and they were enforced by a formidable bouncer, a mayhem specialist named Eat-Em-Up Jack McManus…McGurk’s was nearly the lowest rung for prosititutes, having taken over that position from the waterfront dance houses of the previous generation; hence the suicide craze that gave it its name and, incidentally, its grisly lure as a tourist attraction. Figures are unreliable or uncertain on the total number of self-killings that went on there, but in just one sample year, 1899, there were at least six, as well as more than seven attempts. In October of that year, for example, Blonde Madge Davenport and her partner, Big Mame, decided to end it all, and so they bought carbolic acid, the elixir of choice, at a drugstore a few doors away. Blonde Madge was successful in gulping it down but Big Mame hesitated and succeeded in spilling most of it on her face; the resulting disfiguration resulted only in getting her barred permanently from the place….

John McGurk was finally forced out of business in 1902, but retired to California with an estate rumored to be in the neighborhood of half a million. His Suicide Hall stood another 104 years. 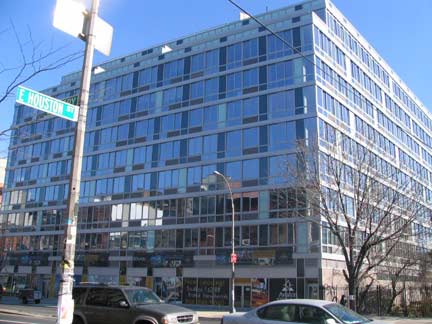 In 2007, developer AvalonBay Communities is constructing three gleaming Bowery projects that total more than $300 million, including this one on the Bowery between Houston and East 1st Street that has assumed the place of McGurk’s. According to the NY Sun, Avalon hopes to fill 36,000 square feet of retail space, hoping to engender a NoLiTa (North of Little Italy) boutique atmosphere. A Whole Foods has already moved into the Avalon building across Houston. 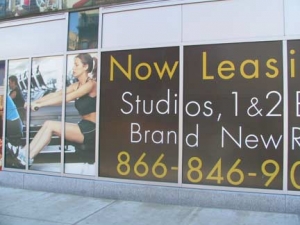 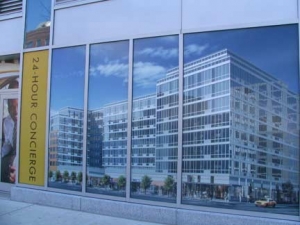 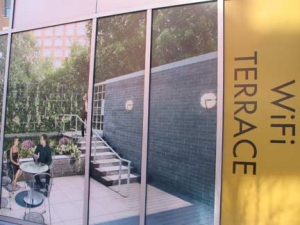 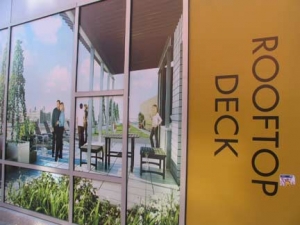 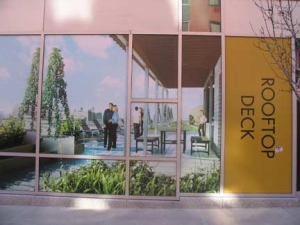 Off to Bowery in the Green It was touch and go for awhile, but the Liz Christy Community Garden will now be a Gulliver among the new Bowery Brobdingnagians.

In 1973 a local resident named Liz Christy and a group of gardening activists known as the Green Guerillas were planting window boxes, vacant lots with ‘seed bombs’ and tree pits in the area. They saw the large rubble-strewn lot as a potential garden and in December went to the City to find a way to gain official use of the land. Volunteers hauled the garbage and rubble out, spread donated topsoil, installed a fence and began planting.

On April 23, 1974, the City’s office of Housing Preservation and Development approved the site for rental as the “Bowery Houston Community Farm and Garden” for $1 a month. Sixty raised beds were planted with vegetables, and then trees and herbaceous borders were added. In their second year this forerunner of today’s urban community gardens won its first Mollie Parnis Dress Up Your Neighborhood Award. People from other neighborhoods in all five boroughs saw what could be done and wanted information on how to start similar projects. lizchristygarden.org 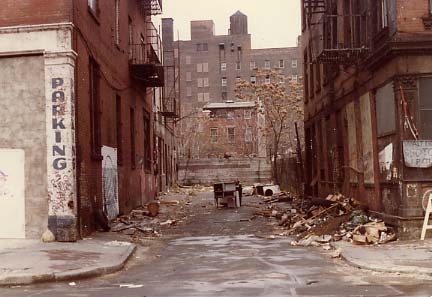 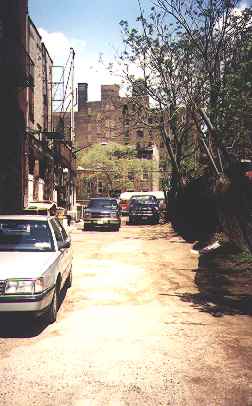 Avalon has big plans for Extra Place, hoping to convert it to a “slice of the Left Bank, a pedestrian mall lined with interesting boutiques and cafes.” 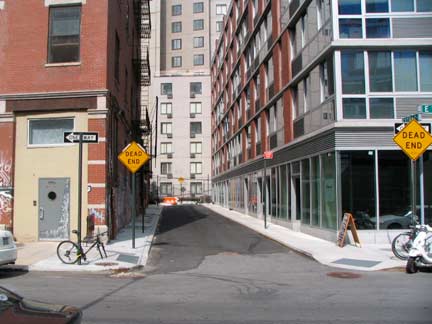 Women’s Wear Daily: [Retail consultant Williams Jackson] Ewing envisions the eight shops at Extra Place as selling apparel, accessories, handbags, belts, jeans, shoes and jewelry. “We’re working with a French bakery, which will do a cafe with seating that will spill out onto the street.”

Rents on Extra Place will be below market value to make the spaces affordable to first-time store owners. “SoHo is so expensive now. That, coupled with the fact that the chains have moved in, has made it really hard for someone starting out,” he said.

Even rents on the Bowery have gotten pricy, Ewing said, noting that $100 a square foot and up is not uncommon.

“We’ve had more prospects for Extra Place than any other phase of this project,” Ewing said. “For a designer there’s a comfort to knowing who will be around them.” via Curbed 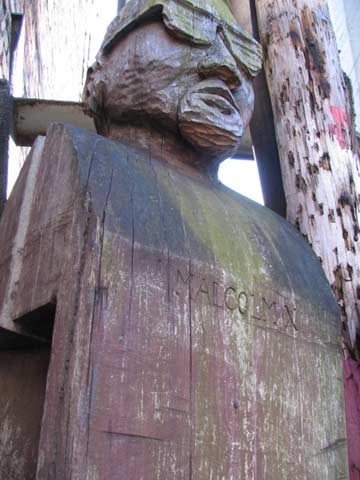 About a block away on East 1st, just east of 2nd Avenue, there’s an empty lot on the south side of the street and as your webmaster was stumbling past one fall afternoon in 2006…there it stood, a wood carving of Malcolm X about the same height as me, or maybe a little taller.

Ghosts of Punks Past

For over thirty years, CBGB was a Bowery mainstay just across East 1st Street from the old Suicide Hall. Punk began in New York City in the early 1970s with bands such as the Neon Boys (who later became Television), the New York Dolls and Forest Hills’ finest, the Ramones. Hilly Kristal, who had earlier met with middling success running “country, bluegrass and blues” clubs, began booking the new, raw sound that was bubbling up from the concrete. A music scene was born that resonates today. 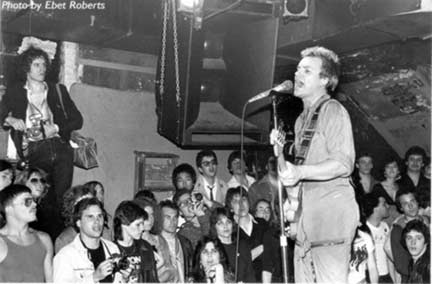 Hilly Kristal opened Hilly’s on the Bowery in 1969, closed it in 1972, and reopened it in December 1973 as CBGB, with Tom Verlaine’s band, Television, debuting there in March 1974. Soon to follow were The Stillettoes (later Blondie) and the acts who put Kristal’s club on the map, the Ramones and a poet who had been on the scene for awhile and tried her hand at rock, Patti Smith. The club’s epic history can be found in Clinton Heylin’s From the Velvets to the Voidoids and Roman Kozak’s This Ain’t No Disco. CBGB stood for Country, Bluegrass and Blues, which is what Kristal originally intended to feature.

In 2006, the club was finally bought out of its Bowery locale and hosted its farewell show, with Hilly vowing to reopen in Las Vegas. He passed away in 2007. 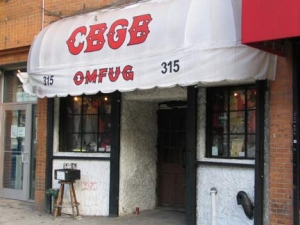 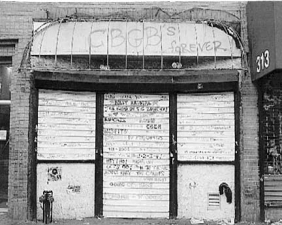 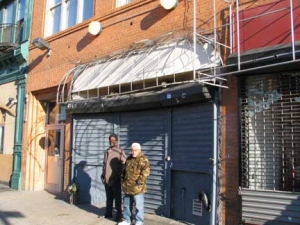 I only caught one show at CBGB. It was in November 1981 and Certain General, a band my friend Steve Graziano, a former New York Rocker writer, was managing, played on a Sunday afternoon. I remember watching the Jets beat the Giants before heading into town for the show. I had liked Certain General, especially their debut, Hello My God, and may have caught ’em even if Steve wasn’t involved. I spent some time in the downtown scene with Steve in the early 1980s and met some of the musicians he was associated with (Eugene Reynolds of the Revillos, I remember in particular). In the early 1990s, Steve moved to Charlottesville, VA and we lost touch.

I was very sad to learn that Steve passed away from heart failure in 2005 and always thought we would refamiliarize. I always believe I’ll reunite with old friends, and sometimes that happens, and other times, you never get the chance. While developers attempt to Botox and make over the Bowery, the wrinkled old gal can still be seen in its middle to southern reaches, where it is still NYC’s capital of kitchen and lamp wholesalers. CBGB isn’t the only defunct music hall on the Bowery, which in the mid-19th Century was NYC’s music and entertainment capital. Theatres decamped first to the Union Square area, then to Madison Square, and finally to Longacre, now Times Square.

Could just be my eyesight but I think the photo after Hilly Kristal is Sting/The Police. That’s just about the time frame when they were starting and playing local clubs.