SLOPE AND ANCHOR in Brooklyn

Your webmaster and Park Slope have an ambiguous history. In the 1980s and on into the 1990s, several friends and a cousin lived within a few blocks radius, and I spent many late nights in one house or another. Of course that meant lengthy waits at the bus stop at 2 or 3AM for your auto-free correspondent (in all those years, that’s possibly monthsof waiting I’ll never get back).

Walking through Park Slope’s streets these days, I’m awed by the architecture and annoyed by the fact that real estate has inflated so much that barring a MegaMillions win I’ll never afford an area like this.

Then I found an anchor in front of a building, and ForgottenInstinct took over. 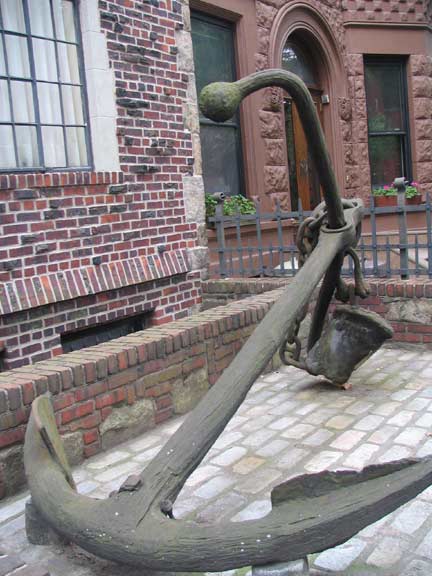 What can a rusty anchor be doing outside 874 President Street in Park Slope? 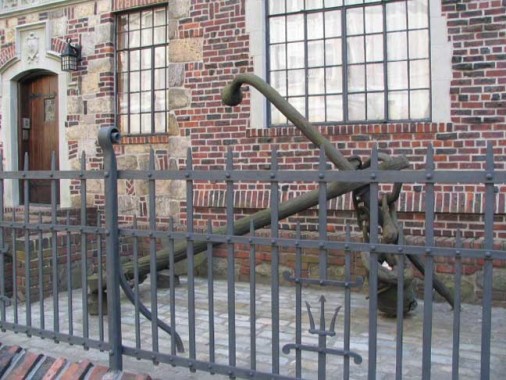 And this is an old school anchor, too, the type Popeye would throw at Bluto after swallowing a can of Green Giant spinach. It’s officially known as a “stock” or “Admiralty pattern” anchor, with the “stock” being the top crosspiece. Traditionally the stock is perpendicular to the two hooks at the bottom of the anchor; this made embedding it on the bottom easier. In the modern era the stock anchor is used primarily for rocky bottoms; a plethora of modern anchor designs have been devised for use depending on sea bottom conditions, such as the fluke, grapnel hook, and plow varieties. wikipedia

Before we ascertain what the anchor is doing here, let’s take a brief look at our surroundings. 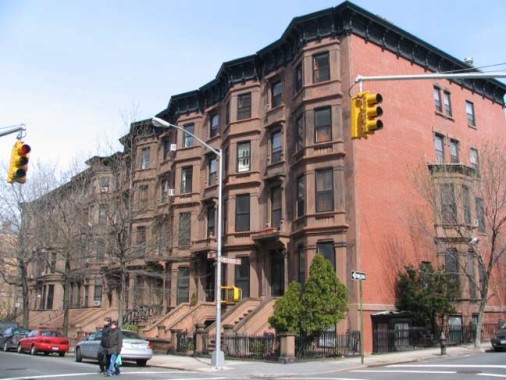 NE corner, 8th Avenue and President Street. Our anchor is located in front of 874 President Street, which, in the quirks of Brooklyn house numbering, is not between 8th Avenue and Prospect Park West (which takes the place of 9th Avenue) as you’d expect, but between 7th and 8th. This section of Park Slope is its showcase region, where the leading architects of the day strutted their stuff between 1875 and 1900. Blocks such as nearby Montgomery Place are almost entirely given over by their developers to leading lights such as Charles Pierrepont Henry Gilbert. 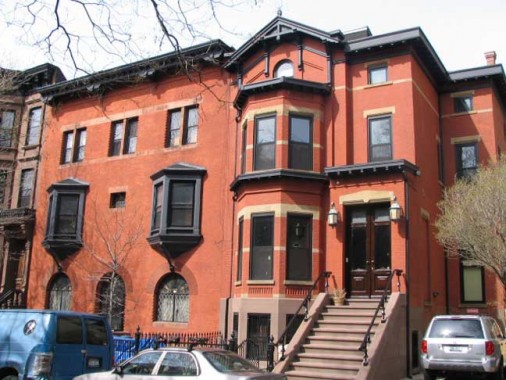 Directly across the street from the anchor we find 869 President, the Stewart Lyndon Woodford House. Woodford (1835-1913) was an attorney, Civil War brigadier general, NY State lieutenant governor, United States Congressman, and ambassador to Spain. He hired Beaux-Arts schooled architect Henry Ogden Avery to design this distinctive 3-story red brick house completed in 1885. One of the hallmarks of the era is the clever way in which builders used different geometric shapes on the same building, and here we have arches, triangles, circles, and rectangles all mixed together in a coherent, dignified whole – that looks especially good in late afternoon when the sun hits it. The building is home to the Missionary Servants of the Most Holy Trinity, a Catholic organization dedicated to helping the poor. 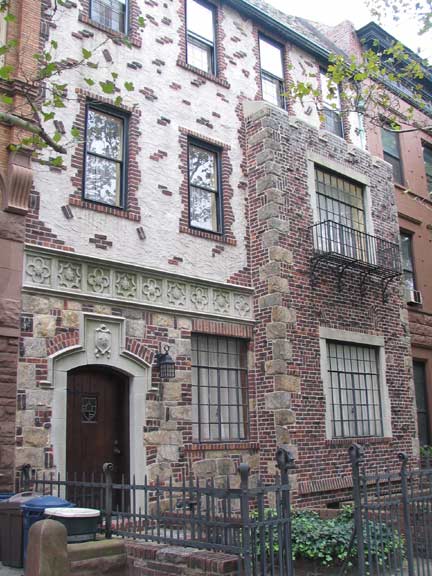 Even if there weren’t the unusual nautical addition,874 President would be an attraction in itself. It’s an attractive Tudor -style townhouse with interesting varicolored brickwork, stonework above the doors and casement windows.

Different theories have abounded as to how old the anchor is and how it got there. Some say it belonged to Herman Melville, who never lived in Brooklyn. Others say it was the property of cotton trader Charles Burckett (1821-1894) who lived in the building late in the 19th Century.

874’s owner, retired seaman Peter Groeger, has lived in the building since 1960 and reports that the anchor found its way here in 1968. It was tangled in a fisherman’s net off Cape May. Groeger purchased it for pennies on the pound and transported the over one-ton anchor to 874, and it’s been a conversation piece here ever since.