Well, there are a number of hidden alleys in Brooklyn (and FNY will ferret them all out eventually) but one that has continually escaped the Department of Transportation as well as nearly all the mapmakers over the years (including google maps, which is jusually pretty thorough) is a little court hidden behind Coney Island Avenue in those borderlands where Kensington meets Ditmas park meets Parkville. I speak, of course, of Corbin Court, which runs in back of one of Brooklyn’s shambling, decrepit old piles and in front of a double-porched home that could stand a little TLC. 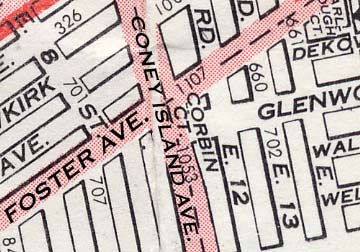 Only the American Map Colorprint Atlas of NYC, which, upon swallowing Hagstrom about 20-25 years ago, discontinued this map in favor of Hagstrom’s, correctly places Corbin Court between Foster Avenue and Glenwood Road east of Coney Island Avenue; no other map currently available, except Property Shark’s, will show it, and I won’t link to the Shark since it wants money if you play around with the maps a lot.

NYC’s Department of Transportation doesn’t sign the street. Serendipitously one of the doors on the west side of the street (toward the right in the photo left) identifies it, the only such identifier on Corbin Court.

Could Corbin Court be named for Austin Corbin, the imperious railroad baron who controlled several railroads, including the Long Island, in the late 19th Century? Corbin Place in Manhattan Beach is named for him, and one of his railroads, now the B/Q subway line, runs nearby. 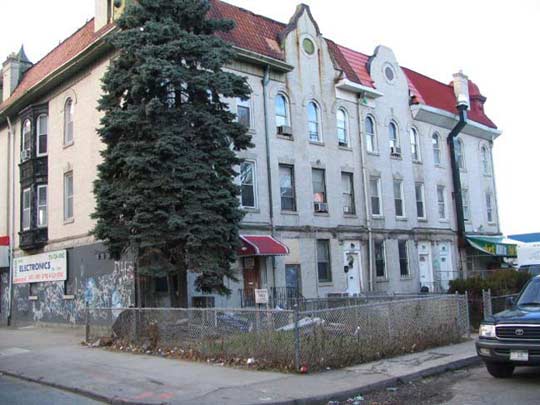 The presence of the court is likely due to this grand old war horse, which occupies the whole block bordered by Coney Island Avenue, Glenwood Avenue and Corbin Court. The court is likely the alley that carriages used when pulling up to the building. Coney Island Avenue used to be called Coney Island Plank Road (built in 1850) and later the Coney Island and Brooklyn Railroad (instituted in 1862) ran nearly its entire length. The CI&BR’s president was General Henry Slocum — the same general for which the ill-fated General Slocum steamboat that caught fire on an East River excursion in June 1904, killing over a thousand passengers, was named.

The CI&BR later converted to horsecar operations, later electrified trolley, and has today evolved into today’s B68 bus.

The house has been divided into apartments, some of which face on Corbin Court. 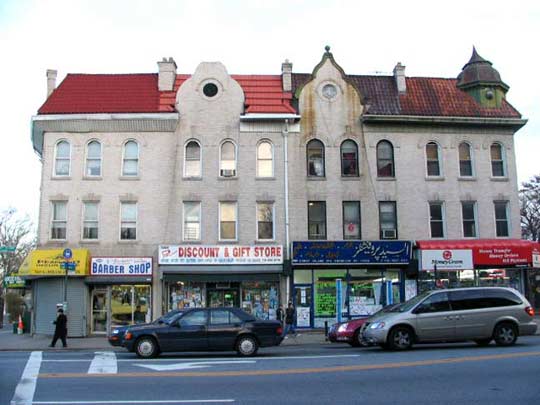 A once-proud building–check those 3rd-story arched windows, which go all the way around, different roof treatments, and corner cupola. The old gal was something in its day.

You say “shambling, decrepit old pile,” but some of us call them home! Love the little circular windows–I’ve always been intrigued by this building and its alley.

Wow What wonderful info. Thank you for the time you spent on this post.

I lived 2 blocks away from there for the first 28 years of my life and I never knew it had a name. I always just called it the alley.

[…] now part of sanitation’s regular route for collection and street cleaning. Forgotten NY has some guesses on its origins (for carriages), but you still won’t find a street name sign on the […]

Wow, big changes! My ex-husbands home was in that alley. I have only great memories of that place, wonderful memories, but so sad to see it’s nothing like it used to be.

Around June of 2017, NYC placed a street sign on the lamp post, identifying this alley as Corbin Court. Prior to that, thinking the alley had no name, I had long toyed with the idea of putting up my own street sign and naming it after my grandfather, who had been a physician that lived in Brooklyn during his later years. Austin Corbin was a notorious anti-Semite, who actually advocated genocide. Some years ago, when Manhattan Beach residents found out about that, they creatively put up a plaque declaring Corbin Place to be named after Mary Corbin, a heroine of the Revolutionary War. With this posting, I hereby declare that Corbin Court is not named for Austin Corbin, but is instead also named for Mary Corbin.

CORRECTION: After writing the above comment, I further researched the woman Revolutionary War heroine with the surname Corbin. Her firast name was not Mary. It was Margaret. Therefore, I hereby declare that Corbin Court is named for Margaret Corbin.

CORRECTION AGAIN: In the above, firast (I think I may have invented a new word) should have been first. But I guess anyone reading the
statement will have assumed that. And woman Revolutionary War heroine was redundant. If she was a heroine, she was obviously a woman!

See https://argyleheights.blogspot.com/2016/12/let-us-now-praise-less-than-famous.html for recent research on Corbin Court which atributes the alley’s name to the master builder, John R. Corbin, who erected most of the one family homes in West Midwood–as well as the large building stradling Corbin Court itself.