A walk down several streets of the East Village, especially St. Mark’s Place, Cooper Square, 2nd and 3rd Avenues, and east 6th and 7th Streets, and you’ll notice dozens of lampposts whose bases and lower halves are covered withe ceramic tile, glass, broken crockery, rhinestones, terra cotta and other small decorative pieces. Some are arranged in patterns that spell out the names of fallen firemen on 9/11/01; politicians; local landmarks and theatres. They are all the work of Irish-born Vietnam vet Jim Power, who has been adding this embellishment for over twenty years and has become a beloved East Village institution.

The wildly colorful, jagged-edged mosaics are cleverly infused with a vibrating primitivism that unifies Power’s public works. A myriad of ceramic squares and slivered tiles, angular pieces of broken plates and a plethora of found objects make up Power’s palette. A typical light pole has more than a thousand tiles; the eight-foot pole at Eighth Street and Broadway has more than 2,800, with two small plates stacked on top of one another to form the number 8. A tribute on another pole is to emergency service workers during the 2003 blackout, another highlights the old Yiddish theaters, the Bowery Boys, Burns and Allen, Charlie Parker. The Villager 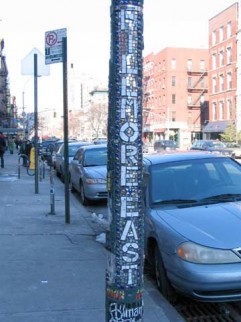 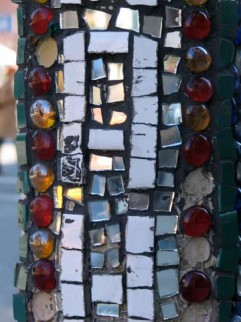 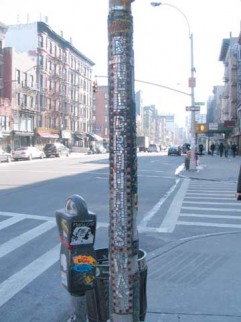 Power’s work is especially necessary at the NW corner of 2nd Avenue and east 6th Street, the site of the 1968-1971 Bill Graham rock palace, the Fillmore East. Graham took over the old cinema/Yiddish theatre in early 1968 and for two full years and part of two others presented a roister of superstars that to this day reads like a classic rock radio playlist. Just about every big name in rock and roll except the Beatles and Stones played the Fillmore East (Graham’s east coast counterpart was the Fillmore West in San Francisco.)

No official plaque marks the spot of the Fillmore East(and none, for that matter, marks the locales of other legendary NYC rock venues such as CBGB, the Palladium, Bonds of Times Square, Folk City, Max’s Kansas City, the Peppermint Lounge (either of them), Danceteria, the Ritz, the Lone Star Cafe…I could go on. Even Shea Stadium will expire at the end of 2008. That’s why we need “guerrilla” commemorators such as Jim Power. I hope others pick up his baton and celebrate our other late great rock venues similarly. A few years ago, your webmaster photographed the locales where they were located, but it was so depressing to see how mundane they’d become since the stages closed down that I never proceeded with a Forgottenpage about them. Perhaps I can do them one by one in ForgottenSlices. 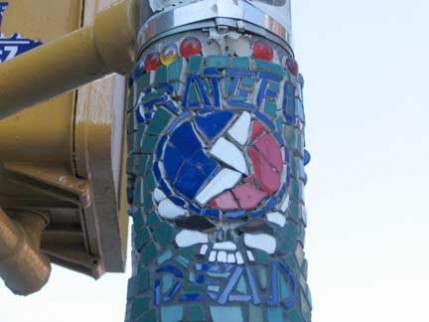 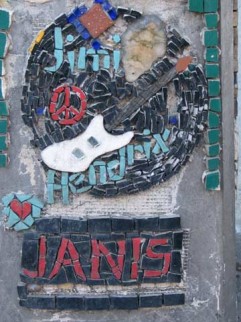 Above: Stub from Lee “Do You Know What I Mean” Michaels‘ Halloween 1970 show.

The Fillmore had a capacity of over 3600 seats. The venue was so popular that bands were often double-booked to play two Saturday and Sunday shows apiece, as well as matinees. The Doors, The Who, Quicksilver Messenger Service, The Allman Brothers Band, Derek and the Dominos, Jimi Hendrix, Country Joe and the Fish, Big Brother and the Holding Company, Lonnie Mack, Humble Pie, Led Zeppelin, Neil Young and Crazy Horse, Pink Floyd, Procol Harum, John Mayall, The Byrds, Jefferson Airplane, Frank Zappa, Miles Davis, and toward the end of the Fillmore’s run, an up and comer named Elton John are just a handful of the big names that played here, as well as lesser-known bands such as Sweetwater, Bloodrock and Zephyr. Numerous classic live albums were recorded at the Fillmore such as the Allman Brothers Band’s At Fillmore East, Ladies and Gentlemen: The Grateful Dead: Fillmore East: April 1971, and Frank Zappa and the Mothers of Invention’s Fillmore East – June 1971. 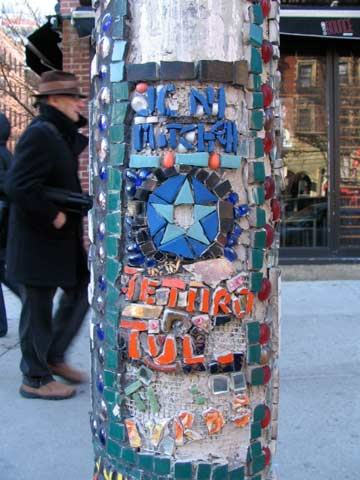 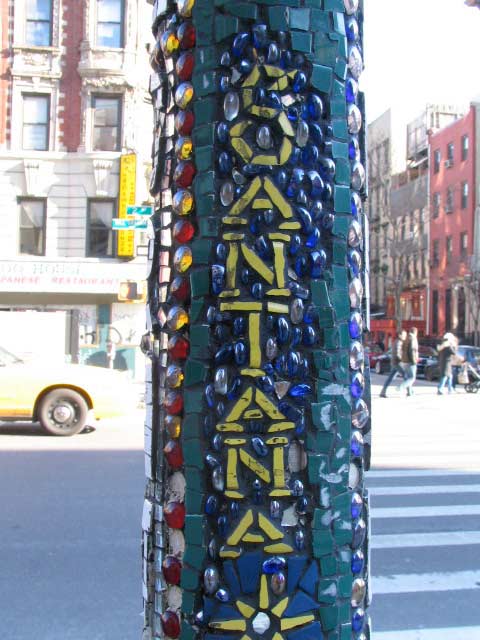 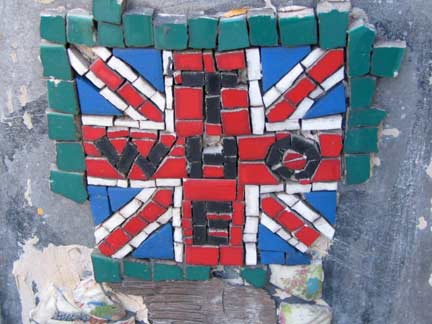 The Who played Fillmore East prior to the band’s Tommybreakthrough, and after: April 5-6th, 1968 and May 16-18, June 5-6, and October 20-25th, 1969. The May 16, 1969 show was particularly memorable: a fire broke out next door that ultimately gutted a five-story apartment building and a supermarket. During the Who’s set, a plainclothes policeman jumped onstage and attempted to grab a microphone; Pete Townshend kicked him in the bollocks, as the British say. (Talk about yelling fire! in a crowded theatre.) The cops wanted to charge Pete with assault, but he wound up paying a fine. A few months later, Pete similarly ejected activist Abbie Hoffman from the stage at Woodstock, NY when he interrupted the Who’s set. 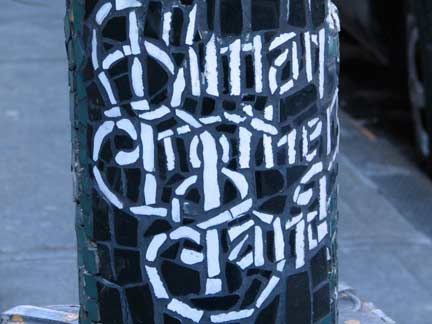 The Allman Brothers Band played Fillmores East and West so often, they were called “Bill Graham’s house band.” They played here on 2nd Avenue February 11-13 (third on the bill under the Dead and Love), Sept. 23 and Dec. 11-12th, 1970, and March 11-13 and June 25-27, 1971. Those last dates, in which the Allmans appeared with the J. Geils Band, Albert King, Edgar Winter’s White Trash, Mountain, The Beach Boys and Country Joe McDonald, closed out the Fillmore East in a show broadcast by WNEW-FM. Performances from that show appeared on the albums At Fillmore East and Eat a Peach. 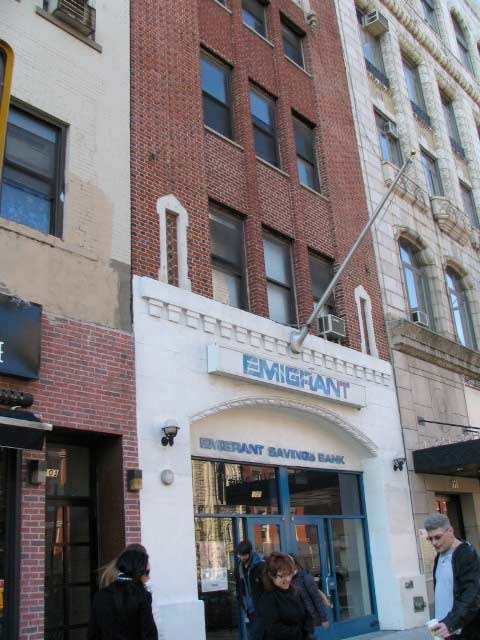 After Graham closed Fillmore East, the building became home to The Saint, a private gay club. Today there are no reminders at all of when this was a concert venue: Emigrant Savings Bank now occupies the Fillmore’s old space.

More on the Fillmore: 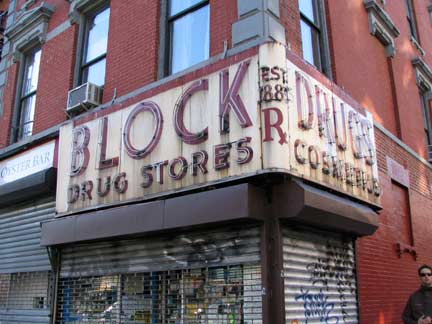 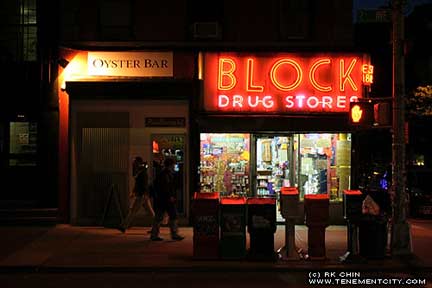 Like the amazing neon sign says, Block Drug Stores (the plural implies there was once more than one) has been in business since 1885. From the looks of things I’d guess the sign has been there since the 1935-1945 period, and it still lights up. Night photo: “lucky dog” 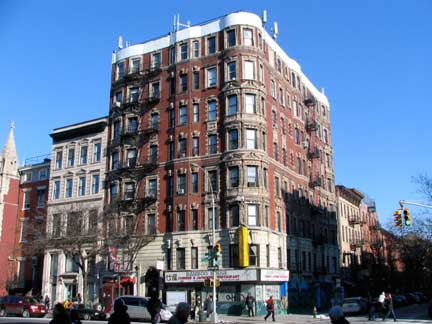 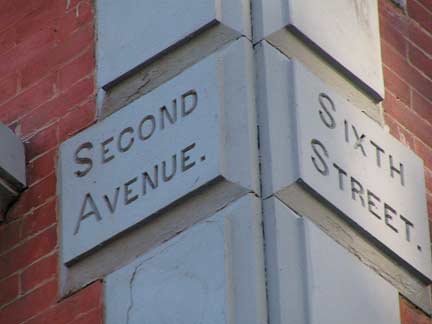 A BEAUTIFUL ARTISTIC JOB THAT MUST BE PRESERVED AS PART OF ROCK’N ROLL HISTORY.

Great memories another hot spot i like is Dutch Schultz old hide out the Gelston House East Haddam, CT.

I remember when the Fillmore East was a movie theater – The Lowes Commodore. I recall seeing the original Time Machine there.

I saw lots of great shows at the Fillmore East the Jeff Beck Group, Terry Reid, Taj Mahal, Etc from 1968 to 1971 There will never be another musical venue as great as the Fillmore,Sadly the past does not mean a thing to some people and even more sadly Money trumps all things no matter how great they were or are. The building was gutted and another great piece of history is lost, all in the name of lousy money. What is really ironic is the Fillmore East was not about money It was about talented bands and A very creative staff the sound crew and Light show, this was groundbreaking stuff nobody was doing this. the love of money steamrolled it into the ground. At least they cant take away the memories

Finally, there will be a landmark designation for Fillmore East that will happen on October 29, 2014.

“The Church of Rock and Roll” to be memorialized by Greenwich Village Society for Historic Preservation on October 29, 2014

NEW YORK, NY – October 17, 2014 – Apple Bank for Savings, in conjunction with the Greenwich Village Society for Historic Preservation and Two Boots Pizza, will be hosting a landmark plaque unveiling honoring Fillmore East, the iconic concert hall formerly located at 105 Second Avenue in the East Village, on October 29, 2014 at 5:00 pm. The Greenwich Village Society for Historic Preservation will be unveiling a plaque dedicated to what had been the home of “the church of rock and roll” from 1968 to 1971 and where the greatest rock musicians from Jimi Hendrix to Janis Joplin to the Grateful Dead had performed.

Originally built as a Yiddish Theater in the mid-1920s along a section of Second Avenue known as the “Yiddish Theater District,” 105 Second Avenue was later turned into a movie theater. In 1967, rock promoter Bill Graham, who also owned the Fillmore West in San Francisco, took over the theater and opened its doors on March 8, 1968 as the Fillmore East. This deceptively small-looking building from the outside actually seated 2,700, and soon became the most sought after venue for the best rock groups in the country.

In its three-year-plus span, Fillmore East hosted two-show, triple-bill concerts several nights a week. Performing artists included The Who, Jimi Hendrix, Janis Joplin, the Grateful Dead, Frank Zappa, Miles Davis, Joe Cocker, The Doors and many other great rock, folk and blues musicians of that era. Fillmore East closed in 1971 and performing at the last concert were the Allman Brothers, The J. Geils Band, Albert King and The Beach Boys.

Apple Bank, established in 1863, provides consumer and small business banking services in greater New York through its branch network and online banking service. Apple is the second-largest state chartered savings bank in New York State, with close to $12 billion in assets and 76 branches located in the five boroughs of New York City, Long Island and Westchester. Visit us at http://www.applebank.com

Thanks for any info.

Don’t forget Dutch Schult’s old hang-outs speak easy’s like the Gelston House East Haddam, CT the Poli Bridgeport CT Coindre Hall Llyods Harbor LI or the Glenmere Chester New York. Still looking for his lost loot of 1000 dolla bills. Lot of books have been written on the Gelston House and how Schultz ran booze from Canada down the Con river to the gelston House then a speak easy // brothel into Manhattan via the Bronx.

Correction: Fillmore East did not contain “more than 3,600 seats”; the seating capacity was 2,654. I managed the hall in its subsequent incarnation as VillagEast, which you have failed to note.

So many great musical acts: CSNY, Crazy World of Arthur Brown, Jefferson Airplane…between concerts there and my job at the Electric Circus, I was quite at home on the Lower East Side. Wonder who’s still alive from those days?

I enjoy winter snow as much as the next person, but on the occasion where my one ticket would allow me my first opportunity to experience the wonder of The Fillmore East, and my first concert experience seeing Jimi Hendrix and The Band of Gypies at The Fillmore East, I didn’t appreciate the heavy snow fall and ice the quickly closed down Route 1-9 into NYC. I was determined to go but my parents refused to let me leave to home. I didn’t have a driver’s license; I was a high school sophmore.
That New Years Eve concert, Dec. 1 1970, that would later become a live concert album.
Years later, I, and several friends, attended the closing concert series of the Fillmore East, and Fillmore West Auditorium in San Francisco. Frank Zappa and The Mothers of Invention headlined the show at The Fillmore East. Coincidentally, that show would later be produced as a live album, The Mothers. Great Show; tickets were $3.50 a ticket.
There will never be another Fillmore East.

I lived at 22 St. Marks, 54 East 4th and an address on East 11th I finally was able to forget. I probably saw 60 or 70 concerts at The Fillmore between 1967 and 1970, from the first Who tour of “Tommy” to Hendrix’s Band of Gypsy’s tour to The Jefferson Airplane and Buddy Guy two consecutive Thanksgiving weeks to Iron Butterfly, Quicksilver Messenger Service/The McCoys, Derek and the Dominoes, Ike and Tina Turner with Fats Domino, Traffic, the Grateful Dead (just after Woodstock), Lonnie Mack with Crosby Stills and Nash, three of the Super Session gigs, Paul Butterfield’s Blues band and on and on..one of my favorite memories was that the Fillmore Men;s room was where you went to get high, male or female.