Both the MTA and the weathermen blew it on Saturday, April 5th, 2008–the MTA because it usually does, cancelling LIRR trains for trackwork from Shea Stadium to Woodside, and the weathermen, by forecasting rain and drizzle. The sun shone all day long, and there was your webmaster confined to Queens. And found… 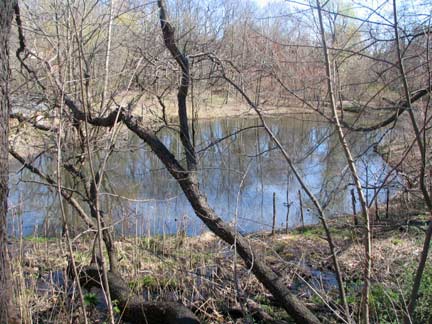 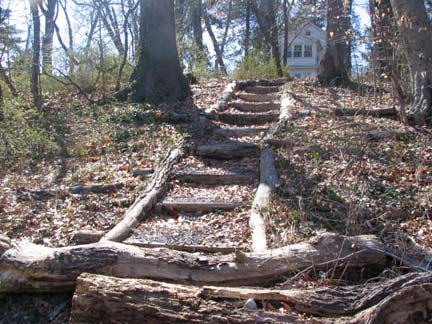 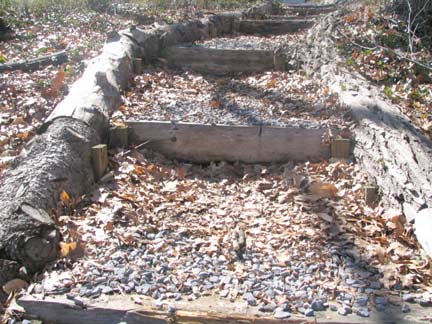 …a new set of steps at Aurora Pond, the small lake in Udalls Cove Park, accessible from near the LIRR tracks via Sandhill Road.

The path is held in place with tree trunks and cut pieces and sprinkled with wood chips. It’s pretty steep in areas–you really have to pick up your feet to ascend it. It links the back end of Aurora Pond with… 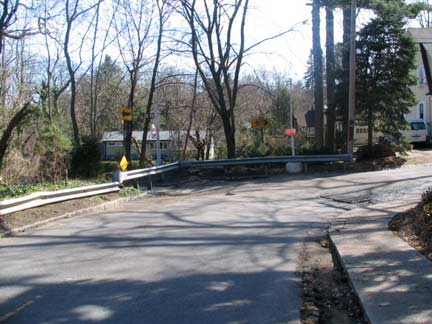 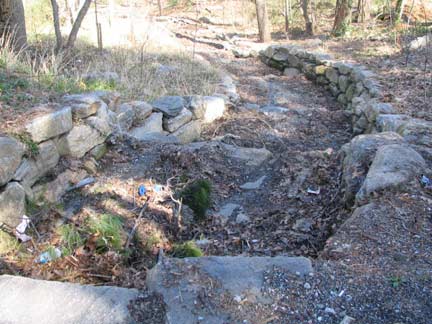 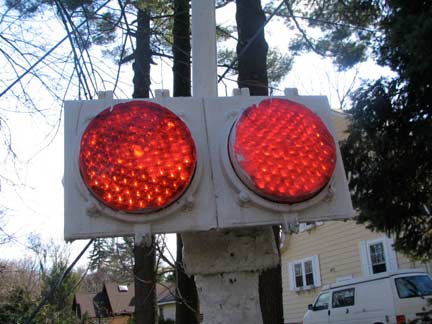 …Douglas Road, near the bend where it becomes 38th Road.

If you look to the left at the bend, you can see how far the old stairway into Udalls Cove Park had deteriorated.

Speeders are dissuaded from crashing into the guardrail by this pair of red warning lights at the bend.

We have now arrived in the next neighborhood west of Little Neck, Douglaston. (There is a Forgotten Fan named Doug Douglass, but he does not live in Douglaston.) 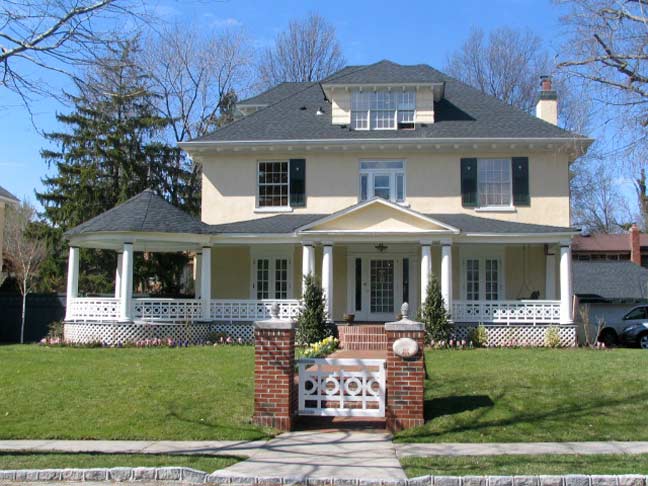 Beginning here, a selection of incredible homes that I will never afford, and in fact, I have no idea how anyone can. (I know, some people say the very fact that I cannot imagine owning such homes is the primary explanation about why I cannot own one.) Anyway I will forever vicariously have to experience sitting on the gazebo drinking Corona on June afternoons here. Or vicariously imagine hanging out up in the alcove blogging. This one is on 38th Road near Hillcrest. 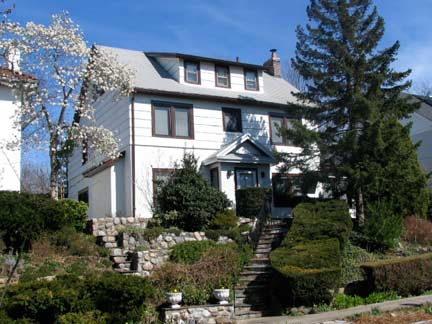 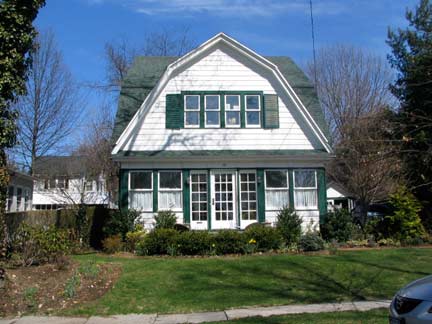 A pair on Hillcrest. I was attracted especially by the multi-paned doors on the house at the bottom. 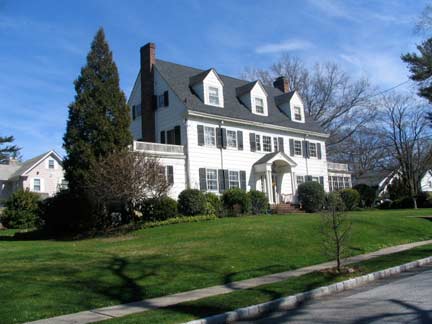 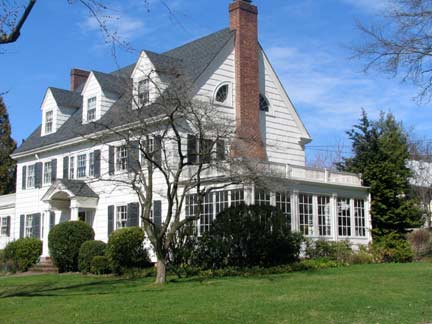 Amazing home at Hillcrest Avenue and 39th Avenue. Showing it twice so you can savor the huge lawn and even better, the enclosed porch on the 39th Avenue side. 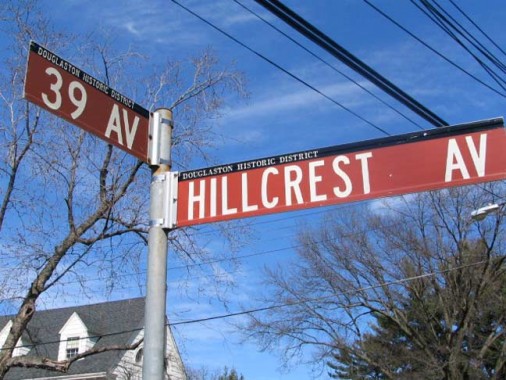 Douglaston has recently become a NYC Historic District and has a new batch of maroon street signs with a black band at the top. But how do these two signs differ? 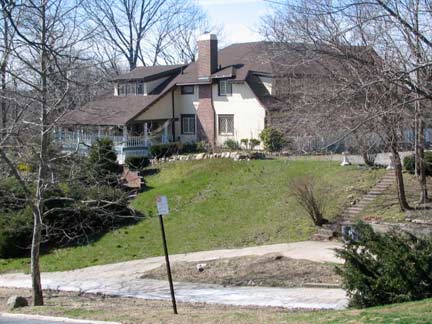 Yet another home beyond my capacity for wonder. It is built on the steep hill that runs through Douglaston from north to south just east of Douglaston Parkway and the wraparound porch commands views of the west and south. 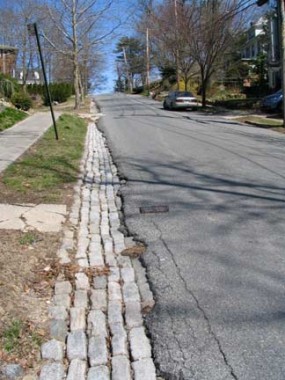 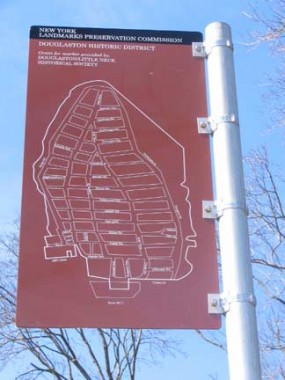 A look at the Belgian block gutter on 39th Avenue (some streets in Douglaston have above-ground pipes here as well) and the Historic District map. This one is in the traditional Century typefont. 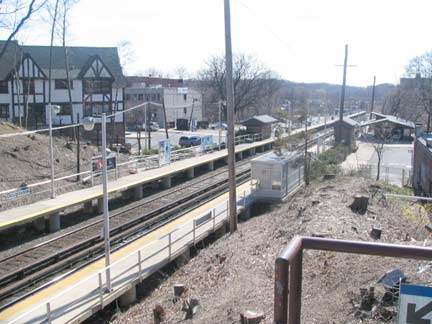 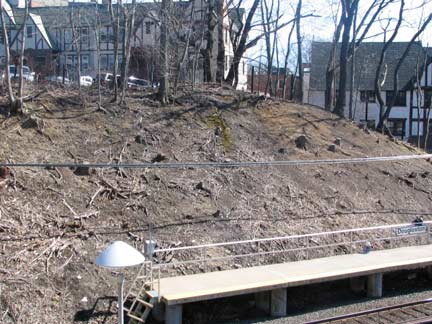 Douglaston RR station, Douglaston Pkway and 235th Street. The station used to have a canopy of trees, but all LIRR stations on the Port Washington line were denuded of trees by the LIRR in the summer and fall of 2007, the LIRR citing safety concerns, ie. leaves making tracks slippery.

Thus, while the city announed plans to plant 1 million trees by 2030, NYC and its agencies have been hellbent on cutting many of them down. 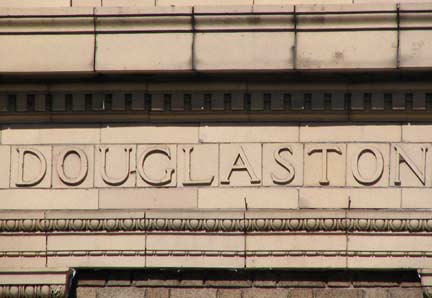 I covered the Douglaston National Bank, Douglaston Pkway north of Northern Boulevard, in September 2007, but I cannot resist photographing it every time I pass by. This majestic view of Zion Episcopal Church is available from Northern Blvd. east of Douglaston Parkway. I covered the church on ForgottenTour 31 in August 2007. 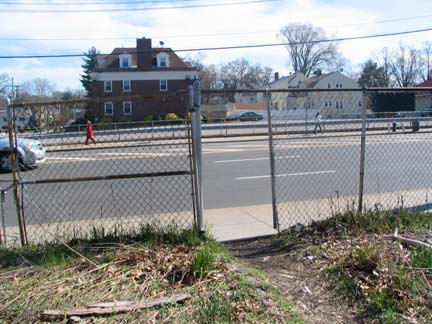 There’s a short path into Udalls Cove Park available from a break in a chain link fence on Northern Blvd. and 245th Street. The path is nothing special but it does grant a look at Gabler’s Creek, which runs through a ravine on the Douglaston-Little Neck border.

Several trees are carved like this (left)…are they going to get cut down as well?

Forgotten Fan Christopher Camastro: Girdling is a forestry practice to kill a tree, in this case to stop their spread into the meadow. That species is a black locust, I can tell by the bark, which is quite invasive. Dead trees left in grassy area provide prime nesting habitat for cavity seeking birds and mammals. I am assuming that was why that tree was girdled, they also used black locust for that path by Aurora Pond because it is hard as a rock and decays slowly. 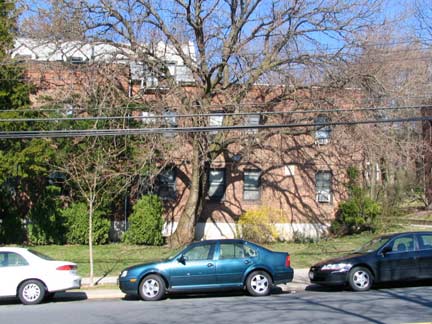 LAST ROUNDUP at the CHEYENNE DINER

WALKING THE WILLIAM B.

Douglaston Manor… my childhood home & neighborhood… a great place to grow up in the 1950’s & 1960’s. We didn’t lock the doors, except to go on vacation. That “Belgian block gutter” was called cobblestone, by the locals. Whole streets were made of cobblestone, until they were covered over with asphalt. At one time Douglaston Pkwy between Pine St. & 40th St. was called Cobblestone Road… That got paved over some time after 1964 along with Hillside Ave. In 1966, when I was 13, I worked at the Delicatessen that is to the left of the Douglaston Bank. The bank was never rented out in the 1950’s or 60’s… no idea why, it seemed like a waste of good retail space. I was inside it one time when two guys were cleaning it to rent it out but nothing ever came to fruition. Udall’s Cove Park was called The Swamp because it would often flood. Built many tree forts & rope swings there. If you head north across Sandhill Rd. eventually The Swamp turns into a wonderful salt marsh & then becomes Littleneck Bay… where I learned to sail several types of wooden boats. I lived on Manor Rd. across from the tennis courts of The Douglaston Club where John McEnroe had his first tennis tantrums. When my father retired in 1969 & sold our house, I remember him saying he got over $100,000 for it. I heard it would sell for several million, today. It was a great place & era to be a kid.