Who was “Great Scott,” anyway? Which Scott was it? Most pundits have come to the conclusion that it was none other than General Winfield Scott of the Mexican and Civil Wars, and it so happens that there’s an old neighborhood in Queens. part of Woodside, named for him.

The phrase “Great Scott” was commonly found in superherocomic books, including Superman. Dr. Watson habitually used the expression in the Rathbone-Bruce Sherlock Holmes Films made between 1939 and 1946. The exclamation can also be found in C.S. Lewis’ The Chronicles of Narnia, such as by Digory in the book The Magician’s Nephew, or by Peter in the book The Lion, the Witch and the Wardrobe. One of the better-known contemporary uses was as the catchphrase of Doctor Emmett Brown in the Back to the Future film trilogy. wikipedia
By the mid-80s, Supes was saying things like “By Rao!” (the Kryptonian sun god) to make him more conscious of his roots, I suppose.

Brooklyn’s Scott Avenue, located in far eastern Williamsburg and Greenpoint, like its brother avenues Gardner, Varick and Porter, is amidst a heavily industrial-manufacturing area.

Scott, and its parallel avenues, are divided into two distinct sections, interrupted in the middle by a massive Keyspan gas plant. All the streets in this area show up on maps by 1855, though at one time, they ran continuously from the Brooklyn and Newtown Turnpike (Flushing Avenue) north to about Newtown Creek. Scott is alone among its fellows by running a bit south of Flushing Avenue to St. Nicholas Avenue and Troutman Street. 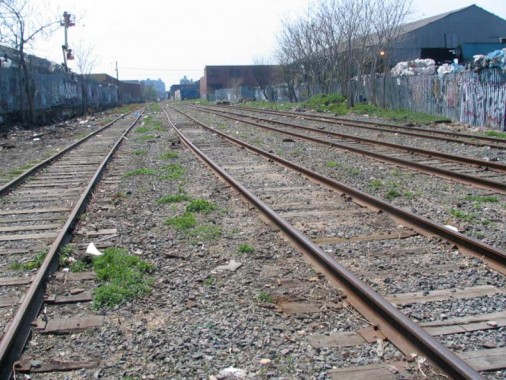 On a recent jaunt in Ridgewood I revisted Scott Avenue and the old Bushwick branch of the Long Island Rail Road. It’s rare to find any at-grade trackways in NYC; the Bushwick branch provides some great photo-ops of trackways, and during the week when slow-moving freights run here as well. All trains using the line employ diesel power; they are open like this because they aren’t electrified. 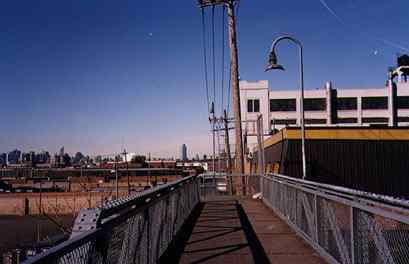 I came back to Scott Avenue because I wanted to see if the old metal footbridge that crossed the LIRR here still had a cluster of the”crescent moon” luminaires it was sporting back on March 18, 1999, when I snapped the shot on the left. They had long lost their incandescent bulbs by then.

Our supply of “crescents” has been diminishing since I started FNY the same year, and I wanted to get a better picture of them, since I’ve been through 2 cameras since then and I wanted better shots. 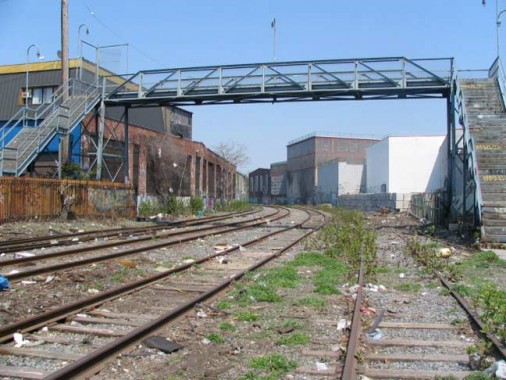 The good news is that the 4-track Bushwick branch is unchanged, if just a bit more garbage-strewn, and our rusty bridge is still holding firm. 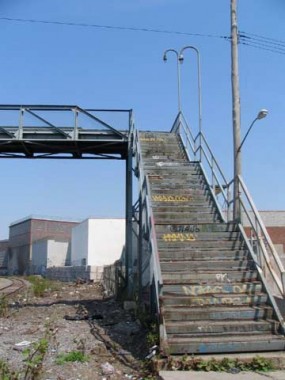 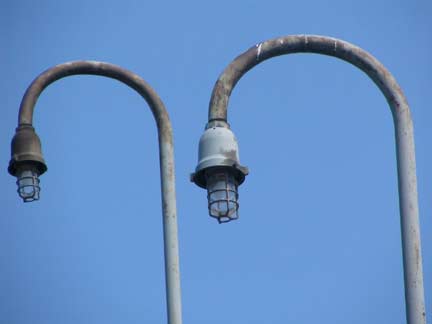 The “bad” news, at least for Crescent fans, is that the city…or someone… has actually re-illuminated the lamps, removing the luminaires and installing glass-protected bulbs. I wonder if these are bright yellow “sodes” or dim incandescents? In either case, I’m not about to stroll Scott Avenue in the dark to find out — perhaps if I’m in a car around here after dark one day I can arrange a detour over here and find out. In any case, the lamps are unique…nothing else in the city like them on public territory, at least. 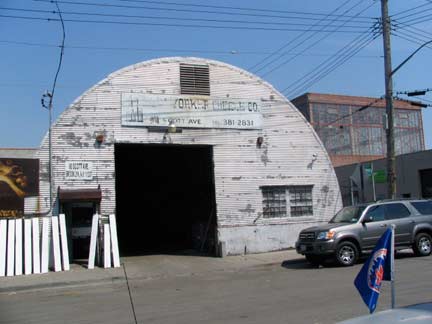 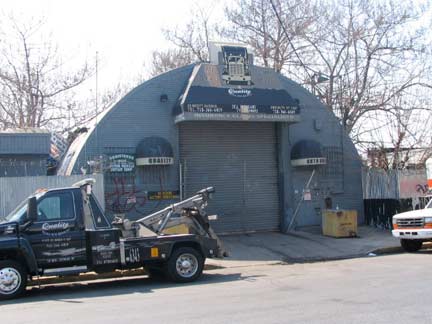 One Scott Avenue aspect I hadn’t noticed on my first visit, however, was its pair of Quonset huts, one housing the New Yorker Cheese Company, and the other, one of the area’s myriad auto repair shops. The Quonset hut by definition is a lightweight structure made of corrugated steel built with a semicircular cross section. It was developed during WWII at Quonset Point, in a naval construction area near Kings Point, Rhode Island; it is actually a variant of the Nissen Hut first used during World War I. Perhaps I hadn’t been paying attention but I don’t remember seeing any before this pair, at Scott avenue and Randolph Street.

OCEAN. Slices of an overlooked avenue