BOLTS. The Tin Woodsman of Woodside

For such a huge city, NYC is short on roadside oddities. You know, like the World’s Biggest Lightbulb in Menlo Park NJ, or the Big Duck of Flanders, NY in Suffolk County, or the Paul Bunyan Muffler Man of Elmsford in Westchester County.

Sure, we’ve got that statue of Vladimir Lenin on the rooftop at East Houston and Avenue A, along with the clock with the numbers all in the wrong spot, or even Dave Herman’s formidableCity Reliquary (which has evolved more toward a pure museum, actually). A couple of years ago I found a huge cowboy hat hanging outside a place on Coney Island Avenue; I’ll have to go back and get the exact spot. 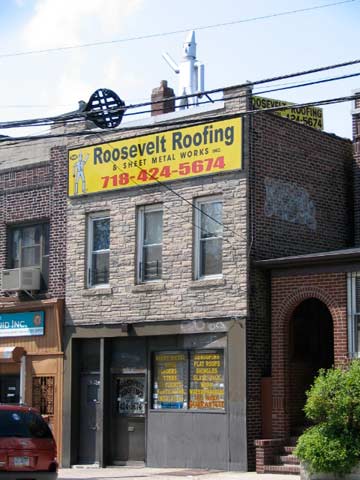 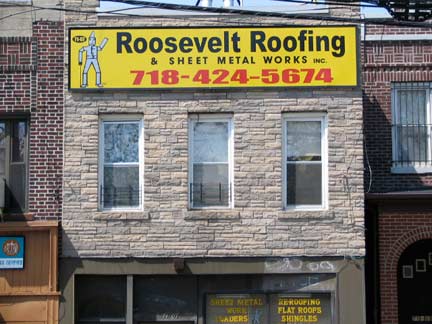 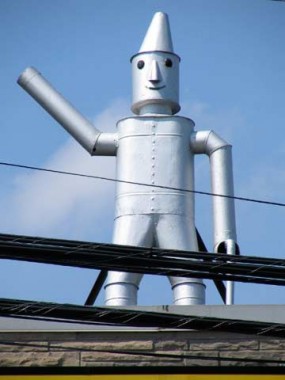 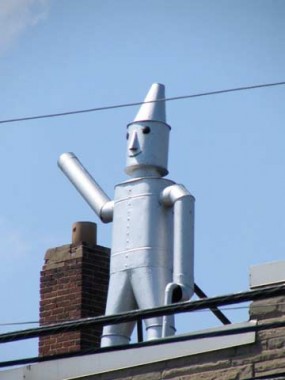 What flatters him better? Full frontal or profile? 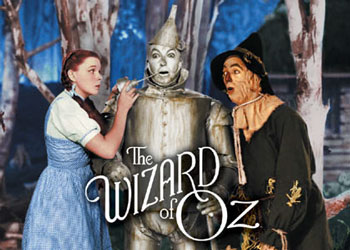 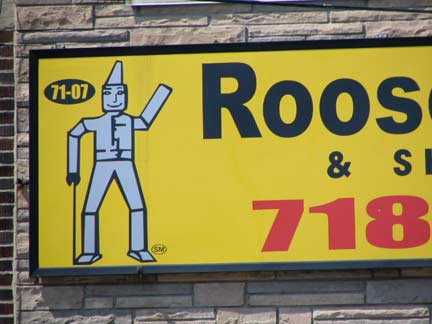 Arthur Machen, the great Welsh fantasist, once made the point that if everyday objects or pets suddenly started speaking to us, and behaving in a human fashion, we wouldn’t consider it very charming or amusing. We’d freak out – some of us would go mad.

And it’s just as well there aren’t superior races on other planets attempting to contact us or send flying saucers to observe us. What has happened on earth every time a culture with superior technology encountered one that came up short? A massacre, that’s what.

It’s late and the sight of a robot on a sheet metal factory has caused these spasms to leach out. Better get to bed.

[Roosevelt Roofing since moved to 69th Street and the Tinman’s whereabouts are unknown.]

I have the tin man. He is safe in our yard at Roosevelt Roofing’s Maspeth location. I am trying to work with the current building owner on 55st and Roosevelt ave to have the Tin man returned to the rooftop where he can be seen from the 7 train again.

Good news! Unfortunately in my new book I say I can’t verify his current location 🙁

Tell the Tin Man hello from Puttie! I used to see him and wave to him coming and going from work on the #7 train in the early 70s! I never forgot him. A Queens landmark for me for sure. Take good care of Bolt and know this old lady remembers him fondly.