What you see here is Bay Ridge’s main drag…for most of the 19th Century, that is. Stewart Avenue (it likely takes that name from a landowner along its route) once ran straight up the spine of what was then the western edge of the town of New Utrecht.

What would become Bay Ridge was first spotted by Europeans in 1524, when Giovanni da Verrazzano sailed up the Narrows; it was then controlled by the Lenape Indians. The Dutch didn’t settle the area for another 70 years, and it was a far-flung area vis-a-vis Manhattan until the subway linked it to the island borough in 1915. It was a colonial stronghold of the British, who landed there in 1776 on their way to a victorious Battle of Brooklyn.

Bay Ridge’s fortunes increased when the US Government constructed two Long Island forts facing the Narrows begining in 1825; Robert E. Lee and Stonewall Jackson both served at Fort Hamilton as young officers in the 1840s. The newly dubbed Bay Ridge (renamed from Yellow Hook after an early-1850s yellow fever epidemic) began to attract wealthy landowners for its fine views of the Narrows and Upper New York Bay, and they built a series of mansions along Shore Road. Few remain today, but Bay Ridge remains a bastion of the well-off, who maintain palace-like dwellings in the side streets and avenues near the water. One of them is the one-of-a-kind “Gingerbread House” at Narrows Avenue and 83rd Street. 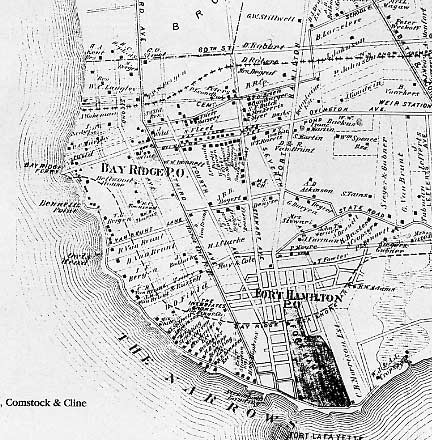 No readily available historical text or online source, though, is much help in digging out information about mysterious Stewart Avenue, which, as we see from the 1874 Beers Atlas plate (via Merlis’ Brooklyn: The Way It Was) was the main north-south route in Bay Ridge in that era.

To your webmaster, the map shows a fascinating vision of a Bay Ridge in transition. Still dominated by farm lanes and cow paths, we see that 3rd Avenue (with a horsecar route) and 4th Avenues had been laid out, while 60th Street, Ovington Avenue, Fort Hamilton Avenue (now Parkway) and 86th Street were already on the map. The proto-79th Street, Van Brunt Lane, is on the map. And right in the middle of things is Stewart Avenue.

The de-emphasis of Stewart Avenue (by the time we get to 1916, it had mostly been wiped out of official existence except for the brief section we’ll see on this page) has to do with the new streets that were then on the planning boards and would be largely built by the 1900s. In the map above, note that the new 3rd and 4th Avenues, as well as 7th, then just a twinkle in urban planners’ noggins, ran northwest athwart Stewart Avenue (in Bay Ridge, the avenues run just to the east of true north).

When those main avenues were built, therefore, Stewart Avenue became cut off from the overall grid.

The map at left, a section of the overall Beers 1874 New Utrecht map, shows a gaggle of little streets at the bottom, part of the separate neighborhood of Fort Hamilton. It has largely been absorbed into Bay Ridge, though some bungalow-style homes down there remind you that it was built on somewhat marshier ground than the rest of the neighborhood.

The dotted line marks the route of the never-built Bay Ridge and Sea Shore Railroad, which was to run along Brooklyn’s south shore to a terminal at the Bay Ridge ferry to Staten Island, which was at the foot of Bay Ridge Avenue for decades until it was forever closed the day aftrer the Verrazano-Narrows Bridge opened on November 21, 1964. The railroad was to run along 86th Street through what is now Dyker Beach Golf Course.

On this page I’ll recollect the Stewart Avenue I’ve seen from my years in Bay Ridge. 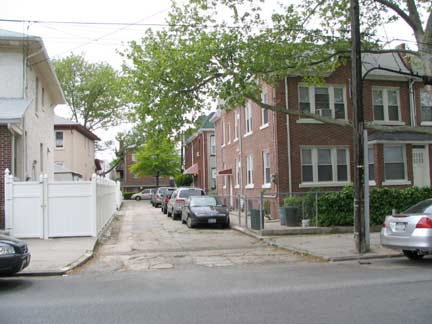 Stewart Avenue from the south side of Ovington Avenue, just west of the Gowanus Expressway 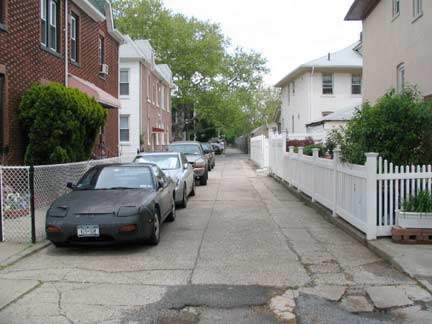 Stewart Avenue from the north side of 71st Street 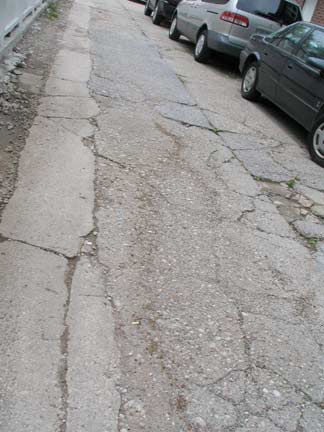 I first became aware of Stewart Avenue as a boy from perusing a 1970s edition of the Geographia “Little Red Book” Street Guide to Brooklyn, which lists all of Brooklyn’s streets with their cross streets, bus lines, subways, etc.

But nowhere in the guide did it list Stewart Avenue in Bay Ridge — just the one on the other side of town, on the Bushwick-Williamsburg border which I call East Williamsburg.

It seems the cross-street listing of Stewart Avenue was something of an error on the part of Geographia; they had stopped listing it as a Brooklyn street (I have editions prior to 1969 that do) because the city had demapped it.

But just because a street is demapped doesn’t mean it isn’t there. This portion, between Ovington and 71st, is now used as a private driveway, but it’s still paved, unlike the section we’ll see later.

Any trace of Stewart Avenue north of Ovington must have disappeared when they dug the Gowanus trench there. 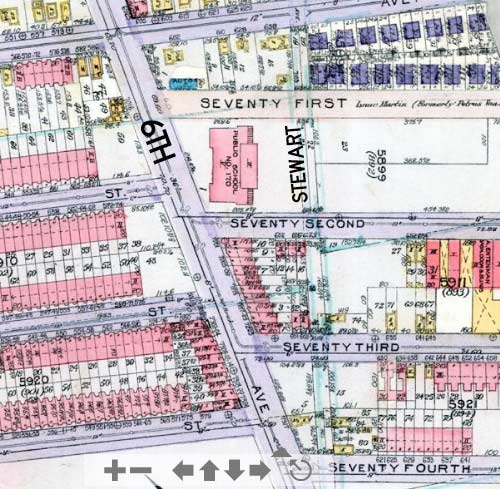 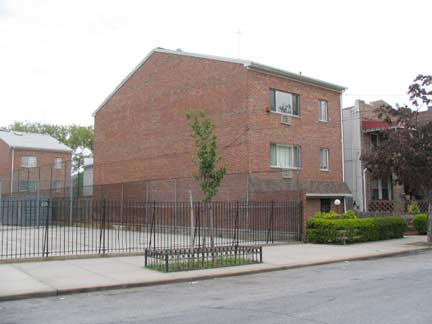 Top: section of 1916 Belcher-Hyde Brooklyn atlas. I’ve marked 6th Avenue and Stewart Avenue. Note the section directly in back of PS 170, between 71st and 72nd Streets. When I was a kid, pretty much till 1982 or so, Stewart Avenue ran continuously here along the back of the schoolyard. In ’82, two buildings (below) were constructed. Notice no windows facing the yard! 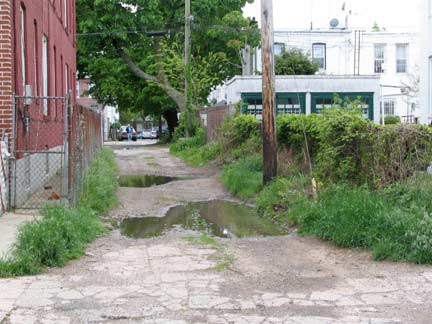 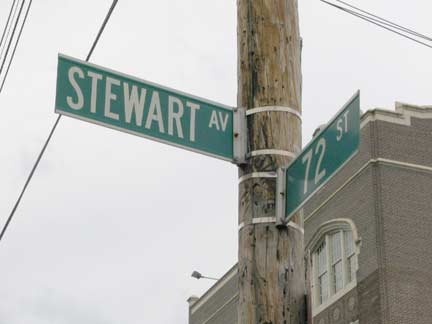 In the mid-1980s the Department of Transportation installed street signs on Stewart Avenue between 72nd and 74th. The street had never before had NYC street signs, and it still has never been lit by streetlamps. 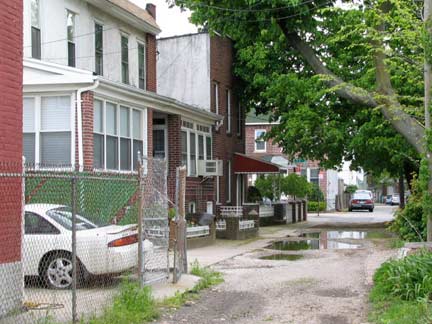 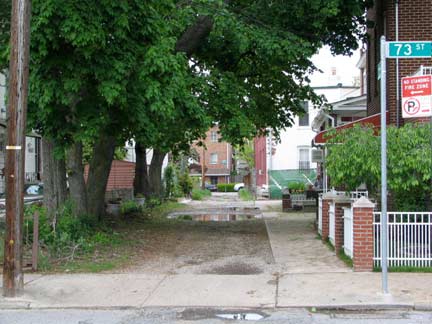 The block between 72nd and 73rd Streets contains one two-family house fronting it. That’s where the little yellow square on the map comes in: that’s the house. This particular block is a dirt road that shows evidence of being paved long…long…ago; perhaps not since the map was drawn in 1916.

Stewart Avenue is a fascinating study of deferred maintenance on a “living fossil.” 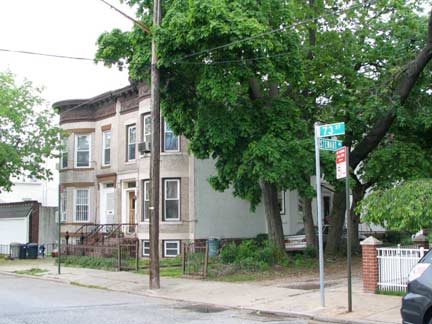 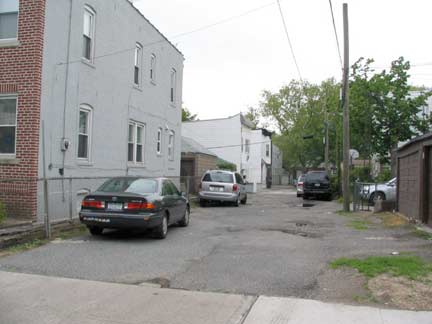 From November 1982 to October 1990 73rd Street between 6th and 7th was my block; I lived on the 3rd floor at 654, a yellow-brick walkup. Despite the temperature in the apartment dropping to 60 on some cold winter nights because of poor insulation, it remains my favorite apartment to date; I could see the Verrazano Bridge and McKinley Park from the same room. I also loved living on the same block as the vestigial Stewart Avenue.

The things you remember. See that utility pole in the picture above left? There was a big chestnut tree behind it. And, there was a very old one-way sign hanging limp on the pole by one or two screws. It was a very old one…one of the white arrow-shaped ones. This was long before the Forgotten NY era, and I never got a photo of it. 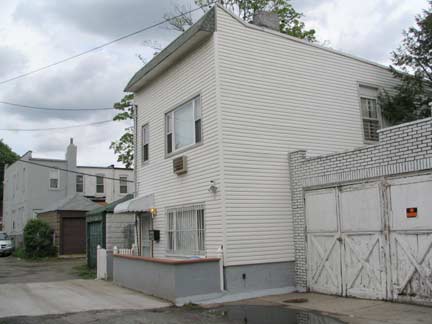 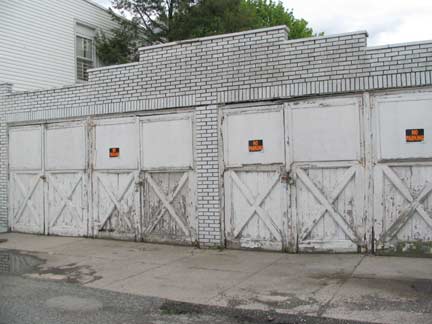 Between 73rd and 74th Stewart Avenue also has a lone house which, because of the siding, looks newer than 1916, but it’s been here at least that long. Check the very old garages next door, that serve both this house and the one on the corner of 74th Street. 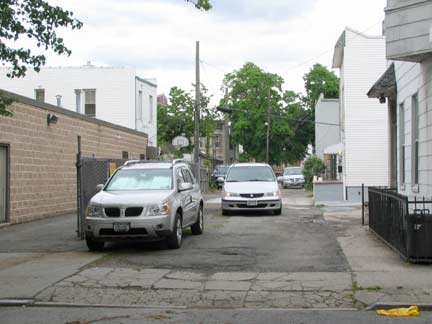 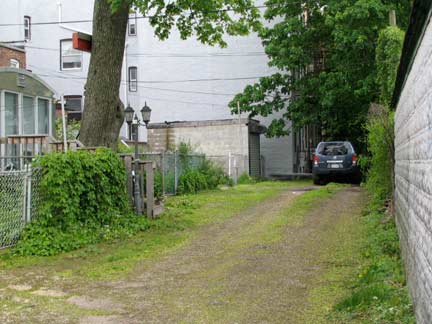 Above, Stewart Avenue looking north from 74th Street. Below, between 73rd and 74th Stewart Avenue begets an unnamed alley of its own, this one serving the backyards of the dwellings on the south side of 73rd Street. 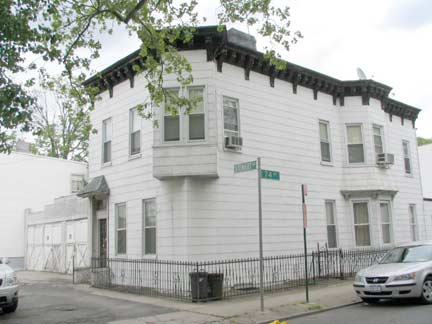 The owner of this old house on 74th and Stewart would constantly remind me that it was a private lane and I shouldn’t be there, and if you saw me in those days, you would probably shoo me away as well. However, as a monkey is attracted to shiny things, I was drawn to a very old porcelain sign that said “Stewart Avenue” on the side of the building. One day, it was no longer there, and I asked the owner what became of it, but he didn’t know. Pity.

We can thank the three homes discussed here, though, for the continued existence of Stewart Avenue. Till a developer purchases the whole shebang for a flock of Fedders, we’ll have an aboriginal Bay Ridge lane in our midst.

Just found this site. I grew up in the house on the corner of Stewart and 74th with all the garages. Have many fond memories. In those days, Stewart Ave was not on any maps. No one could ever find our house (except the mailman). A UPS delivery was always hit and miss. Moved to Colorado in 1976. Best to all still there.
Guy

I remember the “alley” led to a narrow stone steps across the street from Leif Ericson Park. I also recall–or think I do–a stepped pathway through the backyards of the houses between 67th and 68th Streets between Stewart and Seventh Avenue. These homes would have been lost in Verrazano Bridge-Gowanus Expressway defacement of Bay Ridge–yeah, I’m still angry. Cannot find any maps to confirm the recollection.

Anyone out there confirm this or is my old mind playing tricks?

In doing my “remembrances” from growing up Bay Ridge Brooklyn for my grandchildren I wanted to know if there was any info on Stewart Avenue (Lane, we called it). I lived in the apartments on the corner of Stewart Lane and 69th St. I walked to school, same PS 170, on Stewart Lane. I used to roller skate on 68th St. I remember well the alley you talk about, as you walked from 69th St. to 68th St. you would pass a large white house on your right. My best friend lived there. She said it was an original farm house and as you continued walking across 68th St. up a slight hill you noticed a house shaped like a barn on your left. They you encountered the narrow steps that took you to the large grass park. I confirm that you mind is sound. I wanted to cry when I learned they were going to erase my childhood for a bridge. I was angry too as were, I am sure, a lot of people who grew up there. I am sure we shared a lot of the same memories. Write them down for your descendants, they need to know who we were. Its been a long time since you posted this, like 6 years, but If you are still alive and kicking, send me an email.

You are right on the money. I lived on 67th street between 6 and 7 Ave. and used to cut through Stewart Lane on my way to 170. My Mother would have a fit if she found out. I hadn’t thought of that place in a long time. Ahh, great memories! I’m sooo glad there are some of us still around that remember that street.

Great article. The Bear and I lived below you. It was a great apt., despite, Helen’s constant nonsense. I hope all is well. Regards, Rod Lennon

I lived on the corner of 67th Street and 7th Avenue, right across the street was Leif Erickson Park. I would cut through Stewart Lane to go to school at PS 170. My grandparents owned the old farm house on the corner of 67th street and we lived there for awhile and moved next door in a brick house on the corner. There was a pretty White House when you went up a couple of stone steps to Stewart Lane and they had a dog, a German Shepherd named Lupo. It was very quaint on that lane. We had to move because of the bridge and I have often wondered where the cutoff was in 67th street.

Per the link to the 1852 map of Brooklyn and Queens, the name of the street is actually Steward Avenue, with a “d” at the end.

I think that’s an error.