In the summer I occasionally have to shake off torpidity — the combination of overcast skies and muggy weather make it hard for me to get started. Bearing in mind that this is pretty much what you get most of the summer in NYC — with the alternative being horrendous heatwaves — I have to take advantage of whatever time off I have and get out of Little Neck for a few hours.

That said, a welcome visit to Richmondtown, Staten Island seemed like the right idea on July 4th, 2008. I’m drawn to this area at almost the geographic center of the island for a variety of reasons. It does not possess the look of NYC’s other neighborhoods, with grid-patterned streets filled with detached homes, Fedders specials of rows of brownstones, but it also doesn’t look like so much of what Staten Island is becoming: Mallville, USA. This was the third July 4th visit I’ve made, and about the 10th overall.

Knowing the toll modernization was taking on the island, and perhaps presciently imagining the devastation to be wreaked on Staten Island’s old and out-of-the-way places by the opening of the Verrazano-Narrows Bridge, Historic Richmond Town was established in 1958 by the Staten Island Historical Society and the City of New York at the area surrounding the junction of Richmond, Richmond Hill, and Arthur Kill Roads. Colonial-era homes from all over the island were moved to this 25-acre site over the ensuing years, and the place has also acquired a culture all its own, with costumed guides, holiday happenings, and a studied 19th-Century atmosphere. This year, for example, July 4th activities included book readings, tableaux vivants (costumed performers re-enacting scenes from famed paintings), pie baking and ice cream making using 19th-Century implements.

Richmondtown’s buildings have been arranged along Richmond Road, Center Street, Court Place, and Arthur Kill and Richmond Hill Roads. The area is more properly called Richmond and is located at the foot of the ridge of high hills at the center of the island that include Ward’s, Grymes, Emerson, Todt and Lighthouse Hills. Richmond Creek, a thin stream here , becomes much wider as it enters the Fresh Kills Landfill several miles to the west. Near Richmondtown we find expansive LaTourette Park and Golf Course, the picturesque Staten Island Lighthouse, the Jacques Marchais Tibetan Museum, “Crimson Beech” (Frank Lloyd Wright’s only residential building in NYC) and the spooky ruin at Heyerdahl Hill. It’s not near the Staten Island Railway, but can be accessed via the S74 bus, Tottenville-bound, from the ferry terminal. Motorists can use the Staten Island Expressway, exiting at Slosson Avenue and then following Manor Road, Rockland Avenue, and Richmond Road to the village. 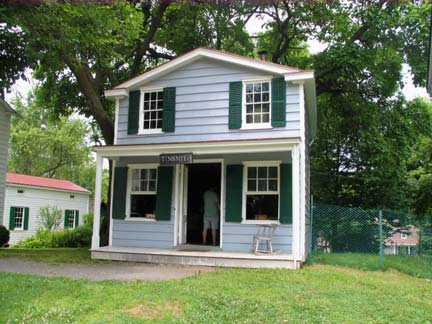 The village’s Tinsmith Shop was constructed in 1840 and operated as a grocery store by the Colon and Doetscius families in the Woodrow section (a few miles west of Richmondtown). On holidays, demonstrations in producing plates, cups and other items using tin are demonstrated. 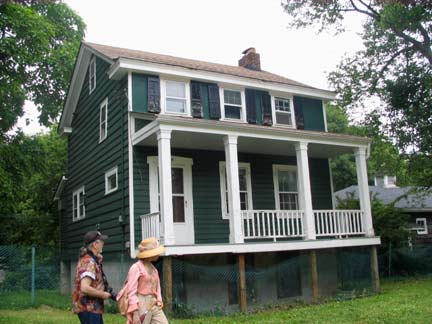 The Henry Seaman Cottage next door was built by entrepreneur Seaman in 1836 as part of a planned village in Richmond. The Panic of 1837, the USA’s first great depression, put his plans to an end. 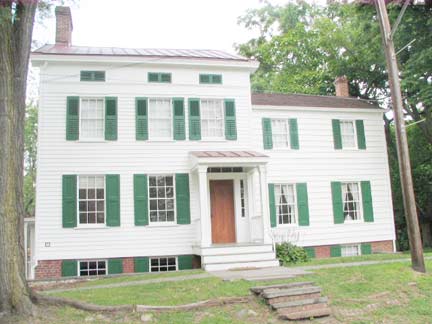 At the corner of Center Street and Court Place is the Stephens-Black House, constructed in stages from 1839-1853, has always been at this spot and was part of a wellspring of new houses near the Richmond County Courthouse (see below). It was the home of Stephen D. Stephens and family, the owners of the adjacent grocery on Court Place. 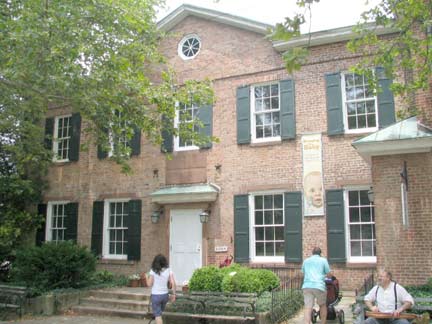 The Staten Island Historical Society Museum was opened in 1838 as the Richmond County Clerk’s and Surrogates’ Office. Today it hosts three floors of changing and permanent exhibits, including some very old and valuable maps. The clerk’s office was moved to the new govermnent center in St. George in 1920 and the building was converted to a museum in 1934. 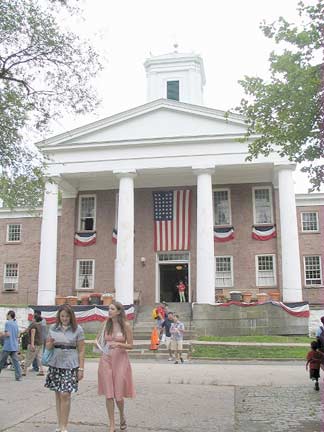 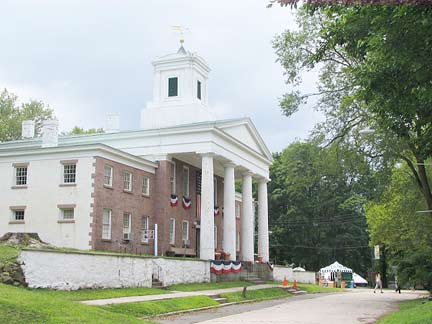 One of the most important historic buildings in Staten Island, the old Richmond County Courthouse was built in a Greek Revival style with four imposing Doric columns on its porch in 1837, the 3rd incarnation of the courthouse on the site. It was the main courthouse in the borough until 1919, when most countywide governmental buildings moved to St. George. It is currently the Museum’s visitor center and museum shop.

I was unaware of why the Museum was displaying the USA 33-star flag, in use from 1859-1861. Note the unusual arrangement of two rows of 7 stars, 1 row of 5, and two more of seven. In the 18th Century, flag makers had to get creative about how to arrange odd numbers of stars in the flag.

Fun fact. Staten Island’s Fingerboard Road is so named because the road once had a large finger-shaped sign pointing the direction to the county courthouse at Richmondtown.

There are some intriguing surprises rattling around in Richmondtown, including some artifacts I’m not able to explain fully. See what you think, and of course, if anyone has any ideas, I’d be glad to hear them. 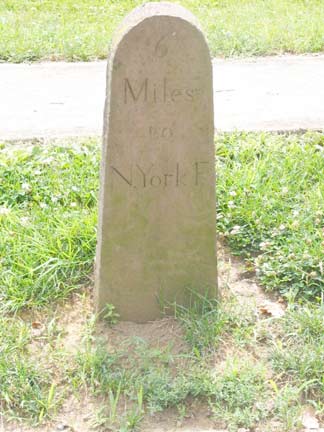 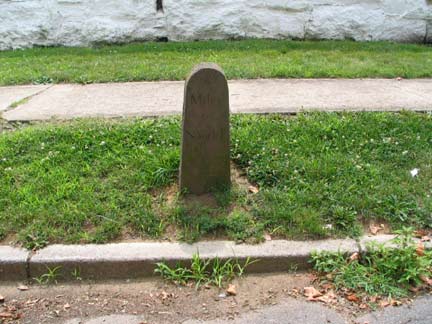 A milestone appears at the Center Street curbline in front of the Courthouse, with the chiseled words “6 Miles to New York Ferry”. I’m almost 100% sure it’s an original but I wonder if it’s in its original spot. (Logic would put it on Richmond Road, a block away, since that route has been in use since the colonial era.) 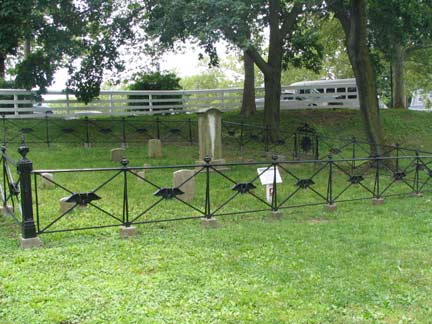 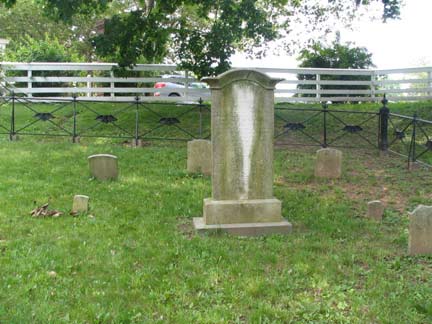 The Rezeau-Van Pelt Cemetery, west of the Courthouse, is one of dozens of small cemetery plots in Staten Island, some well-cared for, others abandoned. The two families whose members are buried here lived in the Voorlezer’s House (see below). 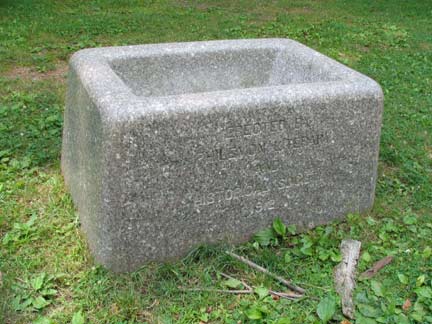 one of R-Town’s two horse troughs, this one dedicated by the Philemon Literary Historical Society (a long-ago Tottenville women’s association). 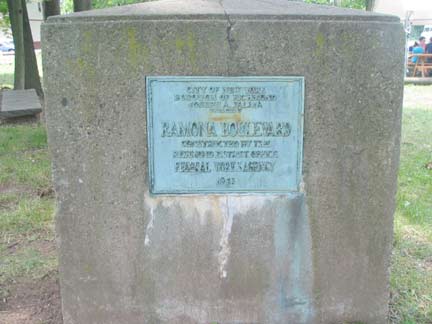 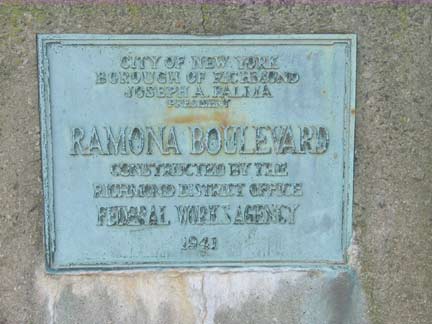 A concrete slab containing a plaque dated 1941 near the cemetery proclaims the existence of Ramona Boulevard, “constructed by the Richmond District Office, Federal Works Agency.” Of course no such route exists, though a Ramona Avenue runs through Arden Heights and Woodrow. Since the Veterans of Korean Wars Parkway (I wish they’d’ve stuck to the original easier name, Richmond Parkway) seems to assume some of Ramona Avenue’s route, I’d guess this is related to the genesis of the parkway, which, as Steve Anderson reports in NYC Roads, was planned as early as 1930 and its first incarnation, as a surface road named Drumgoole Boulevard, was built in the 1940s, with the present sunken parkway arrangement completed in 1972.