FNY doesn’t spend enough time in the Bronx — your webmaster freely admits guilt. With today’s Slice I’ll present a batch of photos I shot in High Bridge mostly in January 2005, a time when I was getting photographs for the ForgottenBook — I found that most of my previous pictures were unusable for print for one reason or another, and so I went around town with a film camera, since publisher HarperCollins wanted hard copies they could scan themselves.

High Bridge, named for the aqueduct bridge that spans the Harlem River, is a very hilly area in the southwest Bronx just northwest of Yankee Stadium. Google map: High Bridge 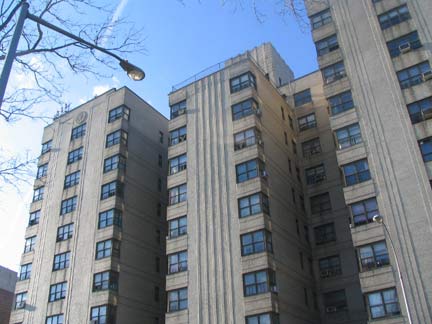 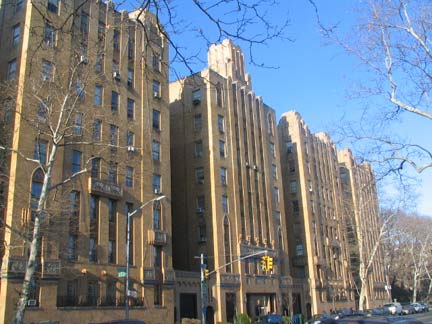 1001 (left) and 1005 Jerome Avenue are on the short stretch of Jerome Avenue not shrouded by the Lexington Avenue line (#4) which is carried over it by an el for most of its length. 1005, in particular, is a highly stylized Art Deco extravaganza with a multicolored terra cotta facade; look for figures that resemble, but not quite match, the High Bridge itself. 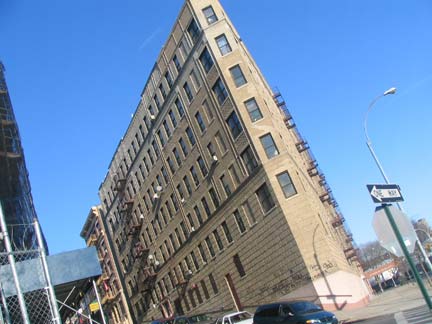 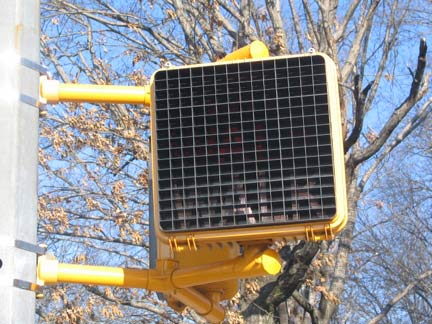 For fun, I shot the ‘flatiron’ shaped building at Jerome and Anderson Avenues at an angle. I wonder what the rooms on the corner with the single windows look like. Nearby, in 2005, I found a remaining ‘worded’ “walk/dont walk” sign, which has undoubtedly been replaced by the Hand and the Man since. 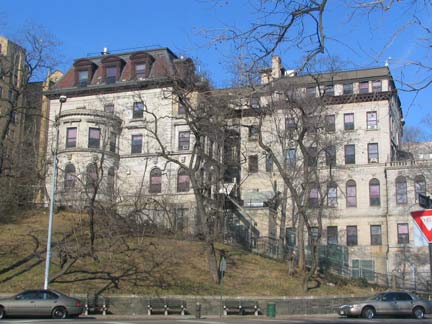 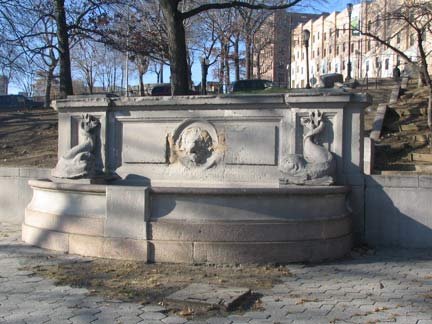 One of the most gorgeous unknown buildings in the Bronx is the High Bridge Woodycrest Center, a nursing home at Woodycrest and Jerome Avenues, built in 1902 originally for the American Female Guardian Society and Home for the Friendless (this page — it rambles a bit — gives a personal history of the place).

Fountain, Macombs Dam Park, named for the Harlem River dam built in 1813 by Robert Macomb. It was demolished in 1838 to make way for shipping. 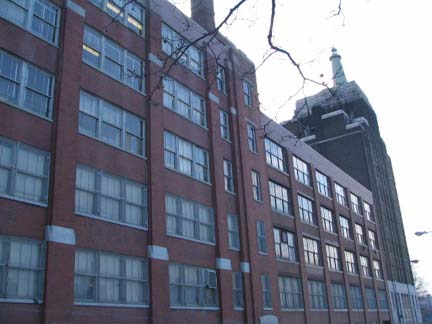 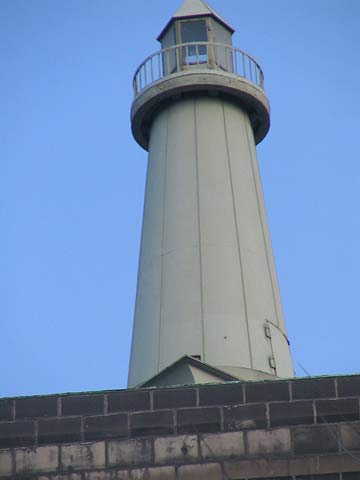 At the fork in the road where Sedgwick and M.L. King Blvd. (University Avenue) meet, a curious lighthouse-shaped structure comes into view. What is it?

The ‘lighthouse’ rests atop the H.W. Wilson Company headquarters. Wilson is a bibliography, general interest, and periodical index publisher that has been in bsuiness for over a century. The firm built its eight-story building with the lighthouse here in 1929. The lighthouse, shown perched on a book, is meant to symbolize “guidance to those seeking their way through the maze of books and periodicals, without which they would be lost.” At night, the structure is bottom-lit: in 1998, the company’s centennial, the lighthouse was relit after being out of commission for several years. 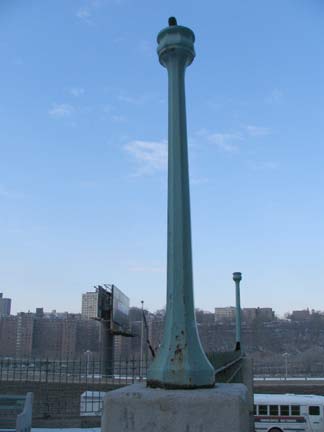 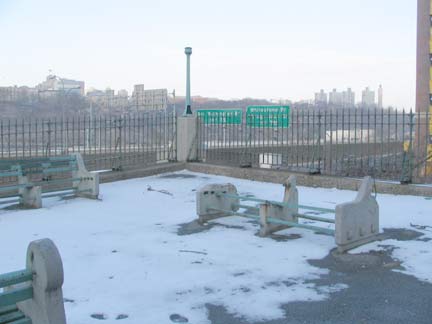 As of January 2005, the Parks Department wasn’t giving much attention to this park, which is across from the Wilson building overlooking the Harlem River. The lamps and benches are about 1925 vintage and likely hadn’t been touched since. 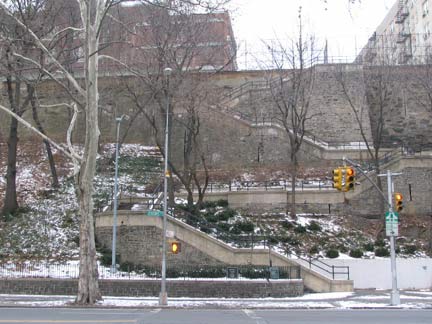 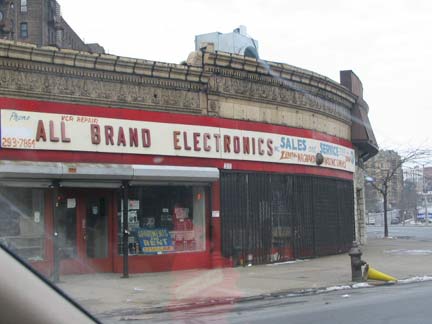 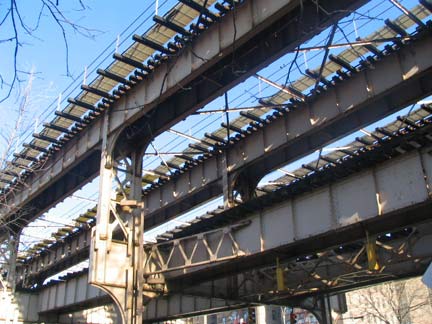 The poles in High Bridge, for some reason, are absolutely festooned with signs pointing to bridges near and far. (I am a fan of these ‘shield’ signs and plan a page devoted to them). 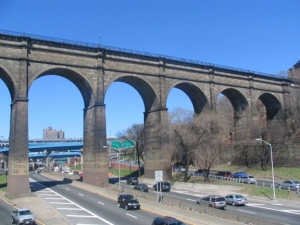 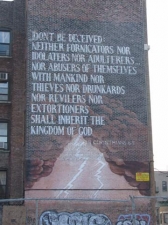 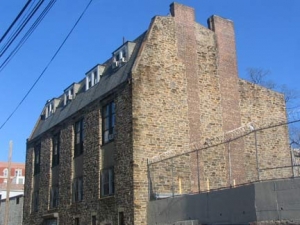 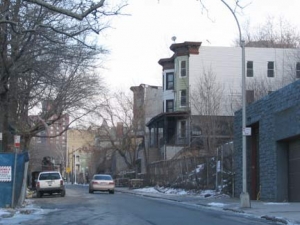 University Avenue (Martin Luther King Boulevard) begins modestly at Sedgwick Avenue and the Wilson building; it gains extra lanes and a center median at the intersection of the Edward L. Grant Highway and the Washington Bridge.

(I couldn’t do a page on the High Bridge neighborhood without, ah, actually showing you the marvelous aqueduct, which was completed in 1848.)

In 1969 (when I was about 16), my parents moved us into the corner apartment at 941 Jerome. This is the “flatiron” style building you have pictured above. We were in apartment 2F, which is on the second from the top floor. (The floors are lettered A-G, because confusingly, there are entrances on three levels of the building, due to its having been built into the side of the hill (not readily apparent in the photo) between Jerome and Anderson avenues. It must have been a difficult plot to build on in 1929 when it was built. Not only is the lobby below the basement, but on the third side of the triangular lot there was an El station for the Polo Grounds spur of the Jerome Ave. line (The third, lower, track in your other photo) There is a small white structure that looks like a 2-car garage between 941 and 1001 Jerome Ave. (also pictured above). That structure was the entrance to the 162nd St station. The racket the trains made must have been incredible, yet neighbors who had lived there since the beginning said they soon got used to it. This was luxury housing ? The small room at the apex of the apartment had not one, but five windows; being a small sun-room, or enclosed balcony (maybe 8-9 feet deep) and had the absolute finest view of Manhattan imaginable. You could see everything from the Chrysler bldg. to Inwood, and across the Harlem River to Edgecombe Ave on Sugar Hill. I hear they’ve destroyed Mullaly Park for the new Yankee Stadium, if so it’s probably destroyed whatever peace and dignity these three buildings still had. Pity.

Yes that was the Jerome-Anderson station officially belonging to the 9th Ave El. The tunnel is still under there (filled with car wrecks — who knows how they got in there). It was sealed a few years ago.

So true they did us dirty there is more there then any part of the bronx . But that bit there is cat city i used to go there when i was a kid exploreing wow .

Wait, wait!!! What is that small, old looking brick building (image shown under image of aqueduct)? I can just barely see it when we’re traveling on the Degan northbound and have wondered for years what it is.

Thanks for any info.