In the fall of 2007, the old, ramshackle, idiosyncratic newsstands that long graced our city’s streets began to vanish, replaced by “ticky tacky boxes,” the identical steel and glass street furniture brought to New York by the CEMUSA company of Spain. When their task is completed, they will have installed 330 franchise locations, seizing over 200 once-private businesses from their long-time owners. 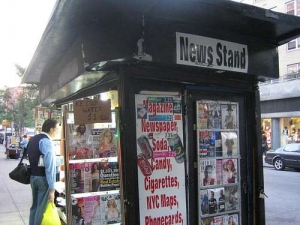 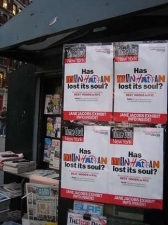 Plans to replace the city’s newsstands have been in the works for years. It was part of Mayor Rudolph Giuliani’s quality of life campaign. But it was Mayor Michael Bloomberg who made it happen when he signed the street furniture bill in 2003, aiming, in his own words, “to rationalize the streets of the city, where right now it’s a hodgepodge of unattractive things.” 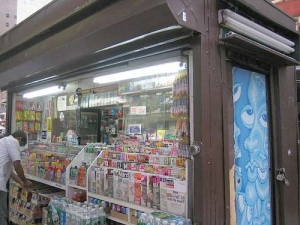 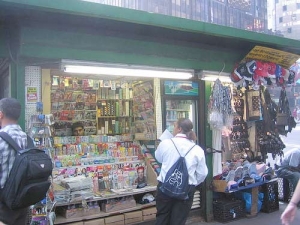 That sentiment was hardly a new one. It seems the city has been waging war on its newsstands for the past century.

In 1911, the city tried to revoke news vendors’ licenses for obstructing the sidewalks. The vendors revolted. William Merican, president of the Newsdealers’ Association, argued eloquently on their behalf, saying, “Why, there are some men who cannot eat their breakfast without a newspaper. Think of the women in the crush of the subway and elevated. They are exposed to every kind of indignity and hardship. They buy newspapers to make them forget their misery. If the public cannot get their newspaper from a person on the street, they will find the inconvenience intolerable.” Mayor Harrison agreed and the newsstands stayed put.

Pressure to remove these so-called obstructions continued through the years and still goes on today. Along the way, every decade also had its “smut drive” to stop the sale of salacious materials. The city pushed and the vendors pushed back. But it was perhaps in 1923 that the unstoppable drive to beautify the newsstands was born.

The New York Times wrote that year, “Why should the sidewalk news stand remain in the architectural class of the squatter’s shanty and the chicken coop? Why shouldn’t it be beautiful or at least not offensive to the eye? The Municipal Art Society asks these questions and replies: “There is no reason why the newsstand should not be in artistic harmony with the splendid skyscraper at whose feet it nestles.” They offered the following design: 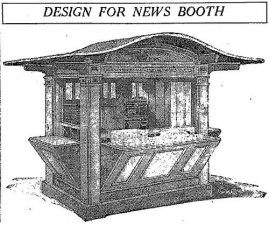 In 1950, the newsstands in the IND subway were to be “dolled up” with chrome, pastel colors, and attendants in uniform who were instructed to say “thanks.” In 1963, to “improve the city’s appearance for the New York World’s Fair” the newsstands got another proposed overhaul: “The gun-metal gray stands will be made of sturdy insulated steel with a baked enamel finish,” and come complete with heating, burglar alarms, and fluorescent lighting. 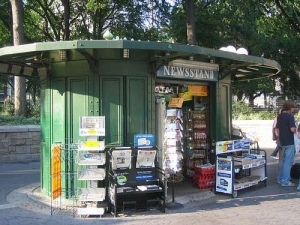 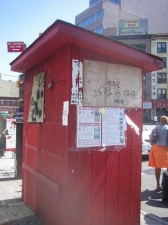 Throughout the 1970s, it seems the city was too busy with other issues to waste its time hassling news vendors. But in the 1980s, they were back at it. A competition was held in 1988 to redesign the stands. The winner said the old stands were “terribly disorganized. They also produce visual clutter because of their tendency to grow with add-on attachments.” 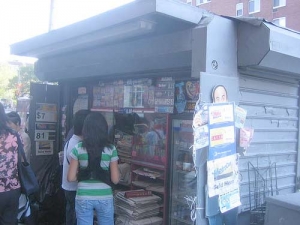 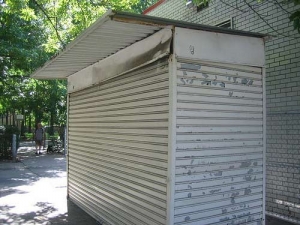 I don’t know what became of all these plans and designs. Maybe a few of the old stands were replaced, here and there, but that only increased their variety. Even the overhaulers of 1988 wanted variety. Said architect Bartholomew Voorsanger, “What’s appropriate for Fifth Avenue might not be right for the SoHo cast-iron district.” But Giuliani and Bloomberg wanted uniformity from one end of the city to the other, and that’s exactly what they’re getting. By the end of 2009 the job will be done. 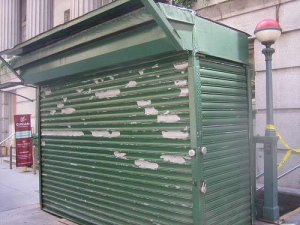 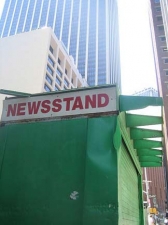 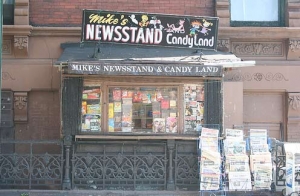 Some newsstands stand out as expressions of their owners’ personalities. A favorite in Harlem, Mike’s Newsstand and Candy Land, run by Michael Chappell out of a 75-year-old stand, features cartoon characters on its sign. Writes Mary Miles in Harlem Live, “This is more than just a location to get your daily newspaper and candy. It is a warm, friendly place where everyone knows each other.” photo: DMNYC

Take time to enjoy the cluttered, unruly, iconoclastic newsstands that remain. Like birdwatching, hunting down the endangered stands, identifying their particular colors and characteristics, can be sport photography.

While green is the most popular color, they can also be found commonly in white, black, brown, and red. Some have striped fabric awnings that roll out, while others feature skylit overhangs or dilapidated duckbills. Some roofs are flat, others are pitched, and a few are topped with copper flashing and finials. One breed comes with heavy-duty storm lamps protected by metal cages, lending it a sturdy tugboat look. Here and there, a showpiece is found, like the Italian-made cast-iron pagoda at West 4th and 6th Ave, or the sprawling multigonal kiosk at Union Square Park. 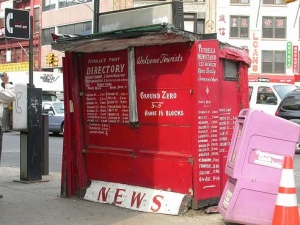 Petrella’s Point was perhaps the most famous city stand. “For 30 years,” writes EV Grieve, “Adam Petrella ran the funky newstand with the directions at Bowery and Canal called Petrella’s Point. (You might remember his portraits of Bruce Lee and Marilyn Monroe that adorned his stand.)” Petrella was removed in 2004. He died not long after. The remains of his stand are preserved in the City Reliquary.
photo: Jack Szwergold 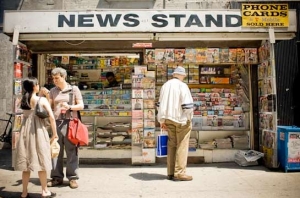 In 2006, photographer Rachel Barrett began seriously capturing the old stands with her camera. On her website, where you can see samples from the collection, she writes,”I was driven by a sense of nostalgia, a need to hold on, a refusal to let go. Photographs allowed me to do that, not just document something but record the end of an era,the what was that will never be again.”
photo: Rachel Barrett

Another victim of New York’s massive shift towards uniformity and away from the renegade eccentricities that long made our city great, these fading newsstands call to mind the following words from Jackie Kennedy Onassis:

“Is it not cruel to let our city die by degrees, stripped of all her proud monuments, until there will be nothing left of all her history and beauty to inspire our children? If they are not inspired by the past of our city, where will they find the strength to fight for her future? … this is the time to take a stand, to reverse the tide, so that we won’t all end up in a uniform world of steel and glass boxes.”

For the city’s newsstands, it’s already too late. 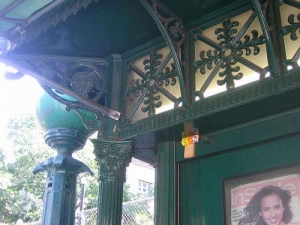 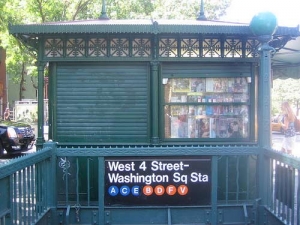 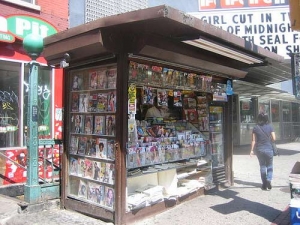 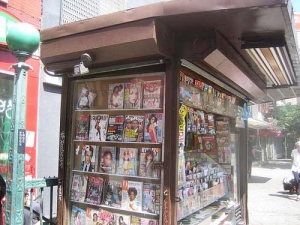 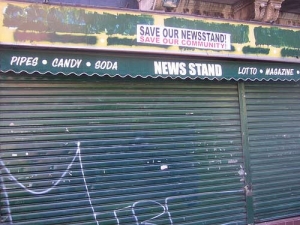 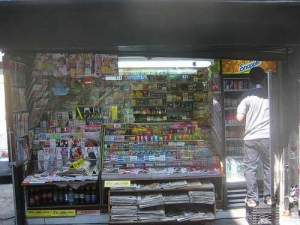 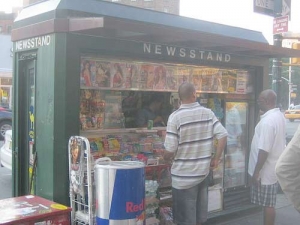 All photos, except as noted, by Jeremiah Moss.