On July 5, 2008 ForgottenFan Vicki and I met on a rather desultory day, with heavy, humid air and frequent showers. After ducking in to see Get Smart (the Steve Carrell version) things cleared up temporarily and it was off to the new Riverside Park along the Hudson River between West 59th and West 72nd. I didn’t see much to Forgottenize that I hadn’t yet (having already done the twisted wrecks remaining from when this was a railyard and floatcar yard) and as showers were moving in anew we headed toward the subway on Columbus Circle along West 59th, where unexpected Forgotten things lurked.

East 59th, and its other name, Central Park South, have all the famed hotels, residences and restaurants such as the Essex House, Ritz-Carlton, Plaza, Sherry-Netherland, Hotel Delmonico, the old Playboy Club, Sherry-Lehmann, Pepsi Cola Building, Bloomingdale’s, and the entrance to the Queensboro. West 59th will have to content itself with… 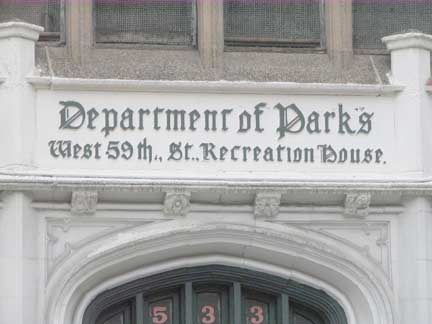 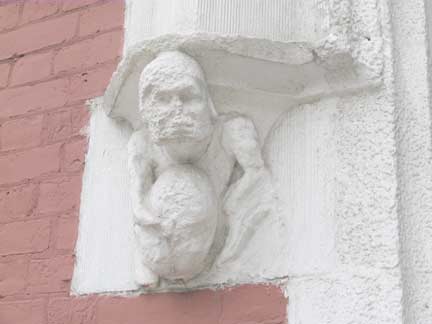 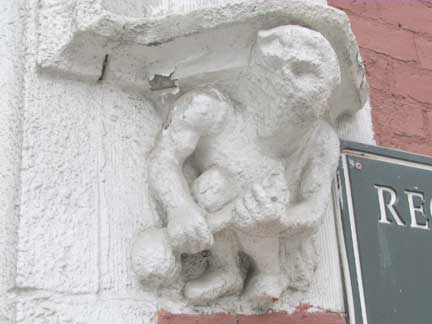 We found the West 59th Street Recreation House at 533, with its ecclesiastical blackletter and pair of crumbling door gnomes, one of which still has a bone to gnaw on. This used to be a public bathhouse, designed in 1906 by architects Werner and Windolf. Many public baths were built in the era when not every apartment or tenement had running water and they were needed for basic hygeineic reasons. Later, many of the baths were converted to public swimming pools (on the ForgottenBook tour, I spoke frequently at Parks Dept. recreation facilities with the smell of chlorine in my nostrils). The pool here closed down in 1990, though there are still facilities here for basketball, calisthenics, etc. Good news: the gem is on the designation list as a New York City landmark.

When was the blackletter placed there? Obviously, it’s not original. 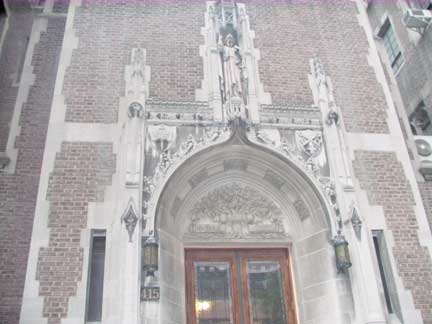 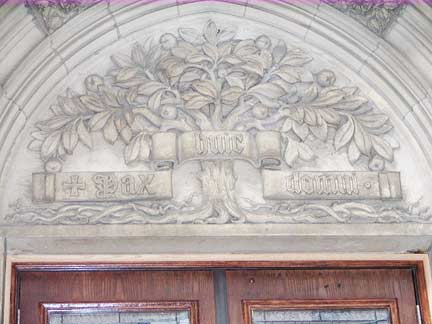 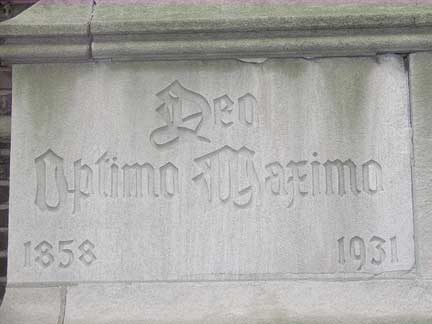 Further along, at 415 near 9th Avenue, we chanced on the ornate Paulist Fathers Rectory. The Latin inscriptions, pax huic domui, and deo optimo maximo, mean respectively: “peace to this place, O Lord” and “to God, most good, most great.” The latter phrase was appropriated from the Roman pagan religion as it originally referred to the “greatest and best god” referring to Jupiter.

Forgotten Fan John Schorn: Knowing your zeal for perfection, I hope you won’t mind me offering acorrection for the last word of the inscription on the Paulist Fathers’ rectory (which is not in an eye-friendly font by any means). It’s “Pax Huic Domui”, which is from Luke 10:5, where Jesus says “Peace be unto this house.”

Most renderings of Latin on buildings and documents are technically incorrect, as they use caps, lower case and word spaces; these are medieval inventions, as Roman Latin used capitals only and no word spaces and punctuation at all.

What is the plant rendered on the carving?

The rectory, of course, is associated with the massive St. Paul The Apostle Church on 9th Avenue, the biggest church in the city. (St. Patrick’s is a cathedral.) 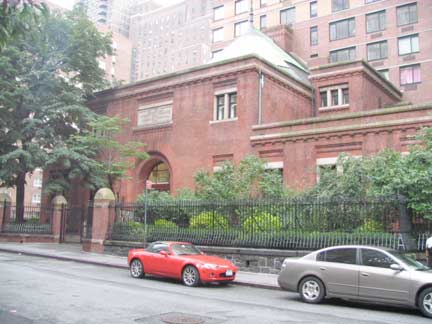 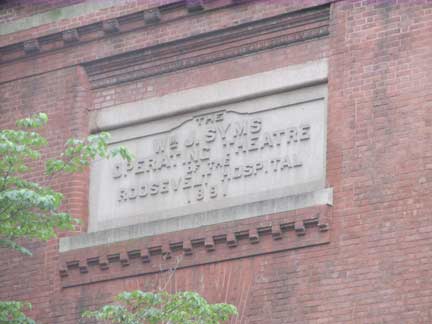 Across the street, an anomaly: the “operating theatre” from the old Roosevelt Hospital has been preserved as the entrance to a tall condo tower built in 1997. I cannot hear the term “operating theatre” without thinking of Junior Mints. It’s chocolate, it’s peppermint, it’s delicious. 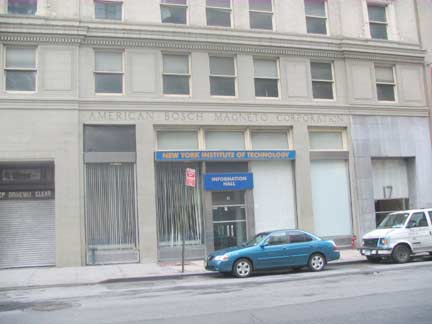 Meanwhile, on West 60th…I was bewildered by the American Bosch Magneto Corporation, which is apparently still in business. Bosch is a German company that makes auto parts.

I was disappointed that this has nothing to do with Magneto and Titanium Man.

WRITING ON THE WALL. Street signs on buildings.