Your webmaster has never met a Denise, or a Denyse, for that matter, who was unattractive. At the same time, Bay Ridge, Brooklyn’s Denyse Wharf, or its remains, are not much to look at. The wharf, however, is a lost treasure of the colonial past and a Revolutionary War remnant.

To arrive at the wharf, the only way is to walk or bike on the 4th Avenue overpass on the Belt Parkway at Shore Road. The path reaches a fork in the road — bear left down the hill to the shoreline bike path and walk forward, under the Verrazano-Narrows Bridge. 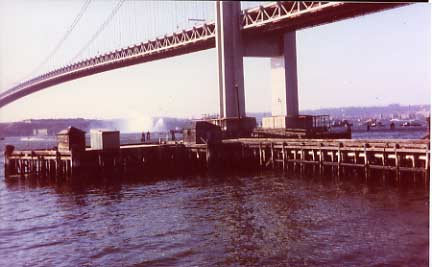 You will soon encounter a concrete jetty leading to an outcropping of stones jutting into the Narrows.

As you can see at left, the wharf used to be a rather important pier. It used to have direct access to the Belt Parkway — you can still see the narrow road that connects the wharf and the Belt.

I had always thought that it was somehow busier in the past, and after researching it I discovered that it is actually a remnant of the Battle of Brooklyn in 1776. 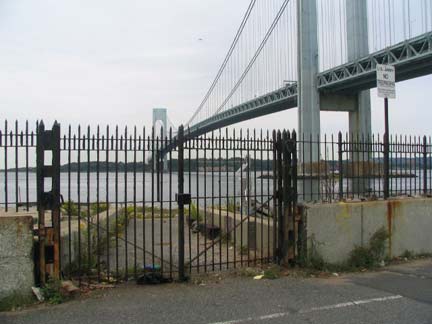 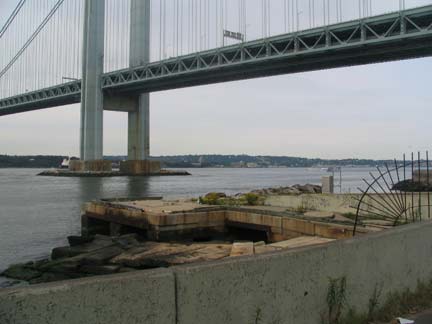 Padlocked to keep out daredevils who may be tempted to swim the Narrows, Denyse Wharf is a true link to the Revolutionary War. In the colonial era, before there was a Fort Hamilton or a Belt Parkway, Bay Ridge was a part of the town of New Utrecht. Three of the town’s foremost citizens, Adrian Bennett, Simon Cortelyou, and Denyse Denyse, had homesteads right about here, and Denyse ran a ferry to Staten Island close to his home. 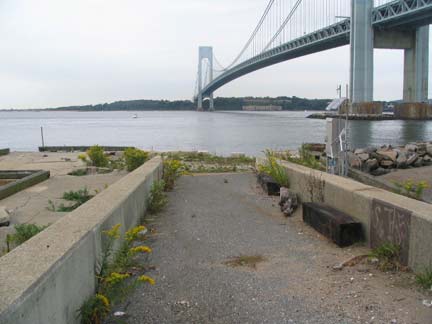 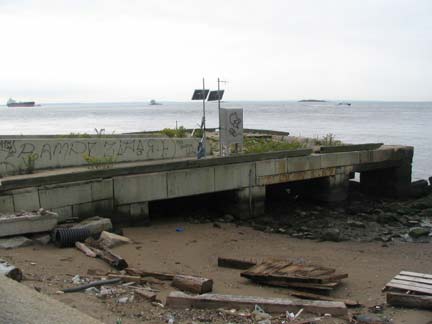 The British and their Hessian and Scottish compatriots under General William Howe chose the Denyse Ferry as the place to land in New Utrecht for a major offensive on August 22, 1776, after massing 437 ships off Sandy Hook by July 12th. The Narrows was relatively undefended since the Americans were expecting a landing at Gravesend. According to legend, a Tory (loyalist) woman waved a red petticoat from Cortelyou’s house to signal the invaders: many New Utrecht residents were loyalists. The patriots had only three cannons on the promontory above the Narrows, and fought vigorously, but the British warship Asia responded by firing a volley that damaged Bennett’s and Denyse’s houses, but curiously, not Cortelyou’s. 15,000 British troops entered New Utrecht virtually unscathed; they were quickly able to overrun Kings County, bivouacking in the various homesteads throughout the locale. Howe himself commandeered Cortelyou’s house. Denyse himself was a patriot. In 1783, when the British evacuated New York City, they left from the Denyse Ferry. 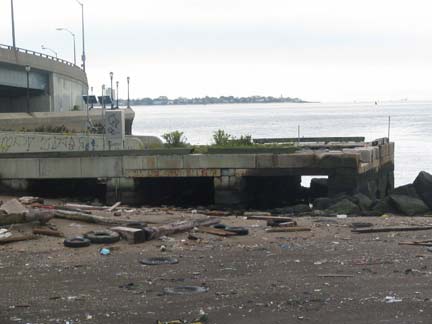 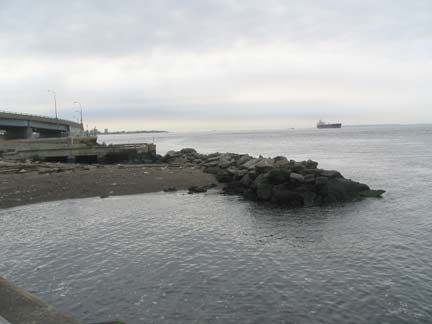 The peninsula in the distance, past the crumbling Denyse Wharf concrete jetty, is Coney Island. Look very carefully and you can barely make out the Parachute Jump toward the right. Dimly seen at the right of the picture is Staten Island. Photo right: are these original stones of Denyse Wharf?

The Cortelyou house stood until about 1894, when it was torn down to enlarge Fort Hamilton. The old ferry landing survived as a pier, becoming little-used especially after the Belt Parkway was built here in 1940, though a direct connection was built to the pier as mentioned previously. By the time I saw the ferry pier in the 1960s, it was a dilapidated T-shaped structure; at low tide, there were wrecked small vessels and discarded tires. A small remnant is still there; there’s talk of landmarking it as the spot where the British entered and left New York during the Revolution. 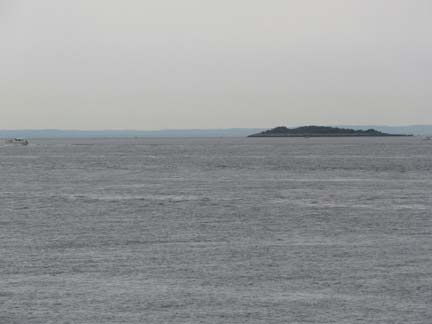 Beyond the wharf you can spot Hoffman and Swinburne Islands, which sit in the Narrows just east of Staten Island’s South Beach. Both are man-made islands (with dredged sand) that were formerly used to quarantine immigrants with contagious diseases.

This is likely Swinburne, since Hoffman is the more southerly of the two.

Marie Lorenz, who investigated the Yellow Submarine of Coney Island Creek, and Rachel Mason rowed out to Hoffman Island, and even braved the Narrows for a swim (not recommended, as the currents may take you where you don’t want to go).

intrigued with your photos and copy — my Mother was a DeNyse and I feel extremely closely
linked to Brooklyn’s past — I remember clearly a print in our home of DeNyse’s Ferry framed in
our entryway as a child in the 50’s.
I would like to discuss with you if possible.
Kindest regards,
Douglas Amery

My great grand parents were Denise. My house Clark Denise has done research on family history. Today I am so.Happy to find this posting .I hope to Have more communications with denise /deNyse.

Are you aware that Denyse Denyse has been banished from the Daughters of the American Revolution (DAR) rolls for no good reason. Steps should be taken to restore this good man’s name.

Compiling a list of “Friends of Denyse Wharf” to advocate for the restoration of this historic site and the addition of a modest environmental science lab for students in the K through 12 schools. Will be doing a beach clean-up in May 2012.

Hi Tom, I’m a young journalist looking to learn more about the work & efforts of Friends of Denyse Wharf – how can I reach you? My e-mail is rebekahfward [at] gmail.com.

I’ve learned that the DAR line has been closed on Denyse Denyse. Explanation is that he “was engaged in activities that supported the British as late as Aug 6, 1782. Need to prove service after this date.

I am descended from Denys Denyse and Jaques Cortelyou. I remember , as a child, going on Denyse Wharf to get on a landing barge to be taken to the USS Missouri. The USS Missouri was anchored off Fort Hamilton and the public was allowed to visit her. Most of Bay Ridge went on the ship that day. We saw where the Japanese signed the surrender to end WWII.

A work friend sent this to me. I have several news articles on the Denyse family in Staten Island. Godsey Denyse was sheriff of Richmond County in the 1800,s. My grandfather Mort Denyse was some type of government worker there in the 40’s before he moved to NJ. I now live in Flemington NJ where I grew up.

I am a member of the Denyse family. My mother and her parents were from New York and the surrounding area. My grandfather was Louis Denyse Gully, a great aunt Marion Denyse, my mother Edna Denyse and her first cousin Louis Denyse Gully who was from the Augusta area.

I continue to research the Denyse family name but have lost the thread with my grandfather.

I came upon this site while surfing the web. The name caught my eye since my maiden name is DeNyse. My father was Edgar Albee DeNyse (b 1910, d 1991). His wife was Helene Condon. She was one year younger and passed away in 1990. My parents were both born in Brooklyn. Their only children were me and my sister and we are identical twins.
We have not lived anywhere in the New York area since finishing college, back in the 60’s.
I have never been much into ancestry studies but my father, back in the early 80’s, (after my parents had left New York and moved to be near me in New Hampshire), corresponded with a Mrs. Janet Morgan of Staten Island (subsequently moved to MA) who was researching DeNyse lineage going back in the 17th and 18th centuries and found a connection to the Vanderbilt line through marriage. She passed along a 7 page document she received from another party and derived from the Monmouth Families Volume I. Mrs. Morgan apparently was looking for a Stillwater connection, but there is quite a bit in these pages about DeNyse geneology from Holland I the 17th, even 18th and 19th centuries. I admit to not being overly adept at reading this material but thought I would share this information that was left by my father.

I too am a descendant of Denyse Denyse, but our line moved to Louisiana in the early 1800s. I too have been looking into the Stillwell connection as one of my ancestors married an Ida Stillwell and had a familial connection to the Vanderbilts. My father stil remembers talk in the family of Ida Stillwell. I would love to see restoration of landmarks of ancestors and U.S. history. I would love to compare genealogical notes with you as well.

Noted with interest on 2/12/18 by Allan Jepson Wheeler son of Clinton Denyse Wheeler (1908 – 1996) who was son of Emma Denyse Wheeler of Greenlawn(Huntington) NY. Emma was born in Brooklyn to John Denyse who had served in the Civil War. Clinton, born in Greenlawn where John Denyse had a home(and a traven?). Clinton owned the local Ford dealership, Sammis & Downer(now Huntington Ford), until 1970 when he moved to Anna Maria Is. Florida. Allan, born 6/4/37, now lives in Santa Fe NM. and has two daughters,Tracy and Erica. Allan is an historian of the old Santa Fe Trail and Northern New Mexico(see website “William Becknell.com,).

Being a true Denyse, I find you all phoney and baloney. Where is Dinsdale?

The British Bombarded the heights around Denyse Wharf, but the actual landing occurred in Gravesend on what was then beach close on the Cropsey Avenue and Bay Parkway interchange. Here’s the Wikipedia link:
https://en.wikipedia.org/wiki/Battle_of_Long_Island
Before all the area between Cropsey Avenue and the Belt Parkway was filled, the water was shallow with a pretty hard sandy bottom. Perfect for landing the longboats at high tide, but any tide would do.My ancestor, Lt. Harmanus Cropsey as well as his father, Quartermaster Casper Cropsey, were subsequently captured. Lt. Harmanus was imprisoned on the HMS Jersey hulk. He escaped by swimming to Staten Island, according to family tradition, to again take up arms, prisoners that swam to nearby Brooklyn and caught were summarily executed without trial by the British. Quartermaster Casper was under house arrest for the duration with British troops billeted in the house and outbuildings.

Of the two man-made islands off Staten Island, Hoffman is the northernmost, Swinburne is south. To help remember, Hoffman with an H is closer to the Harbor; Swinburne with an S closer to the Sea.

I am denyse denyse Anderson , my grand father was Louis Dallas Gully and his wife was Edna denyse Gully my mother’s mother. I attended both their funerals.Who is the. Never heard of son? My never heard of great uncle?