Your webmaster spent the dying summer embers of 2008 in Red Hook, Brooklyn, a neighborhood I had not been in in about three years (since 2005). The reason being… I was holding out and waiting for the latest round of sweeping changes that have taken hold here to be completed: more than any other Brooklyn neighborhood, developers and retailers are changing the ‘Hook from a sleepy bastion of dying waterfront and sleepy side streets into a recreation mecca. My feelings about it are definitely mixed about new money flowing in where the remnants of old pursuits had held on for innumerable years.

I was sure to make my way to Halleck and Beard Streets between Columbia and Van Brunt, where in 2008 a massive new Ikea furniture store has pushed out a historic shipyards. Before I show you what it looks like now, let’s ask Whit Bissell and Lee Meriwether to set the controls for 2004 and we’ll jump into the Irwin Allen Time Tunnel… 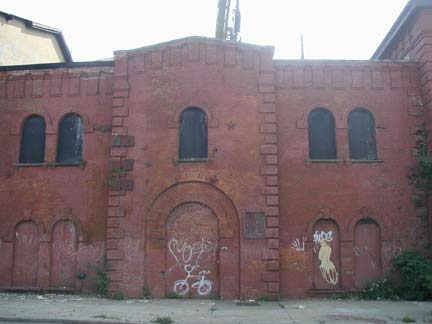 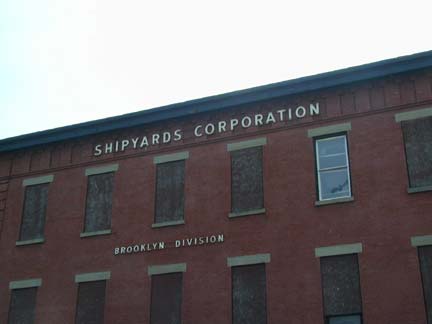 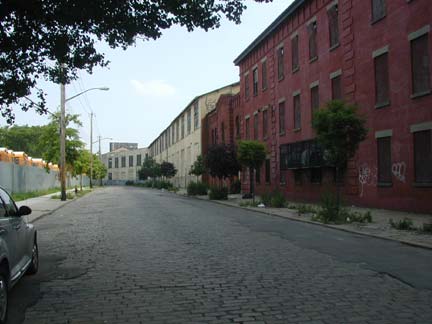 A look southeast down Beard Street from Dwight, in 2005, revealed Belgian-blocked streets fronted by the offices of Todd Shipyards Corporation.

The Todd Shipyards, also known as New York Shipyards, fronted along Beard and Halleck Streets west of Columbia and once sported the largest dry dock on the east coast. TheMonitor, the first ironclad vessel from the Civil war era, was repaired here. The yards featured brick structures with heavy timber posts and machine that have 1920s-era Bauhaus industrial design highlights with skylights and 20-foot-tall windows.

William H. Todd (1857-1932) was a shipbuilder and philanthropist. After an apprenticeship in Wilmington, DE, he worked at the Brooklyn Navy Yard and Robins Dry Dock, rising to president. During World War I he engineered a merger with two other shipbuilders and bought out two others, making Todd Shipyards the pre-eminent ship construction and repair company in Brooklyn. 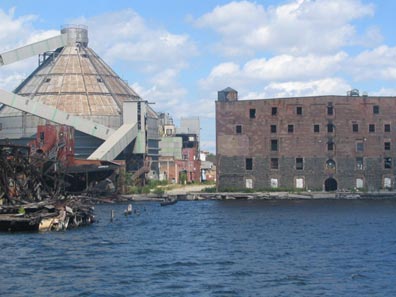 Revere Sugar Refinery (left) and Todd Shipyards offices. Both were torn down between 2004 and 2007. 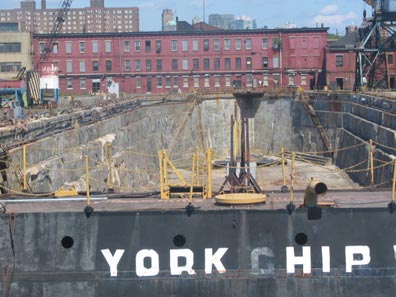 The Todd Shipyards built warships and destroyers during World War II. Following the war, the shipyards in Red Hook shifted its focus to repairs only, with operations ceasing completely here in 1986, but Todd continues to repair and build ships in three other locations in the USA.

In 2006, Ikea, the Sweden-based furniture retailer, purchased the property and went about demolishing the shipyard, graving docks, and offices. Today the only trace of the shipyards is Todd Square, a triangle at Columbia and Halleck Streets, across from Red Hook Park. 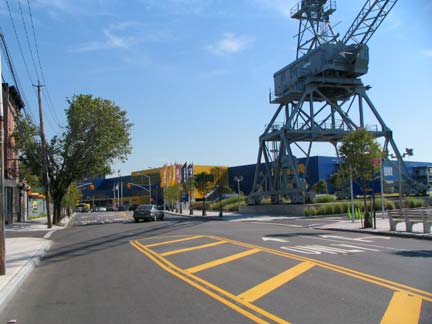 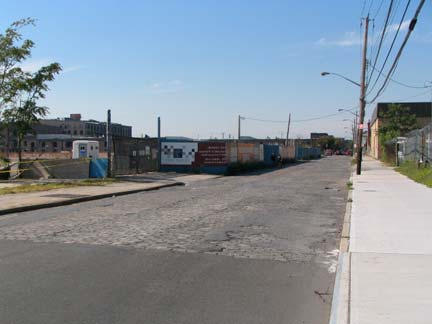 Here’s a look at Beard Street in 2008, again from Dwight, southeast (above) and northwest below). The formerly sleepy street becomes a multi-lane behemoth as it carries traffic from Columbia Street to the massive Ikea parking lot. South of the megastore, though, Beard Street reverts to its longtime status. 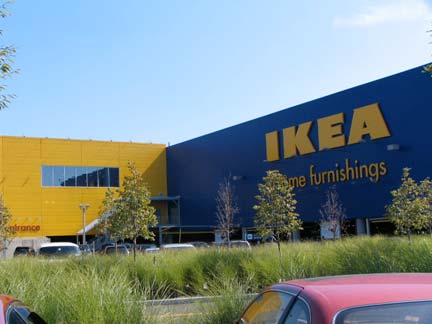 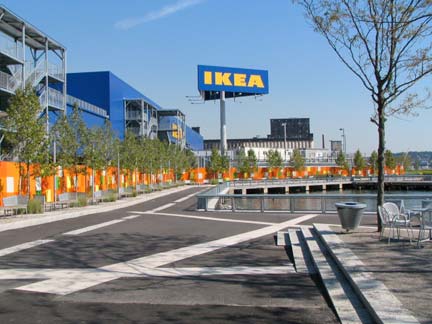 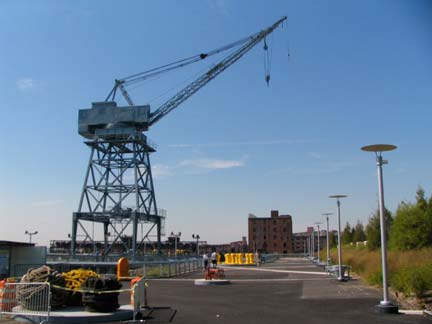 Ikea has constructed a waterfront walkway along Erie Basin in the old Todd shipyards. The retailer has taken pains to preserve, at least in part, the maritime legacy of this part of Brooklyn, including four massive sweeping cranes once used for loading and unloading. These tower over the area like the Martian tripods in H.G. Wells’ War of the Worlds. Waterside accoutrements like bollards (ships were tied to them), ropes, and winches have been installed along the walkway. Chocks, used to secure boats, have been arrayed along the grass facing the walkway and emblazoned with the names of ships that once docked here, such as Elin Hope, Kythnos, Delgado, Resolute and Gulf Glow. They seem like tombstones. In the 1990s I used to buy from Ikea — but your admittedly clumsy webmaster found their fare incredibly difficult to cobble together. For a few years I lived with a hi-fi console that listed slightly to the left, and slept on a bed whose wood slats kept dropping to the floor because I couldn’t fit the pieces together just right. So, I had to get up in the middle of the night sometimes, remove the bedclothes and mattress, and put the wood slats back in place.

So, after a few years of this I realized that, along with a usurious $79 delivery fee (the fee is more than half of what it costs for the TV stand shown here) I have never been trained as a carpenter and decided that I did not want to be one after all. I switched to another furniture retailer that not only builds the furniture for me, it charges just $25 delivery. There is a bit left of the shipyards... a faded sign on a building says “Voyage Repairs” and a bit of the graving dock and piers are still there. But they embellish one of Brooklyn’s biggest parking lots and a sea of cars.

In the end I suppose there is not much Ikea could have done to satisfy me here; the waterfront walkway is pleasant, if concrete-laden, and the maritime theme is sincere enough.

I suppose I want a return to the waterfront the way it was, with manufacturing, shipbuilding and stevedoring…working. The realities, though, were a choice between decaying remnants of a maritime past, empty and ghostlike, or a bustling furniture store providing employment to area residents, some of which are from the projects and needed the break.

So, the big boxing of Red Hook proceeds apace.

An opposing view from ForgottenFan Frank Schifano…used with his permission:

IKEA has done a fairly good job with the park, and it is good to see the land being put to use rather than remaining a decaying abandoned site. I agree that it would be nice to see the place as a working shipyard, but those days are long gone, never likely to return. What we have now is certainly better than nothing at all.

Like you, I’m drawn to these kinds of places; and I can often be found photographing the remains of what once were a vibrant part of our city. But Iíve also talked to some of the people who live in the area and are now employed by IKEA. For these people, this is the best thing that has happened to them in a long time. For some it is the best thing that has ever happened. There is one young woman in particular who stands out above the rest in my mind. A well spoken, obviously brighter than average, and well informed young single parent, she had never been able to get a break and get out of the festering hellhole of the projects she calls home. IKEA gave her that break. She now has healthcare insurance, a steady income, and most importantly to her, access to day care for her children. This, in turn, has given her a chance to further her own education in the hopes that she will be able to leave the projects for a better life. Not does this opportunity benefit her directly, but also has a positive influence on her children.

Now, I know this reads as all kinds of corny, sappy, and clichéd; but it’s true. I only wish that the people who spend so much energy grieving over the loss of what once was would open their minds just a little bit to see what can be done, instead of focusing on whatís been lost. Everything changes, and change is a constant. Without it we would no longer exist. Maybe I am the quintessential optimist. Many have been the times when I’ve been criticized for my views. I prefer to remain an optimist. Pessimism and pointless cynicism lead nowhere save a dead end.

thank you Kevin, and thank you Frank…for thoughtful, articulate and well-balanced remarks concerning the Red Hook waterfront, past and present…very much appreciated insights. As a tour guide, I too am drawn to the Past, and some of the rough edges and debris that remains when the tide goes out. We should not wallow in nostalgia, though. Frank, there is nothing corny or sappy about your story of the young woman who is benefitting fron the new developement. We know there are more like her too. The best, and harshest, description of nostalgia that I’ve come across is in the book “Low Life” by Luc Sante, a man who apprecitates history but refuses to wallow in it: “A common word for this kind of distortion is nostalgia. This word can generally by definded as an inarticulate contempt for the present and a fear of the future, in concert with a yearning for order, constancy, and safety, and community – qualities that were last enjoyed in childhood and are retroaactively imagined as gracing the whole of time before one’s birth.” We can leave the business of nostalgia to Disney. We respect history when we keep one eye trained on the present, and the people living in it.

Kevin, the wife and I paid our first visit to Ikea and Fairway Red Hook. We were last through here on a tourist visa 25 -30 years ago. I’ve wanted to come back since reading your pages. Very interesting. I’m surprised the gentrification hasn’t accelerated, although that’s probably the economy. Coming in, under the Gowanus Expressway, the drawbridge honored us with a raising. Very nice modernized bridge. HUGE crowd at Ikea. I like their stuff. Got tons of it.

I used to buy Ikea fare but I don’t drive and can’t afford their usurious delivery charges. And, I’m just not talented enough as a carpenter to put their stuff together. Everything I got from them I had to jury rig together. I have bought from from Gothic Cabinet Craft for years– they assemble it for you, and the delivery charges are reasonable.

I like this park a lot. It is so interesting to see this old warehouses and the old harbor.