I’ve been aware of Dennet Place since I first started perusing Hagstrom maps, specifically September 1968 (age 11) when I acquired my first one, at Gertz on Jamaica Avenue, in precincts far from my parents’ Bay Ridge base. We were on a mission to get a wall unit for the old man to put all his reel to reel tape recorders, cassette decks and stereos; he was as much an audiophile as I am an urbano-forgotteno-phile. We went to a nearby restaurant and he sent the steak back twice because it was pink in the middle. The things you remember.

Till the 1980s, though, Hagstrom had the name of this alley all wrong… 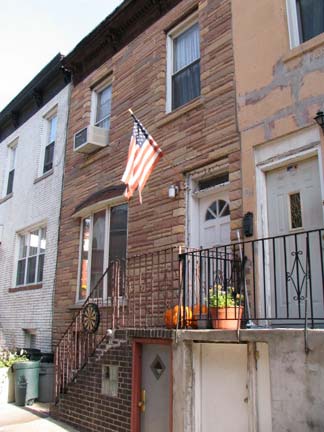 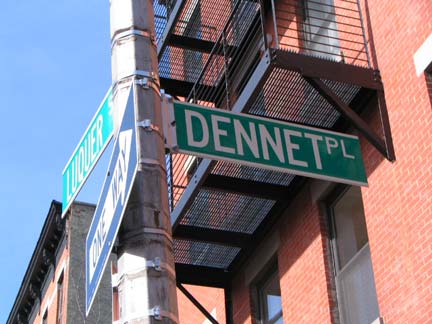 Older, hand-drawn Hagstroms always rendered this tiny alley, betwen Nelson and Luquer Streets just west of Smith and the IND concrete trestle in Cobble Hill, Brooklyn, as Bennett and later, Dennett. It wasn’t till I flashed past on a bike in the Super Seventies that I ascertained that yes, there was indeed an alley here and it was spelled Dennet. 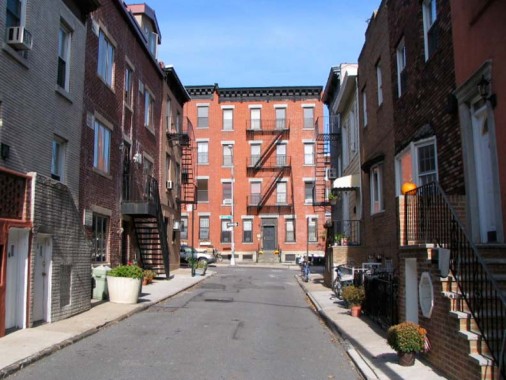 Even Google Maps, infallible as the pope, has the spelling wrong. (Or did. They have fixed it now.) To those who are not Cobble Hillers, or are otherwise unaware of the area, coming upon this narrow lane is a revelation. They just don’t make them like this in alley-poor New York City. I can’t account for its origins, or the derivation of its name; perhaps it’s as simple as a guy named Dennet lived here. It’s been here a long time, though — Dennet Place turns up in this city directory published in 1876. 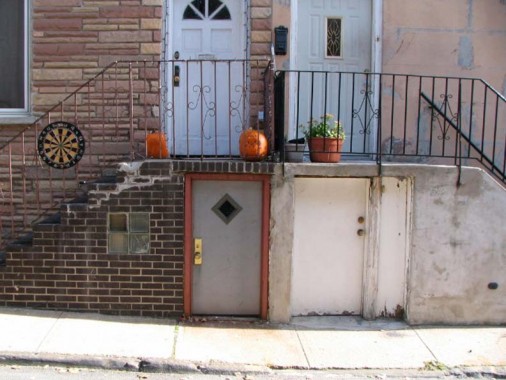 Dennet Place is lined with small, two and three-story attached houses, some with dormers, some without. They are arranged in groups of two, with a double staircase in the middle serving each. Below the stairs, each house has a miniature door, most about 4 feet in height. I don’t know anyone on Dennet Place, so my guess is that they lead to basement apartments and the short doors accommodate steps going down. 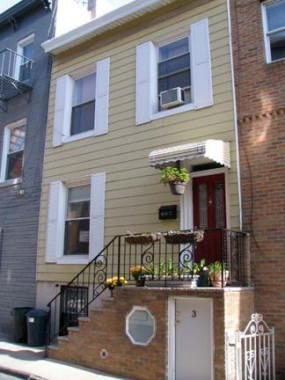 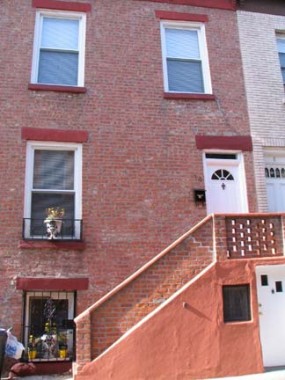 Most of the houses have long ago been covered with siding, some more esthetically challenged than others. (I like the treatment at left.) Some, though, have kept their original brick cladding and have even had it repointed, and the staircase in front given a complementary makeover. 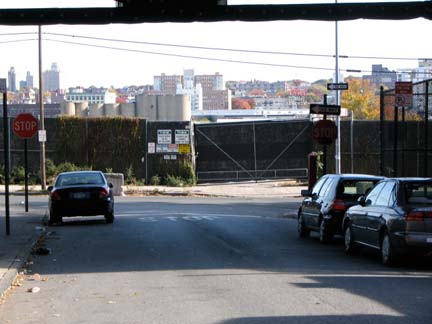 Luquer at Dennet, looking southeast. Can you pick out the Eagle Clothes sign?

Dennet Place is easily spotted from the right side of the F train as it rumbles southbound over the Smith Street trestle. Perhaps, that’s where the art directors for Spider-Man III saw it and used it in a scene. I don’t know if wash has ever been hung over the street like that, though. Not only is it impractical it’s also likely illegal.

I grew up on Luquer St and remember quite well Dennet Place. As a kid and my friends always said they were the homes for the little people. Enjoyed the pictures.

Dennet Place is in Carroll Gardens not Cobble Hill.

I grew on the block, you actually have pictures of my house above, the small doors are indeed a mystery. My family has lived in the house since they were built as have some of the neighbors. We have no idea why there are small doors but most of them do lead to a short staircase to a full sized door that then enters into a. a 1 bedroom apt. b. basement c. additional bedrooms/ living rooms with 10 ft ceilings. There were never any hobbits or little people, mostly just italian families who sold pasta and sauce from their homes. The bottoms floors were all originally storage rooms for coal/wood and had dirt floors. My great grandfather used to make alcohol in the basement during prohibition and also used it to store wood for the multiple fireplaces that were on each floor.

Can’t believe this website exists. I had a friend, Joy, who used to live on Dennet Place. It used to be called “Cat’s Alley” – does anyone remember that? I was born in Carroll Gardens – lived on 4th Place. Went to St. Mary’s which was right behind Dennet Place. I live in NJ now. Still miss Brooklyn,

I remember a deli on the corner of dennet and luquer in the 40sand 50s. Went to st marys

The “joy” referred to in the article is most likely joy casale….who babysat me many many years ago when my family grew up there…