New York City and United States history can be gleaned from the most mundane, unexceptional places. There’s a tiny street on the Cobble Hill-Red Hook border that exists in two sections, having been ravaged by the Brooklyn-Queens Expressway and submerged under the Brooklyn Battery toll plaza, that remembers the family that produced the very first European child born in the colony that would become New York state.

Rapelye Street runs from Henry to Hicks and from Hicks again (with an interruption by the BQE) west to Hamilton. 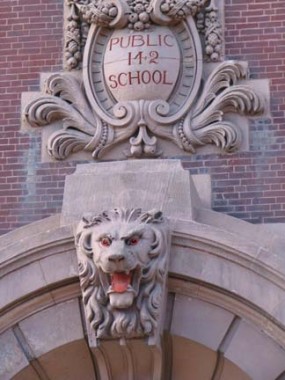 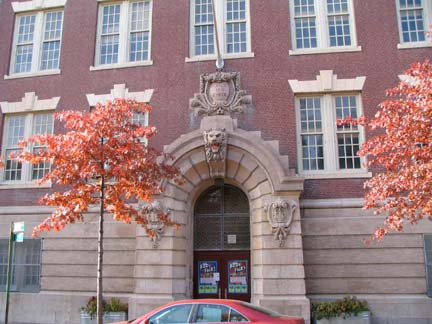 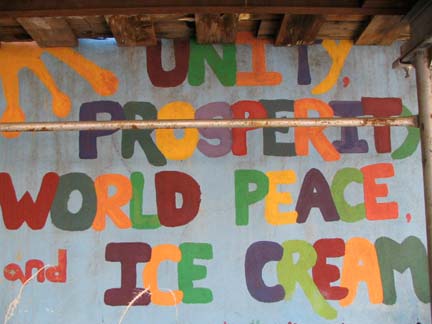 PS 142, Henry and Rapelye Streets. Someone has taken the time to paint the lion’s eyes and tongue red. Below right: leftover campaign promises.

19-year old Joris Jansen de Rapelje and his wife, 18-year-old Catalyntje Trico, arrived in North America in 1624 from the Netherlands, on a ship called the Eendracht (Unity), accompanied by several other families, Huguenots who intended to escape the provincialism and religious intolerance then in control in Holland. After arriving in the harbor in what would, over the next few decades, be transformed into New Netherland, the Unity sailed up the Hudson River 130 miles to Fort Orange. The Rapelje’s daughter Sarah was born there, and she is regarded as the first child born in what’s now the state of New York. 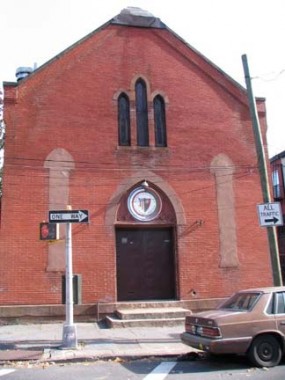 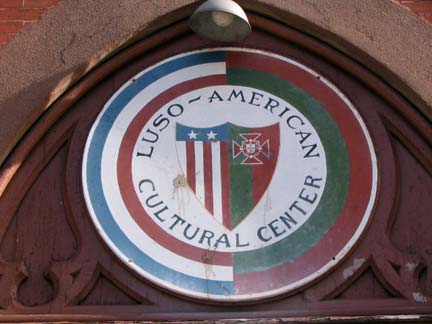 Luso-American Society, across from PS142 at Henry and Rapelye, is in the former St. Paul’s Lutheran Church, built in 1872. The tile refers to the Portuguese; it is a remnant of the once-plentiful Portuguese contingent in this area in Brooklyn. The cultural center has met here since World War II.

I’ll admit to not knowing the derivation of the term Luso-American, but it just may come from Lisbon, or Lisboa in Portuguese. Adjectives derived from place names sometimes don’t resemble their noun forms at all — witness Lettish for the language spoken in Latvia, or Oxonian and Cantabrigian for residents of Oxford and Canterbury, England.

Forgotten Fan Matt Wilkins: The “Luso-” in “Luso-American” comes to us from the time of the Romans; Pliny the Elder referred to the people who lived on the western side of the Iberian peninsula (in more-or-less the area we call Portugal) as “Lusitanians” but this name was in use before the Romans came on the scene.

I know it’s Wikipedia, but here …

Many Portuguese cultural groups refer to themselves with the adjective “Lusitanic” or “Lusitanian”, in the same way that things having to do with France are called “Gallic” or those relating to England are “Brittianic”. [The steamship, Lusitania, sunk by the Germans in 1915 during WWI, was named for this province.]

Lost New York City had an item about this building and its interior in April 2011.

By 1626, a year after Sarah’s birth, Dutch authorities relocated the families at Ft. Orange to Ft. Amsterdam at the southern end of Manhattan Island. There, roads were being laid out, farms established, houses, a church and a large storage facility built. The Rapeljes built a house near the East River, and were there during the murderous Kieft War (1643-45), which began when the Dutch governor, Willem Kieft, attacked nearby Delaware-speaking Indian villages. Thousands of Indians were killed, as well as a number of Dutch settlers. One was Sarah’s baby brother, Jacob, who was born in 1639 and was killed, probably in 1643.

In the mid-1630s, about a decade before the start of the Kieft War, the Rapeljes exchanged trade goods with the Canarsie Indians for 335 acres on Long Island, at a place called Wallabout Bay, which was near the present-day site of the Brooklyn Navy Yard. A 19th-Century account says their house was “the first house on Long Island, and inhabited by Joris Jansen de Rapelje … [the father of] Sarah, the first white child of European parentage born in the State.” 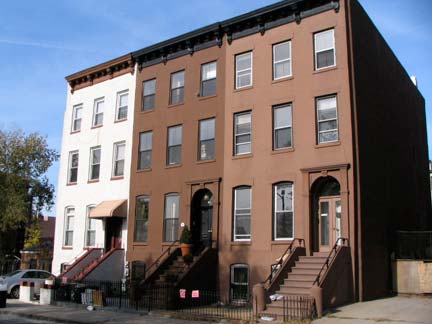 Brownstones (and a whitestone), Rapelye between Henry and Hicks. 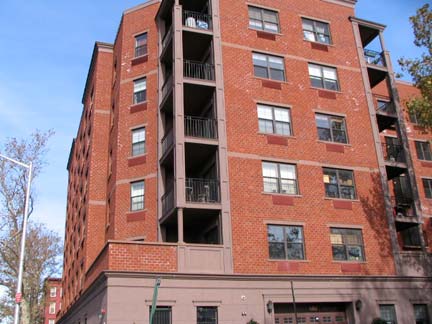 New condominium, Rapelye and Hicks, east of the BQE. 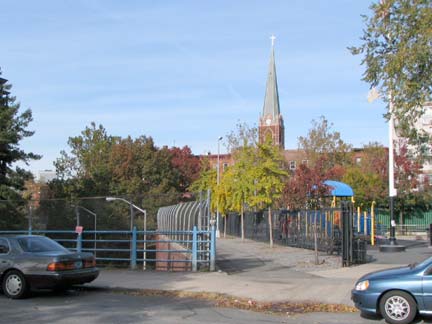 For such a short street Rapelye encounters the Brooklyn-Queens Expressway twice. It is bridged over a ramp that connects the Brooklyn Battery Tunnel with the northbound BQE (left) and is interrupted by the main section of the BQE, which is depressed between two sections of Hicks Street. The spire of St. Stephen’s Church (Sacred Hearts of Jesus and Mary) Church (1860) on Summit Street looms behind.

Few chapters of Rapelje family history are more compelling than the one written by Peter Rapelje, the grandfather of the current Peter [of Glen Cove] , who was born in 1873 on the family farm in New Lots, 10 miles from Joris’ first land purchase on Long Island. This family had not wandered far from where they began, a testament to their attachment to a place that had sustained them for so long.

This Peter broke from the generations of farmers and earned an engineering degree from Brooklyn Polytechnical Institute. He worked on the first subway tunnel that connected Manhattan to Brooklyn — the very tunnel that brought the shift in population that would later erase his farm from the map. His photographs of that tunnel fill one of the Rapelje family’s albums…

Peter Rapelje the engineer and amateur photographer traveled all over taking pictures — thousands of pictures.

“The story is that he walked all over to take the pictures,” said Eleanor Rapelje. “Peter was very upset about what was happening. My Peter’s aunt said her father believed they were tearing down history. Taking these photographs was his way of preserving it.” [sounds familiar eh? –your webmaster]

In 1941 and 1948, grandfather Peter also wrote two long accounts of his childhood, remembering how rooms were laid out in the family’s farmhouse — “Grandma always kept her flowers in the northwest corner of the northwest room” — and recalling the sights and smells of his childhood. “In the evenings my grandfather used to sit in the sitting room on the left side of the fireboard with his chair tipped back against the mantel. The rest of the family would gather round the center table on which stood the kerosene lamp for reading.” New York Newsday 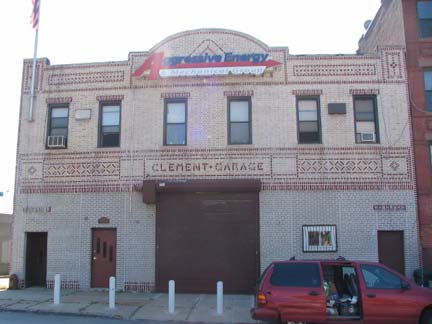 Clement Garage, Rapelye and Hicks, west of the BQE. 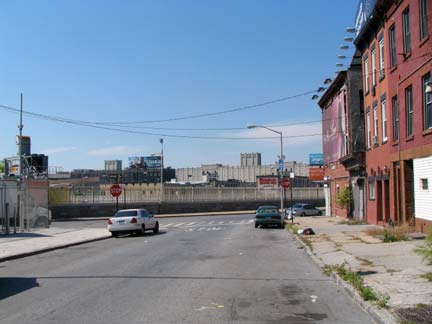 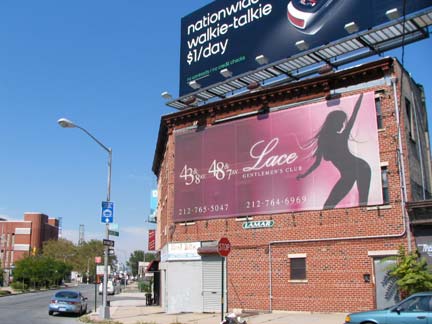 Rapelye at Hamilton. This ad reminds me of the late Yankee, Billy Martin, who got into a bar fight at a topless place called Lace in Arlington, TX during his 5th tour of duty as Yankee manger in 1988. Steinbrenner fired him a few weeks later, and Billy died in a car wreck on Christmas the next year.

Dirty Sexy Money, Hamilton at Columbia and Rapelye. Never are TV shows or movies made about philanthropists, for the same reason that there are no movies called Zack and Miri Volunteer at a Homeless Shelter. Bad people are more interesting to watch.

After reading an Long Island Life story about the Rapelje family of Glen Cove, more than 50 people from across the country contacted the family to say they, too, are descendants of Sarah de Rapelje — the first white child born in what is now New York State.

“We have received calls from California, Florida, Rhode Island and a number just from Long Island,” said Peter Rapelje, whose family has collected Rapelje memorabilia that dates back to the 17th century. “I would never have thought the response would be this great. People are sending their genealogies to me. It’s wonderful.”

One of those who saw the story was Clarence Rapelyea, who traces his ancestry back to both Sarah de Rapelje and to the Matinecocks who lived along Long Island’s North Shore.

“My family has always been proud of our Rapelje ancestry,” Clarence said. “It’s fascinating that it dovetails with Native American history, too.’‘ —Chicago Tribune

I was unaware of how to pronounce the street name until just recently: I’m not sure how the local denizens do it, but the traditional pronunciation is RAP-pel-yay. It has had several spellings since the original Rapeljes arrived (there are other Dutch names in the city ending in -ye or yea, such as Duryea and Conselyea).

Hello there, simply changed into aware of your weblog through Google, and found that it is truly informative. I am going to watch out for brussels. I

Just found this site…..my father, Anthony Yodice (also spelled Iodice) ( was born at 141 Rapelye Street 1907 or 1908, and was baptised in Sacred Hearts of Jesus and Mary. I plan to visit both places in the not to distant future.

I have an ancestor named Epnetus Rappelye, about 1800, New York State. She maried a John Booth. Any record of such a person?

I’m a descendant of Joris Rapelje through the Ryerson/Reading line.

Aloha! Decendent of sarah and joris. Family line traves back to 1604.

Im a descendant of Joris Rapelje. I have a genealogy but some generations are missing and its a shame. We descend from Daniel, the youngest child of Joris Jansen, who married a Miss. Clock. A latter surname of the Rapelje family is Harris, a g-g-g-grandfather who lived in Portland, ME and Rahway, NJ and was a naval officer during the battle of Ft Sumter in the Civil War. A couple of sites on the internet don’t list the correct genealogies of Daniel up to my family but it would be nice to find someone who has the right one. Anyway, we haven’t move far away from Brooklyn (now New Jersey), but our family did move back to Ireland for a century before coming back to New York and Jersey.

Who remembers the Rapelye St Exit from the BQE, where it would narrow from 3 lanes to 2 and cause a massive traffic backup.

I am also a descendent of Joris and Catalentje Rapalje…but that’s no spectacular feat. There’s a lot of us! It is estimated they have over a million descendents. That would certainly be a fun family reunion. . .
It is utterly amazing when you realize it all started with a newlywed couple coming across the ocean to the new world. Marrietje Rapalje was the second child born to them and she is my ten times great grandmother. She married Michael Van Der Voort and her line travels through seven generations of Van Der Voorts down to the Trumpour line and my mother, Sharon Trumpour.
I’ve been researching my genealogy for decades, and it is always a treat when I discover connections to known figures. Sarah Rapalje Bergen Bogeart, the first child born to the family, is the woman whose lineage is responsible for at least two well-known actors and a famous newsman: Humphrey Bogart, James Spader and Tom Brokaw.
Hope to someday get to New York to see Rapaleye Street and try to figure out where the initial Manhattan homestead was located. Hello to all my cousins around the country!

I am also a descendent of Joris and Catalentje Rapalje’s first born Sarah who married Hans Hansen Bergen. I’ve been busy filling out this branch of my Family tree and reading up on the early settlement of Manhattan. I too, hope to set foot on RAPELYE street this fall when I visit NYC, and visit many of the sites and graves of our ancestors. For anyone reading this, read “The Island at the Center of the World” by Russell Shorto.

Joris & Catalyntje Rapalje are my 10th great grandparents…this is an exciting discovery for me!