Remember that episode of Star Trek when the giant microbe ate the Enterprise? At the start of the show, Mr. Spock is looking into his scanner and suddenly gets a shocked look on his face. Any emotion from the Vulcan is a notable occasion, so Kirk asked him what the matter was, and Spock explained that a Federation ship staffed entirely by Vulcans had died or disppeared (I forget which). Scoffing by McCoy ensued.

I’ve been accused of being somewhat emotionless myself (and somewhat motionless, for that matter) but I do get a pang of regret and sadness when another of NYC’s classic lampposts is cut down, and it’s with a tinge of lugubriousness that I must announce that the longstanding Type 24M twin at the SW corner of 5th Avenue and 23rd Street has disappeared. 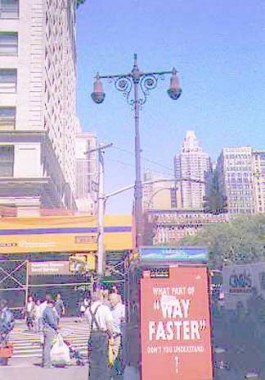 For fans of NYC’s castiron Twin posts,which bear two luminaires for the price of one, a key intersection has always been the intersection of Broadway, 5th Avenue and 23rd Street, where three classic Twins have been preserved: two Type 24M’s, one on the SW corner and one on the traffic island, and a hybrid post consisting of a Type 1 bishop crook base supporting an original 5th Avenue twin design that first appeared in 1896. The good news is that the latter two are still alive and illuminating. But the inevitable, it seems, has claimed the one on the corner.

LEFT: I got a great shot of it in October 2000, when I used a film camera and compression for the web techniques were still in the stone age. I compressed it down to 10K because most people were still using 56K modems then. I do have the original print, and can rescan, but I’m lazy that way. 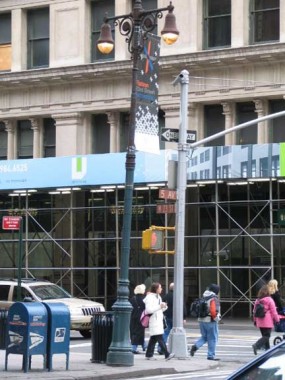 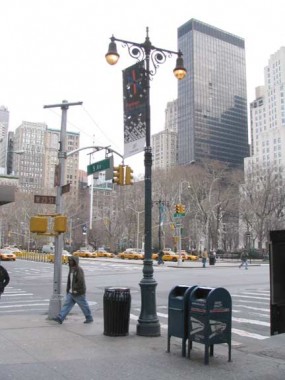 In January 2008, the post was still there, and its incandescent bulbs were aglow, but as you can see, it was listing a bit to the north. On the photo right, you can see its Type 24M Twin partner on the traffic island, which has since been turned into a pedestrian mall by the DOT. 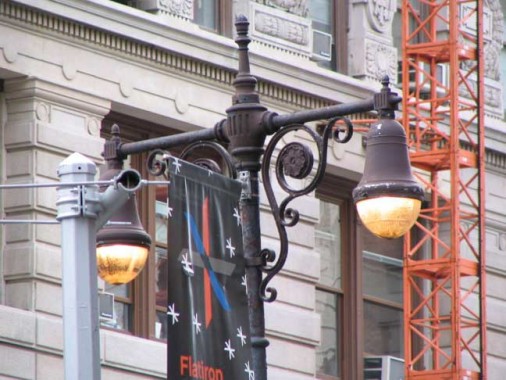 Lest anyone think I’m an obsessive, but let’s face it, on lampposts I am, but when I was a kid I used to divide things up by gender, even things that didn’t have gender at all. (The Romance languages do it, don’t they?) For example, in my imagination, every letter of the alphabet was male,except f, p, s and y. And, as far as numerical digits went, they were all guys, except 2 and 4. Those two were female. (Even numbers get along better with other numbers, don’t they?)

I did the same thing with lampposts. In the 1960s, when I was little, there were still a number of cast-iron posts hanging around, and I thought every last one of them was female, while the streamlined octa-poles were all male. That dichotomy, though, was somewhat easy to explain. The castirons were … rounded, and included extra decoration, while the octa-poles were long, tall and functional. The Twins looked especially feminine to me. 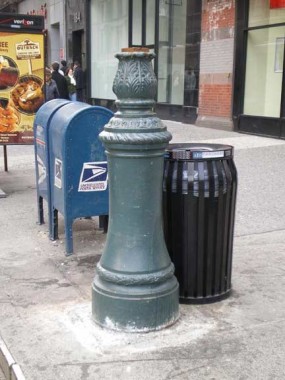 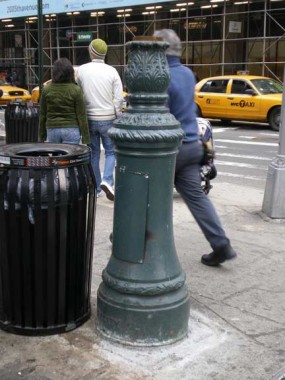 Isn’t that one of the saddest things you’ll ever see? By the spring, the post had not only been demasted, it’d been de-shafted, with only the base remaining. By summer’s end, there was a hole in the sidewalk with a square octa-pole base. I haven’t been there of late, but I’d have to think the DOT has a standard-issue straight shaft octa-pole in mind for the corner. The agency has been ridding 5th Avenue of its distinctive posts for years now.

The starship was the “Intrepid” and it was wiped out in “The Immunity Syndrome” by a giant flying space amoeba.