Whenever I find myself in the Ear Inn, 326 Spring Street between Greenwich and Washington, it always seems to be a crystal clear but blustery day and that’s just as well, since this is a comforting oasis amid the rapidly-changing west end of Soho. This area has been targeted by developers and huge residential towers have been sprouting in an area formerly given over to light industry, stevedoring and bars patronized by longshoremen and sailors, which is what the Ear is and has always been since about 1816, when the building was constructed and the Hudson River could be heard lapping when the door opened. 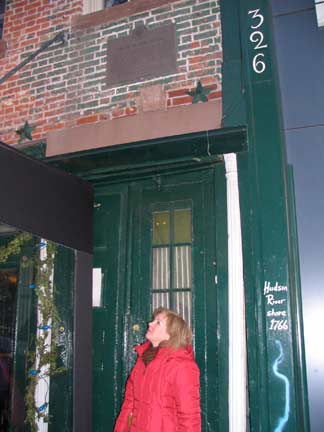 Vicki is looking at one of the historic plaques that are mounted on the tavern’s exterior. On the right, you can see a painted marker showing the location of the Hudson River in 1766, a few decades before the townhouse containing the Ear Inn was built; however, the river came almost all the way to the side of the building when it was first constructed. Gradual landfilling has extended Manhattan Island westward since then. 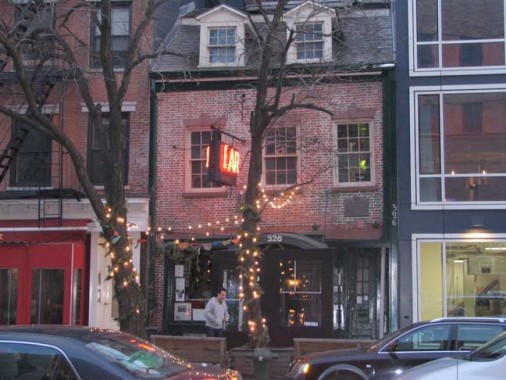 As with so many of my favorite touchstones, the Ear Inn is in a neighborhood where I formerly worked. In the summer of 1992 I was employed at an outfit called ModKomp on Greenwich Street, located in one of the warehouse buildings. I accessed it via the freight landing. ModKomp was a book publisher, but was hardly state of the art. The place was filled with the bones of the printing dinosaurs of the previous photo-lettering era.

The owner, Henry Kuhn, was one of the nicest guys I’ve ever been employed for and I hope he is well these days. When I landed a job with the World’s Largest Direct Mail Operation I contemplated moving to Port Washington, where the company is located, and he drove me all the way out there one rainy Sunday. When the apartment I was looking at turned out to be an oversized rec room, I demurred. That was the last I saw of Henry and I hope he has updated his equipment at least to the 20th Century. 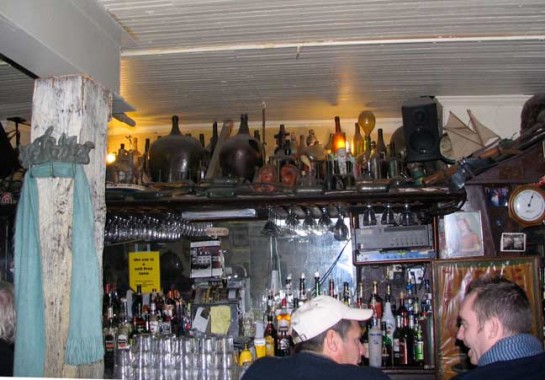 The hand-blown whiskey and wine jugs you see above the Ear bar were found in the basement; some go back all the way to the mid-1830s. The Ear Inn is located in a house built by tobacco trader James Brown, who, according to legend was the black man pictured in Emanuel Leutze’s picture of Washington Crossing the Delaware. By the 1850s the place was a brewery in which drinks were served to local stevedores and dock workers; it more or less filled that function for the next 150 years and counting.

In the 1890s Irish immigrant Thomas Cloke purchased 324 and 326 Spring Street and set up a liquor distributorship. Cloke and his brother Patrick bottled corn whisky in the basement and brewed beer in the back yard. He also set up a public house where food and dsrink was served to passengers and crew of ships docking nearby on the Hudson River. Cloke’s sign hung above 326 Spring for nearly four decades.

When the 18th Amendment was passed, outlawing the sale of liquor in 1919, Cloke leased the business to a John Rolandi, who ostensibly ran the place as a restaurant, with a speakeasy in the back room behind a curtain. When the Holland Tunnel was built in the mid-1920s, 326 Spring did a handsome trade serving lunch, and other ingestibles, to construction workers. 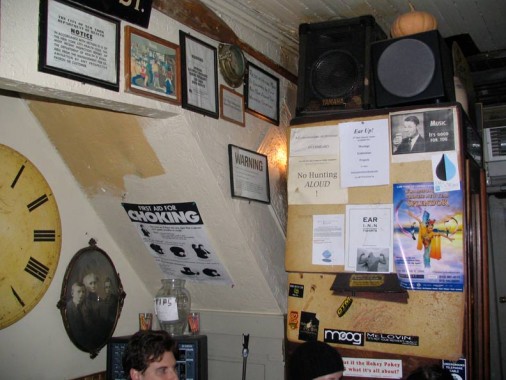 Rolandi purchased 326 Spring from Cloke’s daughter in the mid-1930s and, in turn, sold it to Ethel Nussdorf; Nussdorf’s Bar and Grill served longshoremen mainly in the early morning hours, after their shifts had come to and end. The upstairs, divided into small rooms, became a brothel.

By the 1970s, shipping was beginning to desert the area, which was becoming a wasteland; deferred maintenance caused the West Side Highway, built in the mid-1930s, to collapse. It was subsequently condemned and torn down in 1978. Spring Street and surrounding environs became a bastion for the homeless and prostitutes, with the few legitimate businesses being waste-sorting plants. Despite it all 326 Spring was still hanging on, barely, as a waterfront bar. By then it was owned by a Harry Jacobs and longtime barman Joe Romano had been there for fifty years. A Columbia University student, Rip Hayman, rented an upstairs room for $100 a month. Jacobs sold 326 Spring to Hayman in 1977, and he went on to revitalize the bar and built it into the historic, yet cozy and familiar, Ear Inn that exists today. 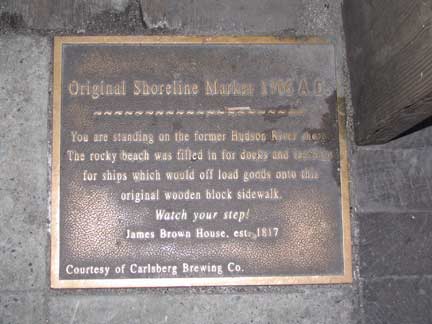 The neon sign dates to the 1940s; in the 1970s, Hayman, rather than deal with the red tape required by the Landmarks Preservation Commission to alter the exterior, painted out half the “b” and presto, the Ear.

The story of Heyman’s revitalization of the Ear — and an arduous one it was — can be found in Andrew Coe’s excellent Ear Inn Virons: History of the New York City Landmark–James Brown House, Odyssey Publications 2002. There are some amazing photos of the area, past and present, as well as views from inside the Ear, including areas not open to the public, and stories about the colorful artists and barmen/maids who have been employed there over the years.

WOW, what a great memory you gave me. That bar was my home base for many years, I have many fond recollections of my lunch hours spent there with the guys from the printing and paper industries.One of the regular patrons, Frank Dowd made the Ear Inn his home base and started the golf outings and the racket ball tournaments.
I’m sending him this site
Thanks