Just got a special ForgottenAlert from FFan David Sanders: I was returning from upstate NY today and got off the PATH train at 33rd Street, heading to the N train…at the top of the stairs there were two large vertical posters whose ads had been removed, and there were 4 small posters, two in the middle of each board, revealed when the current ads were taken off. They are posters for an anti-nuclear concert in January 1980. Not all that long ago but still fun to find, especially if they have been covered up all these years. 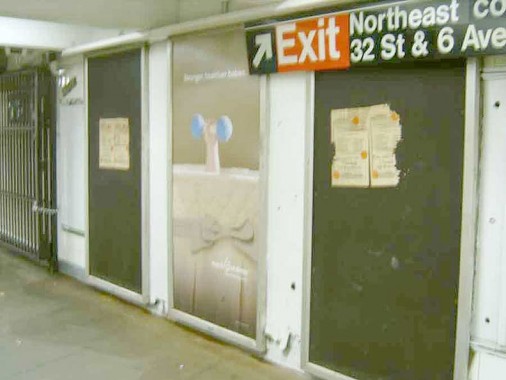 Here’s the wall itself. (The guy who makes a digital camera that will provide a sharp picture indoors or at night without a flash will be very, very wealthy). 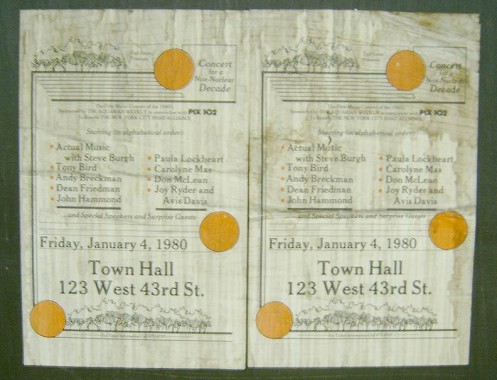 Here’s the poster itself. Town Hall is still there and going strong. The Concert For a Non-Nuclear Decade was held Fri. 1/4/80, about 29 years ago at this writing. This was an era in which, despite several hostile states such as the Soviet Union and China possessing nuclear weapons aimed at the US mainland, a great many pop stars and politicians believed that if we gave up ours, they’d give up theirs. Thus, a series of marches and concerts such as the 1979 “No Nukes” extravaganza at Madison Square Garden. 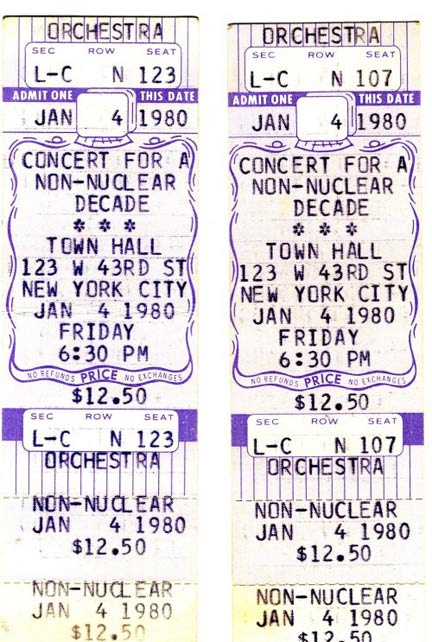 Who’s on the bill? The most famous name is that of Don McLean, whose landmark 1971 #1 double-sided single, “American Pie,” limned the pop music and political scenes from the death of Buddy Holly in 1959 through the murder by the Hell’s Angels of a concertgoer at an Altamont, CA Rolling Stones concert.

Steve Burgh (1950-2005) was a record producer and guitarist; most notably, he played on Billy Joel’s 1976 albumThe Stranger. Tony Bird is a Malawi-born singer-songwriter. Andy Breckman is a standup comic and WFMU talk show host who has written for Saturday Night Live and is the creator of the TV series Monk. He has famously had a long-running feud with Don McLean. Dean Friedman is a veteran singer-songwriter whose slice-of-life single “Ariel” became a surprise Top 30 hit in the spring of 1977. Blues singer /guitarist John (Paul) Hammond is the son of legendary producer John (Henry) Hammond. Paula Lockhart is a jazz and blues singer still making appearances in the NYC area. Carolyne Mas is a singer-songwriter who after her 1979 hit 45 “Stillsane” has continued to write, record and tour and has run a Florida animal shelter. Joy Ryder & Avis Davis were a female-male punk rock duo who had just released the single “No More Nukes.” Joy (Denise Whalen) has continued to perform in a variety of genres.

ForgottenFan Ed Fenning: The concert poster … brought back memories – I was living in Boston in 1980, but did manage to see Tony Bird – many of his songs were anti-apartheid, and his vocals were loud, projected well throughout the hall and had a raspy quality; this put some people off his singing, but for me anyway, made his songs more dramatic. I was working in a record store when his first albums came out.

I was also lucky enough to see John Hammond Jr. and Paula Lockhart (I think I may have seen her in a club in Nantucket of all places. Paula Lockhart had a wonderful deep dark bluesy voice that just got down into you – like a slow guitar solo where all the notes are drawn out each one wraps around you. John Hammond I saw during the winter of ’71-’72 at the Gaslight I think. He was captured by the rhythms as he sang – his voice somewhere between a baritone and a tenor, enthusiastically dancing through the lyrics, and his whole body moving to and fro in time with the rhythms…. Thanks for the background about the other performers too.

Went looking for these today. Didn’t find them but found some anti-apartheid posters advertising a march on Herald Square on May 1, 1976. Go into the PATH/Subway entrance on the NE corner of 6th and 32nd, and they are at the bottom of that first set of stairs.