It may have come across before but I enjoy New York City’s elevated trains. Not every American city has them anymore, or has them to the extent that New York does. Boston tore down its Orange Line el over Washington Street in the late 1980s, and the last remnant of the Green Line el over Causeway Street vanished as part of the city’s Big Dig project that also eliminated the elevated highway that cut across the downtown area there. Philly has els on Market Street and Frankford Avenue, but that’s about it. There are the famed Chicago els, but except in the Loop, they have their own rights of way between streets, and you can’t walk under them.

ForgottenFan Jay Huhman: This is not completely true. Chicago’s Lake Street Line runs over Lake Street for most of its run to Oak Park, Illinois. It’s my daily morning commute.

Most of the other Els were built in alleys outside the Loop. Sometimes the right-of-way is still in use as an alley, as in the Green Line running south of the Loop between Wabash and State Streets. Other times the CTA uses the space for storage or rents it out as parking spaces, as along the Howard (Red) Line between Armitage and Wilson.

NYC has also eliminated its els — Manhattan’s four trunk lines from the 1880s-1950s, the 2nd, 3rd, 6th and 9th Avenue els — are all gone and Manhattan has only the northern end of the 7th Avenue Line (the 1 train) running over Broadway and 10th Avenue in Inwood. The Bronx has mostly kept its great elevateds — Westchester Avenue is the only street in NYC that has two separate elevated lines running on it in 2 different sections. There’s the lengthy section of the #2 and #5, which run on 7th Avenue and Lexington in Manhattan, which shadows White Plains Road most of its length. Of course Brooklyn, though it lost its Myrtle Avenue line in 1969, still has lengthy routes running over New Utrecht and Livonia Avenues and Broadway. And, there’s Roosevelt Avenue in Queens. 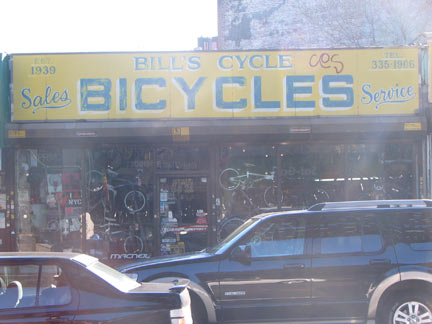 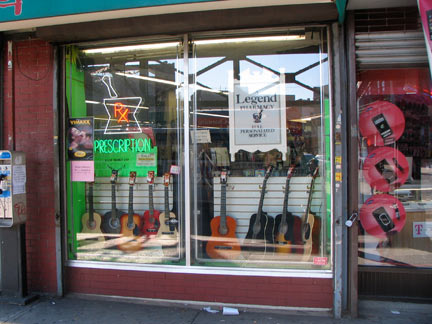 Why am I fascinated with els? More than any other area in NYC, it seems they preserve things that have been there for decades. The els themselves, the ironwork, the rails, are more or less what they were 90 years ago, when they were built (most outer-borough els went up between 1915 and 1920; Roosevelt Avenue’s el was built in sections between 1914 and 1917. Roosevelt Avenue itself — named for Teddy — was constructed under the el concurrently with the train (in eastern Flushing, when Roosevelt Avenue emerges from the el’s shadow, it took the route of an older street, Amity). Sometimes you will find older styles of lampposts under an el, or an overlooked sign that limns a long-vanished bus route. On Roosevelt between 61st Street and Broadway, I found a group of hand-painted signs that the sun, which doesn’t get under here very much, can’t bleach out.

Bill’s Cycles is a beautifully rendered blue and white hand-lettered sign, with the added script “Sales” and “Service” on either side. In the window of the Legion drugstore is a selection of guitars for sale. Music has charms that can soothe the savage breast, or perhaps a feverish one. 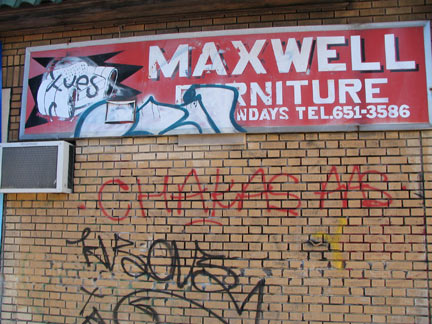 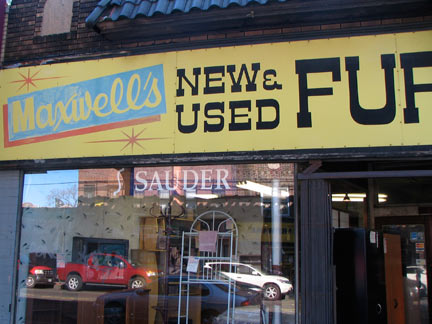 Maxwell’s Furniture has not one but two handpainted signs. The one on the left has been repainted, it seems, but the original featured Franklin (one of the fonts I use for FNY) as well as a nifty drop shadow. The main sign on the avenue uses script plus a boxy-serifed style usually used for Western themes (though I don’t think the style originated in the West). 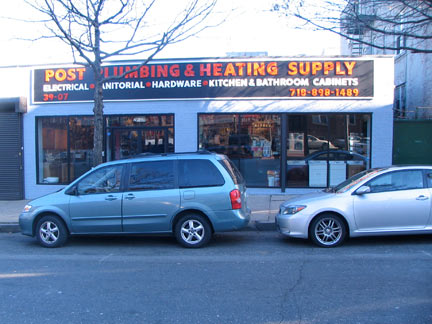 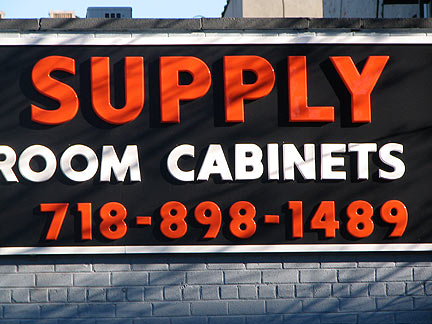 Forgive the shadows — this was December and even one one of the rare sunny days the sun angle is harsh. This is a plumbing supplies store sign on a side street with a simple design featuring plastic letters in black, white and orange. 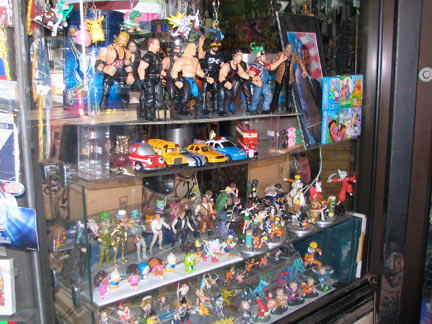 I used to collect Matchbox cars (I have only a rusted double decker London red bus from that old collection). I have to review coin and stamp ads as part of my ‘real’ job and I’m glad I didn’t get into the numismatic or philatelic habit since I’d have been an obsessive completist. KT Beanie House has a wide range of collectibles, judging from the window display. The figures on the top row are all pro wrestlers. 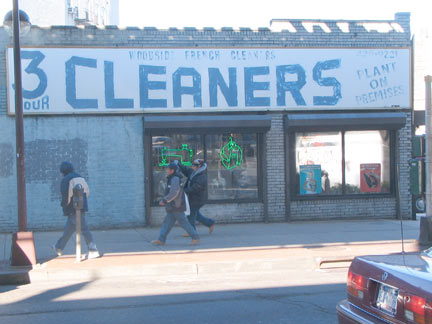 3 Hour Cleaners. Squint and you can make out “Woodside French cleaners” on the top row. There’s also some nifty green neon signs in the window. 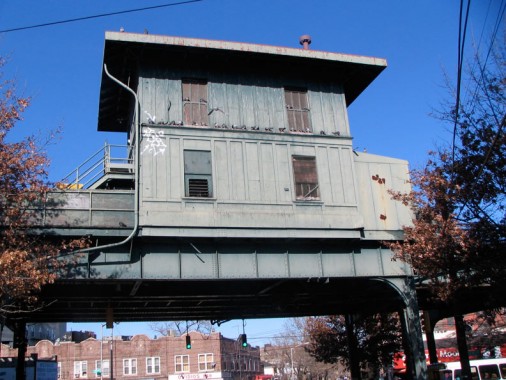 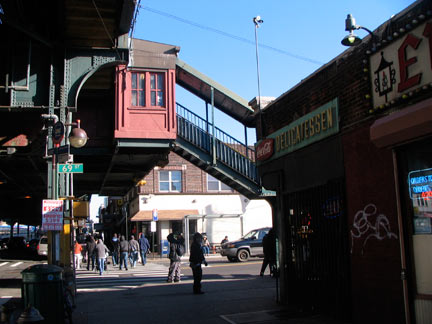 These sheds can be found close to station platforms on most, if not all, of NYC’e el lines. What are they for, specifically? I was drawn by the row of pigeons above the bottom two windows.

The staircase at the 69th (Fisk Avenue)platform is likely the original; of course the treads have been replaced since 1917. The “new gumball” light appeared in the 1990s.

ForgottenFan Michael Carroll: The “sheds” you are inquiring about on the Roosevelt ave El are Signal Towers. Most are abandoned but still contain relay rooms and compressor systems to operate the signal’s and switches in the area. The one in the picture is called the “Fisk ave. Interlocking.” It used to be manned just during rush hours since the switches there were rarely used except to re-route trains in an emergency. 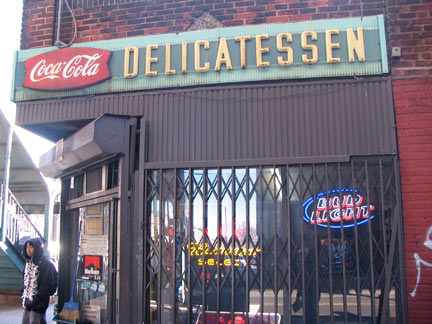 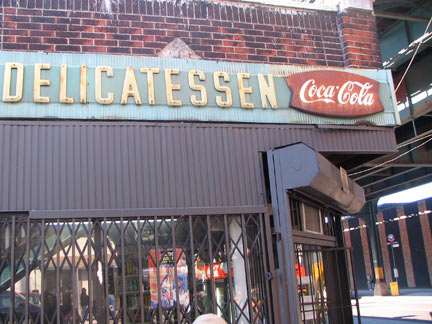 If a sign style was ever emblematic of NYC’s grocery stores, newsstands and delicatessens from say the 1940s through the 1970s, the green background with gold block lettering, seen here, is it. This scheme appeared on countless such signs around town but yet, I’m still amazed when one pops up someplace; I had no idea there was one here on 69th and Roosevelt, which I had been riding over on the el for about, …. years.

ForgottenFan Don Brunjes: The Roosevelt Avenue Deli sign you talk about is actually Circa 1960s. You can tell by the “Fishtail”, also known as the “Arciform” Coke logo. Came out in late ’59 and was used by the brand for a solid 10 years. The yellow tin letters on green background were offered to shopkeepers by local Coca-Cola bottling companies. The letters were attached the green portion of the sign to spell out whatever the vendor wanted and are referred to as the “privilege panel”. You are correct when you say circa 1940s to 70s because Coke offered these signs as early as the 40s with the round “button” coke signs attached. 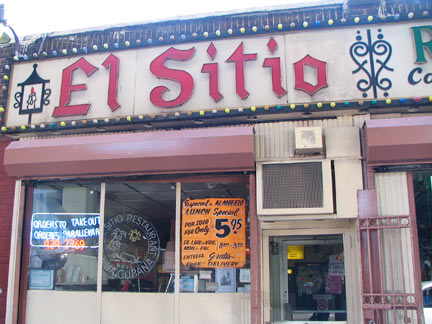 El Sitio Cuban restaurant with veneralble plastic lettering. On Roosevelt Avenue there are a myriad of Hispanic populations that compete, sort of, with Indian and Bangladeshi culture from 69th east to Baxter Avenue. 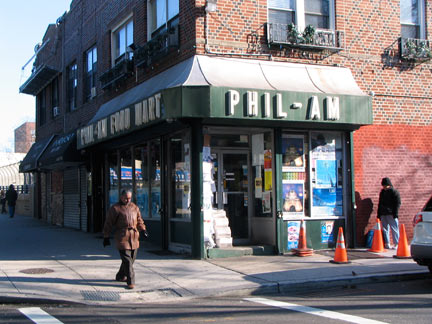 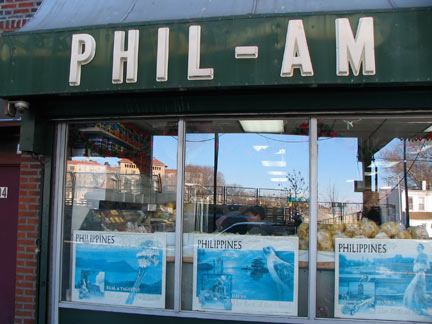 Phil-Am? Can’t leave out the Filipino Americans. This is just west of the BQE. 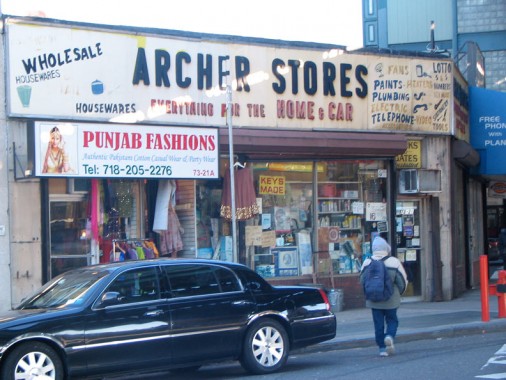 Archer Stores has likely held the space here at Roosevelt and Broadway (I am preparing a Broadway in Queens page) for several decades. Some time ago it began to share space with Punjab Fashions. The sign (plastic or wood letters?) has held up amazingly well.