ForgottenFan Dennis Harper recently found one of those rarest of birds in the NYC street paving canon — a red bricked street with a median shown by alternating bricks in white! I had only seen this treatment done on a couple of streets in Jamaica, Queens, and, though I have made a number of visits to Bedford Park in the Bronx over the years, Oliver Place, between Decatur and Webster Avenues a couple of blocks south of Bedford Park Boulevard had eluded me. Just one of those things you find in NYC by turning a corner that can provoke wonder. Or at least a slight feeling of satisfaction. 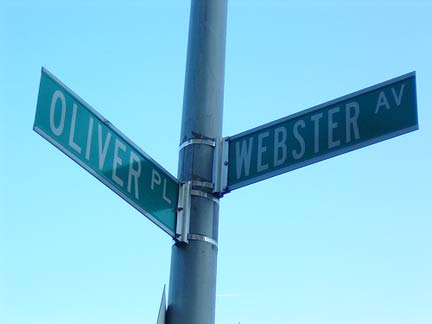 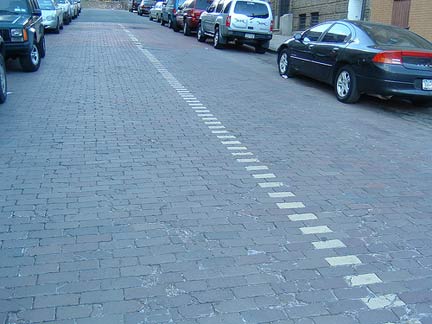 Actually it’s not that hard to see why I had missed Oliver Place, it’s just a block long and it’s easy to get lost in the shuffle in Bedford Park, which has a number of one-block streets. I’m doing a survey now called Places Matter which deals with one-block long streets and their quirks, though, and I’d’ve eventually arrived here. Looking at Dennis Harper’s photos, though, I would have inhaled a bit if I had happened on it by accident, since this variety of street paving is nearly extinct in NYC. 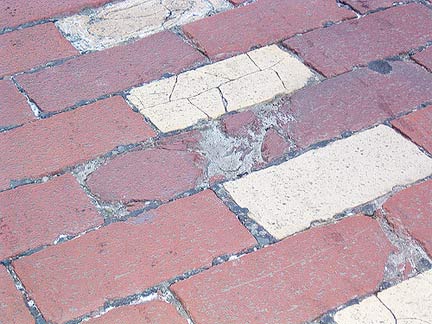 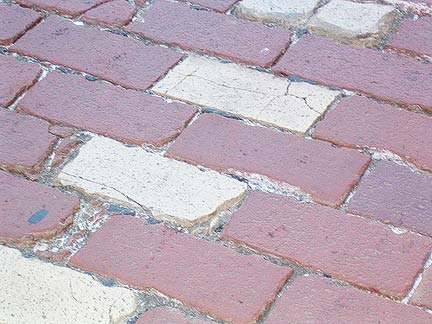 The presence of the white bricks down the middle of the street completes the scene; this is the only such usage in NYC I have found thus far. In Jamaica (link above) there are white bricks used to designate crosswalks. 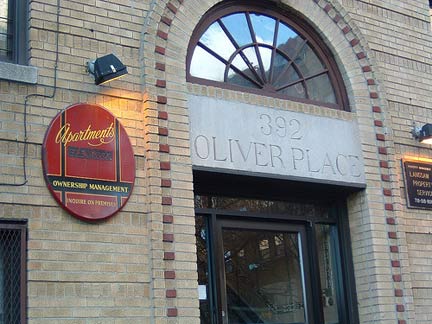 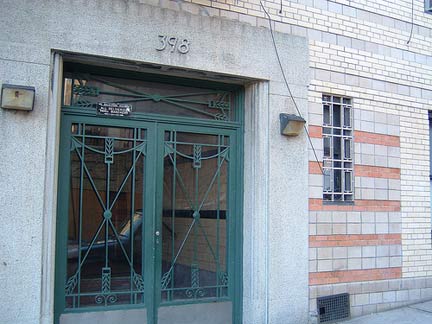 From the looks of things, Oliver Place has some nifty Moderne-ish buildings as well. Note the street numbering in the 300s, though Oliver only runs one block. In Bedford park, all streets, long and short, are numbered according to their distance from Jerome Avenue, which is the Bronx’ East-West divider. In other words, every block between Decatur and Webster is numbered in the 300s.

Just when you think you’ve seen everything in NYC…you ain’t seen nuthin’.

LAMPPOSTS BY THE LETTER: Types A through G

My grandmother lived at 392. This brings back so many memories.

My grandmother lived there too. She lived 1 flight up from street apartments facing Oliver Pl.

Oliver Place was 2 blocks should be still.

Decatur and Marion is the other block

Oliver place definitely runs two blocks from Webster up to Marion Ave…my uncle lived on the steep hilly part between Decatur and Marion in the 1960’s.

The section of Oliver Place between Decatur and Marion was never open to vehicular traffic. It was – and still is, I believe – mostly a vacant lot with a narrow sidewalk along one side. I lived in 398 from 1969 to 1978. That building is something of a family tradition, at various times between the late 1930s and late 1970s having housed my grandfather, his two sisters, my mother, my father, and me. I have fond memories of my years there, despite the fact that the Edison Studio was an abandoned eyesore, and that lot at the top of the street was filled with trash. The Third Ave. El ran just outside our 4th floor apartment windows, at the same height. On its last day of operation, I remember waving to the riders who had gathered for one last celebratory trip.

Hey Ronnie I lived at 398 Oliver pl for 27 years from 1982 til 2009 also on the 4th floor. If you faced webster you had to be either 4b 4c front of the elevator or 4d or 4e i was 4f there were several longtime tenants there. connie 6th floor virginia matic she was 4b ann in 4d

Hi Barbara! We lived in apt. 4E. I still think that apartment had a great layout. I’ve seen some recent photos of apartments for sale in the building, and I’m happy to see how nicely they’ve been updated. I’ve been working on my family tree recently, and I found a couple of early photos of the Edison Studios and another photo of the intersection of Oliver Place and Decatur in 1938.

I would love to see the old pics of the block my email is barbnearl@gmail.com

Hi Ronnie:
My wife and I plus our three little kids lived on the 3rd floor of 398 from 1956 to 1960.My brother and his brother in law also lived at 398 during the same time frame. Our apt was at end of hall on Oliver Place side. You brought back great memories.
Jim Farley

We have the same last name, so I’m surprised I do not remember you. Was that your name back then?

Hi Phil, I would love any information you have regarding 390 Oliver Place and landlords/residents that lived there while you were there. Do you have any pictures? If so I would love to see them. Anything would be appreciated.

I live right around the corner from Oliver Place and I searched on Google hoping you’d have written about it. And you did. But you didn’t venture up toward Mount St. Ursula. There is a sidewalk skirting a garbage strewn vacant lot that connects Oliver at Decatur to a short spur of Oliver which meets Marion Avenue. That little spur is one of those places where, if you’re looking west toward the fence around Mt. St. Ursula, feels like it isn’t in NYC. There are copious black-eyed susans growing along the wood-frame house on the north side of the street. On the south side is another large wood-frame house. The road is only half paved and looks like it belongs in some sleepy town far from the city. That aforementioned sidewalk is even a little step-street, albeit one in terrible repair.

Hi all. I am interested in seeing any pictures you may have of Edison Studios and the block itself. Particularly the building which makes the corner of Oliver Place and Decatur Avenue. 2820-22 Decatur Avenue.

Also does anyone have any recollection of the Garden Theatre located on Webster Avenue between 197 & 198th Streets?

The most interesting thing about this location the that here that Edison Studios existed for 15 years or so . This is where the modern film industry got its start. too bad the buildings were torn down.

Melissa, you & Crystal were babies. I remember your family well. I still live in the building. Please tell your mom that Martita says hello.