Though this set was shot in March 2009 it may as well have been done in March 2000, March 1975, March 1950. Except for the storefronts and restaurants nothing changes much in the West Village, and that’s just the way Forgottenphiles like it.

Like its Village brothers West 10th and West 11th, West 12th conforms to the peculiar Greenwich Village street layout, which tilts to the southwest athwart the island’s overall grid. West 10th, 11th and 12th were once called Amos, Hammond, and Troy Streets respectively for local landowners, but were switched in the mid-19th Century for the numbers, which seemed to me to provide no great advantage and I wonder why it was done. This did make for some unusual intersections, as we’ll see further down. 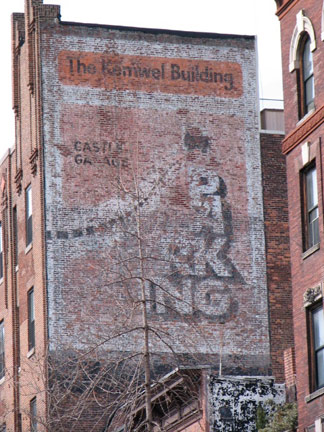 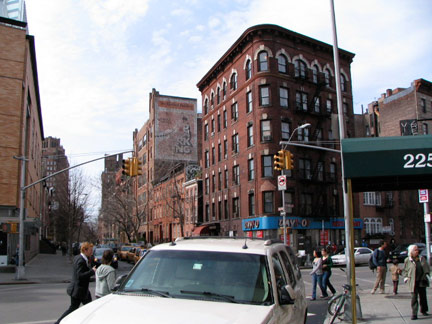 Slouching west on West 12th I spotted this faded, half-gone ad for what was the Castle Garage in what was the Kemwel Building. Kemwel was, and is, a European car rental agency, which originated in NYC as far back as 1908. Castle Garage, and its phone number, were featured on the recently obscured Wellner Motors ad at nearby Jackson Square, now obscured by a condominium. 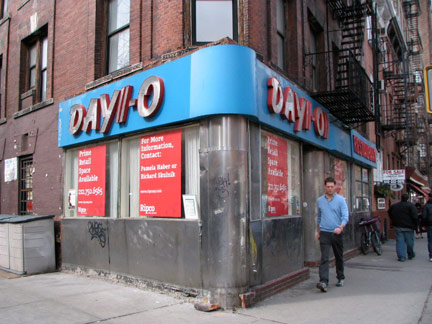 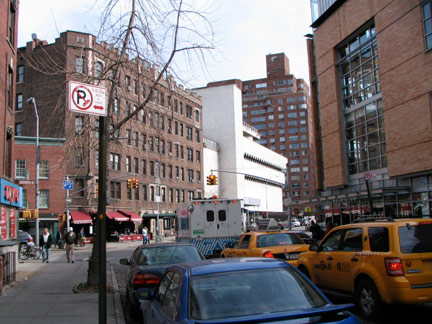 I have said West 12th was virtually unchanged, but change is soon to come in the Greenwich Avenue area. The chromed and neon’d Day-O restaurant, closed since 2007, is for sale and undoubtedly will become something more boring than this. Looking northeast, the St. Vincent Hospital’s O’Toole Medical Services Building (originally the 1964 National Maritime Union of America Building), the white building middle right, will be torn down despite its landmark status; the hospital petitioned for an exception so it could construct a 19-story hospital-residential development. According to renderings in March 2009, the new building will be rather strange.

With the demise of St. Vincent’s in 2010, the O’Toole Building’s future is uncertain. 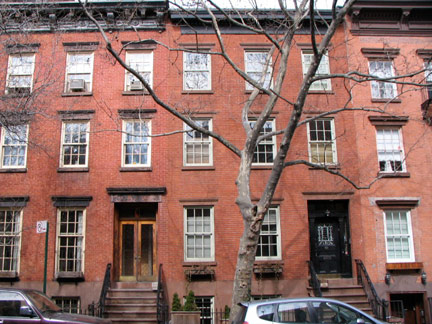 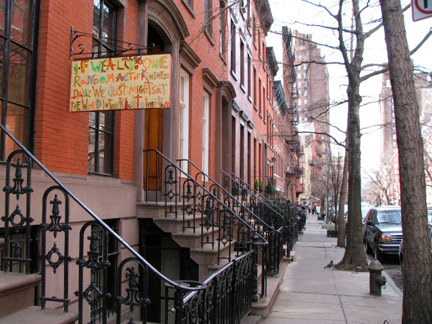 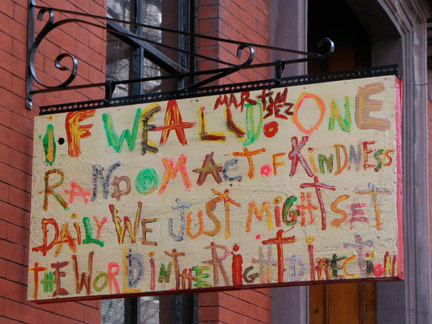 These row houses on the north side of West 12th go back to the mid-1840s, as do many of the buildings on the south side. The other side of the sign says the quote is by Martin Kornfeld, whose home this apparently is. 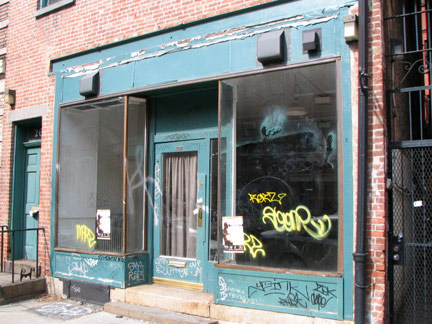 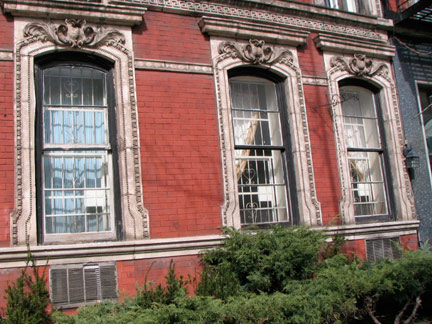 Window treatments between Greenwich Avenue and West 4th. When I see an ex-storefront I always wonder what the store was. 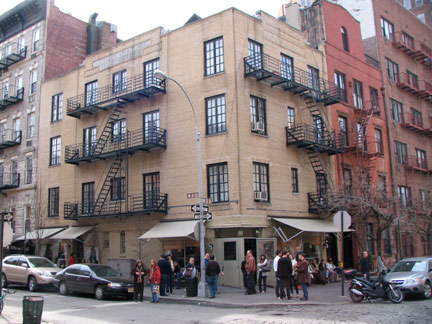 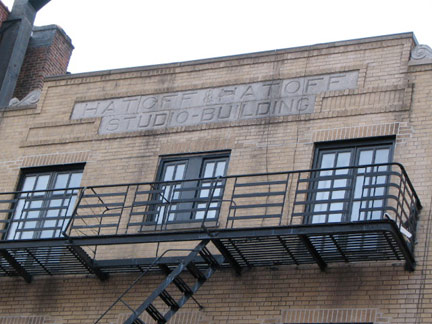 Like its parallel streets, West 12th intersects both Greenwich Avenue and Greenwich Street, as well as West 4th. How did 4th come to intersect 10th, 11th and 12th? It’s another product of the renaming mania that was rampant on the city map in the early to mid-19th Century; West 4th was named for the nearby Orphan Asylum Society which stood on Asylum Street between Bank Street and Troy Street (now West 12th St.) The asylum was demolished in 1833, and soon after, the street was renamed as West 4th Street. Only later were the other streets renamed West 10, 11 and 12 Sts.

You can leave your Hatoff. I’d daresay not many note the inscription at the top of the Moderne-style building at 4th and 12th. I noticed the crowd at the restaurant on the ground floor, but from this distance, I couldn’t see a sign at all. The new trend (though Chumley’s started it during Prohibition) is to deliberately obscure the name of your establishment. That way, only people in the know (who can afford your place) will go there. After getting closer, I finally found the name of the place, Cafe Cluny, etched on the glass next to the front door. 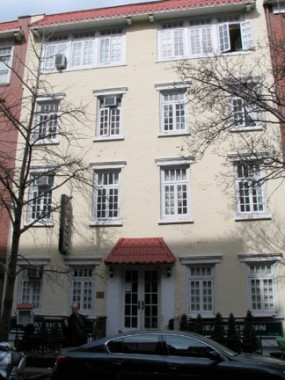 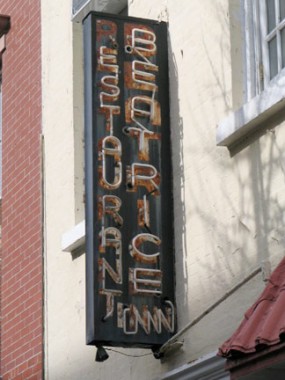 The now-shuttered Beatrice Inn, and its ancient neon sign, was co-owned by Paul Sevigny, the brother of actress Chloë; Sevigny and partners reopened it as an exclusive restaurant-to-the-stars (a la the Waverly Inn) after it had previously been a more democratic (small d) boite between 1955-2005. The building itself is relatively new: 1928. 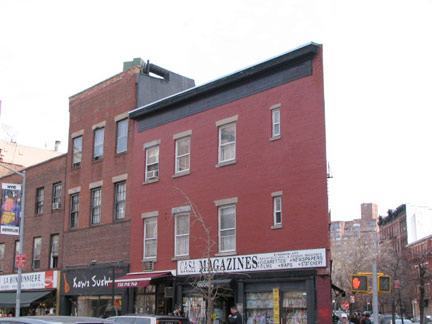 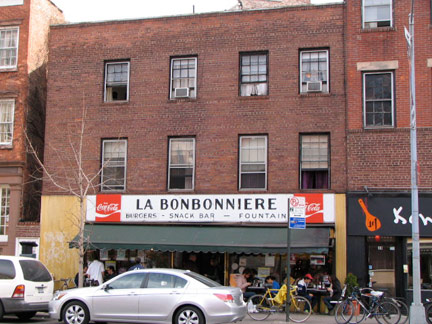 8th Avenue and West 12th meet at a surprisingly sharp angle. which makes for a sharp triangle building at the NE corner. There is a venerable magazine store on the corner, and a couple of doors north on 8th Avenue, a restaurant witha French name serving … burgers. I like the mid-70s Möbius Coke Adds Life! signs. If it’s Kinky Friedman’s kind of place, it’s my kind of place. 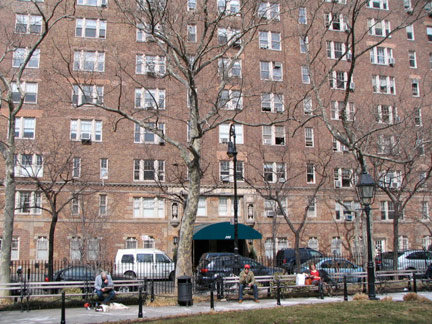 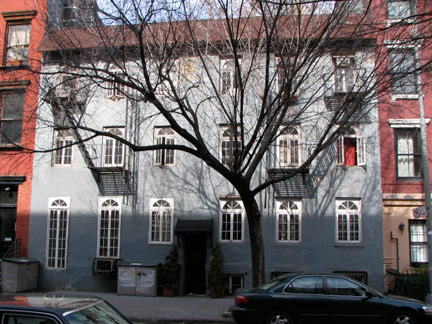 ABOVE: 299 West 12th at Hudson Street, facing Abingdon Square, developed by Leo S. and Alexander Bing. BELOW: 349? West 12th, between Greenwich and Washington.

The Bing & Bing buildings are regarded as among the city’s finest prewar properties. The company, a development and management concern founded in 1906, built hotels and apartments at a time when luxurious in New York was still synonymous with spacious. NYTimes 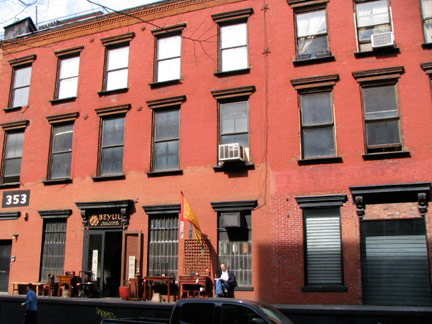 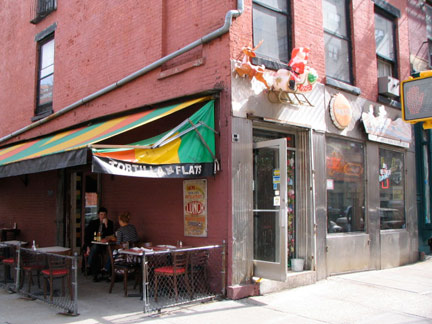 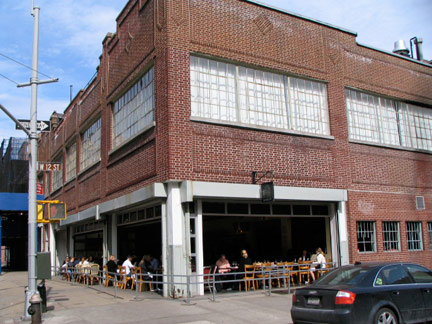 At Washington Street, a couple samples of imaginative reuse: Tortilla Flats appears to be in a former diner, while Barbuto looks like a former garage.

Tortilla Flats … has not really been about the edible but lackluster Tex-Mex food since it opened 24 years ago. But the surprisingly good, sloshy quesadillas are foils for the bracing margaritas and sangrias. The real attraction is the nightly New Year’s Eve party in the frantic bar-dining room, where Christmas lights and confetti fringe flicker from the ceiling. NYTimes

Before DAYO existed, my godfather owned an Italian restaurant called LaMarrionette. My father worked there with my godfather My godmother owned the apt building across the street. I wish someone would document this. I google it and there is no information about it. I am here to tell that it existed. Ask any old timer in the neighborhood. Gina

My former partner owned Foul Play and Wendels on the corner of w 12th and 8th avenue and I lived
at 299 w 12th. Seems like yesterday … what a great area in a great ciry!