With NYC apparently preparing to finish the East River walkway from the Battery all the way to the northern end of the island, and Cy Adler’s “Great Saunter,” a 32-mile walk around the entire island, in the books for 2009, I thought it appropriate to turn to some of the photos that your webmaster shot with ForgottenFan Vicki along the East River walk between the Brooklyn Bridge and 34th Street in November 2007. Oddly enough, this stretch of the walk doesn’t get much ink, certainly less than its Hudson River counterpart — mainly because it’s shrouded under a highway overpass for some of the way. Still, it runs past the South Street Seaport, which some city planners want to re-target away from tourists and more toward rich residents (in Bloomberg’s NYC2009®, waterfronts are only appropriate for the remaining rich). Let’s just say we steered clear of the obvious.

Incidentally, I’m in the Seaport all the time during the warmer months, mainly because I ilke the tuna casserole at one of the food courts, which, amazingly has kept its great views of the river, harbor and bridges open to the public, though I hear changes are afoot. Remember when the Manhattan Mall’s food court (in the old Gimbels’) was on the 7th floor, and you could ogle Greeley Square, the McAlpin Hotel and southern Sixth Avenue through the plate glass windows while clogging your aorta with Philly cheesesteak? The Mall got wise to this, decided that the basement was more appropriate for noshers, and converted the grand food court to offices. I’ve been to the basement Manhattan Mall food court 3 times since the mid-1990s, when they committed this heinous act. 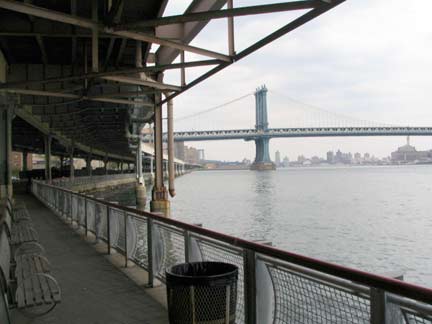 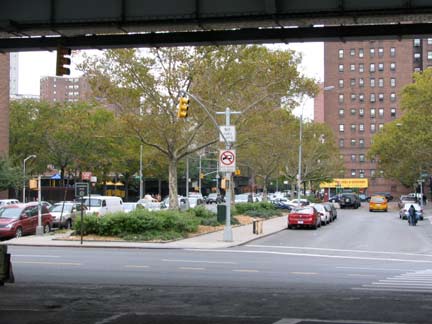 Did I say the stretch under the highway was a little dull? Other than the river and bridge views, it sort of is. Looking to the left will reveal a little history, though. Catherine Street widens for the block between Cherry and South Streets; now known as Catherine Slip, the mall used to be filled with water and boats would “slip” in and dock on either side. As far as I know, NYC is the only one that has “slips” for streets. 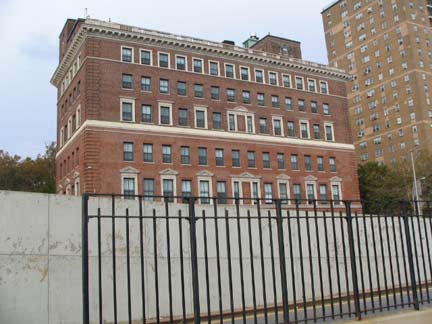 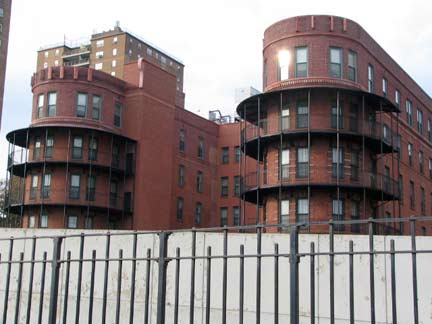 Gouverneur Hospital was constructed, purportedly by McKim, Mead and White, in 1901 and served the lower east side until 1961. A new Gouverneur Hospital opened in 1972 on Madsion Street. The original place has had periods of abandonment but I think it now serves as a drug treatment and rehab center. The distinctive, covered-U shaped verandahs remain in place. Fresh air was a prominent curative method in the 1890s-1900s, but NYC air quickly became too polluted soon after Gouverneur opened for that to work very well. 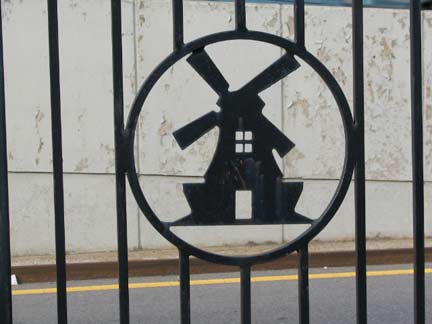 Fences along the East River walk allude to New Netherland; the Dutch occupied Manhattan from about 1625-1664, when the British sailed in and Stuyvesant surrendered it, believeing discretion the better part of valor. 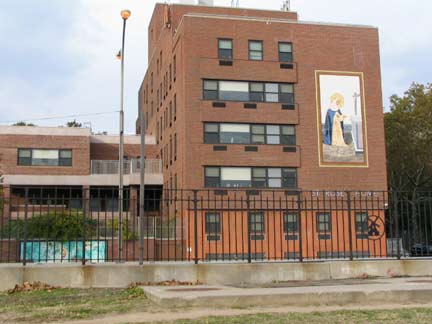 St. Rose’s Home on Jackson and Cherry Streets, in which Dominican nuns provided a hospice for terminally ill patients, closed in March 2009. 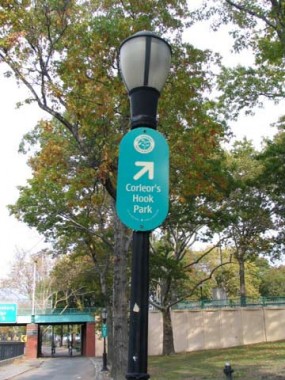 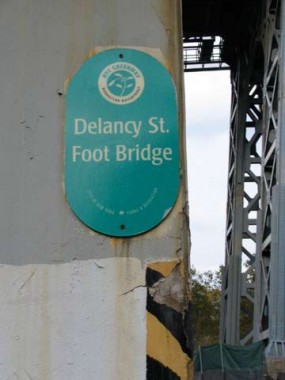 Signage is helpfully provided along the park/bikeway, but spelling isn’t a strong suit. “Corleor’s” should be Corlears’ Hook Park, the name referenceing the sharp bend the island takes from NE to N. Here the East River Drive becomes the Frankin D. Roosevelt Drive. The Dutch Van Corlear family owned land in the area in the New Netherland days. The signmaker shouldn’t feel bad, however, as the family spelt its name different ways too: Curler, Corlaer, etc. Perhaps the signmaker was thinking of Don Vito Corleone. “Delancy,” of course, should be “Delancey” for the New York Chief Justice between 1733-1760, James de Lancey, whose father, Etienne (Stephen) owned just about all the land between the Bowery and the East River in the colonial era. 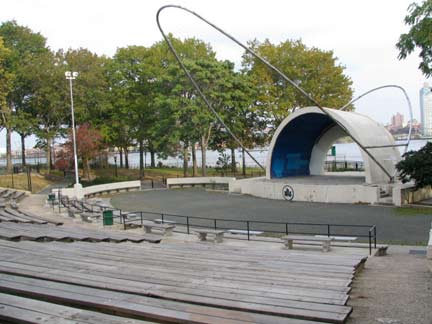 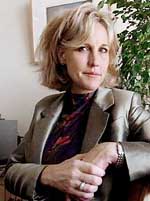 The restoration of the bandshell in East River Park (known as the East River Amphitheatre) was due in large part to the efforts of activist Erin Brockovich; in December 2001, ABC Television provided her with $4 M and 6 days to rebuild the bandshell, which had been in severe disrepair. The project was a success with the aid of pro bono work by Tishman Construction. 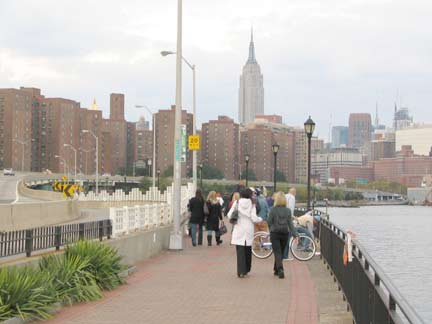 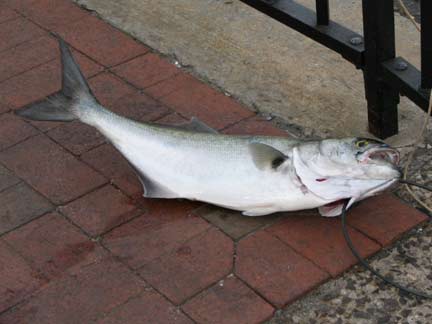 The King of All Buildings comes into full view at a bend near 14th Street, as did a fish named Hamilton. 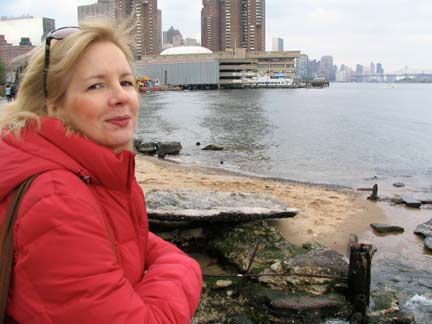 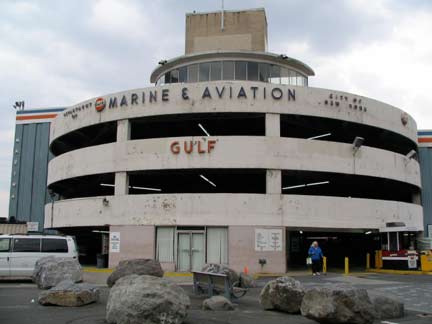 Beauty and the beach. There are scattered beaches, or at least sandy areas, along the East River front, one just south of the Manhattan Bridge and another one, shown here, at 20th Street.

Has there ever been an attractive parking garage? I doubt it and here is more evidence.

PHOTO-LETTERING and the Grand Central area

To Whom It May Concern:
Hello,
I’m attempting to find, either in color, or B.& W., a photo. of a concrete and steel footbridge that in the 1940’s and at the time spanned the East River Drive, from Corlears Hook Park (Jackson St. Park), to the East River promenade. The outer walls, facing both North and Southbound vehicular traffic, had square panels and in each panel was a blue colored windmill. I believe, this bridge is now a green, steel girder footbridge, constructed either in the late 1950’s, or sometime in the 1960’s, replacing the older bridge, which must have deteriorated due to the sea elements and inclement weather. I did see a color photo. of the ‘Windmill’ design footbridge, as aforementioned, a few years back, on the Inter-net, but I never saved it.
Now that I’m interested in the old area, which I lived in, at the time, I can not find such footbridge.
If, you have a photo., or knowledge of a photo., I would appreciate to obtain such photo. of the old footbridge having the beautiful blue, Dutch windmill designs and it was located just North of the old Gouverneur Hospital Building.
Thank you,
Respectfully,
Ralph Lambiase, Sr.
59-Lawrence Avenue
Lynbrook, N.Y., 11563-1933
1 516 887-2697

Your cousin Kathy has that picture taken by her aunts. I know, I’ve seen it.

I’m looking to see if anyone remembers and/or has a photo of a small 2-story wood frame house that was in the east river park just south of the amphitheater. I believe I saw it in 2006 and by mid 2007 it was gone. It was on the land that is currently being used as storage for building materials and machinery in the park about 50 ft south of the amphitheater to the east of the FDR. thanks