“Cadet,” according to The Word Detective, is derived from the Latin “capitellum,” a diminutive of Latin “caput,” meaning “head.” It was later applied to young men entering the military and interstingly, was also condensed to “cad,” a young man who doesn’t dance with the woman he brought to the party. For decades the word also delineated a popular brand of canned dog food. 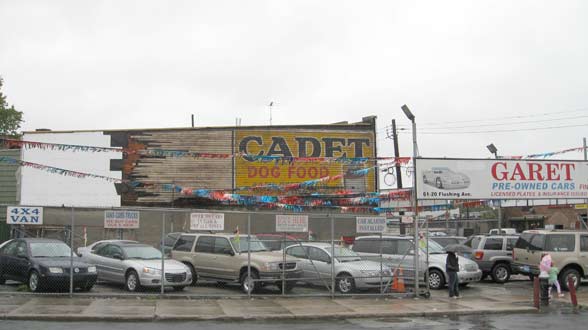 Recently a building being re-sided in Maspeth (Flushing Avenue & Fresh Pond Road) was stripped clean to reveal this vintage Cadet ad(according to the Pet Food Institutethe brand first flourished in the 1930s) , touting the chow featuring “chlorophyllin”, which according to wikipedia, “is the active ingredient in a number of internally-taken preparations intended to reduce odors associated with incontinence, colostomies and similar procedures, as well as body odor in general.” It can still be found in health food stores, for people, not canines.