Having moved to Flushing in 1993 I have witnessed, to my continuing disgust, the demolition of what was formerly Flushing’s great east-west residential thoroughfare, Sanford Avenue; year by year, more and more of its charming 19th and early 20th Century structures falls victim to overdevelopers’ relentless thirst for multi-family dwellings that, since they’re built on the cheap, are ugly as garbage. Even higher-end dwellings these days are built to offend everyone but their owners, who are blind to what they are perpetraing on the landscape. Just a little of old Sanford remains – I tried to capture a couple classic building before they, too, succumb. 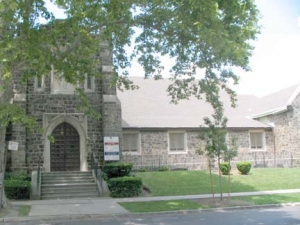 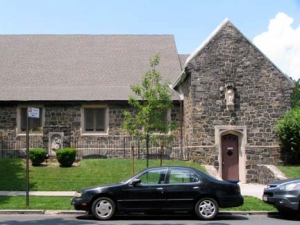 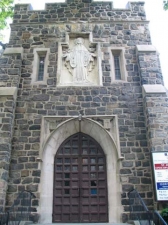 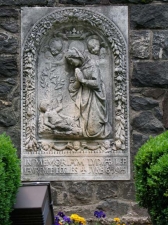 St. John’s Episcopal Church, Sanford Avenue between 149th Place and 150th Street. The church was founded in 1894 as a parochial mission of St. George’s Church on Main Street, with the construction of the first church on this site completed in 1899. After the first church burned down in a fire in November 1924, the handsome ashlar-walled church seen today was completed in 1926 with stones taken from the Church of Heavenly Rest in Manhattan.

A look at St. John’s front entrance, and a memorial dedicated June 6, 1925 to a Lydia Lee Lawrence Eccles, who was likely the wife of, or was related to, St. John’s first rector, Rev. George W. Eccles. Lydia was a member of the Lawrences, a prominent colonial-era family prominent in Queens landholding and politics. Two private Lawrence family cemeteries remain, one on 20th Road in northern Astoria and another on 216th Street by the railroad tracks in Bayside. 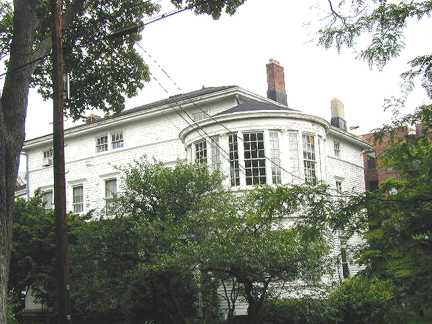 The Eccles family at one time owned the so-called Kabriski Mansion (named for a latterday owner) on Ash Avenue between 147th and 149th Streets.

The mansion, probably built in the late 1840s, dates back to eastern Flushing’s development as a bedroom community as the Long Island Rail Road was extended east. At the time Flushing was still dominated by the horticultural industry and the land was owned mostly by the Samuel Parsons family and by Nathan Sanford, the Chancellor of New York State. Sanford Avenue was developed in the 1830s-1870s with grand mansions and estates, some of which were summer-only. Charles Pearl built the Italianate house on a 5-acre tract facing today’s Sanford Avenue and 149th Street.

Beginning in the 1880s Flushing began to be more greatly populated, and by the 1910s the mansionís then-owner, the Reverend George Eccles, sold off much of the 5-acre property and moved the house approximately 150 feet to its present location. The buildings developed on the sold-off property are still there for the most part, giving Ash Avenue an aura rather unlike its surrounding blocks. 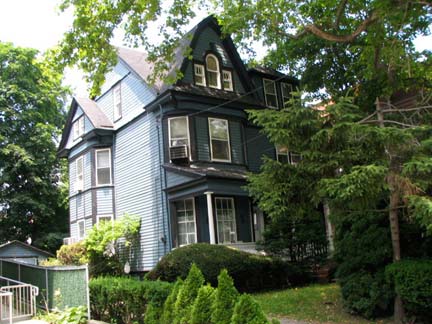 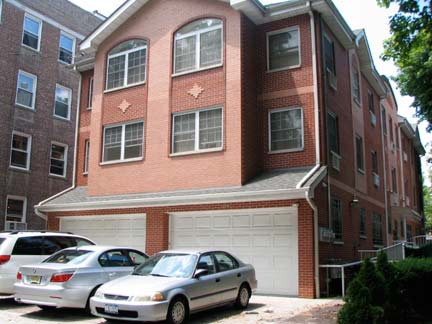 On Sanford Avenue, 1909 meets 2009 as a beautiful blue and white classic with a lush front lawn holds fast against the tide. A similar building was torn down around 2000 to make way for the object at right. Plenty of concrete in front to park your cars and even more garage space on the ground floor! 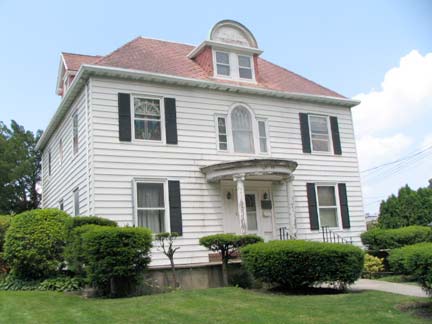 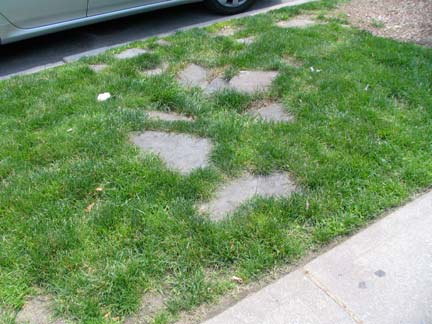 Returning to St. John’s, the parish house is on the corner of Sanford and 150th Street. Notice the bluestone pavement from the curb to the front walk. This sort of thing dates back to the days when the street was not paved and dirt and mud was shaken off on the way to the house. Some streets in eastern Flushing still have a stone that carriage passengers alit on so their shoes would not touch the mud; it’s likely present-day residents have no idea why it is there. 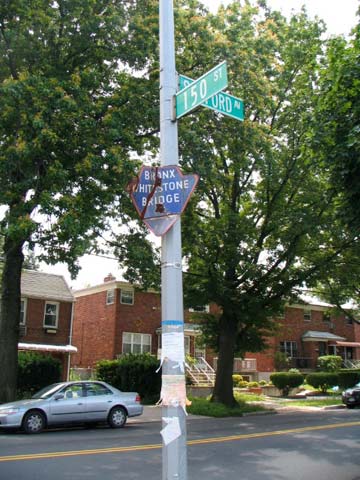 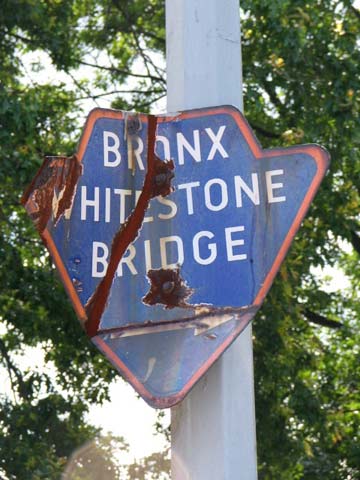 A battered arrowhead sign at 150th is a reminder of the days when this was a major conduit to the Bronx-Whitestone Bridge. It can still be so employed today. As a rule, arrowheads pointed to bridges, while bullet (round) signs pointed to tunnels. 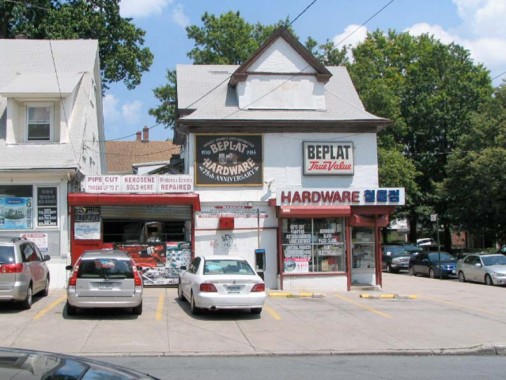 The Beplat Hardware sign at 150th and Roosevelt indicates its 75th anniversary sign from its founding in 1910 to 1985. It has come under new ownership since, but there has been a hardware store here for 99 years and counting as of 2009. 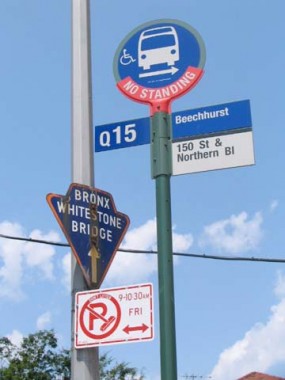 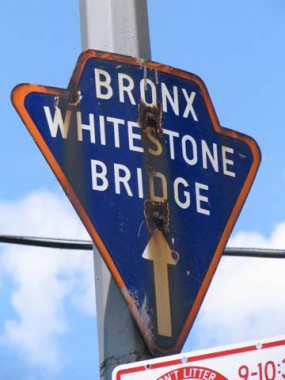 Meanwhile, a second arrowhead has survived on 150th just north of Northern Boulevard.

Show me photos of Sanford Ave and Union St in Flushing!!!!

How would I go about finding out who owned hotels,like The Sanford in Flushing, in 1928?

I was just trying to figure that out myself. Both my family and my grandparents lived in the building since the 1940’s

Except for 2 years in the army, most of it in Korea, I lived at 13301 Sanford Ave. at Frame Place from 1951 to 1957, which is one block west of Main St. Nothing had changed in my opinion while I had been away; Sanford Ave. was still a quiet, 2-way street. If you went one more block west, you ran into the old 39/40 worlds fair fence. I am now quite surprised to see how nice Sanford Ave. and 150th St. is and was. While there was nothing wrong on my block it sure was a lot different from the 150th area. In January 1957 I went with my best friend to Los Angeles and I have lived in Southern California ever since, having acquired an AA and BS, via the Korean G.I. bill. A few years ago I went to Flushing and College Point along with my daughter and I wouldn’t give a plugged nickle for anyplace even remotely near Main St. Flushing. My block on Sanford is now one way, and the people just keep coming if you go anywhere on Main St. Although a lot of things have changed in College Point (where I had attended PS 129 as a child and watched the Bronx Whitestone bridge going up from my corner) I kind of liked the College Point part. My daughter calls it the vacation from hell. C’est la vie.

Mayer’s baat building company – I grew up in college point.. One feature that I remember fondly is the klinkker built boat – run-abouts- factory.. I believer there were two boat building companies along the shore with boat clubs and club houses as well.. This was an wonderful place to visit as a child..We even had a row boat moored there..
I love to see some photos and information about these facilities. More information —