Snyder Avenue runs from the heart of Flatbush, Flatbush Avenue just south of the Dutch Reformed Church, all the way east to Ralph Avenue. Originally known as Grant Street, it was renamed to honor a prominent Dutch landowning family (as so many of Brooklyn’s streets have been); it wasn’t named for the Brooklyn Dodgers’ cleanup hitter Duke Snider, who spelled his name differently, anyway.

I walked just one block of Snyder Avenue between Flatbush and Bedford recently, and in that one block alone, there are several artifacts of Flatbush’s distant and recent past… 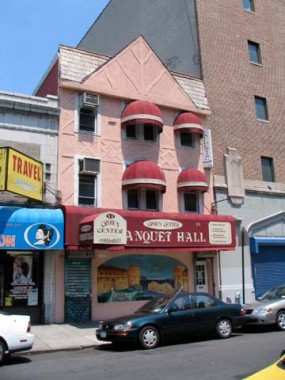 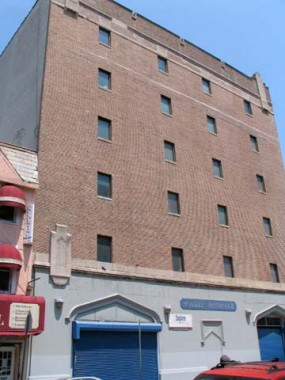 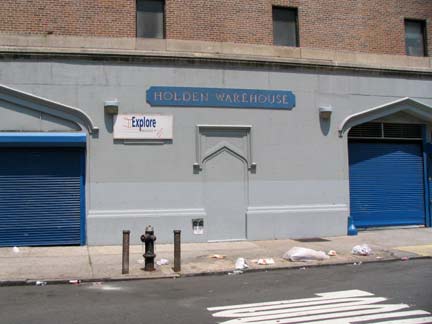 Beginning with two buildings that are pretty much a mystery: the Tudor-styled Crown Center banquet hall, and the fortress-like Holden Warehouse. Anyone know any details on these two structures? 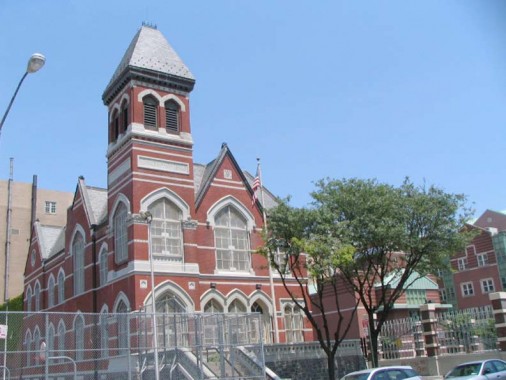 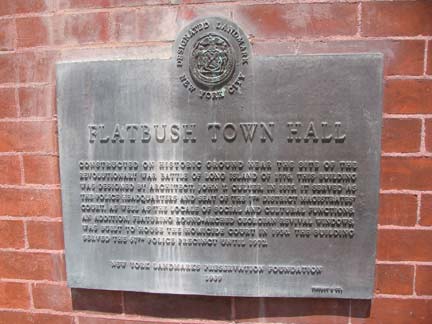 The former Flatbush Town Hall was constructed in 1874-1876 (by architect John Culyer) as a rebuke lof sorts to an annexation attempt of a couple of years earlier by the City of Brooklyn. Flatbush held firm only until 1894, when it was duly absorbed, and six years later, Brooklyn became amalgamated in a very close vote to Greater New York. The building served as the 67th Police Precinct until 1972 and it has also been the seat of the 7th Magistrates Court. It’s a magnificent example of a style known as Ruskinian Gothic, after John Ruskin, a Victorian critic and writer who championed the Gothic style after visiting Europe in the mid-18th century. 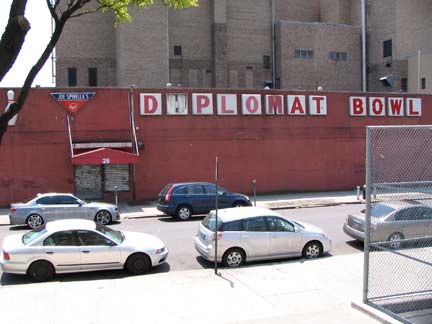 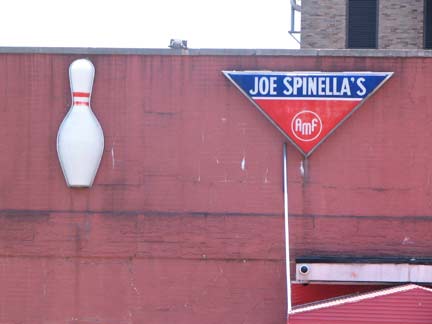 It appears that Joe Spinella’s Diplomat Bowl across the street from the old Town Hall has closed. In the late 1970s I belonged to a bowling league here, and being carless and living in Bay Ridge, bowling here took dedication. Each Tuesday night I rode the B16 bus down Fort Hamilton Parkway, transferred to the B35 at 39th Street, got out at Church and Flatbush Avenues and walked 7 blocks. After awhile, the league switched to Mark Roth’s Rainbow Lanes on Avenue X and Knapp Street. That meant a half-hour ride on the B4 to Nostrand Avenue and Avenue X, and an 8-block walk. Like I said, I was dedicated in those days. Rainbow Lanes has similarly been closed for years. According to Satanslaundromat, Diplomat has been open as recently as 2003. 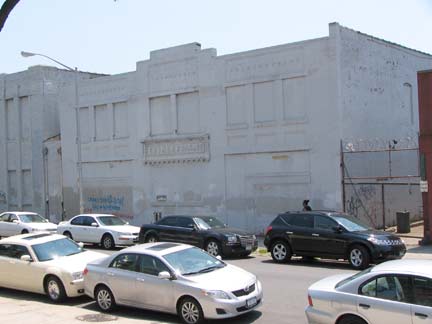 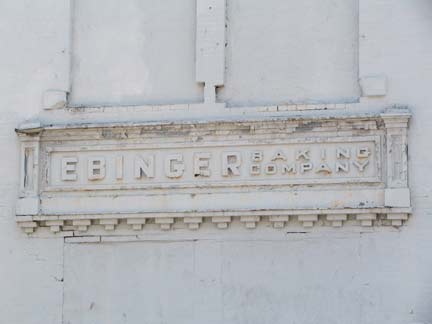 If you’re over 45 or so and lived in Brooklyn all that time you probably remember how scrumptious Ebinger’s cakes were. I remember the company’s green boxes with diagonal black lines, its V-shaped counter on its 86th Street Street, Bay Ridge branch, and its small cakes coated on all sides by rich icing…as well as its butter cookies, drizzled with frosting that was every conceivable color in the rainbow. The seat of Ebinger’s activity lay in the bakery situated between Snyder Avenue and Albemarle Road facing Bedford Avenue. Ebinger’s went the way of all cake in the early 1970s and had a brief revival in the 1980s (the fare just wasn’t the same). 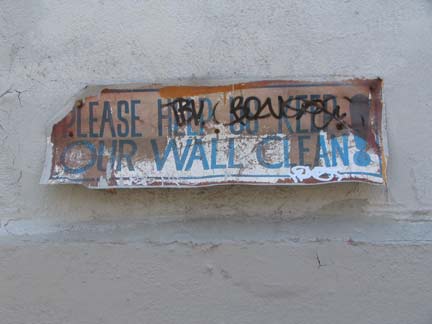 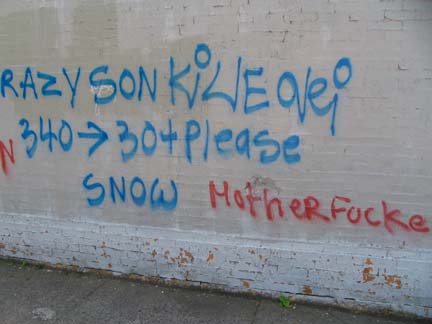 An ancient sign that may go back to the days when this was a bakery has prompted a neighborhood disagreement. Present-day residents are at odds with the “keep our wall clean” dictum.

Snyder Ave (originally Grant St.) was named after John Jacob Snyder 1830-1908, a hardware and furniture merchant. He was known as “Snyder of Flatbush”. His business was located at Snyder & Bedford and other locations in Flatbush.

Hi ,I am the granddaughter of Joe Spinella , Who was the original owner of Diplomat lanes on Snyder Avenue.The bowling alley was passed down from Joe spinella to his two sons Edmund and Joseph Spinella.My father,Edmund Spinella took great pride in keeping the Diplomat lanes in pristine condition. Walking in to the bowling alley was like walking back in time, back in to 1955. Each Alley had individual wooden slats that were polished and replaced on a regular basis. It had powder blue and white chairs with bowling lockers to match. The Diplomat had an old fashion soda fountain with chrome swivel seats. It also had a bar with a large fish tank containing tropical fish.

Hello my dear. I used to work for both Ed at the Diplomat and Joe at the Kenmore. I was only 13 when I started at the Diplomat and subsequently grew up there. I am 65 now and it really was a lifetime away. In any event, I ran into Ed at a Mr. Olympia competition at MSG around 1998. I think about those places (the bowling lanes) often and even had a dream about them a couple of days ago. Are Ed and Joe still around? Best regards, Charlie.

I live near The Diplomat and pass by often wondering what it looks like inside. I love your description Ms. Granddaughter of Joe Spinella. Is it still intact in there? Any chance or re-opening the lanes or finding a new caretaker? if it still looks as you describe I bet Scorsese would be interested in filming a movie there 🙂

I am Ed Spinella, the son of Ed and nephew of Joe Spinella. I worked in the Diplomat Bowl as a youngster from 1970 to 1977. My dad, Ed, passed away in December of 2005 abd is buried at Arlington Cemetery. Joe, will soon be 89 on the 23rd of August 2019, lives in an assisted living home in Davis California. I care for my Uncle Joe from many miles away, as I live in Virginia, and Joe does not have relatives in California. I can be reached at edmund_spinella@hotmail.com should you want to communicate. God Bless!

I knew Ed Spinella. He was friends with the Sullivan family, who my family sold Brennan an Carr to. Your dad was a great man and an American hero. God Bless.
Patrick Carr

hello your comment on the diplomat bowling brings back so many memories of when I bowled from 1965–1975, I worked for your father Ed from 1971-1973. at the food counter at the time he got a guard dog behind the counter, we used to bowl real late every Friday night, I remember, I believe your brother worked the front desk , when he was home from the marines, and he also had Basil, working up front, and Charlie, the black fellow helping on things. Joe your uncle would run the Kenmore lanes.your father was very dedicated, to making sure everthing was running smoothly. please respond, would like to hear from you , Tony Pinto, email– wpinto2@verizon.net phone–484-529-7980

hey Tony, do you happen to have an photos of how the place looked like inside?

Would like to know who owns it now. Are the pinsetters still there? And who’s the realestate agent

Hi,
My name is Chrstina and I have been interested in this bowling alley and restoring it for a very long time. I been trying to find out more information about a realtor or even who owns the establishment now. If you can find out any infomation from either your family or the current owners i would appreciate your feedback. I will continue to do some research myself. Please email me chrissyc25@gmail.com

Holy cow I started bowling at diplomat back around 1990 I believe maybe a year or two earlier not too sure. Lots of memories there I sure miss the people a wide variety of personalities to be sure.

Wow. What great descriptions you all have !!! I loved the post. My Dad went to Tilden High school and lived in 4802 Snyder Avenue (His name was Alan). He often told me about a billiards spot nearby.

My great grandfather was John (Giovanni) Favara. He was a shoemaker in Brooklyn in the 1920s. I believe it was on Snyder Avenue.

If anyone has any info, I’d love to hear it!

I was on the Erasmus bowling team 1960-62, captain 1961-62. At that time team bowled at Diplomat, few years later at Kenmore. Both houses were well taken care of. Joe “Coke” the manager at Kenmore, and senior mechanic John Fortin were good guys, I knew them pretty well (or as much as a kid could). Ed and Joe’s father Joe, Sr. Always bought me a soda when he spotted me. He was always referred to as Mr. Spinella, always wore a suit and tie. Best bit of Spinella family legend was when mob showed up for money. Joe Jr. ex-marine jumped over the counter and chased them out – they never came back. Fond memories of Phil Spinella whom I believe was Joe Sr.’s brother. Great fun to watch old timer bowl, kid around. Spinellas also owned Albermare Bowl, which had about 8 lanes plus pool tables. Tough house to bowl in. Turned into pool and billards only.

Capt. Nicky your description was a walk down memory lane(not to be punny). I to bowled for Erasmus in 1964-67. I remember Ed Spinella with his Marine haircu. t. I also played pool on Albemarle Rd. I bowled on a team with the Kenmore mechanic Joe Gagliardi. Just yesterday a boyhood friend sent me a picture of the 200 scoreboard from the Kenmore Lanes which had me and my brother listed

Stu Rosansky. I use to bowl with your brother Alan. I also think you went to school with my older brother Charlie. The bowling alley was the place to be back then. Whether it was the Diplomat or the Kenmore you had over an hour wait even if you got down there at 1 am in the morning. Great memories

Holden warehouse used to be a elementary school, ps109 I was there for kindergarten thru 2nd grade. Before ps109 moved to a different location

My husband’s grandfather was Phil Spinella, related to Barney Spinella, famous bowlers. Phil owned a bowling alley in Brooklyn too. Do you think we are related? Email address is lspin123@gmail.com

Hi guys,
Im Eds son Joe I worked mostly the weekends I happened to be in Brooklyn and drove by the place Oh boy did it bring back some names: Fanny Nathon,Ken Shaw,Jimmy Fasion,Charlie Murchinson, Millie,Tootsie,Paul Chuckamonga just to name a few. It was a great family of people and my father saw generations grow up in that building (probably enlisted a few along the way.) I can be reached at Jspinella@solarelectric.org

I bowled for Erasmus in 1959. At that time, the team bowled at Freddie Fitzsimmons Lanes. But I spent all my days at Kenmore. Fondly remember Joe Coke, John Fortin, and the Spinellas. Uncle Phil was always especially kind to the kid bowlers.

Hi all. My name is Frank Clemente. I bowled and worked at both the Kenmore and Diplomat between 1969 to 1972. Worked with Jkhn F, Basil,Charlie, Gene, Joe, Neil Boyle and Rosie Belfore. Great time. Friday night at around 1 pm there was still a 2 hour wait to get a lane. Those were the days!!!!