I have always wanted to do a big page on NYC’s hundreds of street clocks, big and small. At first I restricted myself to freestanding sidewalk clocks, and then I did a ForgottenSlice on some of Manhattan’s attached building clocks, but my ambition in this regard has so far outstripped my abilities — I want to do a survey of every public clock in Manhattan, and that will take a massive amount of research that might involve walking every block in the borough — a task already accomplished by ForgottenFans Mike Epstein and Caleb Smith.

In April 2009 I was shambling around the Yorkville area, between 3rd and York Avenues in the low East 80s, when I noticed an inordinate amount of old school clocks, freestanding and attached, in the same general area. Yanking the camera out of the bag… 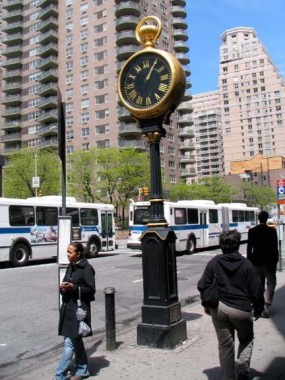 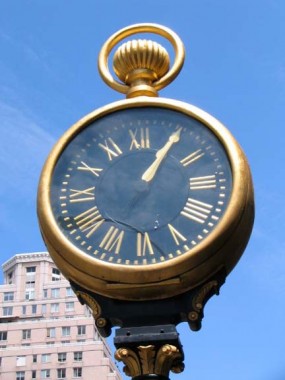 The Yorkville Clock at 1501 3rd Avenue and East 85th Street has been here since 1898 — lasting an entire century and parts of two others. Like many other sidewalk clocks it originally promoted a jeweler’s, in this case The Adolph Stern store. It was manufactured by the E. Howard Clock Company, and was designated a NYC landmark by the Landmarks Preservation Commission in 1981. That did not prevent its temporary removal, however — in 1985, a city employee mistakenly sold the clock as surplus to a Long Island collector. The Koch administration tracked it down and by 1989 it was back in service, this time next to a McDonalds. To celebrate its first century in service, in 1999 the pocketwatch-inspired clock received a complete overhaul and has kept perfect time ever since. 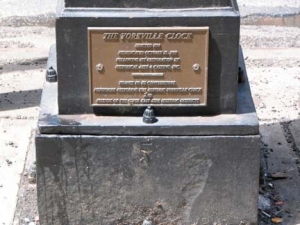 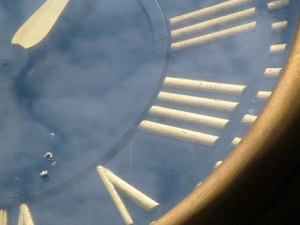 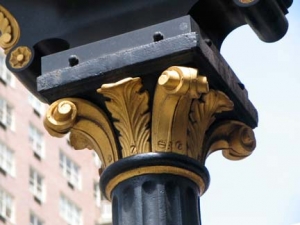 Some more detail of the black and gilded street clock.Note that as with most clocks using Roman numerals, “4” is rendered as “IIII” instead of the “IV” used in original Roman script. Can anyone tell me how this tradition got started?

The most plausible thing I’ve heard is that early clockmakers didn’t want people to mix up the IV and VI, so they substituted the IIII…. 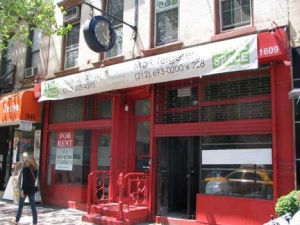 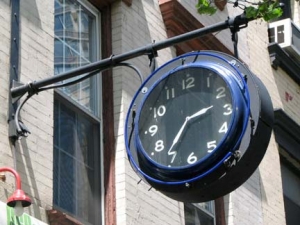 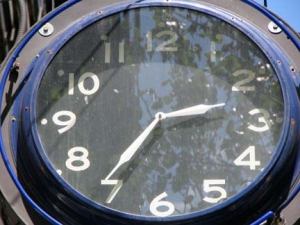 In 2009, 1609 2nd Avenue was seeking a new ground floor tenant, and you’d hope that the new lessee does nothing at all to disturb the wonderfully streamlined black and blue pendant clock. I have always enjoyed streamlined design coupled with a bold color scheme. 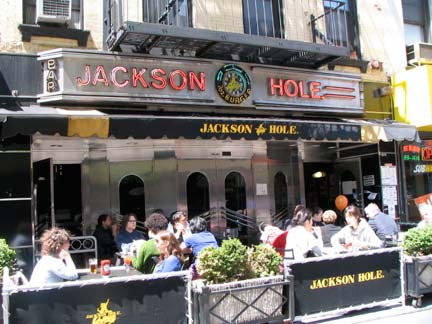 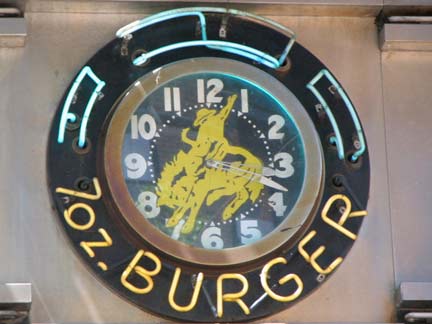 The Jackson Hole burger chain has converted chrome diners in Astoria, Bayside and other locales to branches in the chain. Here at 1611 2nd they have built a chrome-fronted extravaganza with a distinctive clock. I wonder if they sell souvenir watches with the bucking bronco logo. If they don’t, they should. 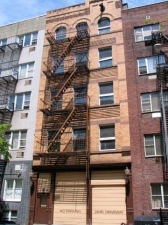 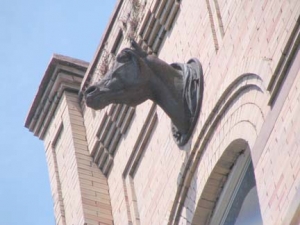 Moseying down East 83rd, I noticed a building at 435 with an especially wide doorway. Looking roofward, the horse head let me know that my suspicion that the building once held a stable was correctamundo. 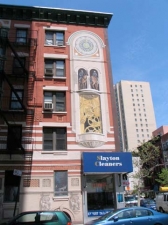 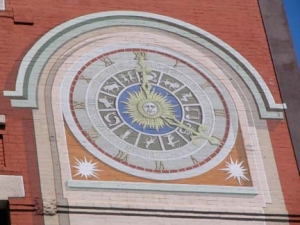 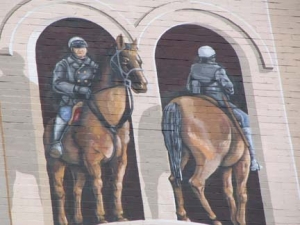 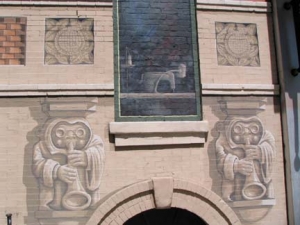 Slayton Cleaners, York Avenue and East 83rd – featuring large murals on the East 83rd side, one of them a faux clock. The huge murals look relatively new — anyone know who did these? 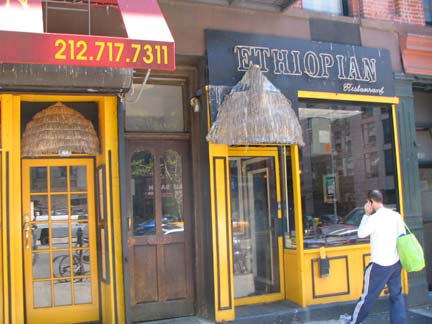 I was a little disappointed with the Logos Books fare — very small NYC section, no ForgottenBook — but I loved the Bodoni font on their sidewalk sign. Across the street, an Ethiopian restaurant has been thatcherized.

[…] it was commissioned by them. They told us they had no idea and were asked all the time about it. Forgotten NY included the mural in a piece on clocks in 2009, wondering if anybody knew who did the work but so […]

Slayton Cleaners, York Avenue and East 83rd is a mural painted by Richard Haas in 2005 in response to the complaint that the 5-floor walkup was an eyesore when the Cielo was being constructed (NY TImes article available on Google). We have a great painted building of his in Chicago on LaSalle St, which reflects the Board of Trade building on the south-facing wall.