Bay Street, one of the few main streets in Staten Island not named Richmond (Hylan Boulevard is another) takes its name from the route it runs on the eastern shore of the island, facing the water, though only the stretch of Bay Street in the vicinity of the ferry is actually in sight of Upper New York Bay. The remainder is closer to the Narrows, a strait between Upper and Lower New York Bays, separating Staten Island from Bay Ridge, Brooklyn. Bay Street is the main street of Tompkinsville (along with Victory Blvd.), Stapleton, Clifton and Rosebank, and along its length you can find vibrant hotbeds, silent towns, historic churches and abandoned theatres. On Bay Street’s stretch nearest the ferry you’ll find Staten Island’s closest approach to resembling the rest of New York City… 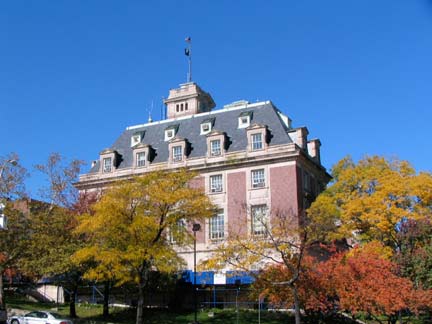 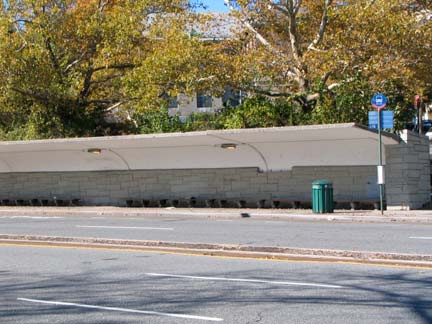 Staten Island’s Borough Hall, where Richmond Terrace meets Bay Street, is the large building that comes up fast when you are riding the front of the ferry from Manhattan, looming behind the ferry terminal. It was designed by Carrere and Hastings and completed in 1906. Its main hall displays 12 murals depicting early Staten Island life painted by F.C. Stahr — check them out if ever are inside. RIGHT: Long before NYC began installing glass bus shelters that are incessantly attacked by vandals, there was the largest bus shelter in NYC, this stone and concrete number on Bay Street and Borough Place. Smash this! 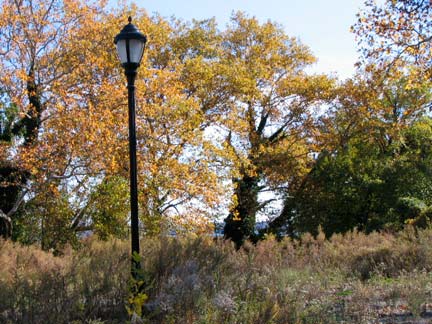 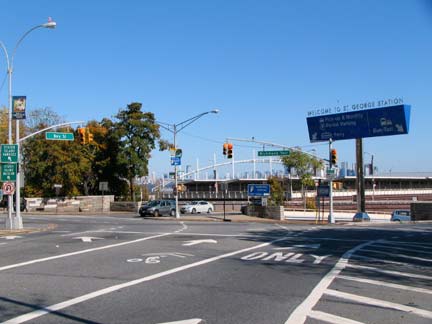 Adjoining the elaborate auto ramps to the ferry (that serve only buses dropping off passengers, since 2001 no cars have been allowed on the ferry) you will find an aged brick wall studded with star anchors that protects … a weed and tree covered yard and the occasional lamppost. This used to be the site of the Chief Physician’s Residence, US Coast Guard, a structure built in 1815. Fill me in on what happened to it — it’s obviously no longer there, but the AIA Guide mentioned it in 1988. A walk down Borough Place will produce some very old buildings, though, in what is billed as the future site of the US Lighthouse Museum, though the ‘future’ designation has been there for quite awhile. TheNantucket lightship that was supposedly a main attraction has been sold and is moving to Boston.

ForgottenFan Etta-Lee Heiman: The Chief Physician’s Residence of the Coast Guard/Lighthouse Station was burned down mysteriously and then demolished in mid to late eighties. There had not been any concerted effort to save and preserve this building. The area was still “Federal Government Property” until it was officially de-commissioned. Also this all happened way before the St. George area was declared an Historic Area in the 90’s. The Coast Guard had moved out in 1966-67 and moved to Governor’s Island after the Army had moved out. The house was beautiful, more like a country estate rather than a farm house. It was painted white with dormers and a open front porch. The gardens were always kept pruned. 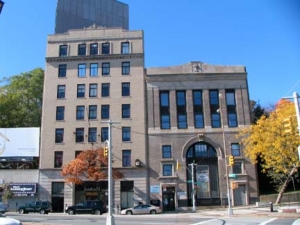 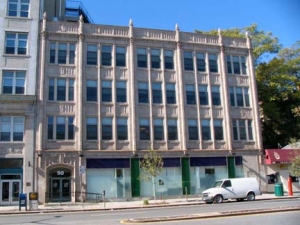 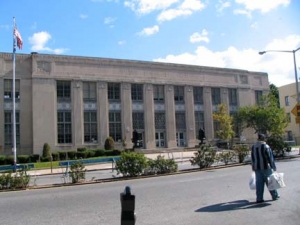 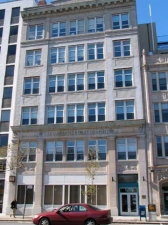 Between Hyatt Street and Slosson Terrace we find several “high rise” office buildings on Bay Street, mostly dating to the Roaring Twenties and Dirty Thirties. I imagine the floors are taken up by local offices and concerns these days. Staten Island’s largest post office, the St. George branch (mid-left) and the former Title Guarantee & Trust Company.

Etta-Lee: The building with the white truck in front of it had originally been Richmond College. Before The College of Staten Island located now on Victory Boulevard in the old Willowbrook Mental Hospital campus [known in its day as just Willowbrook], there was Staten Island Community College [known as Community] located near Clove Road and the SI Expressway. That was a 2 year school with just Freshmen and Sophomores. If you wanted to complete your college and get the full-fledged BA, you attended Richmond College on Bay Street. This was also 2years with just Juniors and Seniors. The picture to the left of the one of “Richmond College” showing a multi-storied office building with a large arched doorway was originally the Corn Exchange Bank at the turn of the 20th century.

The St. George Branch post office building is so large because it was originally the Main Post Office on Staten Island. It’s chief drawback in later years was the lack of parking due to the increase of traffic. [There was a marked increase of traffic due to the opening of The Veranazzo Narrows Bridge, i.e., The Bridge.] So the main post office was moved to a ‘new smaller but more modern building with parking’ built in mid-sixties on Manor Road near Victory Boulevard. 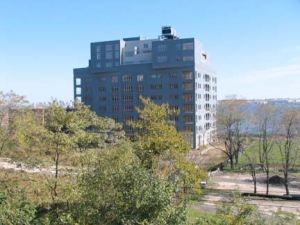 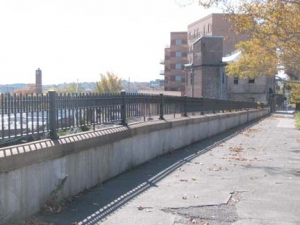 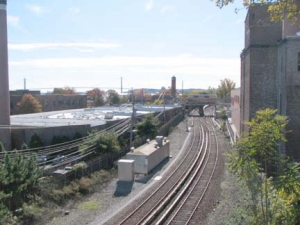 Staten Island Railway (formerly Staten Island Rapid Transit) runs from St. George to Tottenville. Here, Bay Street is at the summit of a high cliff, and a lengthy wall has been built along its length. The SIR runs in a tunnel for a few hundred feet but emerges here.

There would be an excellent view of the Narrows, Bay Ridge, and downtown Manhattan from here, but freight terminals, converted to condos in the 1990s, block the view. 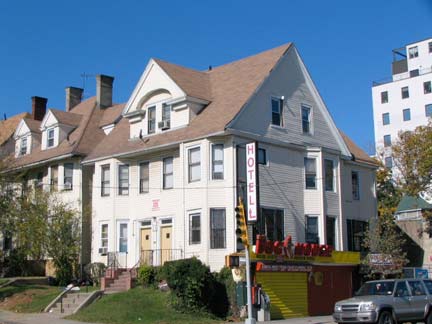 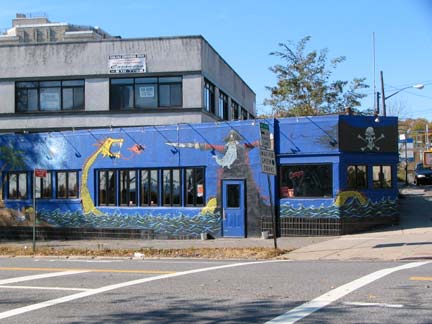 Hotel Slosson and Cargo Cafe, Bay Street and Slosson Terrace. (The RSO hotel is unnamed; I just dubbed it Hotel Slosson). The Cargo has a new look every time I pass by. It was opened in 1990 and has quite a loose vibe — too loose, according to some yelp reviewers — though my meals there have been decent ones. For best service, better to go in the off hours. 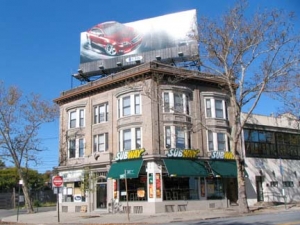 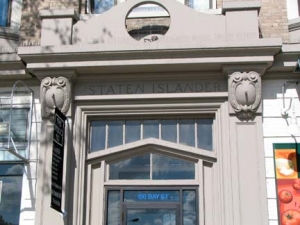 There are some striking examples of premier architecture at Pershing Circle, where Bay Street, Central Avenue and Victory Boulevard all intersect. The Staten Islander was a newspaper. The beautiful brick buildings lining Victory Blvd. west of Bay Street (bottom) called the Baltimore Flats, date to 1885. For many years the corner building was sheathed in ugly metal cladding — it looked like a prison!

I am Richmond College ’76. The building on Bay Street held only a couple of administrative offices when I went there in the early -mid ’70’s, and was, to the best of my recollection, abandoned by the time I graduated in ’76. The classrooms, offices & cafeteria were located on two (or was it three?) floors of the office building that is located at 120 Stuyvesant Place. The rest of the building was occupied by ATT, or NY Telephone, or whatever it WAS that year. In the Fall of 1975, they opened the “annex”, which was a brand-new, brick-faced building located next door to 120 Stuyvesant, and on the same side of that street.
I recall that the parking situation on Stuyvesant was always “iffy”, and, if you parked on Stuyvesant across from the entrance to 120, you could find yourself in the middle of a “prisoner parade” all around your car. It was the rear entrance to the courthouse, where the prisoners, cuffed & hobbled, would be brought on and off the bus for their appearances.
Farther north, and on the water side, of Stuyvesant, was my favorite pre / post / intra-class hang out: “Montezuma’s Revenge” (tortilla chips, tacos, sangria and Paella! Paella took 45 minutes to arrive at the table, so, if you wanted to have it ready in shorter order during a break between classes, you had to dash across the street, pre-pay, and let them know what time you’d be back…. It was “the only show in town”, and it WAS delicious! Somewhere in the late ’70’s they moved around the corner, on north side of Wall Street, changing their name to “The Cave of the Wolves”….Fine table linen, heavy silverware, candles & soft music…double the price, and with an expanded menu….and the always-excellent food. That lasted several years, until, one day, it just vanished…. Still farther north, going down Stuyvesant, was the always-disappointing Museum of Staten Island, with their dusty “class-trip” shell collection that occupied nearly half of their 993 square-foot space…. I went back there a few years ago when they hung one of my old family photos of a then-and-still defunct Staten Island “Forgotten” place: the Spanish Camp. Here’s my Spanish Camp gallery, if you’re interested: http://www.pbase.com/jchiarella/spanish_camp&page=all. I understand that the S.I. Museum has recently expanded into the old courthouse…..Excellent news!

The Staten Island Museum wasn’t so bad. I was born in 1948. When I was in grammar school, the museum ran Summer programs in their basement, which included clay sculpting, films and S.I. History, including background on the Lenape indians.

AAAAAAHHHH! Montezuma’s Revenge! I was a Curtis H.S. student when it opened. I had a split session. Strangely, I had only two periods in the second session. They were “Study Period” and “Lunch”!!! Stranger still, they did not have my Delaney card in the Study Period. So, I left the building, strolled down Stuyvesant, walked right past the Stuyvesant Sweet Shop (where other students hung out) and went straight to Montezuma;s Revenge. I would order my ‘lunch’ complete any homework assignments while waiting for my food. Have a leisurely 3 course lunch and go home to whatever I wanted to do for the rest of the day. Gad, how I do miss those days!!!!

I remember going to Montezuma’s Revenge as a child with my parents. They would lock the door and the party began…fun times!

I remember Montezumas Revenge back in the 70’s. Great food and alot of fun. Miss those simpler days in NY and on the island.

The “Baltimore Flats” continued on the other side of Bay St. along lower Victory Blvd. I had friends living there. So if memory serves, there were three identical double buildings of several stories each, followed by a small warehouse building which also housed the commercial services station of AAT Electronics which was based at 1854 Hylan Blvd. For your information, the ugly sheathing for the building at Victory and Central Ave was done to accommodate the Snelling & Snelling Employment Agency which occupied the building in the late 1960’s and early 1970’s. The last tenant that I remember was a “school of business” for which I’m sorry I don’t immediately remember the name.

My father was a career officer in the USCG. Rather than live on Governor’s Island, our family was assigned the Physician’s home (I thought it had been the Admiral’s Quarters) at 3 Bay Street from 1973-77; another family lived in the adjacent home (5 Bay St). The base was abandoned.

It was a huge, gorgeous old home. We were the last to live there; it was also abandoned, after we moved. I went back a couple years later and was dismayed to see it in such disrepair; even more discouraged to see it had later been razed, along with 5 Bay. I didn’t realize it’d burnt down as well. There’s very little of the brick wall and iconic iron stars even left. I have a photo somewhere of the house…

40 years later I’ve begun trying to research the history of the house. Our family, and many visitors, experienced what seemed undeniable “hauntings” there. My logical father couldn’t even explain incidents. If you know anything more about the house, I’d sure appreciate hearing. We have many happy memories there, if nothing else. If Mom was still alive I’d tell her you appreciated how well she kept the grounds 🙂

I don’t mind having my email published here in case any other readers may have more information. Thanks for the information you made available.

The murals inside Borough Hall must be seen to be appreciated. They are haunting.