On the outskirts of Chinatown and Little Italy (the two Manhattan neighborhoods bleed into each other), at Centre and Grand Streets, stands one of the oldest examples of the oldest working variety of NYC lamppost, the bishop crook. This particular specimen is classified as a Type 1BC, recognized for several archaic elements that later Crooks dispensed with, and it’s one of just three Type 1BC’s still in active use on NYC streets. Another is just ’round the corner on Canal and Lafayette, the other downtown on Beaver Street west of Broad. Unlike the new crooks that keep popping up around town, this one displays its age with an exquisite display of rust…. 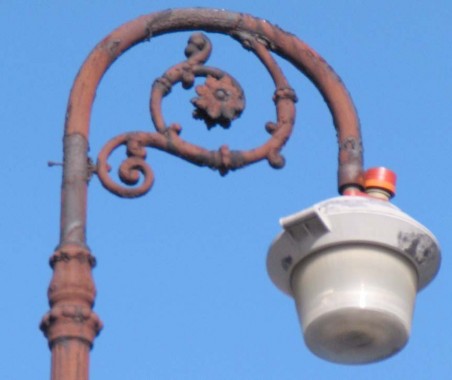 The NY Times’ Christopher Gray: According to the historian Henry Hope Reed, the Bishop’s Crook lamppost was designed in 1896 by Richard Rogers Bowker, an Edison Company executive, and it went up on Broadway and some other major avenues, often exactly at the corner, pointing diagonally into the intersection.

I’m never sure, with NYC’s older lampposts, whether I’m dealing with wrought iron or cast iron, which are two different things. Suffice to say that this simple scrolled bishop crook design, which is now close to 115 years old, is probably one of the oldest extant lamppost deisgns still being produced: the city began repopulating the streets with Bishop Crooks begining in the 1980s, using recast molds of this same design. Excuse the blurry picture, as my camera is temperamental on tight zooms like this.

This post likely is over a century old by now, and has held many electric luminaires over the years. In the 1980s it received this utilitarian sodium-light item, which casts a bright yellow light. No new Crooks that are going up today get these; they receive one variant or the other of the bell-shaped luminaires that first appeared in the 1940s. In contrast to earlier acorn-shaped luminaires they cast light straight down and may have been a response to World War II blackouts in which lamps were dimmed or turned off to drill for any German invasion. 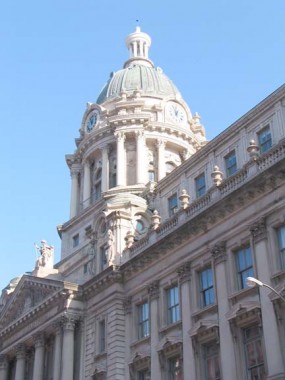 The former NYC Police Headquarters, now Police Building Apartments at 240 Centre between Grand and Broome, and our Bishop Crook across the street at Centre and Grand, come from the same Beaux-Arts era from 1890 to about 1920. While not all Beaux-Arts buildings were public buildings, both of these structures embody the philosphy then espoused that our public buildings, and even our public utilities, should be beautiful; and so they are covered with ornamentation and even some archaic elements that modern-day architects would find wasteful and hardly cost-effective. 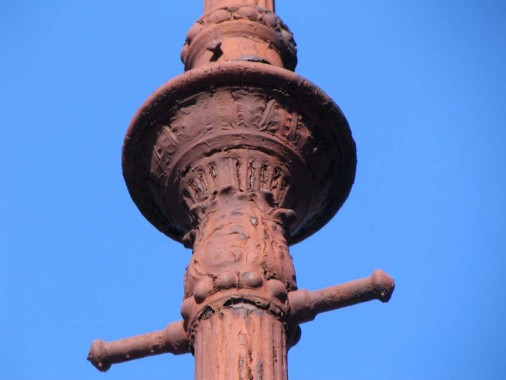 On the Crook, note the crossbar structure on the shaft. It is an archaism and served no function even when it was installed a century ago. It is a tribute to the gaslight posts it was meant to replace, when the ladder used by the gas lighter (evenings) and extinguisher (mornings) would have to rest on the lampposts shaft. In the earliest versions of the Bishop Crook, the ladder rest motif was continued. Rust has worn down a century’s worth of formerly intricate detail. 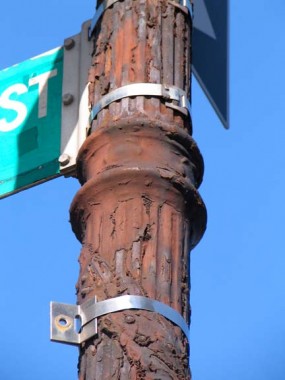 Another look at the Centre Crook’s exquisite rust. 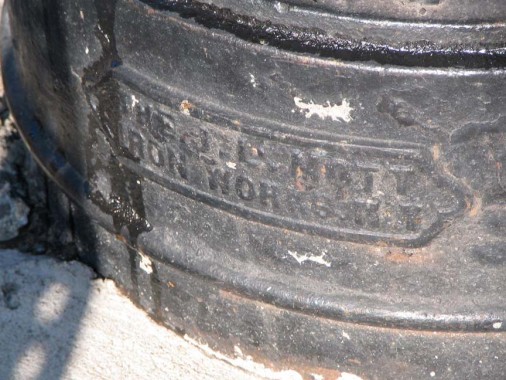 Older lampposts are emblazoned with a nameplate featuring the “J. L. Mott Iron Works.” This is the very same Mott that lent his name to the extreme south Bronx’ Mott Haven:

The J. L. Mott Iron Works was established by Jordan L. Mott in New York in the area now called Mott Haven in 1828; the business was continued by his son, J.L. Mott, Jr. The elder Mott’s inventive genius was applied to the manufacture of cooking-stoves fueled with anthracite coal. “Stoves and ranges, hot-air furnaces, parlor grates and fenders, fire irons, cauldrons and kettles, statuary, candelabra, fountains garden seats, vases, iron pipes or every kind, water tanks, &c” are mentioned in Benson John Lossing, History of New York City. Mott was interested in the patenting of inventions, but turned down President Buchanan’s offer to make him Commissioner of Patents.

The company relocated in about 1902 to Trenton, New Jersey. wikipedia 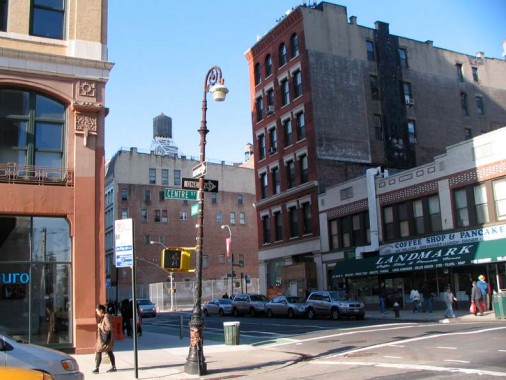 You never know when one of these rusty classics will be carted off by the Department of Transportation. Catch it while you can!

THANK YOU FOR YOUR SERVICE Retired line designations Page 2

A post of a similar type lies on Walker Street in Manhattan between Broadway and Church Street.

there are 2 of these in Farrockaway

I write a blog about cast iron drinking fountains – not specific to New York but you might find it interesting. https://memorialdrinkingfountains.wordpress.com/